The Danish Army of the Napoleonic Wars, Part 8: Artillery

Organization of the Danish Artillery

The Danish artillery was drawn from the following sub-units

* The Danish and Holstein Artillery Battalions were added in 1808, when the militia were disbanded. they evidently initially manned only coastal defense guns.

Each artillery company (battery) had 160 men and manned eight field guns and two howitzers. The types of batteries were distributed roughly as follows in 1813:

Evidently 2 Rocket batteries were also formed in 1813, but saw no combat.


Uniforms of the Danish Artillery

Headgear was a hat similar to the infantry from 1801 - 1807, with a white plume. here is a picture of this uniform in the NYPL collection here. Artillery Officers wore a black bicorne with a white plume; gold tassels at both ends of the bicorne. In 1808, a black shako was adopted, without cords or plaque. There was a dark blue short plume on the shako, however. Black chin strap.

The uniforms of the Horse Artillery were essentially the same as that of the Foot Artillery with the following minor differences: The dark blue pants had a double red stripe down the outside seams. White or buff gloves were worn. From 1808 on, a black shako was worn. This had a white plume, a brass plate bearing the letters "RA" (for Ridende Artilleri) on the front, and red mixed with yellow cords (crimson mixed with gold for officers).

I have read elsewhere that the Danish field artillery had grey carriages. However, the Tojhus Museet lists them as red with the metal fittings painted yellow. It is possible that may only apply to the Fortress artillery, however T. Snorasson also states red carriages with the metal fittings painted yellow in his article in Tradition #53. So, I personally went with the more colorful option... but of course!


On to some pictures: 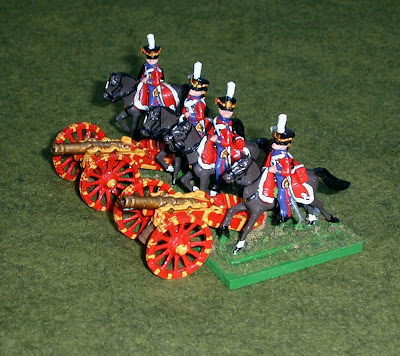 Danish Horse Artillery. Note the red mixed with yellow cords on the shakos - classy! Both the crew and gun models s are 25mm Minifigs. 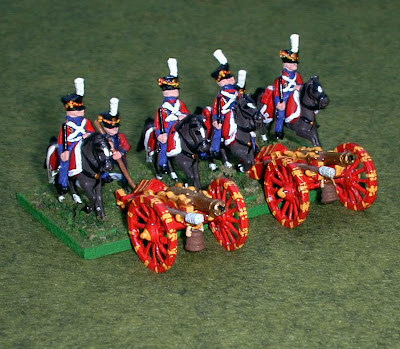 The bright colors wouldn't be too out of place at Tivoli gardens in Copenhagen. Even if the famous amusement park didn't open until 1843, it was the second in the world (the first was also located in Denmark!). Recent surveys have placed the Danes among the happiest people in the world... despite the very, very short daylight hours in winter. 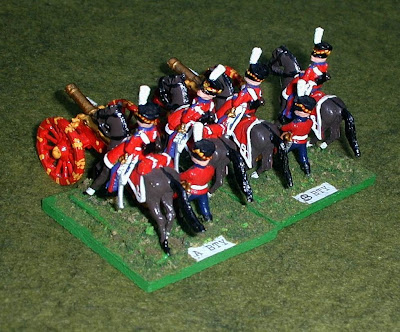 I have assumed, perhaps incorrectly, the same pattern and colors of saddle cloths as for the Light Cavalry. 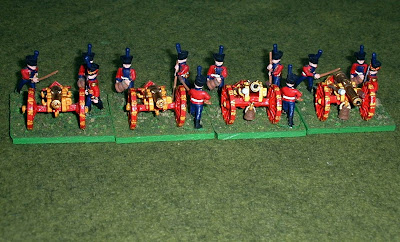 Danish Foot Artillery - the red and yellow gun carriages do dazzle the eyes! 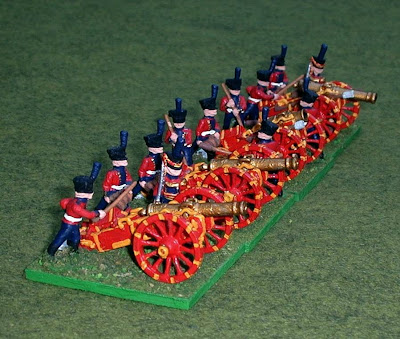 The minor change to a plain black shako with dark blue plumes makes these fellows look more somber than their mounted fellows! 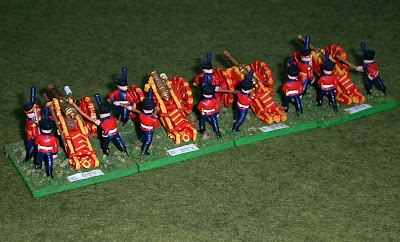 If the carriages really were painted red, it may have been  much darker "Iron Oxide" shade, as is commonly seen on barn siding and Renaissance era artillery carriages.

The next post in this series will cover the uniforms of Danish generals.