Prior to the debacle of 1806-1807, there had been a single large (8 squadron) Uhlan regiment in the Prussian army. With the reorganization of the (much downsized) Prussian Army following the Treaty of Tilsit in 1807, these troops formed the nucleus of the two new Uhlan regiments, the 1st and 2nd. Major von Schill's unauthorized and unsuccessful raid in 1809 lead to his regiment, the 2nd Brandenburg Hussars, being disbanded. In its place, a 3rd Uhlan unit, the Brandenburg Uhlans #3 was raised. Five more Uhlan regiments were raised for the 1815 campaign.

All the units wore essentially the same uniform, the regiments being distinguished only bu the color of their shoulder straps (and later, their buttons). Although a dark blue Litewka coat was an option for campaign dress, the Uhlans generally wore their "Kollet" jackets, which had red pointed cuffs, collar, and turnbacks, as well as a red stripe of lining showing on the outer edge of the reversible lapels (for parade wear, they were buttoned with the full red lapels showing). A blue and red lancer girdle was worn as well. 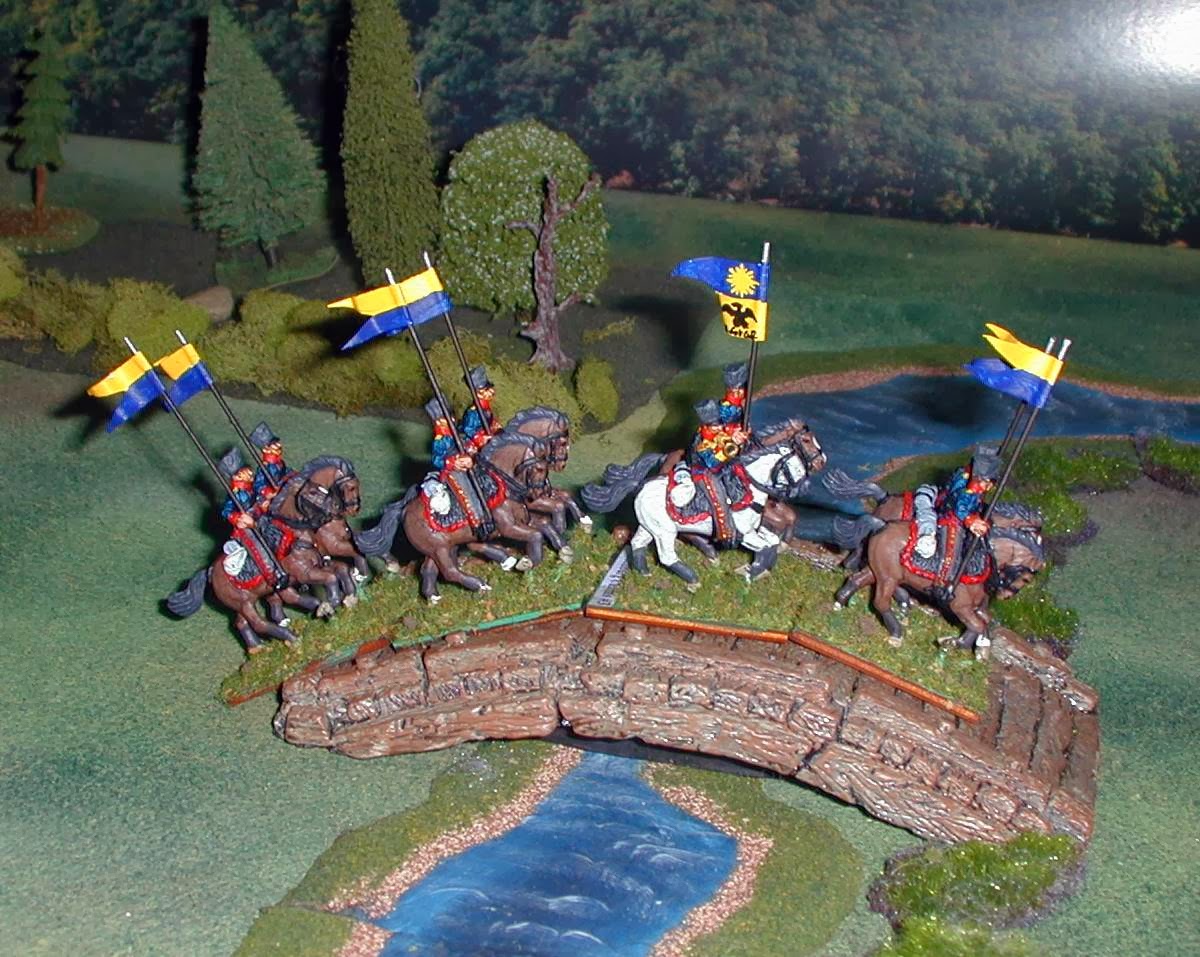 This colorful unit is the Brandenburg Uhlan Regiment #3, with their yellow over blue lance pennons. The 1st regiment had white over blue pennons, and the second red over blue. In March, 1815, all regiments, including the new raised ones, were supposed to switch to white over black... Boring! 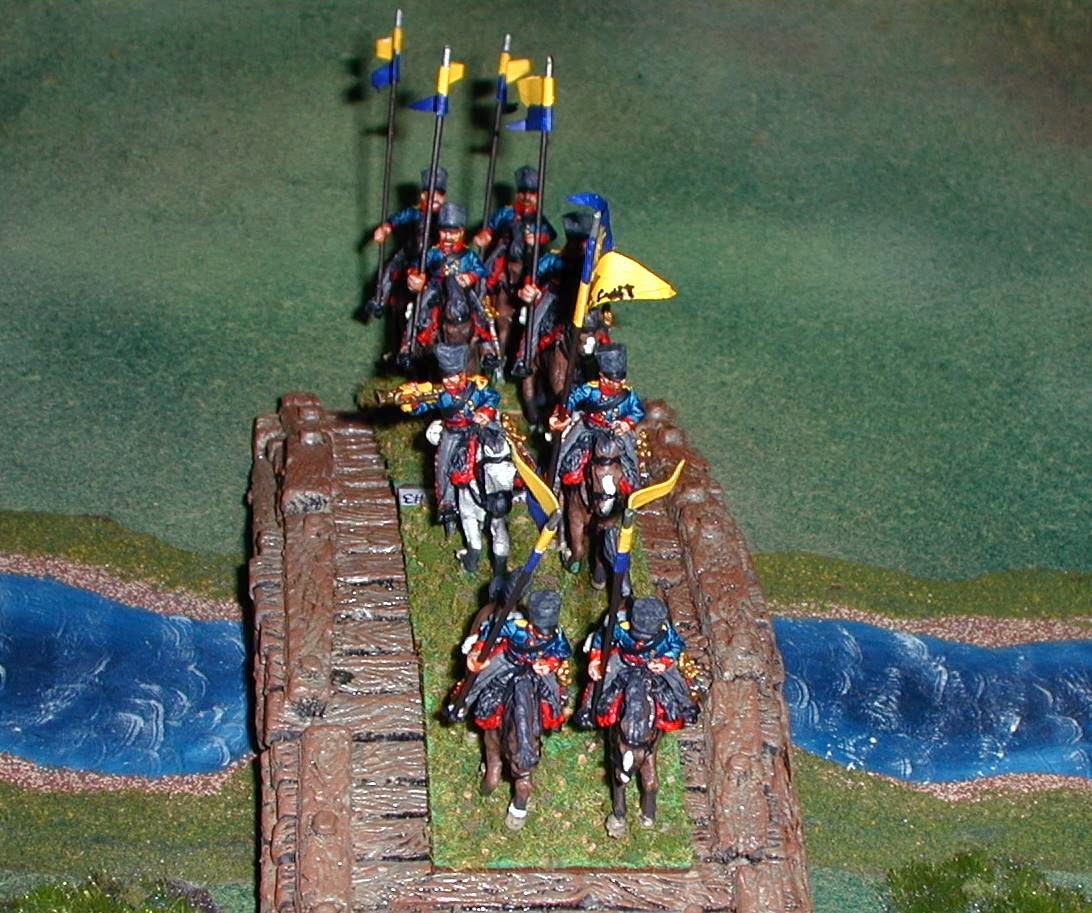 The trumpeters of all regiments had red shoulder wings with gold lace, but for some reason did not have the red plumes common to other Prussian musicians in full dress. These lovely castings are Perry figures. 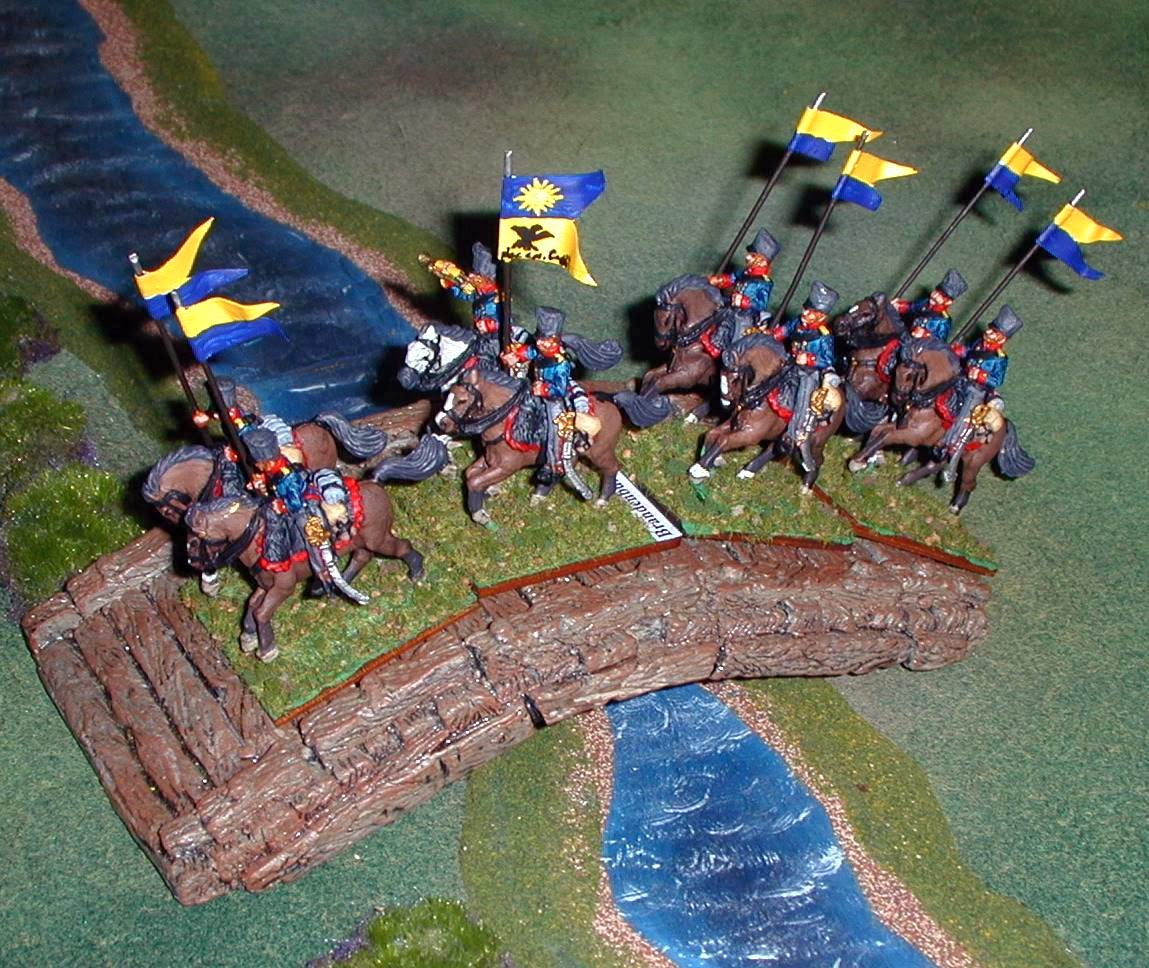 As a regimental tradition, the officers of the Brandenburgisches Uhlanen Regiment bore white lances larger pennons than the men, in reversed colors (i.e., blue over yellow instead of yellow over blue), with the blue upper  half bearing a yellow son, and the bottom (yellow)half a black Prussian Eagle with the motto "Nec Soli Cedit" below it. This was the motto of Frederick I of Prussia, and translates roughly to "he yields not even to the sun", a reference to the Sun King, Louis XIV, who ruled France from 1638 - 1715. A rather peculiar anachronism. Perhaps it was a way expressing anti-French sentiments without being directly offensive to Napoleon or the Empire? In any event, the custom was abolished in 1812... at least officially. As this is too choice a bit of military "bling" to pass up, and the lancers didn't carry standards, I have depicted the officer with the offending special pennon, but without the white lance... presumably in an attempt to evade censure by the army regulation "police"! 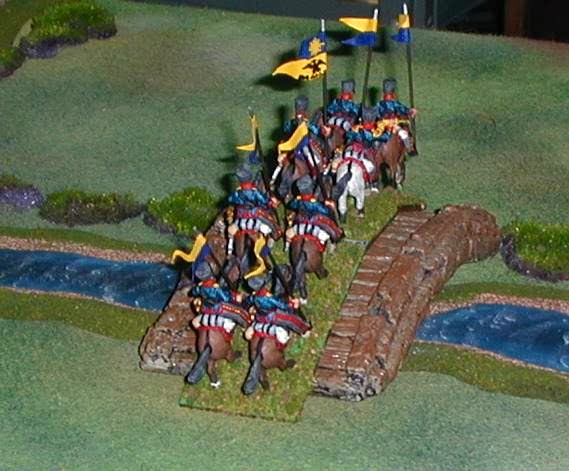 If the shako was not worn with its oilskin cover, it had yellow cords and, for full dress, a tall black plume. Only the Leib squadron (which later became the Guard Uhlans) wore a czapska. Standard Prussian cavalry overalls, grey with a red stripe and buttons down the outside seams, were worn. 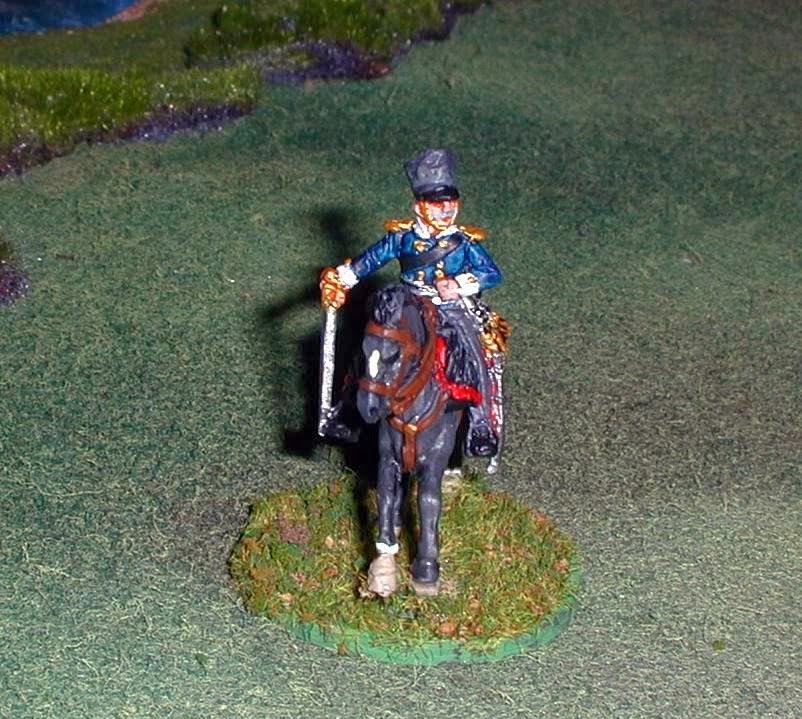 This spare Uhlan officer I have painted up for use as an infantry Brigade commander. 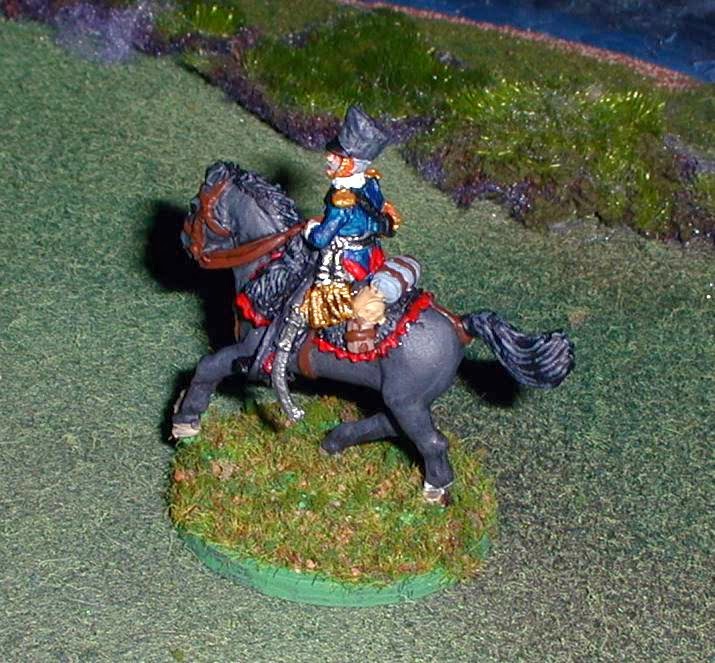 Evidently he must be a colonel of a Pomeranian regiment (white collar and cuffs), jumped up to fill a temporary command vacancy. 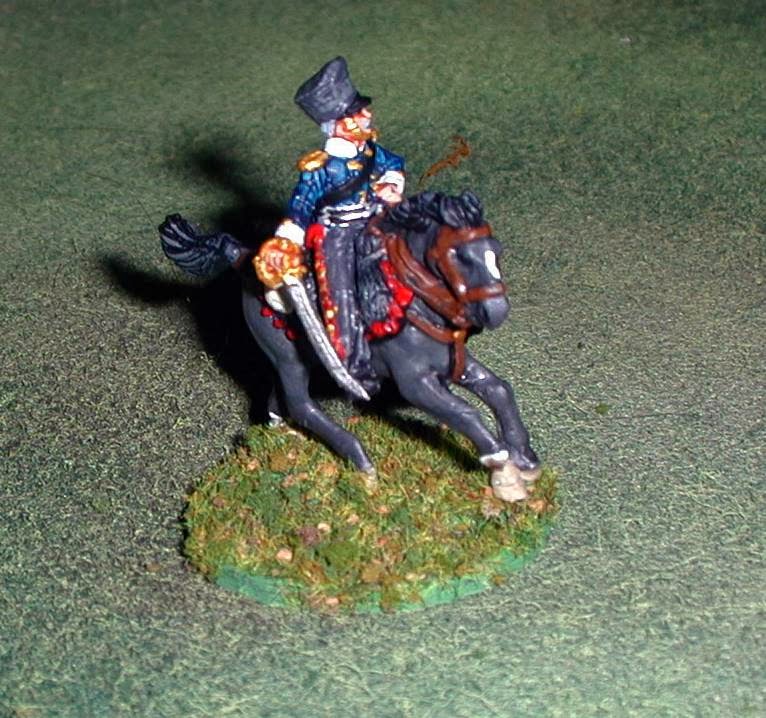 He wears the silver mixed with black sash common to all Prussian officers. 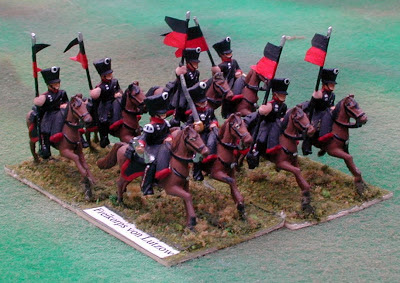 The Kongliche Preussusisches Freikorps von Lutzow, usually know as "Lutzow's Frekorps", was raised in February 1813. It included 3 battalions of infantry, each of 4 companies; 1 company of the 3rd battalion were Tyrolean Jagers!  There was one battery each of foot and horse artillery, and five squadrons of cavalry, ultimately 2 each of Husars and Uhlans, and one of Mounted Jagers.  These figures are part of a large group of old Minifigs that Joe passed along to me a number of years ago when I started my Prussian army with another set of Prussian Minifigs purchased nicely painted (and very unexpectedly) from Jamie W. at Historicon 2003.  They underwent modest rehabilitation to form a unit that can at least pass for the cavalry of the Lutzow Freikorps. They look a bit like Brunswicker wannabees, eh? All but the Tyrolean Jager company of the Freikorps wore black coats and pants. The Uhlans had red piping on the collars and cuffs and down the outside seam of the pants. All belts were black, and the Uhlans reportedly wore black leather gauntlets as well! Black over red lance pennons were carried, as seen above.

Peter
Posted by Gonsalvo at 9:14 PM