Yesterday we had a great day of gaming, hosted by Jared at the Hackley School in Tarrytown, NY, where Jared teaches history (and runs a game club).  Attending were Jared, myself, Ed from Nebraska, who is doing an internship in New Hampshire, and drove three hours drom there to meet me in Bridgewater, from whence I drove us another hour to the school, and three of Jared's students and Game Club members. The first game on the agenda for the day was a Franco-Prussian battle using Field of Battle, 2nd edition rules.

One of Jared's students had done a senior project focusing on the Franco Prussian War, and he and Jared will be giving a presentation at the Historicon War College on Saturday at 10 AM. I will let Mr. Fishman speak more about it:

“Each year, Hackley seniors are asked to complete a culminating project, usually lasting about 4 weeks or so.  When the project is over, they are then asked to go in front a panel of Hackley teachers to complete a final presentation.  They must also choose a mentor teacher (me) who will guide them through the process.
In Dillon’s case, he chose to create a gaming project centered around the Franco-Prussian War for use in Hackley’s game club for years to come. He had a hand in all decisions, including scale, figure manufacturer, rules, etc.  Dillon researched the period, helped paint figures, rated units, thought about and designed the scenario, and assisted in playtesting.
Finally, and this is a real testament to who Dillon is as a person (and a huge nod to the benefits of this hobby and the kind of motivation it creates), despite having already graduated, he is devoting a huge chunk of his summer to playtesting, culminating in our game at Historicon.  We will then, together, run the game for Hackley students in July.
If you’re at Historicon and want to see the project on action, our seminar is on Saturday morning and the game itself is at 3 pm.”


Here are the relevant event listings from the Historicon PEL:

“Historical Gaming in the School Classroom: A How to Guide from both the Teacher and Student Perspective” Speaker: Jared Fishman Location: Conestoga Room Description: Since 2008, the Hackley School in Tarrytown, NY has been a model and leader in terms of historical gaming both inside and outside the classroom. This seminar will focus on how the game club started, why it is valuable, and more importantly, the benefits of other schools adopting a similar model. Teacher Jared Fishman and student Dillon Schaevitz will share their experiences and run a game based around the Franco-Prussian War later in the day.

S15:327 Pickelhaube and Kepi- A Franco-Prussian War Clash Saturday, 3:00 PM, 4 hrs, Players: 5, Location: Commonwealth: CW-13 GM: Jared Fishman Sponsor: None, Prize: None Period: 19th Century, Scale: 10mm, Rules: Field of Battle 2 Description: The time is September, 1870, with two of the great European powers clashing to see who is the new needle mover on the continent. Will the Prussian advantage in artillery rule the day, or will the French elan and fighting spirit be able to carry the day? Rules are Brent Oman's card based Field of Battle, with scenario designed by members of Hackley School Game Club. 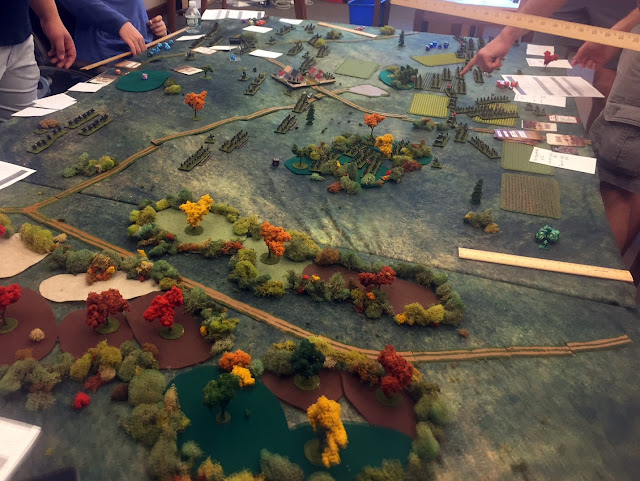 A ways into the game, following some effective Prussian (right) bombardment of the French defenses (left), taking advantage of their numerous and better artillery. My command is safely under cover in the woods, making use of same to approach the French defenses whilst minimizing casualties from the superior French small arms fire. 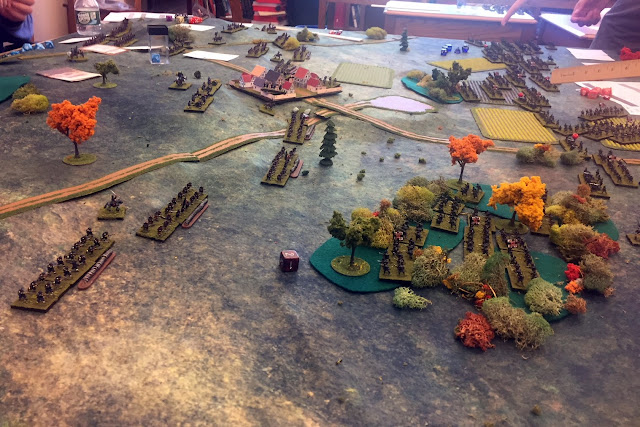 A closer view; the French are defending a ridge line and village, with many of the front units "dug in".  Once again, that's my Division's infantry in the woods, with my artillery and a supporting infantry unit nearby. 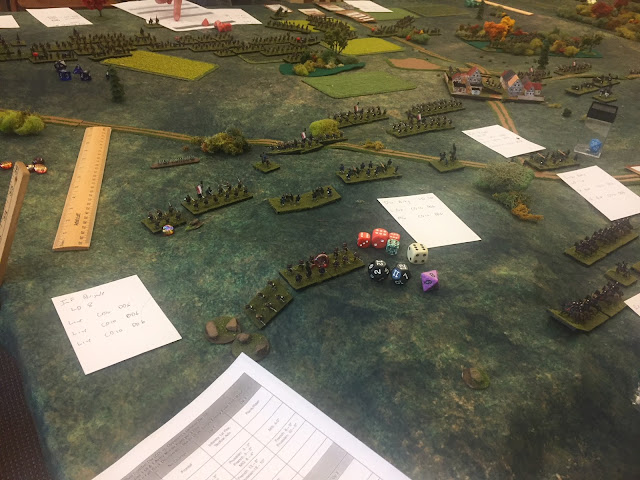 Empty French trenches, and a "routed with no UI " French unit that formerly occupied them! 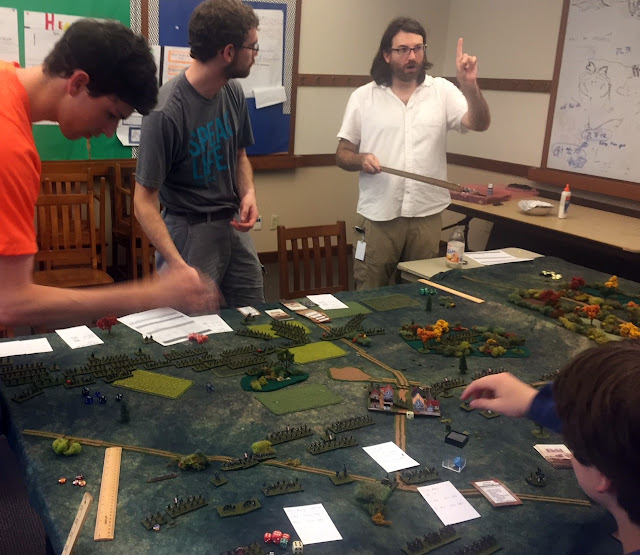 Jared explains some fine points of the rules, while Ed listens attentively, this being his first game with the Field of Battle rules. 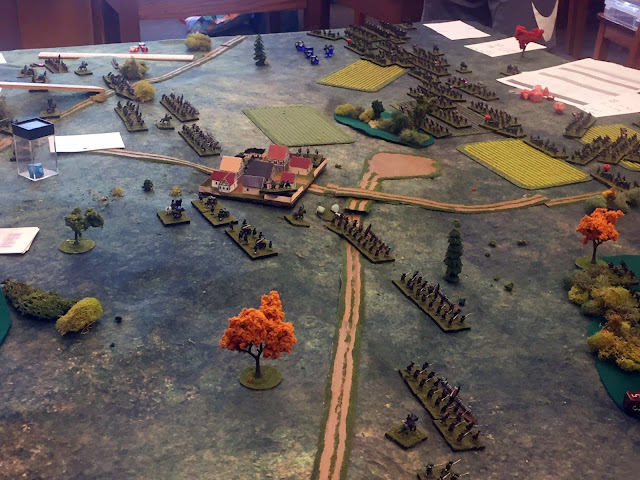 Close up of the French defenders, as casualties mount from the fire of the Prussian Krupp guns. 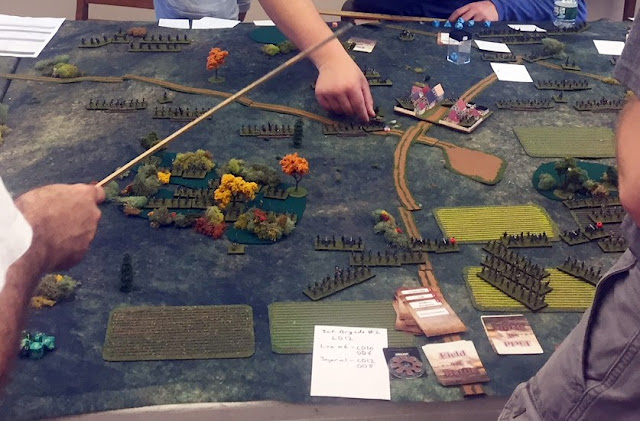 Another French unit is driven back from their hasty trenches.

Not long after this, my Division made use of a "triple Magic Move" to launch an all out assault on the three right hand French defenders. My skirmishing Jagers proved hard to hit, but their return fire was very effective, driving the French from another of their forward trenches. My other two attacks were repulsed, as expected, but then my additional troops moved to the attack, and things went poorly for the French from there. Not long thereafter we called the game, as we had learned what we set out to. The rules gave very historically plausible results, but as a game, the numbers and  power of the Prussian artillery was too great for the French to have a reasonable chance of prevailing. The group discussed a number ideas to address this without detracting overly from the historical realities, and at least one more playtest is anticipated before the game next week.

I would add that the fighting was very hot... not just on the tabletop, but in the game room itself, the school's air conditioning understandably being off for  energy savings on a summer Saturday when there were no students in attendance. It reminded me of my own gaming back in High School, which mostly took place in the un-insulated attic of my parent's house - broiling hot in summer, literally freezing cold in winter. Then as now, we were having such a good time that the climatic conditions were only a minor distraction from the fun and tabletop action!
Posted by Gonsalvo at 8:15 PM