2nd Battle of Berg Isel, May 29 1809: Scenario and play test for Historicon

After the Franco-Prussian game Saturday, we shifted countries and eras to play test my revised scenario for this battle, with changes inspired by the version Michael Hofer developed for his scenario book, "Blood along the Danube, 1809". I used Badeners as stand ins for half of the Bavarians (I was already using almost all that I own) , and I used Landwehr and Freiwilliger as stand ins for the Tyroleans of Reisenfells command,  and substituted Spechbacher for Teimer, and moved Teimer to the other side of the table (a map reading error). With those caveats, here we go:\

Background: After retaking the Tyrol, believing the rebellion largely crushed, Wrede's Division was withdrawn, ultimately to fight at Wagram a little over a month hence. This left just Deroy and his 3rd Bavarian Division, with assorted attachments, to hold the Rebellious province. It would not prove enough. On May 25th, an attack was launched on the outskirts of Innsbruck by some 6,000 Tyrolean insurgents supported by 1200 Austrians. Their attack was repulsed, and the combat terminated by a heavy rainstorm. However, 4 days later, the numbers of insurgents in the area having swelled to 12,000, the Tyrolians attacked again with their main force at Berg Isel, while additional detachments seized the bridges over the Inn at Volders and Zirl.

Map: Mount Isel and the foothills of the Alps are wooded Class III mountainous terrain; they are impassable to Artillery (except the Tirolese wooden guns) and cavalry. However, all Tirolese (but NOT the Austrians) treat these as Class II terrain for movement.
The River Inn is unfordable, while the River Sill is a Class II stream. The buildings of Innsbruck, part of which is shown on the map, are Class II. The Abbey and Schloss have been fortified by the Bavarians and are Class III Terrain.

Scenario Rules:
Tyrolean Scutzen represent partisans armed primarily with firearms and largely lacking bayonets, etc. They will count as armed with Rifles, however! They must be deployed in Skirmish order or Line formations only, and are DOWN 1 additional in Melee. They have only 2 UI per unit.
Tyrolean Landsturm represent peasants armed with polearms and spears and a few antiquated firearms. They must be deployed in Attack Column or Line and are Up 2 additional in Melee, but Down 1 for fire. In addition, they suffer no penalty for being charged by Cavalry frontally. They have only 3 UI per unit.
Tyrolean Wooden Gun moves like Tyrolean infantry (including in Class III Terrain), but must “limber” and “unlimber, and reloads on the Artillery Firepower cards. It has but 1 UI.
Andreas Hoffer, an Innkeeper by trade and the heart and soul of the Tyrolean revolt is UP 2 on his LD when attempting to rally any Tyrolean troops.
Joachim Haspinger, a charismatic red-bearded Capuchin priest, Makes any unit he is attached 2 Up 2 in melee; however, if he has been engaged in a melee since the last Army Morale Card, he will roll a D12 instead of a D20 for being hit.
If any of the four buildings of Innsbruck proper are occupied by enemy troops, the Bavarians lose 1 Morale Point for each such building, for as long as the building remains controlled by the enemy.

Deployment: As shown on the map.

Victory Conditions: The game ends after the 9th Austrian MOVE card is played and acted upon (nightfall). If the Austrians have un dispuited control of Berg Isel, or the Tirolese control any of the 4 buildings of Innsbruck, AND their opponent fails Army Morale, they score a Major Victory. Otherwise, if the enemy fails Army Morale without accomplishing the above results, it is a Minor Victory. Any other result is a draw. 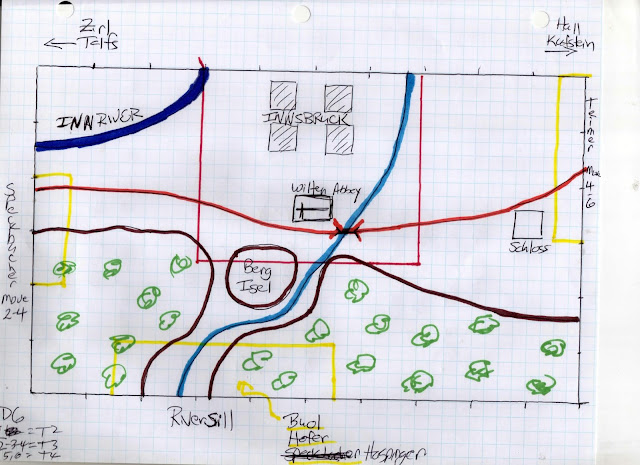 After the play test, I am going to move the set up for the Bavarians back 3" so that they start outside the Class II terrain. 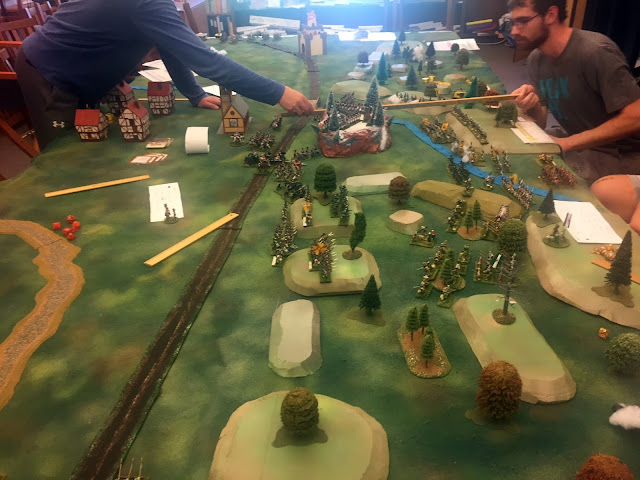 Early in the game - Innsbruck to the right, Berg Isel in the center. 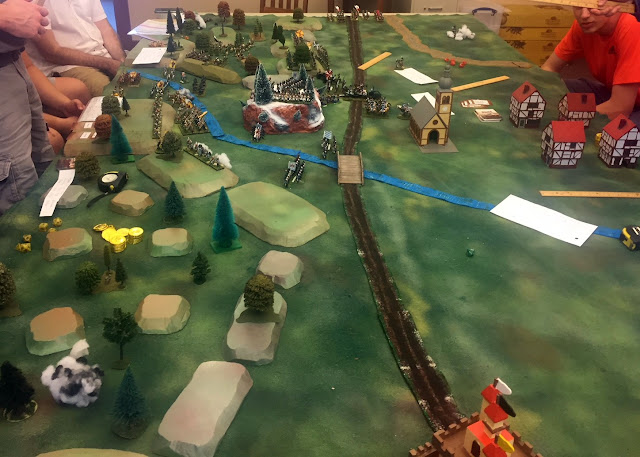 A view from the opposite end of the table. 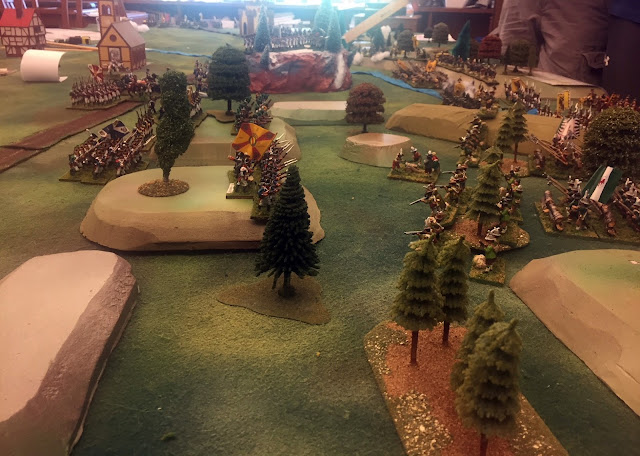 Tyrolean Rebels under  Hofer swarming through the rough terrain. 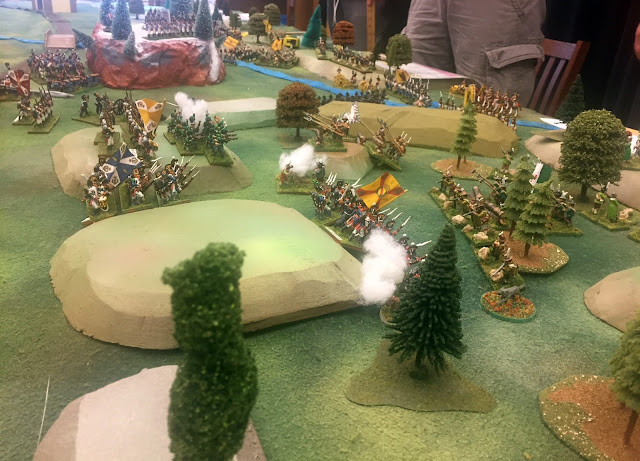 The Bavarians (Badeners used  as stand ins for half of the Bavarians) are surprisingly aggressive in taking the battle to the Rebels! 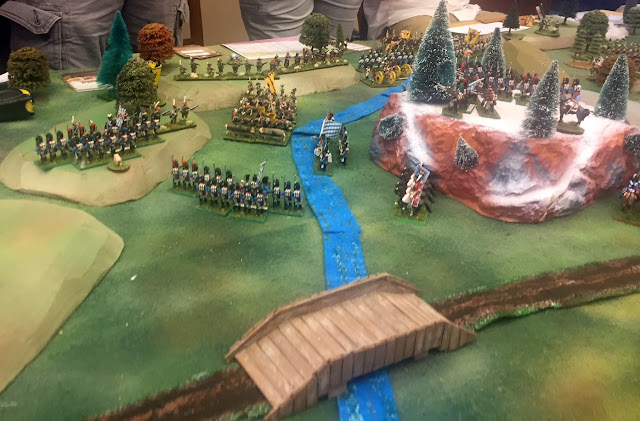 More action on the other side of Berg Isel. 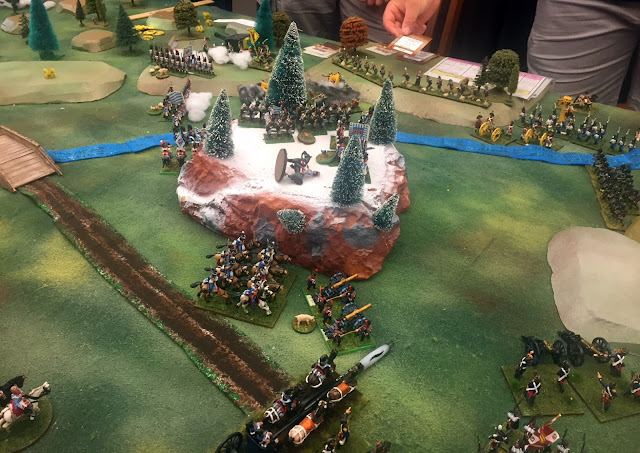 Artillery deployed to make the most of limited fields of fire in the center.  Bavarian General Vincenti is hit on Berg Isel. 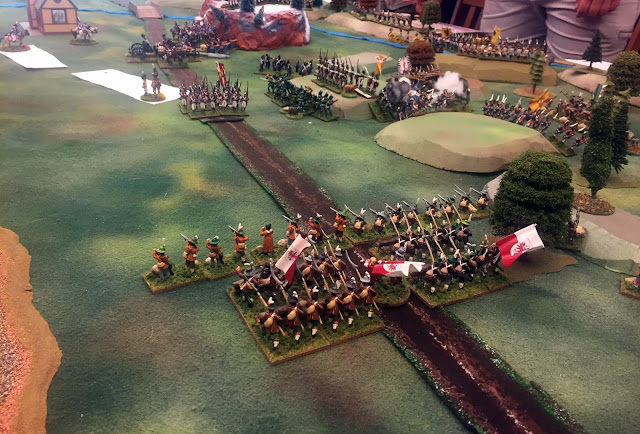 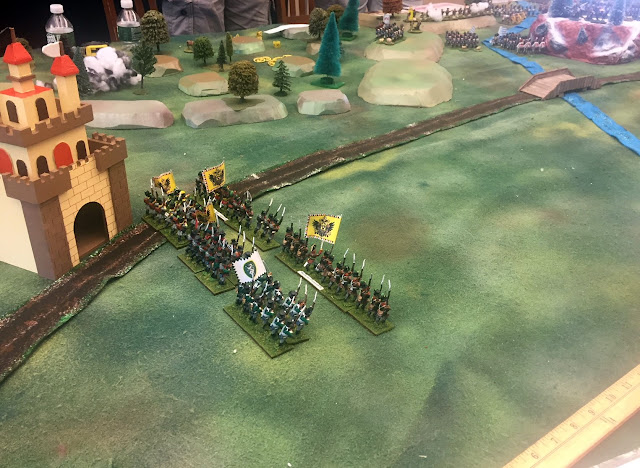 Not long afterwards,  Teimer's command enters from the opposite direction  on a Double Move. Elsewhere, Hofer goes down with a wound as well! 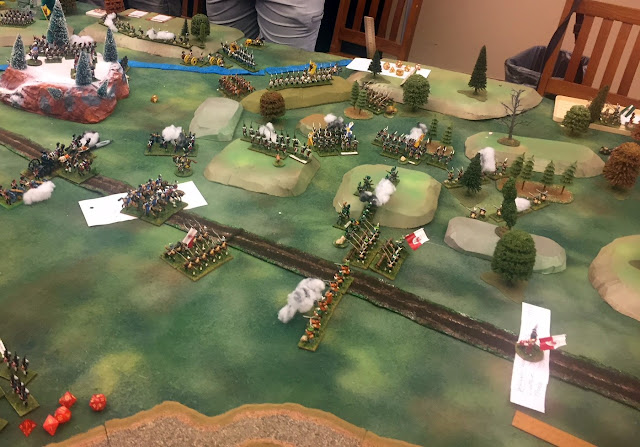 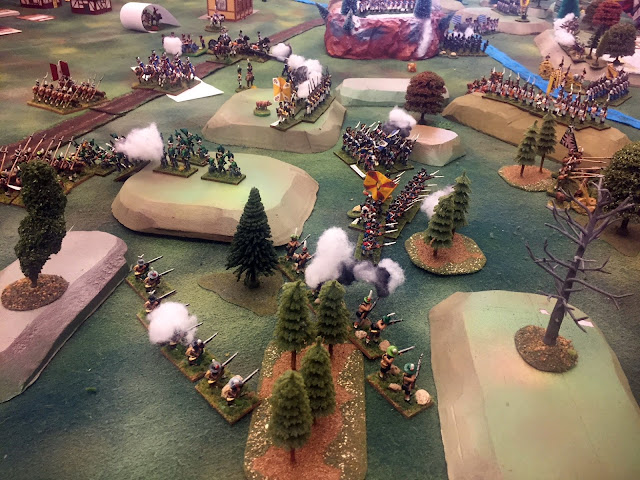 This game was hugely fun, as usual thanls in no small measure to the players themselves. In the end, however, it was the Bavarians who prevailed, the Rebels withdrawing into the alps and safety. Historically, after fending off Tyrolean attacks all day, Deroy and his command slipped away under cover of darkness, abandoning Innsbruck, where they had become increasingly isolated.