The story of the Swiss Cantons at war during the Renaissance era  begins in the late Medieval era, with the establishment of the Eternal League between the three Waldstätte or ‘Forest Cantons’ around Lake Lucerne – Unterwalden, Uri and Schwyz, in 1291. They provoked a confrontation with the Happsburgs, which lead to the destruction of an Austrian force of 2,000 or more invading the cantons at the decisive battle of  Morgarten, November 15th 1315. More victories for the Swiss followed, against fellow Swiss, supported by Burgubndian men at arms at  Laupen (where they faced some Swiss enemies as well) June 21st , 1339 (which lead to the addition of the pike to their primary weapon, the halberd). During a prolonged armistice with the Hapsburgs, there occurred a succession of alliances between the Swiss cantons: Lucerne (1332), Zürich (1351), Zug and Glarus (1352), and Berne (1353).
War with the Austrians resumed, once again provoked by the Swiss, resulting in another decisive defeat at Sempach (July 9, 1386), and further actions at Näfels (April 9, 1388), Voegelinsegg (May 15, 1403), and Stoss (June 17, 1405). The battle of Arbedo, against Milan (June 30, 1422 ), where the Itial Condotierre commander had his heavily armored cavalry dismount and fight on foot, very nearly lead to a severe defeat of the Swiss, and prompted the completion of their move to the pike as their primary weapon.
The Swiss - Burgundian Wars grew out of a complex series of alliances and arrangements involving the Hapsburgs, French and Swiss on one side, and the  Burgundians on the other. The seemingly well organized forces of Charles the Bold of Burgundy suffered a series of defeats, at  Héricourt (November 13, 1474), Grandson (March 2, 1476), Murten/Morat (June 22, 1476), and finally nancy (January 5, 1477), where Charles was killed,
There's a very good, concise history of these actions, and analysis on the development of Swiss tactics on the Battlefield Anomalies site. 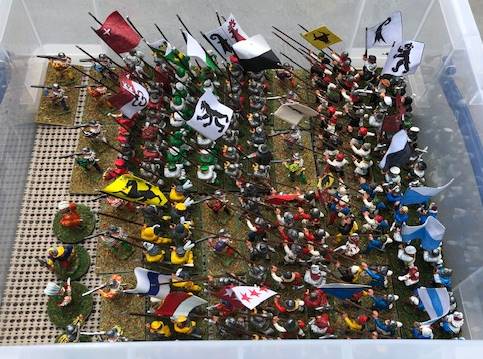 Box #5 contains my Swiss, and a formidable lot they are! The "cantonal colors" of their dress, and the  dramatic but simple cantonal banners add to their appeal. There are 164 pikes (including a few stands of  Halberdiers mixed in). 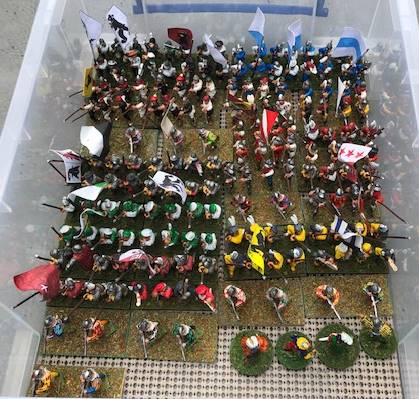 The figures are mix of Minifigs, Hinchliffe, and Old Glory.  There are 16 skirmishing Arquebusiers included; they were used mainly to screen the massive pike phalanxes, and counter enemy skirmishers. 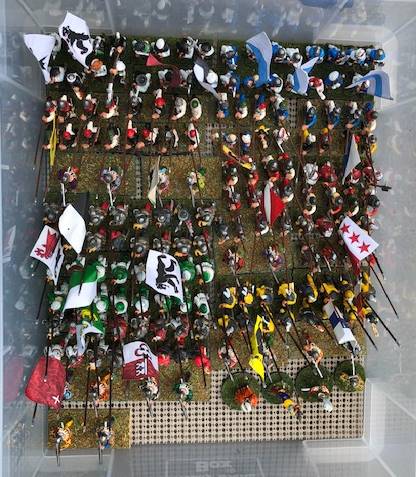 The Swiss had a very decentralized command structure, but 4 leader/hero figures on foot are included in the group.
Posted by Gonsalvo at 7:11 AM