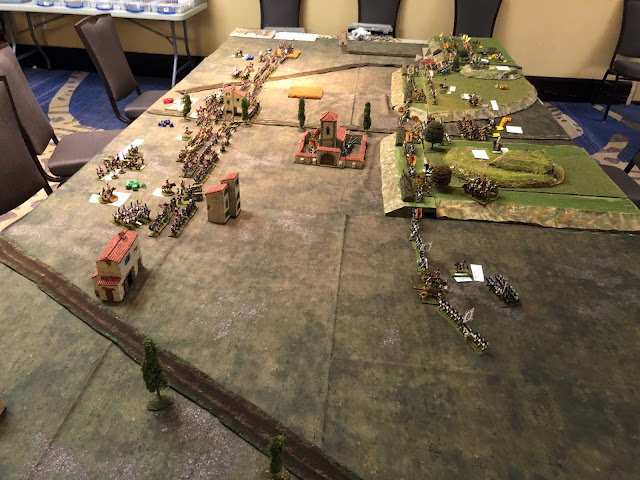 I was fortunate that there were no games scheduled to run on my table, so I started setting the game up about 8AM. 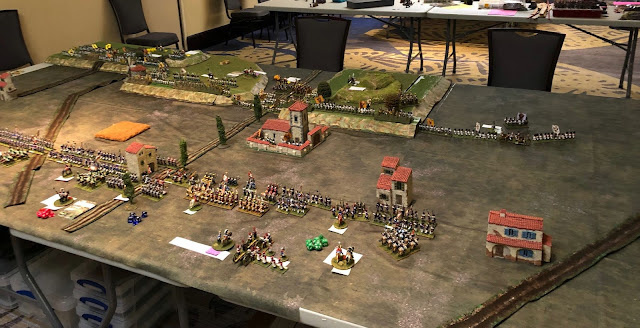 I helped Tim with one of his Wars of the Roses games (with Test of Resolve rules) from about 11 to 1, and then finished setting up the table by about 3 PM for a 6 PM start. 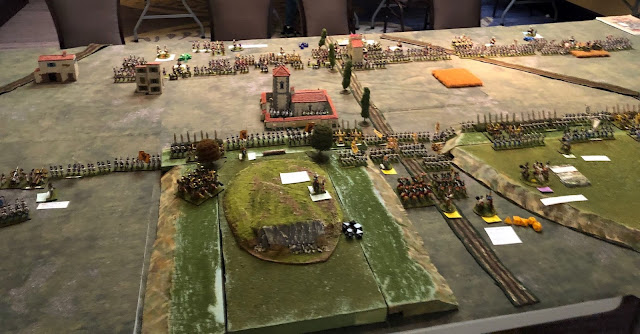 That allowed Tim, David, and I to head out for a late lunch at our favorite Lancaster restaurant for the convention, Yorba's. David and I actually had a Greek entre on Saturday! 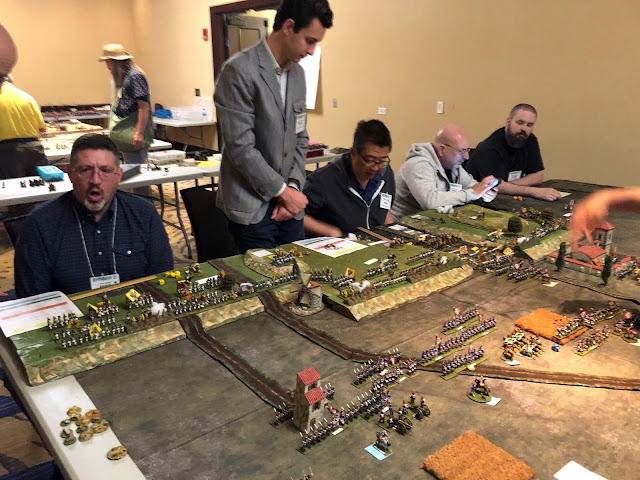 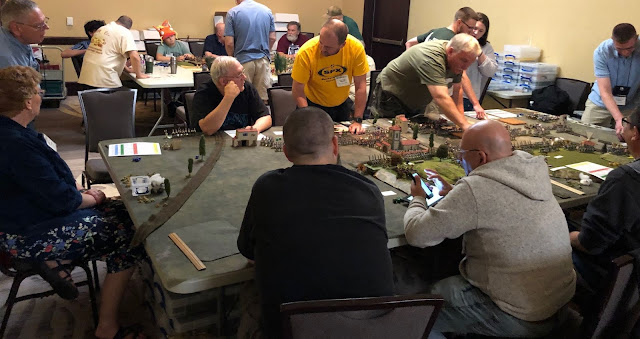 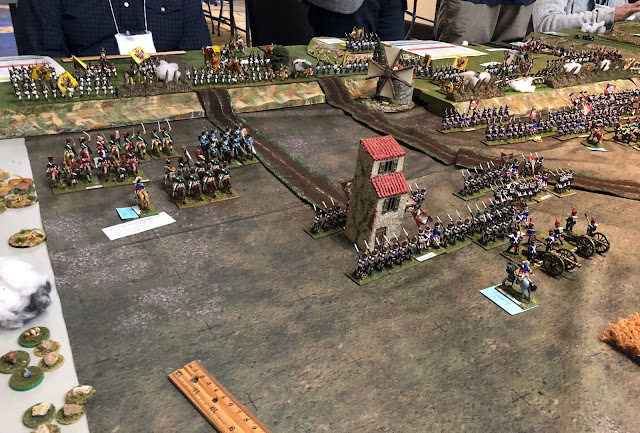 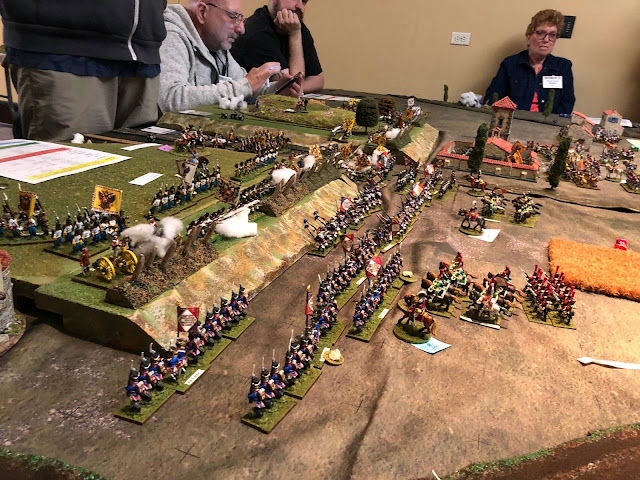 Both side's reserves make fairly early appearances; Luke commands the Grenadiers moving up from Reserve, hoping to form the mass de rupture (that's not a hernia, by the way!).
Katherine (at the far end of the table) was watching the game with her husband, so I appointed her keeper of the morale chips!  The plink of lost morale chips being discarded is always satisfying... to the other side! 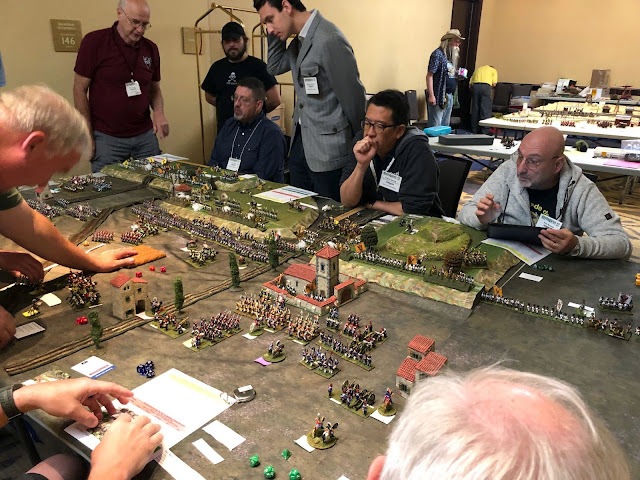 Hayden (standing, in jacket) was the only player completely new to FoB, and he caught on very quickly. 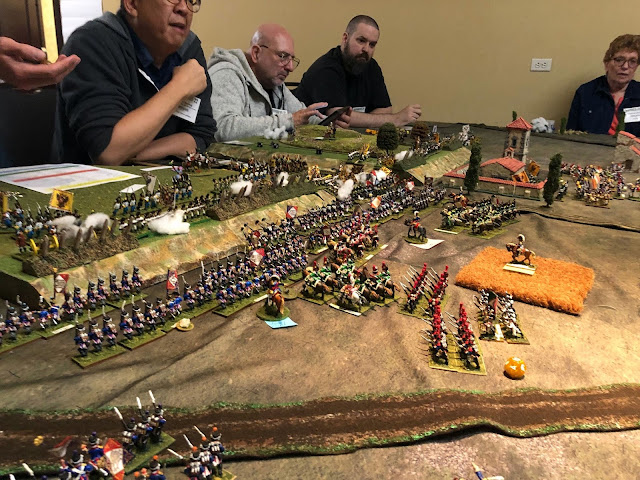 The combination of the uphill position and scattered works gave the Austrian defenders significant advantages, although their Leadership quality was poor compared to the French, which helped the French rally off hits and disorder more easily. 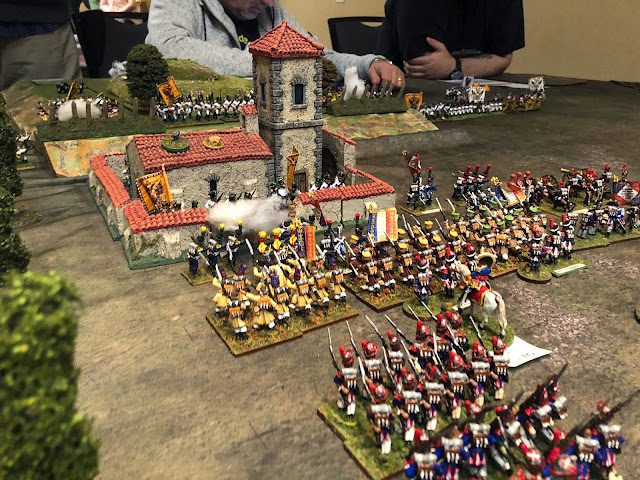 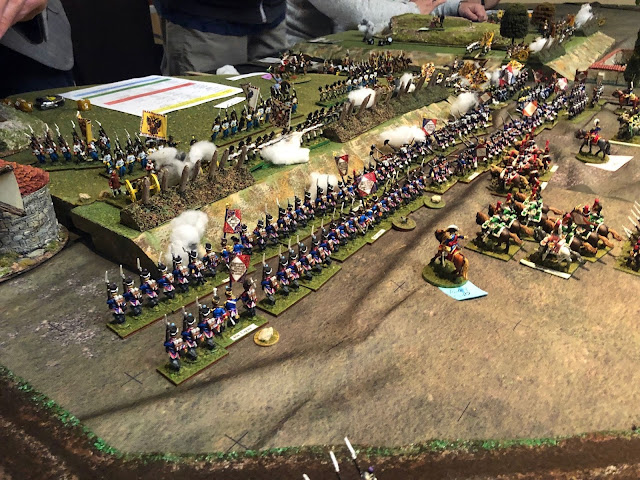 Much musketry; I love the visual effect of the "smoke" markers used in Field of Battle as part of the game mechanics! 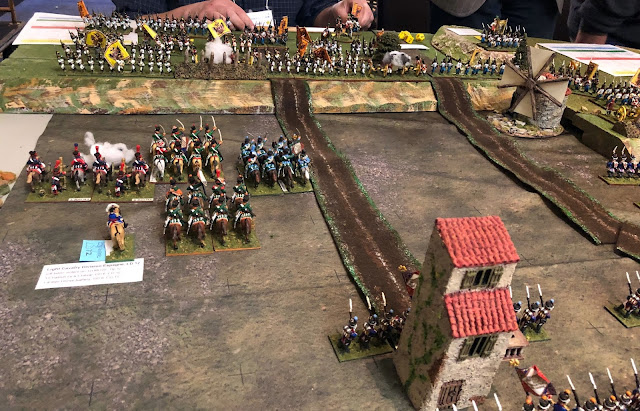 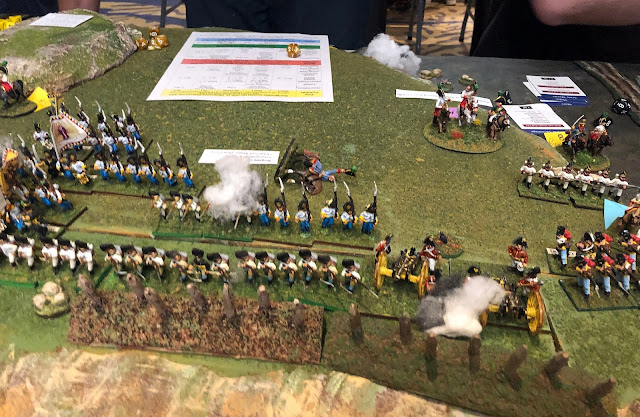 One of Hayden's commanders is hors de combat, the first of a number of leader casualties on the day! 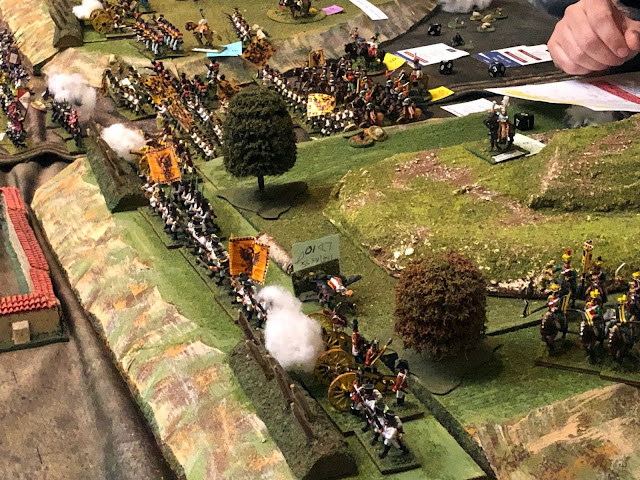 And another one bites the dust! One of Tim's Austrian Brigadiers falls as well. 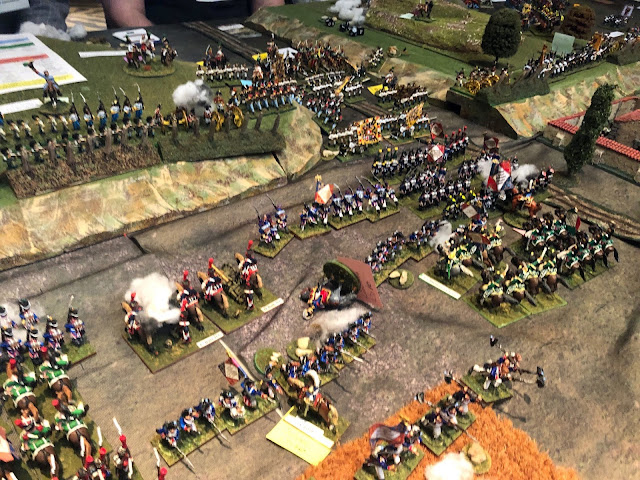 Fate is an equal opportunity destroyer! 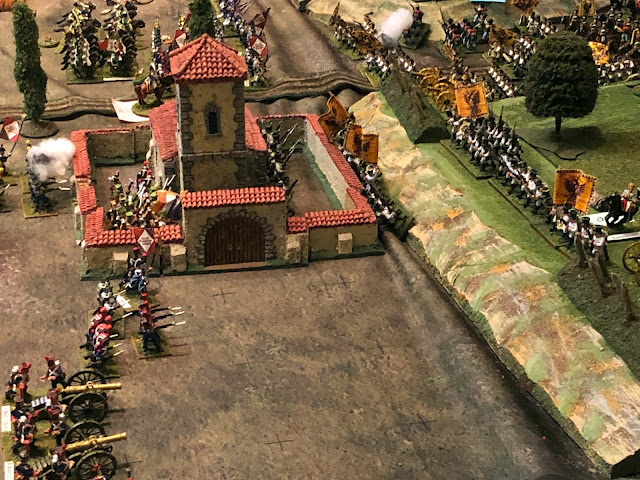 Half of Caldeiro falls to the French attack! 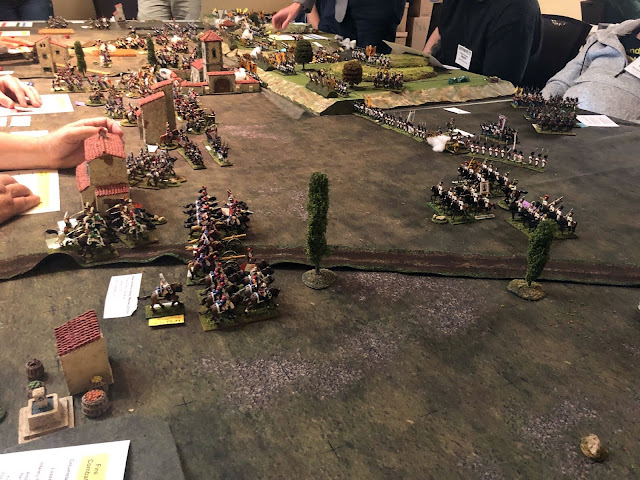 On the Southern end of the battlefield, Glen receives a Cuirassier brigade supported by a horse battery, whilst the Austrians send all of their late reserves South as well - 2 Grenadier brigades and a Dragoon brigade! 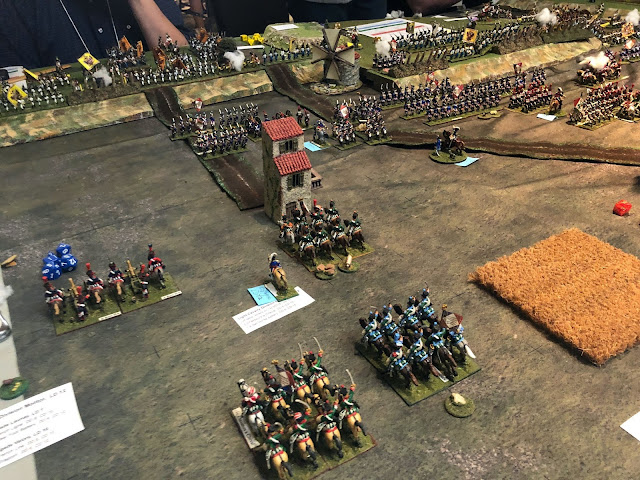 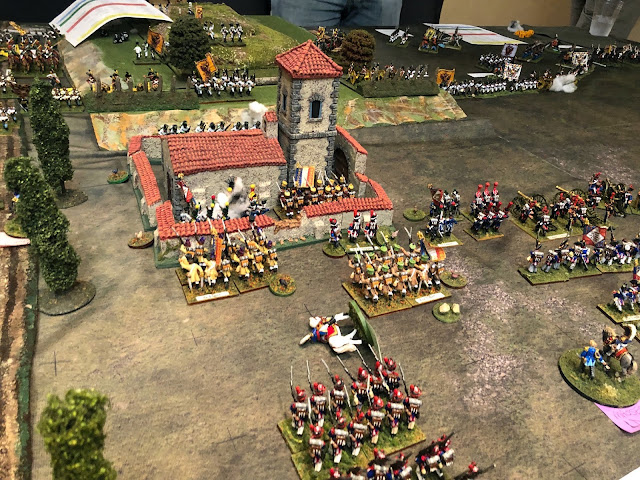 Caldiero has fallen, but so has another French general, slain in tjhe assualt! 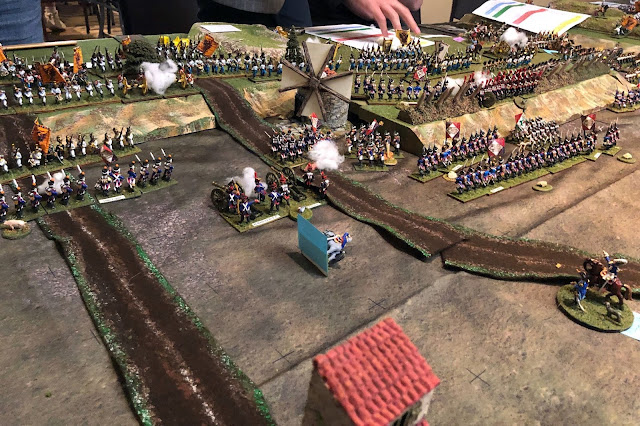 Luke's grenadiers achieve a breakthrough onto the defensive ridge position, as yet another French general is hit! At about this point, a new card shuffle and Turn occurred, and the Austrians were down to zero Army Morale points, and paying them to the French.
Erzherzog Karl won the initiative by 6 and played first; the Austrians turned a couple of good cards and regained some ground, but were still at zero AMP when an Army Morale Card was turned. Phil; was tapped for the key die roll, and Karl's D10 roll beat the opposing d12, so the Kaiserlicks soldiered on! 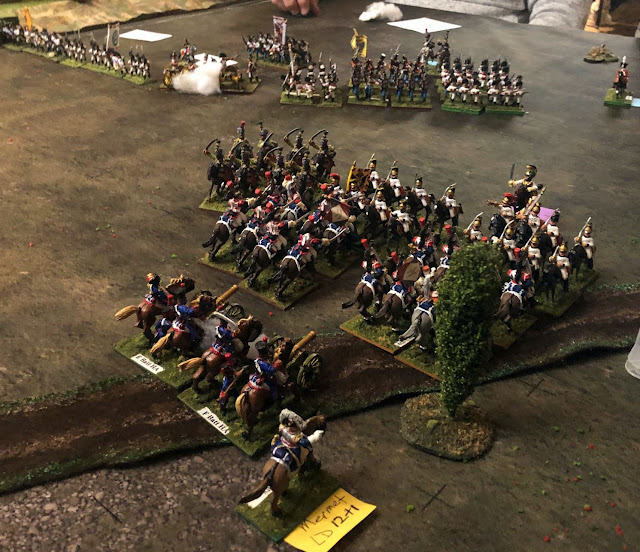 They made good use of their remaining cards, and drove the French to zero AMP in turn, and soon the French were playing the whitecoats for lost morale!  With their own six card sequence, the French made up some of their losses, including this charge by the Cuirassiers in the South, but they turned their own Army Morale card while still at zero AMP's and had to make their own D10 vs D12 roll. They failed, and Massena called off the assaults, his men exhausted. Historically, much the same result occurred, with Karl withdrawing soon afterward due to French successes in the Danube theater. Thanks to all the players, who made this a most fun and thrilling game!
I used much the same scenario for this game aa for my Caldiero Field of Battle 3rd edition solo playtest and rules walk through, but the outcome was very different. Compared with that game, I improved the Austrian line defense die to D6, improved Karl's LD to D10, and allowed the Austrians to use column formation. Karl won the initiative in this game considerably more often than Massena did... very unlike the play test version!
Posted by Gonsalvo at 9:19 PM