Battle of Heraclea, May 280 BC

Historicon is less than a week away; here's the test game for Heraclea, played last month. 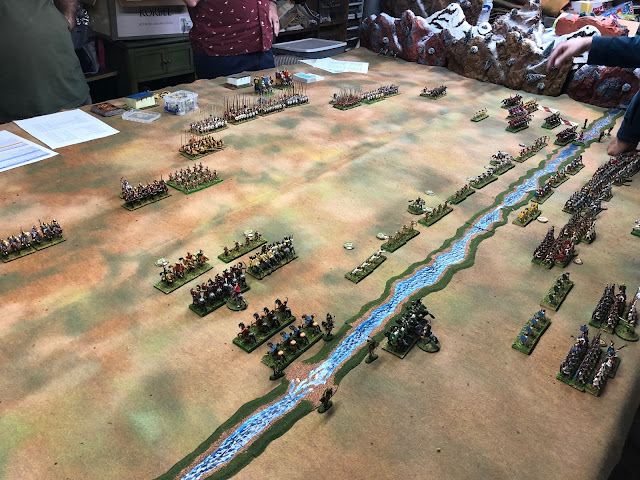 The Romans automatically move first, and their cavalry crosses the fords on either flank.
My scenario is based upon that for WAB by Jeff Jonas: Heraclea, The Initial Clash: republican Rome vs. Pyrrhus of Epirus 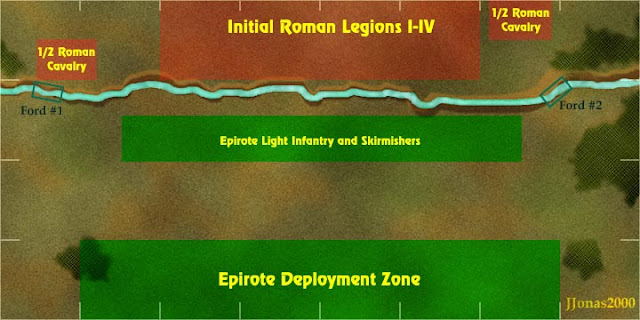 Deployment map from the scenario; I will be - I will be using a 6 x 12 foot table which scales perfectly to this 4 x 8 version. As usual for most Ancient battles, the terrain is not complicated!

Background of the battle from the same site:
When Pyrrhus’s scattered forces arrived in Tarentum early in the spring of 280 BCE he found his allies to be totally unprepared for war and unwilling to raise the troops that they had promised him. Undaunted he attempted to fill the ranks of his local forces by conscription and drilling the Tarentines, who deserted in droves until locked under guard by Pyrrhus’s veterans.  Pyrrhus in effect established himself as dictator of the unruly Tarentines.  If he could train this rabble he would have forces enough to go on the offensive, but his plans were cut short as the Romans hastily assembled three armies and began to systematically crush the allies of Tarentum.

The largest of these Consular armies consisting of 50,000 troops, was led by Publius Laverius Laevinius and struck into Lucanian territories to keep them from joining forces with Pyrrhus. Even though the Tarentines were not fully trained, and his forces were outnumbered, Pyrrhus gathered his Hellenistic veterans and challenged the might of the Legions at Heraclea in May 280 BCE.

Pyrrhus marched to Heraclea and made his fortified camp*, there he witnessed for the first time the Drill and order of the Romans. It was quite a shock to him to realize that not only was his opposition more numerous, but it was also a cut above the “barbarian” forces he expected to face!

At least he felt confident that the Roman swordsmen would be at a disadvantage versus the phalanx, his superior cavalry, and his “Trump” card, the elephants. He reckoned that these factors would be enough to outweigh the Romans numerical advantage. Nevertheless, Pyrrhus deployed his forces behind the river Siris, smartly working the terrain to his advantage. Pickets and light troops covered the stream and the elephants were wisely kept behind the phalanx in reserve.
(*Apparently the Romans were so impressed with Pyrrhus’s walled camp that they copied it! Pyrrhus no doubt was well inclined to go to this unusual measure because of the tricks he learned from his first benefactor, Antigonus 1st.)

The Romans for their part were unusually aggressive and spirited as they believed that they would deal with Pyrrhus’s army with the same ease that they had previously handled the Tarentine levies. Laevinius ordered out the Legions and they advanced on the Epirote pickets. The Roman and Allied cavalry were sent up and down stream and forded the river. The Epirote pickets along the stream fell back as their flanks were turned. 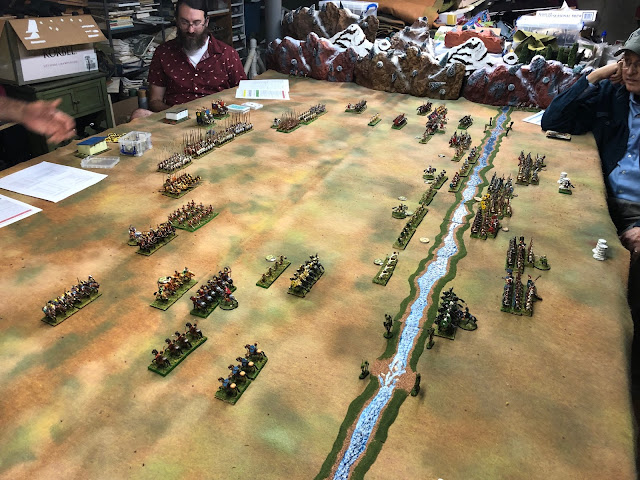 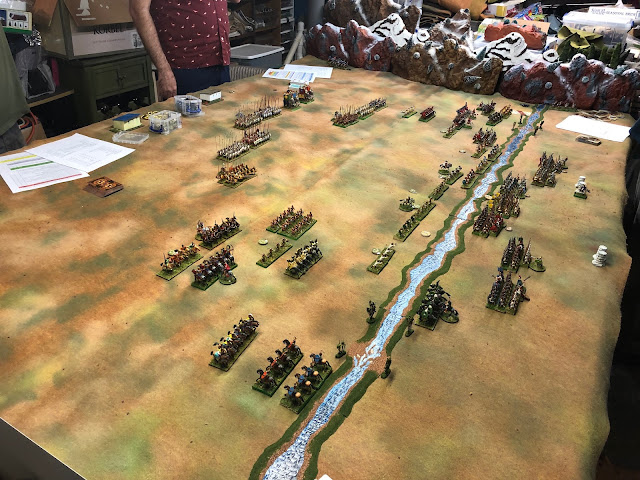 The Roman cavalry outnumbered that of Pyrrhus, but he had an ace in the hole - his elephants, beasts the Romans were completely unfamiliar with until then. 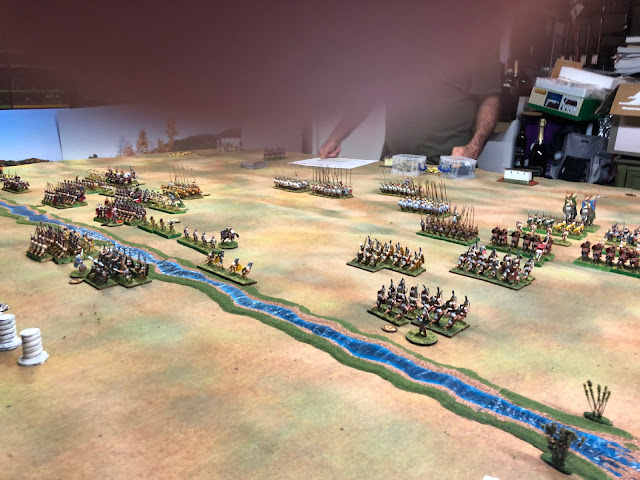 A little oscurus digitorum on this shot from the Roman lines! 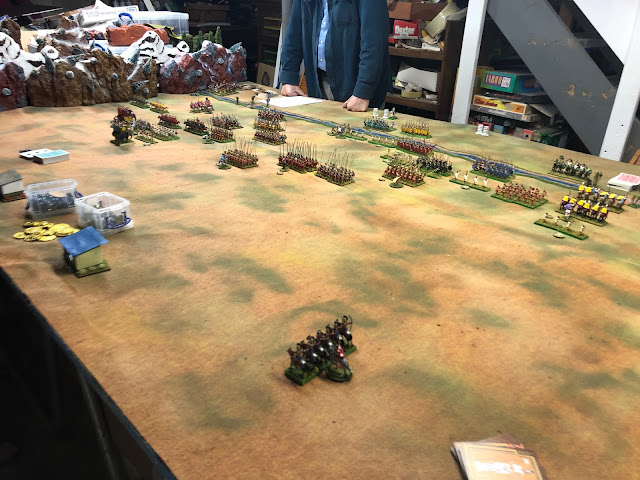 One unit of my Roman cavalry manages to get into the Epirote backfield... never a good thing for the enemy! 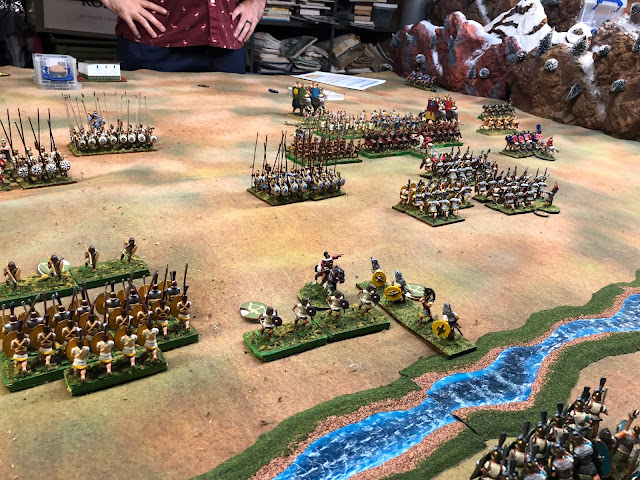 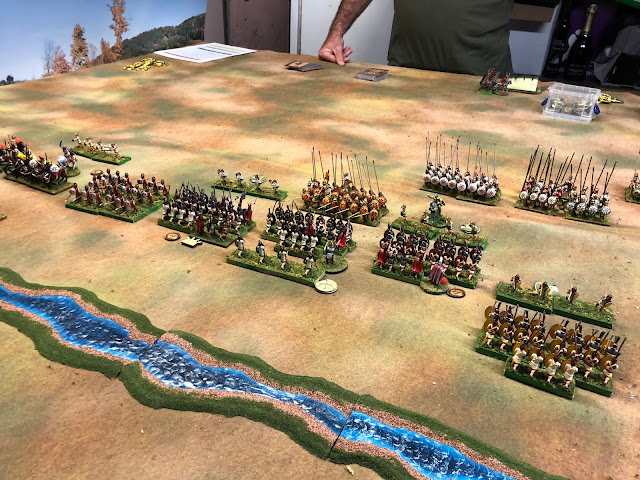 The Epirote phalangites moved up as quickly as they could, but were somewhat late to the party!
My cavalry can be seen sacking the first Epirote camp in the background... 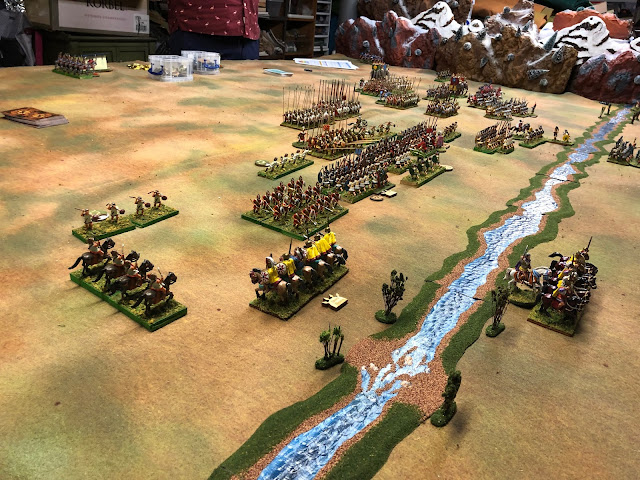 Peter C. handled Pyrrhus, who is a Great Leader in To the Strongest terms, and his elite Epirote cavalry with skill. 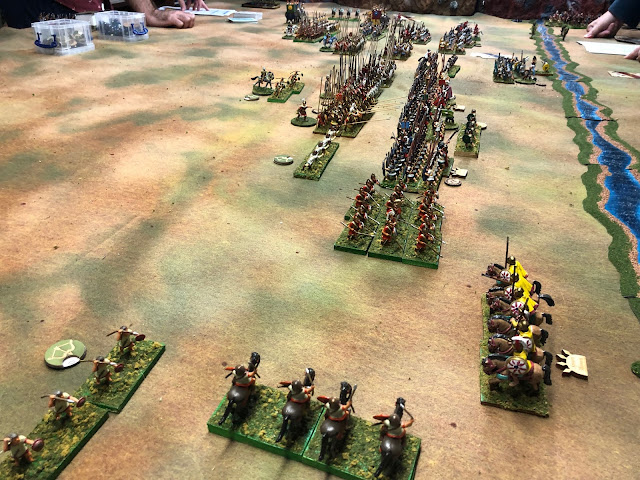 Phalanx and Legion face off in the Center! 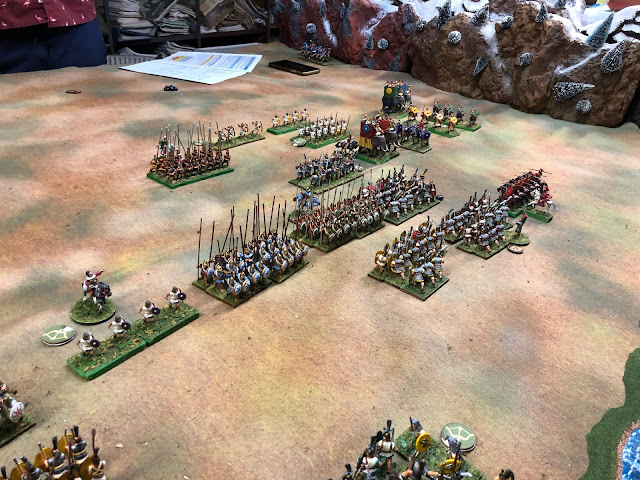 On the Roman right, the Epirote cavalry was dispatched fairly quickly, and then played cat and mouse with the Elephants, which the Romans called "Lucanian Oxen"! 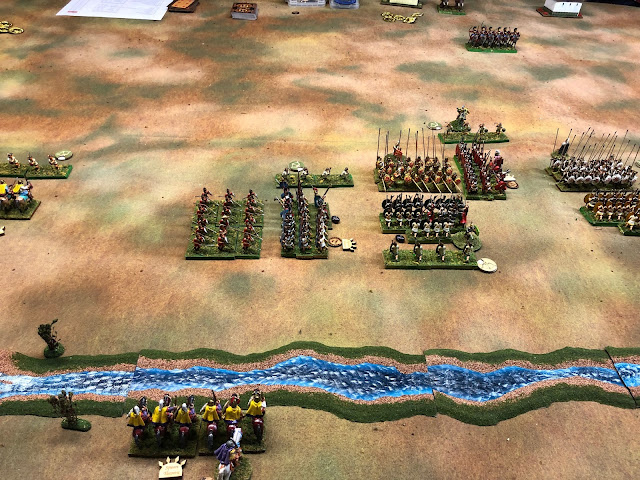 Pyrrhus has the rear of the Roman Left in his sights! 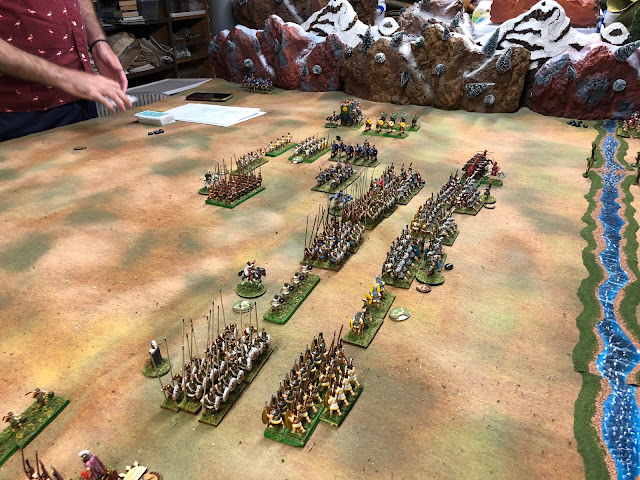 Overview of most of the table near games end.
The loss of the second Epirote camp plus the destruction of a phalanx resulted in a narrow Roman victory.

(Proved not to be useful in the test game, will replace with 2 units of Leves as camp guards plus an additional Hero)

Pyrrhus of Epirus, the "Eagle King".

Email ThisBlogThis!Share to TwitterShare to FacebookShare to Pinterest
Labels: Ancients, Battle Reports, To the Strongest