I have my two units of Sash and Saber 28mm Russian Grenadiers (18 figures each) all painted up as part of our Borodino project, but had decided to try "the DIP" on them... well actually, brushing on a Future Acrylic Floor finish stained with black ink. So, could I find the stuff? NO! Wasted a few hours and a couple of gallons of gas including places that an on-line search said had the stuff, but didn't (the name of which has changed, but I got that down before hunting for it - "Pledge Floor Care with Future Shine"). Finally just wound up ordering it from Amazon.com on Saturday. The shipping added about 50% to the (low) cost, but I spent more than that on gas, not to mention the wasted time! 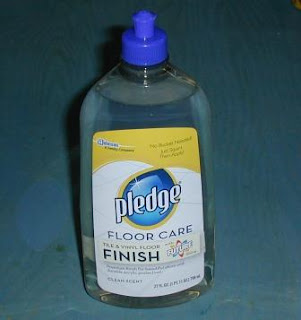 Anyway, with the very warm weather predicted this week, I used the weekend to prep all the figures I have remaining to paint for the Borodino project so that I could take advantage of the warm (60's) weather of the past few days. I usually prime a lot of my figures in the Fall and spring; the humidity is sometimes a problem in the Summer, plus I don't do much gaming or painting after Historicon each year. The cold temperatures are an issue in the winter, although I've found in a pinch on a warmer day (high of 30's or above), I can use our attached garage after it has warmed up by a car (the warm engine that is, not RUNNING it in the enclosed garage - Carbon Monoxide Poisoning!!!) to about 50 degrees F for spray priming, just takes a loooong time to dry. Priming took place Monday and Tuesday nights: 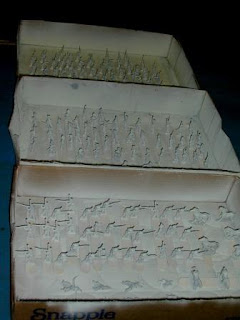 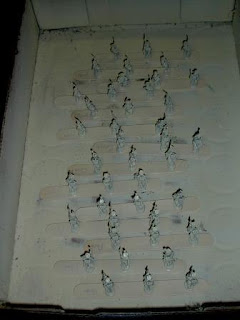 This is about 52 Sash and Saber French Napoleonic Infantry; these guys are going to become 12 Portuguese Legion (infantry), 12 Provisional Croatians, 18 Neufchatel Battalion, and the remaining 12 figures are to bring my 2 Hessian line regiments up from 12 to 18 figures each. 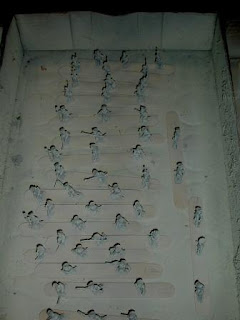 This box has 2 bags of  Old Glory Russian Foot Artillery crew, 40 figures in all. It will make four 6 pounder foot batteries and two 12 pounder foot batteries; I don't think I need them all for Borodino, though. Guns yet to be assembled and primed (the great and economical Sash and Saber models, although not specific for Russian ordnance, will be used). 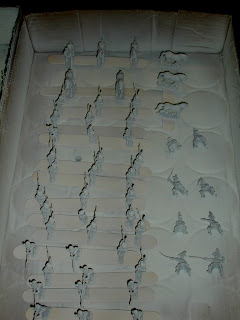 The final box has 36 Falcon figure Russian Grenadiers/Jagers - these will be painted as the units of Guard Jagers holding Borodino itself. Along with that are six Old Glory Russian Cavalry generals, and two Falcon command figures - Kutusov himself and a Russian Colonel.
I have about 20 half finished Russian generals and aides (Old Glory) already in the works, so altogether that will be about 156 figures to finish by the later part of July, not every one of which is needed. Should be able to make it! 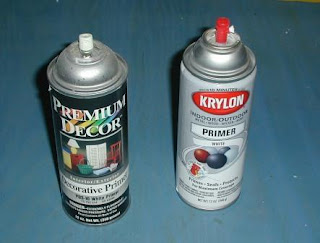 I usually use the Krylon white spray primer. It dries quickly and doesn't go on too thick; the other can is a can of  metal primer I bought when everyone seemed to be out of the Krylon - I did one of the boxes with that - I don't like it - it takes forever to dry, goes on fairly thick, glossy and is actually somewhat water repellent, usually requiring two coats of my initial coat color for coverage - Grrr!  At least it is almost empty now so I won't have to deal with it again much after this!  Oh, and, the Pledge/Future arrived today - four days after ordering it, so my next post will cover my first try of using it.
Good gaming,
Peter
Posted by Gonsalvo at 12:12 AM