Unlike any of the other major combatants in the Napoleonic Wars, the Russian army had permanent Grenadier regiments. Exactly how it was decided which new soldiers would enter a Grenadier regiment (as opposed to the Musketeers or Jagers) is unclear to me, nor is it clear whether men were transferred into a Grenadier regiment in recognition for bravery etc. (in the fashion of the French Imperial Guard), but I have never read anything to indicate that this was a common Russian practice. Never the less, the Rusian Greandier regiments generally seem to have turned in very solid battlefield performances. These standing Grenadier regiments certainly must be distinguished from the Converged Grenadier battalions of 1812, which were formed from the Grenadier companies of the Depot battalions of each Infantry Division, and thus were probably little better than ordinary line units.

From 1801, the Grenadier Regiments wore the mitre cap (the tall version was for the Grenadier company of each battalion, with a shorter version for the three Fusiler companies of the battalion). These had a brass front, while the rear of the cap was in the Inspection color, with the headband in the shoulder strap color. The Grenadiers officially changed to the shako in February 1805, but obviously this order did not take effect instantaneously, the Pavlov regiment (at the very least) of course  still wearing the Miter at Austerlitz (December 1805) and again at Friedland (June 1807), after which they were officially granted the right to retain it, which they did even after entering the Imperial Guard, wearing them all the way down to 1914!

There is a simply great listing of the Inspection/facing/flag/mitre colors for the Russian Napoleonic infantry, along with the later shoulder strap colors and so forth on here on The Napoleon Series. In addition, the colors of the drumsticks, halberd shafts (for NCOs), and flagpoles varied by regiment within each Inspection, and could be straw yellow, white, black, or coffee brown. In 1808, with the adoption of the Divisional system, this became more systematic, the 1st and 4th regiments of the Division having these items in yellow, the 2nd, and 5th regiments black, and the 3rd regiment of each Division white! The Halberds were withdrawn from the Musketeer regiments in 1809, although Viskovatov records that the order to withdraw them form the Grenadier regiments didn't come until October 1811! A best as I can tell, these drumstuck/flagstaff colors remained the same thereafter until well after the end of the Napoleonic Wars. 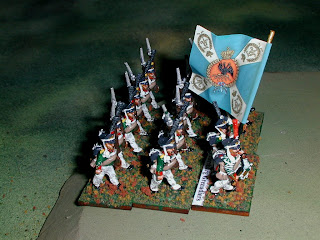 These 28mm Sash and Saber figures represent the St. Petersburg Grenadier regiment. Both of the two regiments shown in this post were part of my recent "Magic Wash" experiment, so you may notice some difference in the shading from stand to stand. 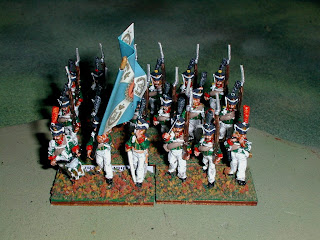 Note the black drumsticks, flagstaff, and fifes for this regiment. As the regiment was originally part of the Livonia Inspection, its colored flag has the Turquoise color of that (earlier) Inspection. 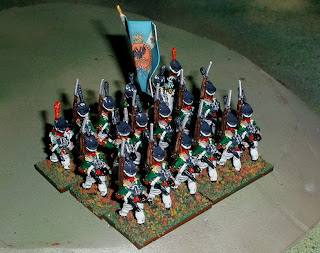 I have given my Grenadier regiments the yellow shoulder straps that became universal for them only in1814; a matter  of personal preference! 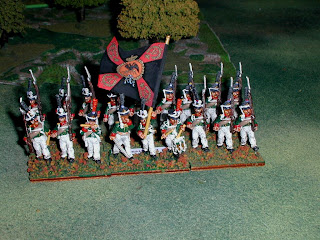 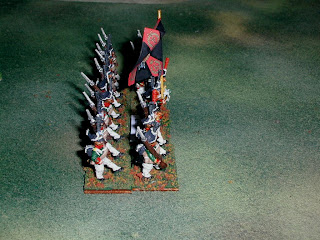 If you look closely, you can see the gold "galon" lace ornamentation on the collar and cuffs of the NCO  in the foreground, front rank. This was typical for NCOs in all regiments of the Russian army. 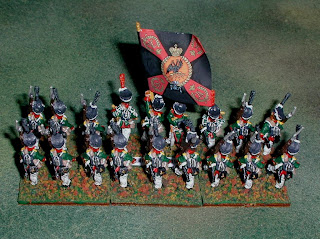 Rear view of the Life Grenadiers; the excellent flags are by GMB Designs; highly recommended! Note the red plumes of the drummers and the fifers also; I like to include fifers in my Guard and Grenadier regiments so I can have more of those tall red plumes on the table!   :-)
Until next time...   Good Gaming!