The Lifguard Jagers originally wore a light green uniform similar to the line Jagers, with orange collar and cuffs bearing yellow litzen. In 1807 the uniform changed to dark green, with orange piping on the collars, cuffs, and shoulder straps; black belts. The Finland Regiment was also uniformed as Jagers, but with red piping on the collars, cuffs, turnbacks,  and shoulder straps. 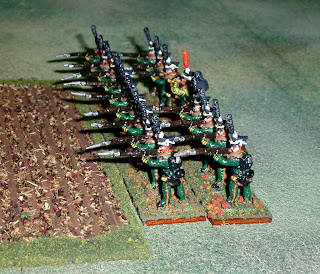 Here's the first battalion of the Lifeguards Jagers; actually, initially none of the men wore the tall plumes, but instead just the pom-poms, but when the Grenadier (or Carabinier) companies were raised (1811) it seems they did have the tall black plumes. I have chosen to give all the companies the tall black plumes, just, well because it m,ore readily distinguishes them form the line Jagers. 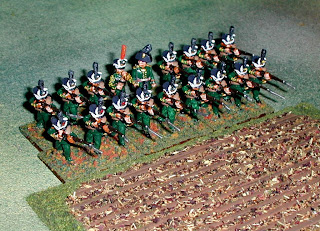 Black leather belts, etc, were worn (instead of white), again like the line Jagers. 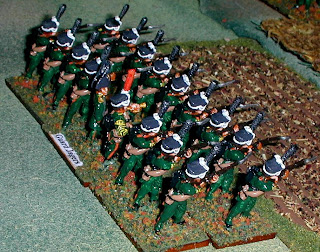 The regiment had yellow litzen (guard lace) on the button holes of the collars and cuffs; the drummers and hornists had red plumes and yellow lace shoulder wings and chevrons on the sleeves (maybe with a thin red line down the center of the yellow lace/tape). 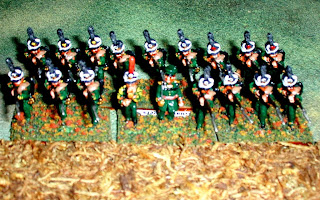 This is the second battalion; aside from the color of the pompoms of the Jager companies its uniform is pretty much identical to the first battalion. 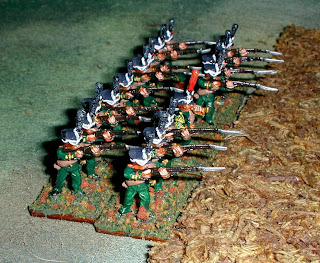 The Lifeguards Finland regiment evidently had red lace with a thin black line down the center. 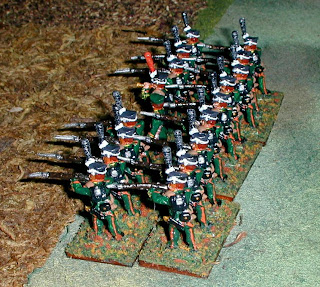 Note the orange stripes on the green pants. Both units are Falcon Figures purchased at Historicon a year ago to make the Guard Jager contingent for our Borodino game next month; I like the "standing, firing" position for Russian Jager units, where possible.
I've also finished and based 40 Russian artillery crew; just need to do the cannons that go with them, plus a French Guard Horse artillery battery, which is 60% finished, and I'll be all set for Historicon!
Posted by Gonsalvo at 12:09 AM