The Battle of Maloyaroslavets, October 24, 1812
A Scenario for Field of Battle 2nd edition, by Brent Oman
Scale: 1 Infantry unit = 900 men, 1 Cavalry unit = 600 men, 1 Artillery unit = 6-8 guns Allied, 12 guns Russian.
Table Size: 6 x 10 feet; 1” = approx. 60 yards.
Background: Russian General Kutuzov learned on October 22nd that Napoleon’s Grande Armee had abandoned Moscow on the 19th. The French were marching south to Kaluga. Retreating on a southwestern route would allow the 100,000 survivors of the Grande Armee to find warmer weather and traverse land not yet ravaged by the brutal 1812 campaign. To head off the French columns and force them to turn west instead of south, Kutuzov ordered 13,000 men under General Dokhturov to stop the enemy from crossing the Lutza River on the road to Kaluga.
After an all-night forced march, Dokhturov’s corps arrived at the village of Maloyarslavets at dawn on October 24. They drove a small French vanguard from the town but could not dislodge the French from their precarious bridgehead on the river bank. At 10:00am, Prince Eugene’s IV Corps began to arrive in force with the intention of recapturing the town and opening the road to Kaluga.
Map: The Lutza River may be crossed in column formation via the bridge. The River is otherwise Class III terrain and crossable only by Infantry. In addition, when (infantry) units are in the center of the river and attempting to move to the riverbank, each unit must roll its Defense Die type. On a Roll of “1”, the attempt fails, and the unit loses 1 UI (no morale Point cost for this loss); on a roll of “2” or “3”, the attempt fails and the unit remains in the icy waters. On a roll of “4” or more, the attempt is successful, and the unit is placed on the far bank, Out of Command. The tributary stream counts as Class II terrain, but is impassable to artillery. The hills are Class III Terrain for movement (and melee if enemy is in class I terrain), the woods Class III. All buildings are class II terrain, except the fortified Church, which gives attackers a DOWN 2 for fire, and DOWN 3 for melee.
Scenario Rules: To reflect the combination of their poor firepower but great stoicism, Russian Line and Jagers, although Regulars, will have a Defense Die of D8 but Line will have a Combat Die of D8, and Jagers D10! Cossacks only cost a Morale point when they are completely destroyed or routed (in which case the unit is removed immediately). The game ends when one side fails Army Morale. Control of each of the two town sections of Maloryaroslavets also subtracts 1 Morale point from the opposing player's total; another 1 MP per building in Maloyaroslavets is subtracted from the opposing player each time they change hands.
Deployment: French and Russian forces are deployed as shown on the Map. Any formations and or facings of the player's choice may be used
Allied Reinforcements: All French reinforcements enter at or within 18” either side of point "A."
PINO arrives on the first French MOVE card.
LECCHI, TRAIRE and PREYSING arrive on the second French MOVE card.
GERARD arrives on the third French MOVE card.
All reinforcements enter in the formation(s) of the player's choice.
Russian Reinforcements:
VASILCHIKOV arrives at or within 18” either side of point "C" on the first Russian MOVE card.
The remainder of RAEVSKY’S corps arrives at the same location on the second Russian MOVE card.
KUTUZOV arrives with his heavy artillery reserve at or within 6” either side of point "D" on the fourth Russian MOVE card, but he and his guns must remain within 12" of the southern board edge.
All reinforcements enter in the formation(s) of the player's choice.
Victory Conditions:
Enemy fails Army Morale but controls* Maloyaroslavets = Draw
Enemy fails Army Morale and you control* Maloyaroslavets = Decisive Victory
Enemy fails Army Morale, neither side controls Maloyaroslavets, and you have 25% or more of starting Morale Points left at the end of the game = Major Victory; Minor Victory if the same but fewer than 25% of starting Morale points left
* = control means you either occupy both buildings, or there is no enemy within 6” of any unoccupied buildings.
Scenario design notes: This scenario (and map)was adapted for Field of Battle from the scenario for Age of Eagles by GRW. 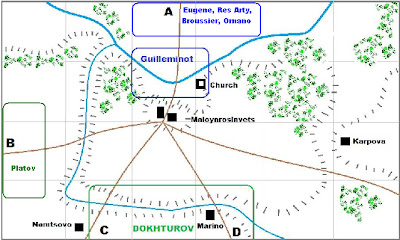