"They call me Mallo-Yarrow"; Battle of Maloyaroslavets, 1812

On October 22nd, 1812, Russian General Kutuzov learned  that Napoleon’s Grande Armee had abandoned Moscow on the 19th. The French were marching south towards Kaluga. Retreating on a southwestern route would allow the 100,000 survivors of the Grande Armee to find warmer weather and traverse land not yet ravaged by the brutal 1812 campaign. To head off the French columns and force them to turn west instead of south, Kutuzov ordered 13,000 men under General Dokhturov to stop the enemy from crossing the Lutza River on the road to Kaluga.

After an all-night forced march, Dokhturov’s corps arrived at the village of Maloyarslavets at dawn on October 24. They surprised a small French force in the town, and drove them out. However, the Russians were unable eject the French from their tenuous bridgehead on the river bank, anchored by the fortified brick church that dominated the approaches to the bridge. At 10:00am, Prince Eugene’s IV Corps began to arrive in force. The Viceroy planned to recapture the town and open the road to Kaluga.

We did this playtest game in my basement on June 3rd of this year to evaluate the scenario planned for Saturday at Historicon in July ("The Road not Taken"); I'll be posting the revised scenario subsequently. It was adapted from a 2008 scenario for Age of Eagles by GRW. Greg, Joe, and Czar Barry (of course!) commanded the Russians, while Matt, James, and I had the French. The majority of the table is Class III terrain, and to make matters worse for the French, the Lutza river flowed swiftly through a deep ravine, and is also rated class III, with a chance of infantry fording it losing Unit integrity in the process. The river is completely impassable to Cavalry and artillery, which may only cross by means of the single bridge. 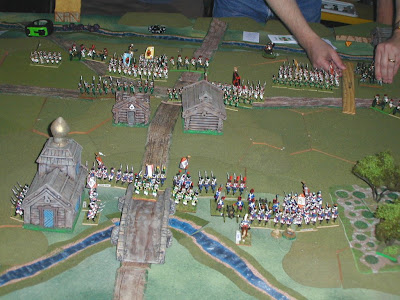 The Russians seize the initiative at the start of the game, and pull 2 MOVE cards in quick succession, reaching the small town of Maloyaroslavets, which sits on a hill surmounting the rugged terrain of the plateau. The lead Division of Eugene's Corps will have its work cut out for it today! 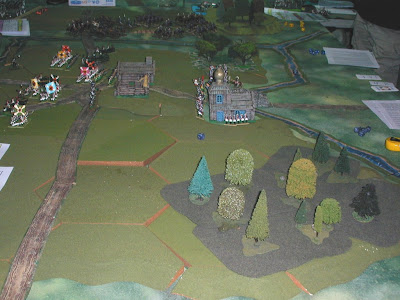 Overview of the table after the uncharacteristically adroit advance by Dockturov's men. 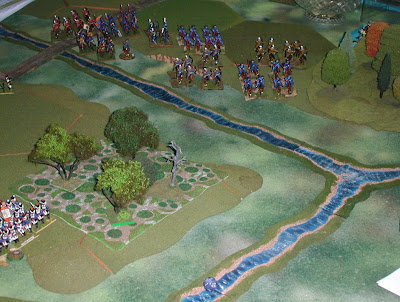 Still more Russians converge on the battlefield - a veritable cloud of Cossacks! 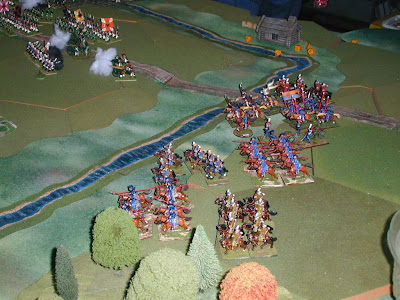 The French become apprehensive about their right flank being vulnerable... 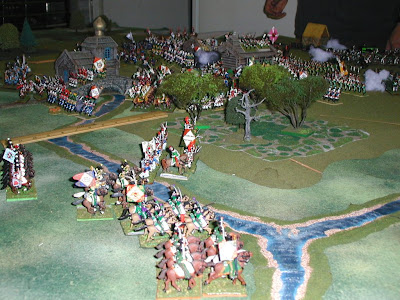 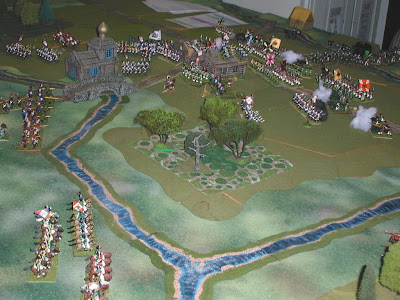 After losing control of the town to the Ruskis, and confronting severe traffic management problems, it becomes clear to Eugene and his Divisional commanders that the infantry must brave the frigid waters of the Lutza river, and reserve the bridge for use by the Artillery and cavalry! 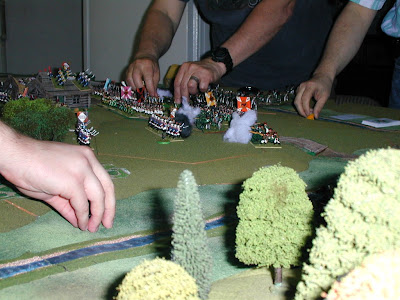 Greg and Barry move up more Russian reinforcements, and send them at the beleaguered town!

The slow process of fording the river allows the 3rd French Division to advance on their left, supported by the Corps Reserve Artillery, and take the pressure off the center, where several assaults upon the town by the Provisional Croatian regiment are repulsed by the Russian defenders with losses. 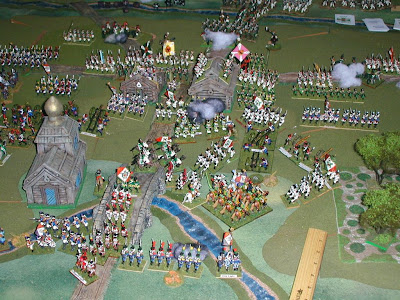 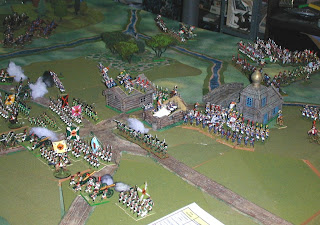 The French (well, Italians, actually) manage to take back part of the Town.

Overview of the battle from the French left - James makes good use of a favorable sequence of cards to move, volley fire, use support fire from his artillery, and then charge!  This exposes Kutusov's own Artillery Reserve, just entering the table. 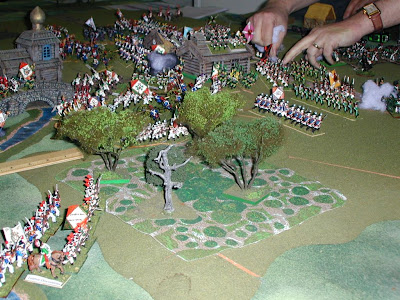 The action on the French right and center heats up as they surge forward, trying to create some breathing space for deployment and maneuver. In the foreground, the Grenadiers and  Conscripts of the Italian Guard have finished traversing the river, and are providing flank support. 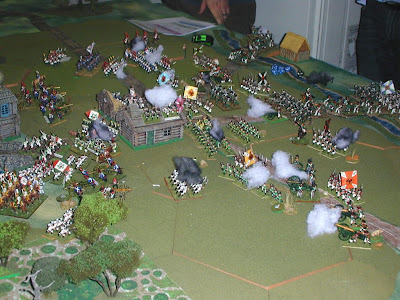 On the French Right, Fontanelli (Matt) moves forward boldly, perhaps some might even say rashly, but his Italian Light Infantry handles the enemy Jagers handily. The small contingent of  elite Dragoons of the  Italian Royal Guard can be seen in support.
At this point, the hour was getting late, and we had learned what we needed about the tweaks required to make the scenario run more smoothly and keep all the players involved in the action. Prior to James' sweep on the French Left and Fontanelli's counter attack on the right, the French were getting hosed in Morale points. What a difference the right cards coupled with aggressive play (and hot dice) can make; by this point, Morale Point losses were just about even again... still plenty of play left on this table, even though we called the game to allow for travel back home for the players.
Myself, I'm back to painting Russian Guard Jagers and Artillery - less than 5 weeks to Historicon. Hope to see some of you there!
Peter
Posted by Gonsalvo at 9:53 PM