Having started with the forces of the King, it is only fair that we give those of the Parliamentarian faction their turn next. The Earl of Essex was one of the chief advocates of the Parliamentarian cause, and was the first Captain General of the Parliamentarian army, commanding at Edgehill (1642) and 1st Newbury (1643) among others. He contributed his own regiment of Foot to the army. His coat of arms included the relatively unusual (in the heraldic sense) "tawney" or dull orange color, and his men were evidently issued coats in that shade (the flags definitely were). Indeed, orange sashes were a common field sign for adherents to the cause of Parliament for the same reason. 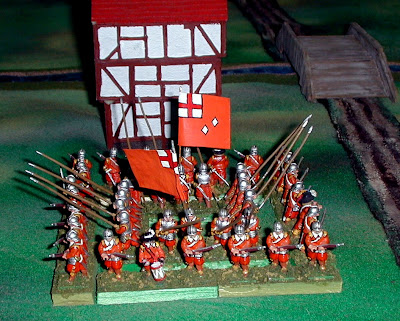 Here we have the Earl of Esex's Regiment of Foote, deployed in "hedgehog" formation; presumably Royalists cavalry has been spotted nearby, and their own horse have been run off, which happened often in the early years of the war! White lozenges (diamonds) are used as the differentiating badge on the regiment's standards. 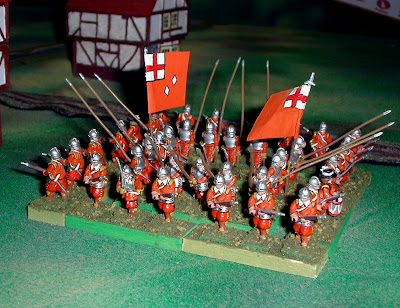 Once again, these figures have been painted in a more "Toy Soldier"  style, using India ink "black-lining" and with a very uniform appearance, armor on the pikes, and stereotypical helmets on all but a few of the men and officers.  Once again, I think the black lining technique is very effective with this style of painting and figures, Indeed, I think this 25mm ECW range was among the best of all those produced by Mninfigs. 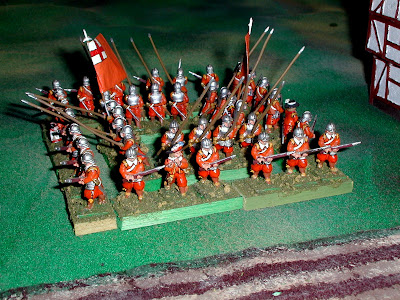 Another view of Essex's regiment. It has 16 pikes on four 60 x 20mm stands, and 24 Musketeers (including officers, drummers, fifers, etc) on eight 60 x 20mm stands. It could easily be used to form two regiments of 20 figures for many rules sets. I have chosen the 3:2 ratio of Shot to Pike; originally, my regiments were 1:1, that is 20 pikes ans 20 musketeers, the 4 command figures being in with the Pikes then instead of in with the Musketeers as they are now. 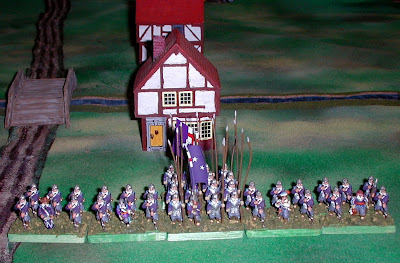 Next up is Lord Brooke's Regiment of Foot, recorded as having *purple* coats, at least early in the war. Now you know there is no way I could  resist something like that! White stars are used as the badge on these standards. 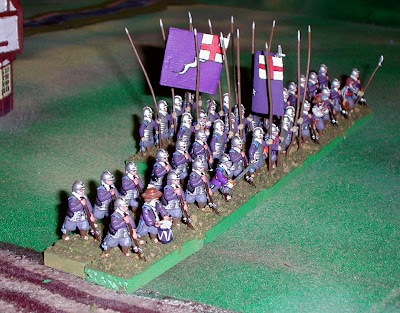 Note the various drummers, Fifers, and officers in the front ranks. The Musketeers are in the "loading" pose. Baron Brooke was an ardent Puritain, and commanded Parliamentary forces in Warwickshire and Staffordshire; there is also a Connecticut connection, as he was involved in the founding of the town of Saybrooke, Connecticut. 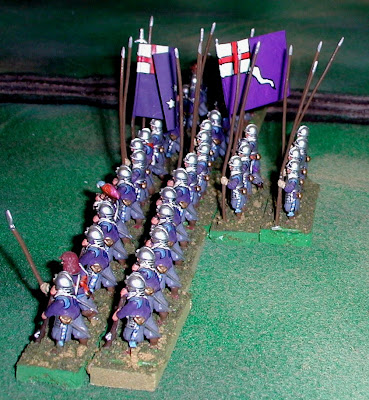 Note the many ornamentations added to the dress of the troops- shoulder "wings", stripes and buttons on the side of the pants, tabs at the top of the hose... these probably didn't survive the first few months on campaign, if that... but they sure are purty! They would have been rather frowned upon as frivolous by the Puritan faction, I'd imagine, but then as now, a smart uniform can aid recruitment! Note also the bareheaded officer with spontoon and orange sash at lower left.