'Tis Better to Give than to Recieve 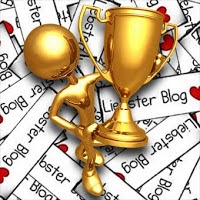 If you follow the wargames Blogosphere, you've doubtless been noticing the appearance of this award in our circles. Garry at Sgt Steiner's blog was kind enough to nominate "Blunders" for this honor. Gary's blog is always fun to read, and lately he's been doing some miniatures gaming again as well as all those boardgames!  :-) Thanks, Garry!

Pursuant to the terms of the award, I will cite the rules:

The rules of the Leibster Blog Award are very simple:

So, of course this is a bit akin to a blog chain letter or even Ponzi scheme, LOL. As there's no cost except my time, and there is never any harm  in passing out some recognition, I'll play along., although at this rate the number of nominations will reach into the thousands before the end of the year!  :-)

1) As Garry has already nominated Brent Oman's Blog, I certainly have to nominate Dave M's Santa Clarita Wargamer blog. His painting is excellent, as are his battle reports, and his enthusiasm for all thing Piquet is almost as infectious as his enjoyment of alcoholic beverages at conventions. :-)  Well deserved, Dave!  Skoal!

2)  Dartfrog's Adventures in 6mm  While I am not a fan of 6mm figures personally, his posts are interesting, especially his recent ones on converting Samuari Battles (a C&C variant) for the tabletop. My absolute favorite posts, though are the series of games he ran for his six year old son for Halloween, pitting King Mason and his troops against the Forces of Darkness. If we were all this good and creative at involving our children in our hobby, we would never have to talk about it "graying" again! A tip of the bicorne to you!

3) Wargamer Rabbit's Blog  Michael's (aka WR) blog doesn't show on my blog roll, simply because it is a wordpress site and thus I can't "follow" it via Google. WR is roughly of my generation, and speaking of involving your son, his young adult son, Daniel, is being taught the ropes of Napoleonic command as told in the recent battle reports. WR has started working his way through the battles of Napoleon's first Italian campaign. I can't wait for more of  his scenarios and battle reports. Besides, I think Michael may have more old 25mm Minifigs in his Napoleonic collection than I do! Highly recommended.

4) Super Galactic Dreadnought Desert Scribe's blog which focuses on Science Fiction and Fantasy gaming. Although my primary interest is Historical gaming, I share his love of the Superior Starfleet Wars ships. Now as a physician, I should hold his being an attorney against him, but hey, mys sister is one too. Some times it happens to the best of us! Anyway, his blog got my starships back on the table, and some long unpainted ones are being completed. Thanks!

5) Wargaming in 28mm (and sometimes smaller)  John's excellent blog, largely but not exclusively Napoleonic in focus. Although John has posted a great many of pics his units to his blog, I have far more myself. Only problem is, his are much better painted!  :-)  John's posts are always well written and interesting. That aside, he's a fellow physician, and there aren't too many of us Doctor-Wargamers out there. Well done, John!

Many other blogs I might have cited have already been nominated, and there are still more I could have added to the list above. Congratulations, all you winners!   :-)