The Royalist faction had the upper hand in the Cavalry arm, at least in the early years of the (First) English Civil War;  indeed the nick name for this faction was the "Cavaliers". Under the leadership of Prince Rupert, among others, they were said to favor the more impetuous charge at speed, and the use of the sword over the pistol. 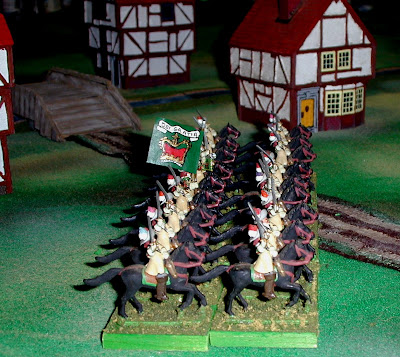 This is Lord Lucas' Regiment of Horse. Cavalry were often found more as an assortment of semi -independent troops rather than larger, than formal regiments, although there were certainly exceptions. For the sake of simplicity, as well as maintaining the "Toy Soldier" look, my Cavalry units are organized into large-ish regiments. This regiment wears buff coats, which is both a color and a heavy fabric that offered considerable protection from sword wounds. 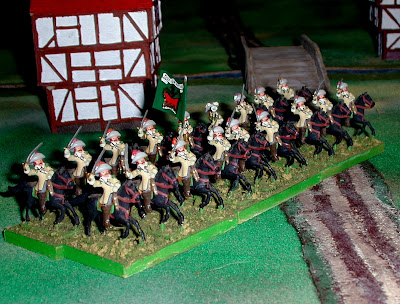 Quite a dashing appearance, and pretty stereotypical of Royalist Cavalry. Most cavalry flags in the ECW, called "cornets", were more in the fashion of political cartoons than the relatively formalized designs of the Infantry flags as covered earlier. These monarchists bear a flag with the royal crown, and over it a scroll reading "Dei Gratia", "By the Grace of God",  referring to the Divine Right of Kings. 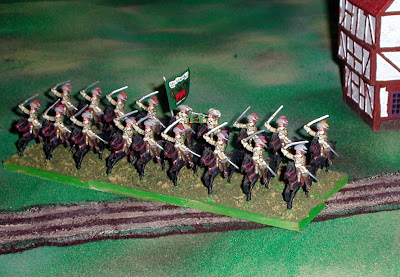 The plumed hats and green ornaments on the coats make this a natty looking unit indeed! 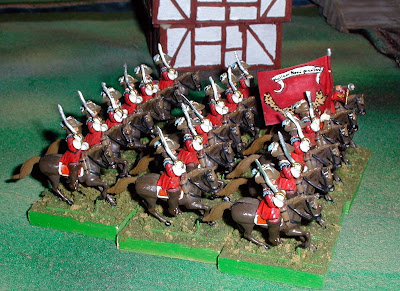 Next up is Sir Marmaduke Rawdon's Regiment of Horse (have to love that name, eh?). They wear red coats, but are in the closer order usually associated with "shooters", cavalry that use the Pistol as their primary weapon, and charge at the trot instead of the gallop. 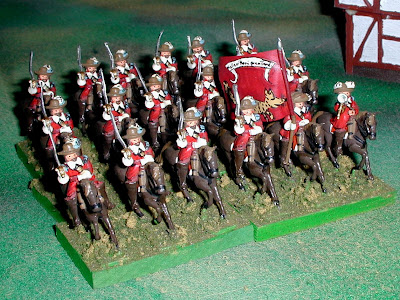 I can't recall what magazine I got the flag from years ago, but the Latin legend is "malorem mori quam tardi" more or less meaning "the evil die slowly", referring to a leopard that changes his spots, i.e., ill fortune to those forgoing adherence to the Royalist cause. 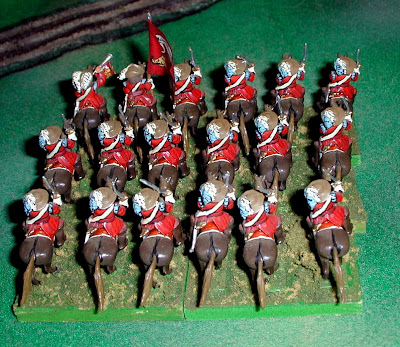 A rear view of the regiment in deep formation, showing off the plumage on their hats, and presumably preferring to use their pistols as their primary weapon (sometimes also called "Trotters").

Peter
Posted by Gonsalvo at 8:33 PM