While certainly the members of the Parliamentarian faction had a variety of reasons for opposing the king, a large sub group of them was the Puritans, well know to us in America as the settlers of the Plymouth Plantation in Massachusetts in 1620, more than 20 years before the beginning of the English Civil War. Thus Thanksgiving Day is certainly an appropriate occasion for my next post regarding my parliamentarian troops, this time the first group of my Roundhead cavalry. 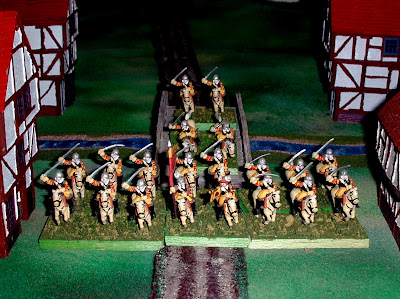 Once again consisting of vintage Minifiigs from the m,id 1970's this 20 man strong unit is Alexander Popham's Regiment of Horse. The costume is based upon the illustration in the Almark book non The English Civil War by R. Potter and G. A. Embleton, published in London in 1973.

I have jazzed up their yellow/buff coats with red "rings" on the sleeves, a common form of embellishment in this era. The flag bears the motto "Cave Adsum", which more or less means "Beware; I am here!" and is the motto of a Scottish clan, among others. It has been so long ago that I painted these guys that I have no idea if the flag is properly associated with this unit, but I suspect not! 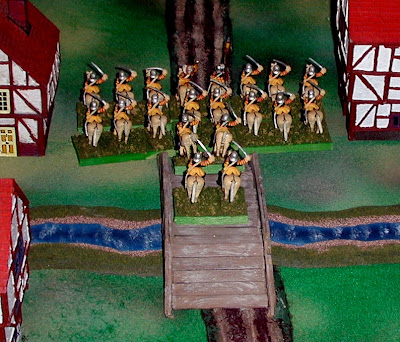 A rear view of the Regiment deploying into line after crossing a bridge; the back and breast plates are blackened, which makes a nice contrast with the yellow coats! 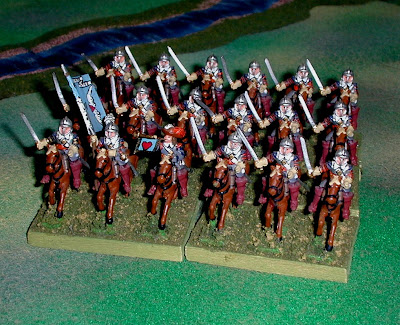 This next regiment is the Earl of Denbigh's Regiment of Horse, sporting more somber grey coats. 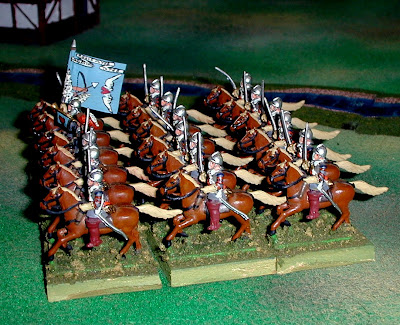 Unlike the rather stylized designs of the Infantry flags, Cavalry flags during the English Civil War were often most akin to political cartoons! This one has the scroll inscribed: "Charles thus Peace Flyes to The" (spelling was not yet standardized in the 1600's!); once again I am unsure this particular flag is properly associated with this specific unit. 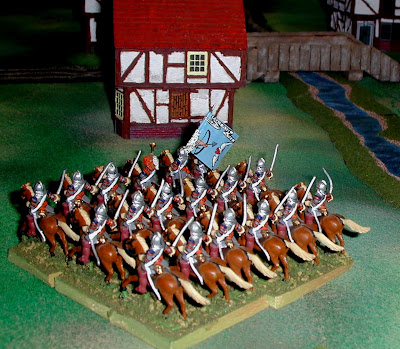 The Earl's regiment is based as Trotters, favoring the use of the Pistol. Their coats are adorned with orange-tawney rings on the sleeves, as well as sashes of the same color.

A very happy and blessed Thanksgiving to all my American readers. As for the rest of you, I am always thankful for your readership and participation here!

Peter
Posted by Gonsalvo at 4:15 PM