Of Dice and (Tin) Men - Maps and Monsters

By now I was in High School and started working as a counselor at the local Scout Camp, a job which continued for four summers on into college. I spent an hour or so a day after lunch painting my armies at the Staff tent. As intended, in addition to getting a lot of troops painted, this lead to several of the older Scouts expressing an interest in the figures and game itself, and by the end of the summer, I finally had the start of a group of 4-5 of us who began playing the rules regularly up in my attic and having a blast; the three of us who were Scouts all became Eagles along the way as well. These guys would remain my friends and main wargames group for the next 20+ years, until one fellow moved to Arizona and another to California. Of course, as a rules junkie, I was always modifying and tweaking the rules, often with ideas stolen from the latest new rules release.

Very early on, Charlie D. and I played out a simple campaign. We drew a map on a piece of poster board, each of us having 4 cities plus a capitol. Terrain on the strategic map was limited to a few rivers, and a road grid. His cities and rivers had Germanic style names, and mine French. To keep things simple, all movement was along the roads, and orders were written secretly for each of our armies (each represented, IIRC, by Mah Jong tiles). If an army's "supply line" was cut, it had to retreat the way it came and attempt to open it back up again. When two armies came in contact, a map was drawn at random from a pool of about 2 dozen generated in advance. Each player also drew an envelope, which had an Order of Arrival pre diced for - a quarter of the army would start on the table immediately, the second 1/4 would come on a D6 roll later, the next 1/4 a D6 roll after that, and the final 1/4  a D6 roll after that - thus the latest your last troops would arrive would be turn 19. Now, we were allowed to look at the maps and our own Orders of Arrival, but not the enemy's!  If you wished, you could withdraw 1 move ( a week) without penalty, or offer battle. Each made this choice secretly, and of course without knowing the other guy's order of arrival. On balance, I was lucky with my Arrival cards, and Charlie wasn't! If you lost a battle, your army had to retreat TWO moves, and lost 25% of its strength. If you fought a battle within a move of one of your own cities, you were allowed an additional 25% strength added to your army, but it had to all be Militia.

Not long after that, we discovered the Warplan 5/5 system, sadly long out of print. It was not until 20+ later that I found out that Bob Jones was the US distributor for this product. Anyway, in a nutshell, the heart of the system is the map cards - 30 of them, numbered 1-30, and printed on both sides (thus A side and B side), for 60 different cards in all. A set of three Island cards (31-33) were also available (and we used them, too). Each 5" x 5" map card is gridded into twenty-five 1" squares, each numbered for reference. The terrain on these cards is quite detailed, and is further enhanced by the Atlas, which lists each card and gives additional details on every 1" square, even sea squares. Wow! Once a battle was joined, a 1" map square became a 5 foot by 5 foot square area of tabletop. The set also included counters for land, sea, and supply units, pads for tracking everything and issuing orders, and a weather grid and tables, as well as movement and scouting rules. 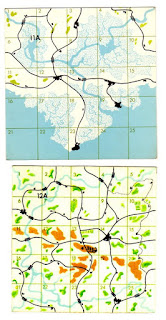 Two sample map cards from Warplan 5/5.The seaside resort of Wimate is in 11A.23, while Fort Wheeling is in 12A.13; believe it or not, I picked this pair at random from the thirty available... after I had already written the text!
﻿


So, we dove in, creating a map with 4 countries, playing as 2 sets of Allies. I had Rigel and took the blue counters (and French troops),  Charlie D. was my ally this time with his nation of Das Vidanya and took the red counters (and British troops), while opposing us were Paul Y. who had the green counters and Russian troops, while his ally, Chuck G. had the yellow counters and Austrian troops. I can't say I recall the names they gave their countries. Charlie's future wife acted as umpire, and she was tough! :-) My sister was not above spying on our "situation map", and giving intelligence to Paul and Chuck, who were her classmates! We each also had a substantial Navy, and these played a significant role in the campaign, generating some very memorable naval Squadron actions, which we played out using Dave Arneson's "Don't Give up the Ship" rules (and Jack Scruby's 1:600 Sailing Ships, complete with detachable Masts), most notably the Action of Wimate. 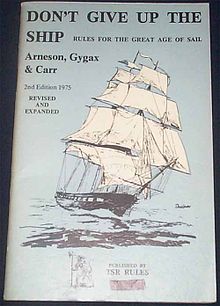 I couldn't find my first edition copy (1972 by Guidon games); this is a picture (from Wikipedia) of the second edition, published in 1975 by TSR.  Don't Give Up the Ship was the first collaboration between Gygax and Arneson, preceding Dungeons and Dragons!

The culminating battle of the campaign was the Battle of Wheeling, which featured a fort on the tabletop, siege guns, and an 18 foot long table. Memorable in that action was Charlie's newly painted British Rocket troop opening fire for the first time ever. In Frappe!, when you fire a rocket, you choose a number of dice to roll, up to ten D6, IIRC....  whatever score you roll is how far the rocket travels, in 3" hexes. The rocket goes straight the  first 4 hexes, but for each hex thereafter, you roll a D6 - 1,2 it goes 60 degrees left, 3,4 straight, and on a 5,6 it veers 60 degrees right. Cavalry passed over by rockets have to check morale, and in the final hex of flight, another roll is made: on a 1,2, or 3 the rocket fails to explode. On a 4 or 5 it bursts on the ground, and any unit(s) in that hex have to dice for casualties. On a 6, though - air burst!  All units in the target hex *and* the six adjacent hexes must check for hits! So, Charlie rolled ten D6 and the rocket snaked its way six feet across the table, ending in the hex with Paul's newly arrived and also just painted Russian Chevalier Guard Cuirassiers. Charlie rolled the D6 - a SIX! The airburst hit the Guards, they failed morale, and routed off the table, never to be seen again. Of course, on the next shot, a similar handful of D6 dice rolls resulted in the rocket reversing course and landing in the same hex as the Rocket battery itself. This time, the D6 roll resulted in a ground burst, which destroyed the rocket battery... an oddly poetic form of miniature justice!

A sample page from the Warplan 5/5 Atlas
﻿
Anyway, we fought dozens of battles and at least 4 campaigns (two with Warplan 5/5, and the fourth with a hex map we drew ourselves) with tabletop rules still essentially based upon Frappe!  We also began playing Dungeons and Dragons regularly. This was quite a feat at first, as the original rules were extremely vague as to how combat would actually be carried out! No problem, we adapted Arnold Hendrix's "Sword and Spear" skirmish rules to D&D for a much more tactical approach to personal combat. I won't say much more about D&D, except that we had a blast with it, and my character was a Lawful Good Cleric by the name of Virelon... perhaps foreshadowing my future choice of Medicine as a career! Our painting skills also improved as we painted individual figures for our characters, faithful followers, monsters, and, of course, the local color. We also built not one but TWO model castles, and used them for some large scale battles that resulted from our intrusion into the land that had once been a monster infested wilderness.  One year, we even had a Christmas party where all six of us that played came dressed as our characters (long blue robes, a blue red/yellow Bishop's miter, mace and crosier, in my case), and each of us did a song parody based upon our imaginary world, "Eingeladen". "Tilandor, the Copper Dragon, lived on a noll; and frolicked in the Northern mists, eating Goblins, Orcs and Trolls!" Tilandor was a NPC, and proprietor of the local trading post; he was well known to palm off cursed magic items to unsuspecting players at "bargain" prices! 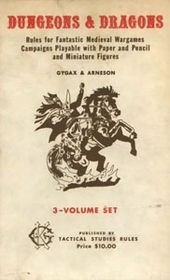 The Original D&D; image again from Wikipedia, but identical to my own copy, except that my cover says "Price $3.50" at the bottom (3rd printing - April 1975). IIRC, the three volume boxed set was $10 together.
﻿

It was also during this time that I attended my first Wargames Convention; I think it was 1971, and the old MFCA (Miniature Figure Collectors of America) Wargames convention in Chester, PA (outside Philadelphia); I think the year I first attended was the last year it was held at the Armory before moving to the grounds of Widener College.  I do recall meeting Dick Bryant and Arnold J. Hendrick there at my first convention. I was probably just shy of 17 at the time - Charlie, who was several years older, did the driving.  This was pretty much a purely shopping, socializing and buying event for us; I don't think we ever played a game there. Jay Hadley was the chief organizer of these events. Still, we attended enthusiastically every year for many years. 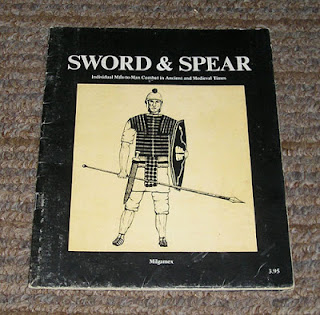 Sword and Spear, by Arnold J Hendrick, published in 1975. Image from Boardgame Geek, but my copy is identical. The appendix included rules for a variety of Mythological Creatures, Heroes, etc, which we adapted for use with our D&D games.  Mr. Hendrick was a member of the Boston based New England Wargamer's Association (NEWA), and a frequent contributor to the original NEWA newsletter, "The Courier". Who, having read them, can forget the tabletop exploits of the portly Roman general, Maximus Gluteus, and his somewhat limp-wristed Pontic adversary, Faggo Hermaphrocomedie?