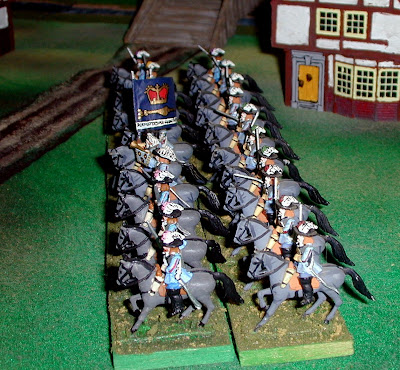 This first unit is Arthur, Lord Capel's regiment of Bluecoats, sporting the traditional plumed hats. There is a short biography of him here on wikipedia; a staunch supporter of King Charles II, he was eventually captured  in battle, and despite surrendering on condition of lifetime quarter, was executed on the order of Parliament in 1649. 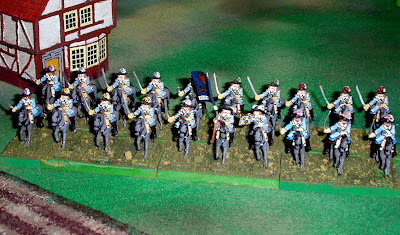 I gave each stand (troop) their own plume color, so the first has red and white, the second blue and white and so forth. They wear a showy  polished white metal cuirass. 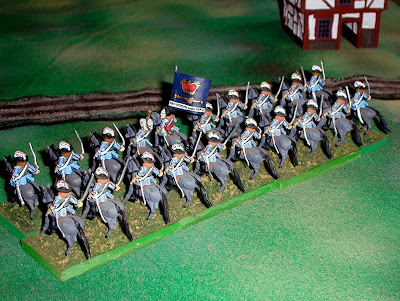 There flag bears a crown and scepter, and the Latin moto "Perfectisima Gubernatio", more or less meaning "Monarchy: the Best form of Government". This flag is well documented for this unit. 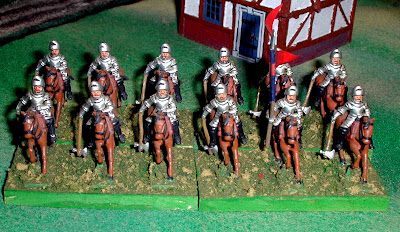 The second unit is the Gentlemen Pensioners, here seen as as a rather larger unit than was in fact the case ( in actuality only a little over 50 men at this time, the unit having been established in 1509, and having a largely ceremonial role). 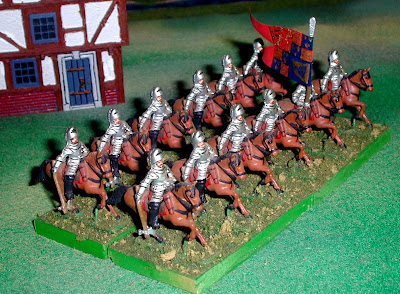 The unit fought for the last time as King Charles II's bodyguard at the Battle of Edgehill in 1642, but it still exists today, in a radically different uniform, as the Gentlemen at Arms. Giving them 3/4 armor as Lobsters is speculative, but it gives me an excuse to have a unit of them in my Royalist army. This kind of heavy armor was rapidly vanishing from the battlefield by this era. Note the cavalry axes, especially suitable weapons for fighting similarly heavily armored foes... along with their Pistols! 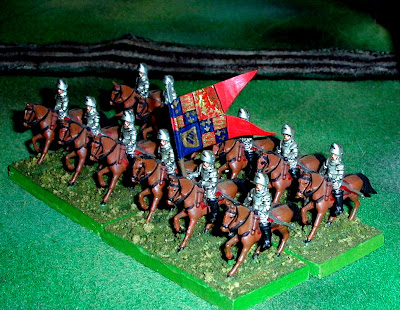 For their banner, I have equipped them with the Royal Standard, with the gold Harp of Ireland on blue, the red lion of Scotland on gold in opposite quarters, the remaining quarters themselves being quartered with the three gold fleur-de-lis on blue of France (indicative of the English crown's now exceedingly tenuous claims to the French throne), and the "three lions passant guardant"of the Kings of  England, gold on a red field. 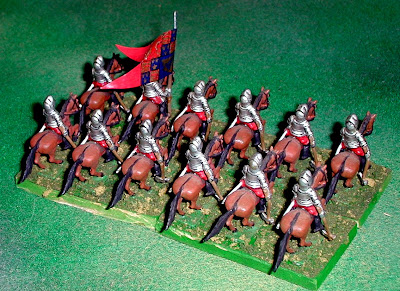 A final, rear view of the Gentlemen Pensioners; I have given them red pants, where visible. The India ink black lining  I used works well to bring out the details of the construction armor plates and helmets.