Of Dice and (Tin) Men - Origins

Among the earliest commercial wargames rules, of course, is H.G Wells' Classic, "Little Wars". This employed only individual figures, the 54 mm gentry that were the toy soldiers of the day. There was no organization employed whatsoever. A force was composed of so many figures each of Infantry, Cavalry, and a number of guns (which actually fired, knocking down the enemy and being the chief executioner on the miniature battlefield). Like most of us, it wasn't where I started in this hobby, however. 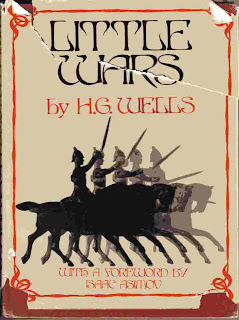 My reprint edition of the classic, originally published in 1913; clearly, it has been read more than once by its owner!


For as long as I can recall, I have loved games. My parents were avid Bridge players, and I eagerly learned to play when I was six or seven years old. My Dad taught me to play chess when I was age 9. He won the first game... but that was the last one he ever won against me, LOL! Particular favorites were the Milton Bradley American Heritage games - you know, Broadside and Dogfight, plus Stratego and Risk! My best friend from elementary school and I played Risk so much that we added Antarctica to the bottom of the map, with 3 provinces, worth 1 extra army, and with connections to South Africa, Argentina, and Western Australia, as well as a link between Madagascar and Western Australia to mitigate against the "Australian Strategy"; evidently the propensity to House rules started early!

I also acquired a love of History early on as well, enhanced by family visits to such places as Old Sturbridge Village in Massachusetts, Colonial Williamsburg in Virginia, Mystic Seaport in Connecticut and Fort Ticonderoga in upstate New York. I read many biographies and became particularly interested in Military History. When my Dad and I went out to the store  one Sunday morning to buy the old, fat, Sunday New York Times (usually accompanied by fresh doughnuts and/or bagels), I always went for the Book Review section first. One day there was a review of a new book - David Chandler's The Campaigns of Napoleon. I realized that (at about age 12) I knew next to nothing about the man, and sought out the book at our well stocked local public library. Well, that was it; I was hooked on Napoleon himself, and the Napoleonic Wars in general!

My own introduction to Miniature Wargaming proper came shortly thereafter, with the accidental discovery of Joe Morschauser's  book, "How to Play Wargames in Miniature", published in 1962, this time while browsing the local public library for books on Chess strategy. The book explained, in clear but incredibly exciting language, both the attractions and basic principles of playing Miniature Wargames, and gave simple, basic rules for the major periods. Mr. Morschauser also introduced the idea that your figures should be permanently glued to bases or stands, and in his rules, all combat with his rules was between stands, the number of figures mounted per stand being purely aesthetic, although he recommended 4 infantry, 2 cavalry, and 2-3 crew with a gun as a reasonable quantity. However, each stand was more or less considered a unit in and of itself; while he did recommend forming "Regiments" of 5 stands each, this was merely a matter of nomenclature, such organization having absolutely no impact upon the play of the game itself. 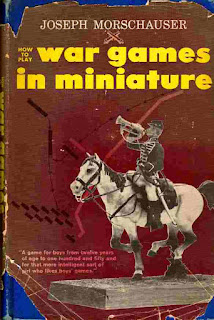 I was lucky to secure this copy of Morschauser's book many years after my introduction to the hobby  from a close friend of my Dad's, Dr. Edward Schortmann. He and his son dabbled in wargaming somewhat, but were really more collectors of figures and militaria. Sadly, his son was roughly four years my senior, and by the time I was really seriously into miniature wargaming, he had really lost interest in it, and was off to college. He became a professor of Archaeology!

In another classic wargames book, the late Brigadier Peter Young's "Charge or How to Play Wargames", the matter of unit strength and organization is made much more explicit. A generic infantry Regiment had a C.O., Color bearer, and three companies, each of one officer, one sergeant, one drummer, and sixteen privates - just one shy of 60 figures. Similarly, a cavalry Regiment had a C.O., trumpeter, and three squadrons, each of an officer and eight troopers - just shy of 30 figures. An Artillery battery had two guns, a C.O., ten crew and 2 officers - 13 figures in all, plus the guns. Similar regulations were set forth for Light Infantry and Militia battalions, and even Engineer battalions. Despite the large number of figures involved, all were based individually, none glued to stands as Morschauser had advocated a few years earlier. 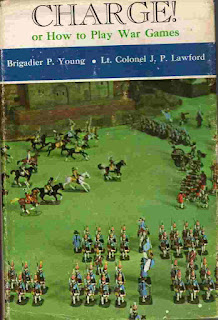 My personal copy of "Charge!", a gift from my Dad at Christmas in 1970, inscribed by him to me: "War" and "Charge" can have many meanings, but I hope this book has one - "Excitement!". Although Dad served in WW2, landing at Omaha Beach, and continued in the U.S. Army Reserves, eventually retiring as a Lt. Colonel in the Corps of Engineers, I regret that he and I never played a wargame together. I suppose he had seen enough of the real thing. Sadly, he passed away a few months ago, just two weeks shy of his 90th birthday. It is hard to read that inscription without some pretty intense feelings of nostalgia!

Curiously, although I read all three of these books many times, and still enjoy re-reading them, I never played a game using any of their rules. I shall have to remedy that some day! The first rules that I did actually use were "Fire and Charge", by that member of the Old Guard of wargamers, Jack Scruby. First published by Jack in 1964, it cost a whopping $1.50 for a 30 page spine stapled booklet. Jack's game called for an infantry Regiment to have six stands, #1 being Grenadiers and #2 being Voltigeurs/skirmishers; the number of figures mounted on each stand had no effect upon the play of the game, but 5 figures per stand were suggested (Jack was in the business of selling soldiers himself, remember!). Interestingly, it was also recommended that each stand also have a flag (not a standard bearer, but a separate flag) glued to it; these would be painted a different color for each Regiment (blue, red, green etc), *and* would also have the number of the company painted upon it as well. This was because Jack's game was a roster game, and each stand would lose combat value (CV) over the course of the game. A stand started with anywhere from 4 to 9 CV each. In played these rules solo a number of times, unsuccessfully trying to cajole my sister (who ultimately wound up having a career in the US Army also, retiring last year as a full colonel in the Army JAG Corps; she still works for the Dept. of Defense, but now as a civilian) into playing the other side. The rules were fun, fast, and bloody! These battles were fought out with my original armies - pre-painted 25mm KILIA-grade flats (Zinnfiguren) from Aloys Ochel in Kiel, West Germany. I had little confidence in my artistic abilities, and the price was right - DM 10,20 per box - about $4 then. I had  a bunch of French and some British to oppose them. Each box had 20 infantry (one a mounted colonel), 10 cavalry, or 10 crew and two guns. That pretty much set my own army organization: Infantry regiments of six stands of three, Cavalry regiments  of four stands of 2, and artillery batteries of 2 stands, each with a gun and 3-5 crew, all mounted on 1.5" frontage stands. 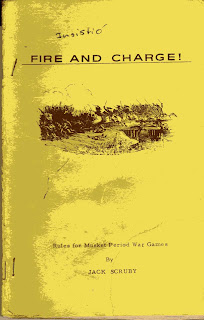 Another heavily used set; evidently I felt the need to take a sudden note on the cover while in Spanish class in middle school!  Like a recent post by Desert Scribe related, I also "customized" this booklet with my colored felt tipped pens, although in my case not by coloring in the line drawings, but with comments and notes about the rules, including several of my own "House Rules" already.


Around the same time, Dr Schortmann and his son invited my Dad and I to attend the annual meeting of the NY Military Collector's Society in NYC; the variety of uniforms and the superb paint jobs on the 54mm and larger figures and vignettes were incredible.  That lead to a desire to have more specific regiments, control over the facing colors used, etc., and  I acquired my copies of the Funken uniform books for the Napoleonic Wars (in French), as well as Knoetel's Handbuch der Uniformkunde (in German), and taught myself some of the basics of those languages so that I could understand them. . I ordered some 25mm French Chasseurs a Cheval from Jack SCruby, and painted them (a yellow faced regiment, I think the 6th); they didn't come out looking too badly, so I sold off my flats, and started painting Scrubys madly, at the rate of about 500/year. Another trip to nearby New York City with my Dad followed, and Polk's Hobbies, The Soldier Shop, and of course F.A.O. Schwartz were all visited in rapid succession. At The Soldier Shop, I found the new (published circa 1970) "Frappe!" rules by Ray Johnson (and conceived by none other than Duke Seifried, as part of his new wargames company, "Der Kriegspielers"). These rules, with production values that were pretty poor even by the low standard of the day, were just what I was looking for at the time. Detailed with being over the top, morale checks, range modifiers, a nifty Howitzer fire "grand hex" burst template, national modifiers, formations, etc - Napoleonic Wargaming Nirvana had arrived! These rules used a board gridded with 3" hexes, which I promptly made. The size of the units was another thing though - the troop ratio used in these rules was 1:10! A French Infantry *battalion* thus had 72 figures; a single company had 12 figures, on three stands of four each. In addition to being overwhelming in terms of cost and  painting time, there was no way there would ever be a table big enough for more than a brigade sized action! However, the organization I used for my flats was carried on to my rounds, and, for the French at least, this essentially corresponded to a 1:40 scale. Conveniently, that meant that one of my figures equated to a stand of 4 in their organization, so I used a Roster system and my 18 figure battalions. 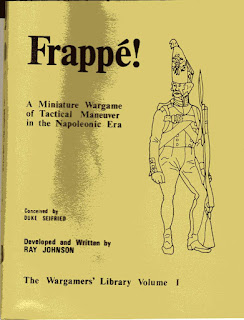 Now isn't that olive drab cover exciting? No? Well the rules inside were the foundation of most of our Napoleonic wargaming for almost 20 years!

So. now I had a reasonable start on armies, and a set of rules I really liked. My parents even gave me a ping pong table to play my games on (in the un-insulated attic), and I thought that was the greatest present ever (I still have it in my basement as the base for my present table). However, what I really needed was... an opponent! My dad while supportive, just really wasn't particularly interested in any games other than card games. I tried to cajole my sister into playing against me, but although she liked Dogfight and Broadside (and eventually went on to join the Army Judge Advocate General's Corps, retiring last year as a full Colonel). tabletop battles just held no appeal for her. My longtime best friend, who loved strategy games, unfortunately moved to Houston, Texas around this time. So I drew tons of maps of battlefields and imaginary countries, played some solo games, painted troops, and plotted!