Continuing on with my vintage, 1970's "new" Minifig ECW units, here are two more Parliamentarian Foote regiments; the Earl of Stamford's, and a regiment of London Trained Bands. 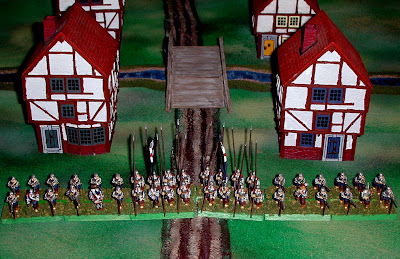 This was the first unit that I painted out of all my ECW troops. From the Regiment's US website:

Henry Grey was created Earl of Stamford in 1628. A zealous Parliamentarian, he was the first man to be declared traitor by King Charles. By the start of the war in 1642, Stamford had raised a regiment of foot and a troop of horse.

The regiment saw early action in the West Midlands and Welsh borders. Battles in 1643 included those in Evesham, Gloucester, Worcester, Sudley Castle, Tewkesbury, and Hereford. Gloucester was held against the Royalists through 1644, when the regiment went on the offensive against Littledean, Westbury, Newnham, Wilton Castle, Malmesbury and Tewkesbury. More heavy fighting took place around Gloucester and all up and down the Severn.

In 1645 the regiment negotiated with the Clubmen, and fought Royalists in the forest of Dean, later taking Evesham by storm. In May the head of Stamford's, Lt. Colonel Massey, was appointed General of the Western Association, and soon after the regiment reorganized for the New Model Army and became Colonel Charles Blunt's Regiment (Blunt was originally the 3rd Captain). 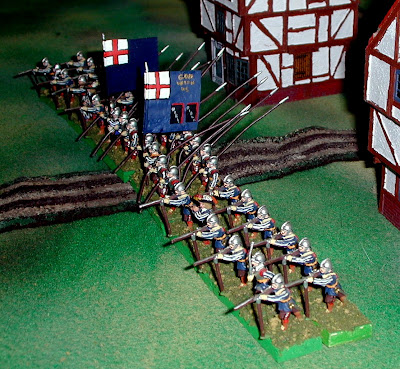 I have equipped the Regiment rather nattily, with slashed sleeves showing the white linen shirt underneath, red wings sewn on for the pikemen, and red "apostles" on their bandoliers for the Musketeers. 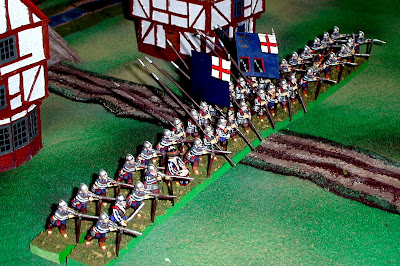 I chose to use Bibles as the Company distinctive mark for this regiment; I can't recall, but I doubt I had any particular justification for the choice;. The US re-enactment group uses white unicorns. 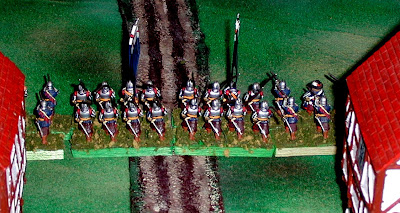 The Earl of Stamford's regiment also has a U.K. re-enactment regiment in the Sealed Knot, in fact the oldest Parliamentary regiment in that organization, having just celebrated its 40th anniversary. More can be read about them at their website here. 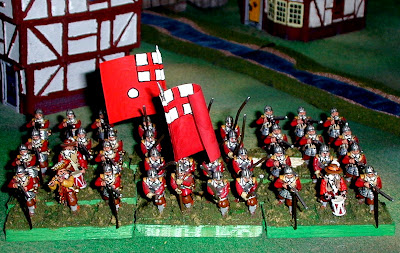 Next up is the "Red" regiment of the London Trained Bands. These troops were as close as the British crown came to a standing army before the Civil War. They were composed of local citizens, probably mostly tradesmen, who drilled on a regular basis but carried on with their normal occupations otherwise. Like the bulk of ther city of London itself, they espoused the Parliamentarian cause. 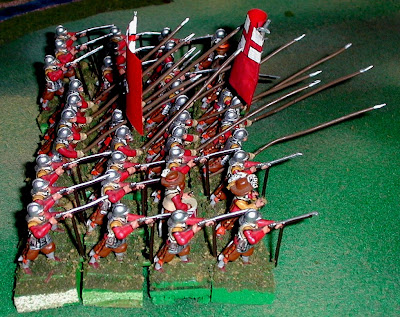 Technically, the "Red" regiment is only known to have had red flags. I have chosen once again to portray them far more uniform and well equipped than was likely the case in reality; I plead Wargamer's License!  :-) The Musketeers are wearing sleeveless buff coats, with long red shirts or jackets underneath. 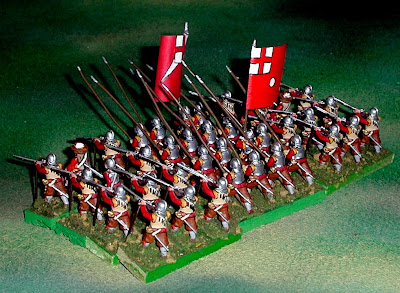 There is a Tower Hamlet's trained band Regiment in the Sealed knot as well; their website here has a host of truly excellent pictures of re-enactors; highly recommended. "Jehvah Provide Bit!"  (motto of the Regiment).
Peter