The Norwegian and Danish Liv (Life) Regiments were among the oldest in the army, and considered a step above the rest. Other than their straw yellow facing color, their uniforms were identical to the rest of the Line regiments. The organization of the Liv regiments was essentially identical as well.

The Kings Lifeguard of Foot

Den Kongelige Livgard til Fods consisted of a single battalion of 4 companies, 120 - 160 men each. They were stationed in Copenhagen and saw action only against the British invasions of 1801 and 1807.

Their uniform consisted of a red coat with long conventional tails (unlike most Danish troops of the era).  The  conventional turnbacks were white, and the collar cuffs were light blue, piped with silver lace. There were 4 wide bands of silver lace across the front of the coat. Buttons were silver, as were the shoulder straps. Cross belts were white with a silver plate where the belts crossed. Cartridge boxes were black with a small silver grenade in each corner, and a silver plaque with the royal cipher in the center. Pants were dark blue in winter, white in summer.

A black bearskin was worn, with white cords and a white plume with a light blue tip. The front was decorated with a silver plate bearing a gold coat of arms. The bearskin had a peak. The bag on the back was light blue with white piping and tassel.

Officers dressed the same as the men, except that they had gold cords on their bearskins, silver epaulets, and the usual red and yellow striped sash.  When dark blue pants were worn, they were decorated with a silver stripe down the outside seams, as welll as silver "Hungarian knots" on the front. 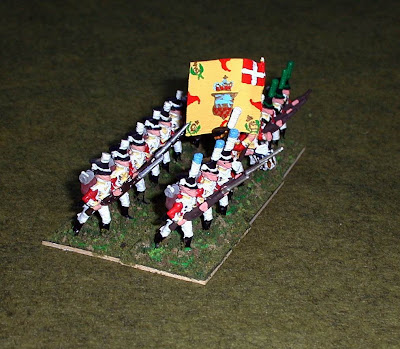 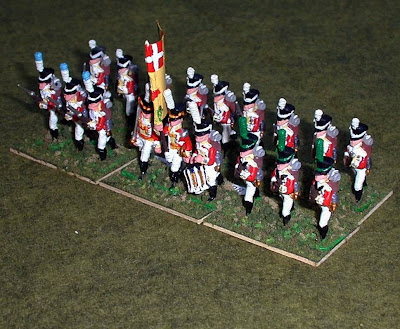 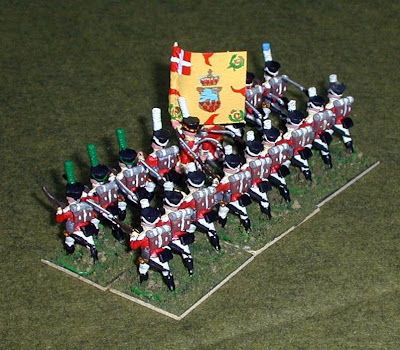 This regiment's grenadiers have abandoned the bearskin, as ordered in 1813, wearing instead the tall, white plume with a light blue tip on their shakos. 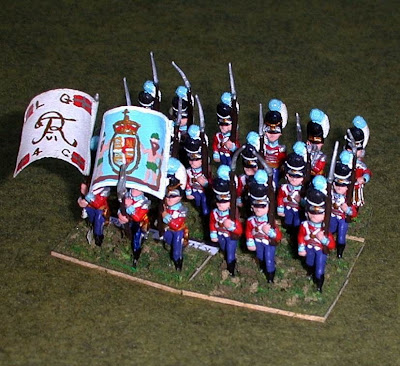 The King's Livgard of Foot (Den Kongelige Livgarde til Fods). The more ornate standard has the Royal Arms of the Kingdom of Denmark. 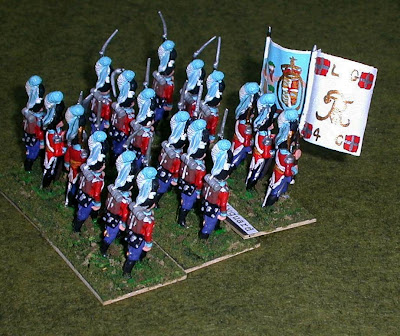 Note the ornamentation on the cartridge boxes. 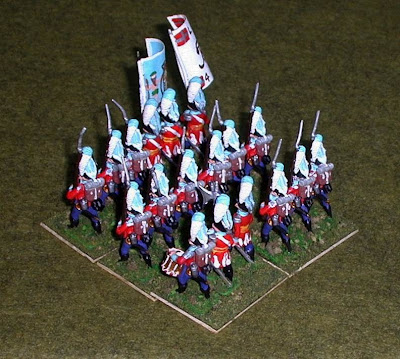 The dark blue pants look very sharp with the red coats and the light blue facings and bags on the bearskins, I think!  Fit for a King, as it were...


Next time - The Danish light cavalry

Peter
Posted by Gonsalvo at 1:10 AM