In contrast to Norway and Sweden, Denmark is rather flat and actually quite suitable to the operation of cavalry. Thus, the Danish Army included a fairly good proportion of it.

Organization of the Danish Light Cavalry

There were three regiments of Light Dragoons in 1801, each of four squadrons. Book strength for the squadrons was 160 men, but they averaged closer to 120 men in the field. A fourth regiment was added in 1808. There was also a Hussar regiment of 4 squadrons, later increased to 6 squadrons. The regiment also included an additional single squadron of Lancers, the Bosniaks.

Uniforms of the Danish Light Cavalry

The Light Dragoons (Lette Dragoner) wore a short red jacket, similar to that worn by the infantry. All regiments had buff colored frontal turn backs (long jackets and conventional turnbacks for officers, once again) and white metal buttons. A "Tarleton" type helmet was worn. The turban on this varied in color by the regiment, as did the facing color which appeared on the collar, cuffs, lapels, and shoulder straps.  A white plume tipped with red was worn on the left side of the helmet until it was abolished in 1813. Pants were dark blue with a broad red stripe down the outside seams, with white metal buttons. The shabraque (saddle blanket) was red with white  (silver for officers) borders and ornamentation (see drawing). Officers wore silver epaulets and the crimson and yellow striped sash until 1812, when both were officially discontinued and replaced by rank markings on the sleeves similar to those used by the Infantry (see Part 3 of this series). Boots and cartridge boxes were black, white belts. Trumpeters had wings in the facing color with piping and tassels in the piping color, and may have had red crests on their helmets.

*Raised as the Zealand Regiment in October 1807; renamed in December 1807

The Danish Hussars wore a fairly standard Hussar pattern uniform, with a light blue dolman with carmine (red) collar and cuffs, with white lace piping. The Pelisse was carmine red with black fur, buttons and cording were white. A red and white barrel sash was worn. Belts were brown leather. Fawn coored pants, dark grey with a red stripe and buttons down the outer seam for undress wear. Shabraque was carmine red with a light blue "vandyking" pattern to the border, piped in white . Sabretche was light blue with white royal monogram in the center, red "vandyking" border piped in white. It was suspended by red slings with white metal fittings.Harnesses were black with whiite cockle shell ornamentation.

Headwear was a black "Tarleston" type helmet with a red turban and a white plume tipped in red on the left hand side from 1801 - 1807;. In 1808, a tall black cylindrical shako was adopted, with white tape ornamenting the top and bottom, and in a diagonal across the front. A silver badge with a red center was worn on the front of the shako. Thin red cords were worn on the shako (red mixed with gold for officers). Evidently a black fur Colpack in the French style was another authorized option for head wear.

Officer's dress was similar to that of the men, except with silver substituted for white. I have no information about the dress of the trumpeters.

This squadron of Lancers attached to the Hussras had a uniform in similar colors. From 1801 - 1807 they wore a rather exotic uniform, with a light blue cossack style jacket, with red facings. An Arab style red Fez with a white turban and white ostrich plum feathers was worn on the head. The pants were light blue. There is an image of this unusual costume, which differs in some details from the above, in the NYPL collection, here.

From 1808 -  1815, the uniform changed to a more standard Uhlan style, with a light blue jacket and red facings, light blue pants, and a cazpska with a red top and white plume. Shabraque was probably the same as for the Hussars. Lance pennons ?? red over white. No information is available to me about the dress of the officers or trumpeters. The only picture I could find of this later style uniform is this one, again from the NYPL collection; I have doubts as to it's accuracy.


Now, on to some pictures! 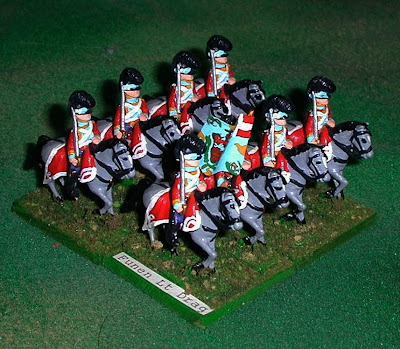 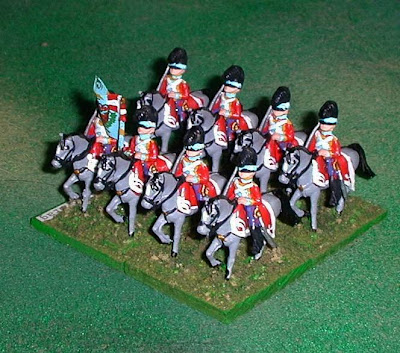 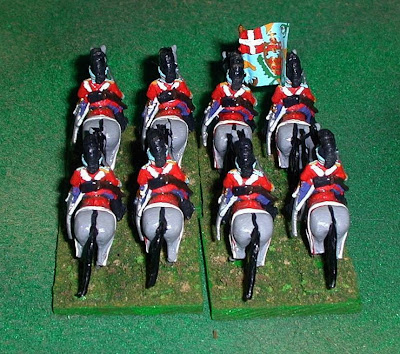 Once again, the pairing of the red jackets with the dark blue trousers is very attractive! 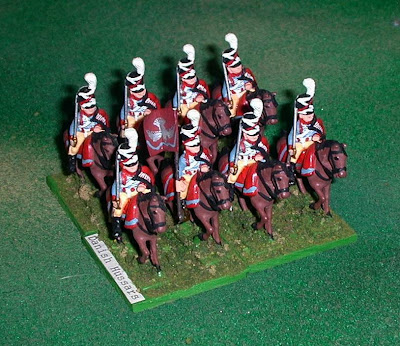 The Danish Hussars (Hussarregiment). I can't recall if these Minifigs were specifically designed to be Danes or not. 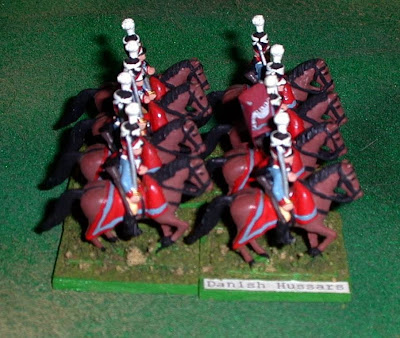 A somewhat blurry side image. At the time when I painted these troops, I didn't have the detail about the saw toothed edge to the shabraque available to me. 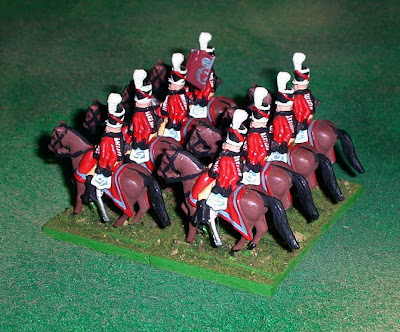 Likewise the sabretache was painted without some of the details I posses now. Still, quite a handsome unit! 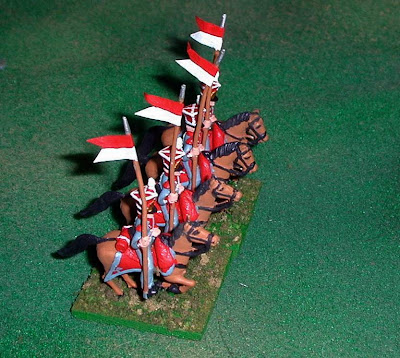 The Bosniaks - a single squadron of Danish lancers! 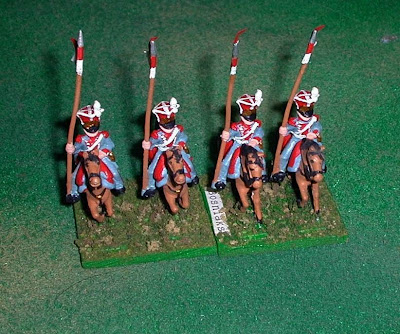 These are Minifigs Grand Duchy of Warsaw Line Uhlan figures, IIRC. Some of the details of how I have painted them are necessarily somewhat speculative, given the limited information available. 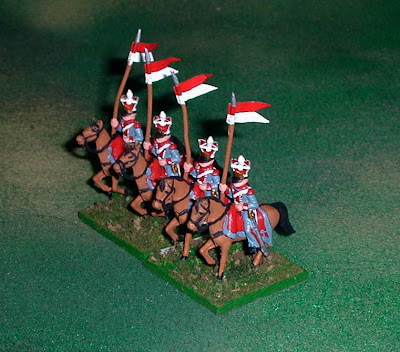 I think you could drive your local Grognard crazy asking him to identify *this* unit on the tabletop, eh?


Next time - the Danish Heavy Cavalry

Peter
Posted by Gonsalvo at 1:01 AM