Well, it's about time I posted something painted recently, eh?  These are the first of the units I am painting for the 100 Days Campaign project, and then eventually, Peninsular War as well. As such I chose to go with the earlier shakos rather than the later "Belgic" pattern. This was probably a good choice, as it seems that very few of the new pattern made it to the Penisnsula, even by 1814, and evidently at Waterloo many units were still wearing the old "stovepipe" shakos seen here.

First up is the 24th or 2nd Warwickshire Regiment. 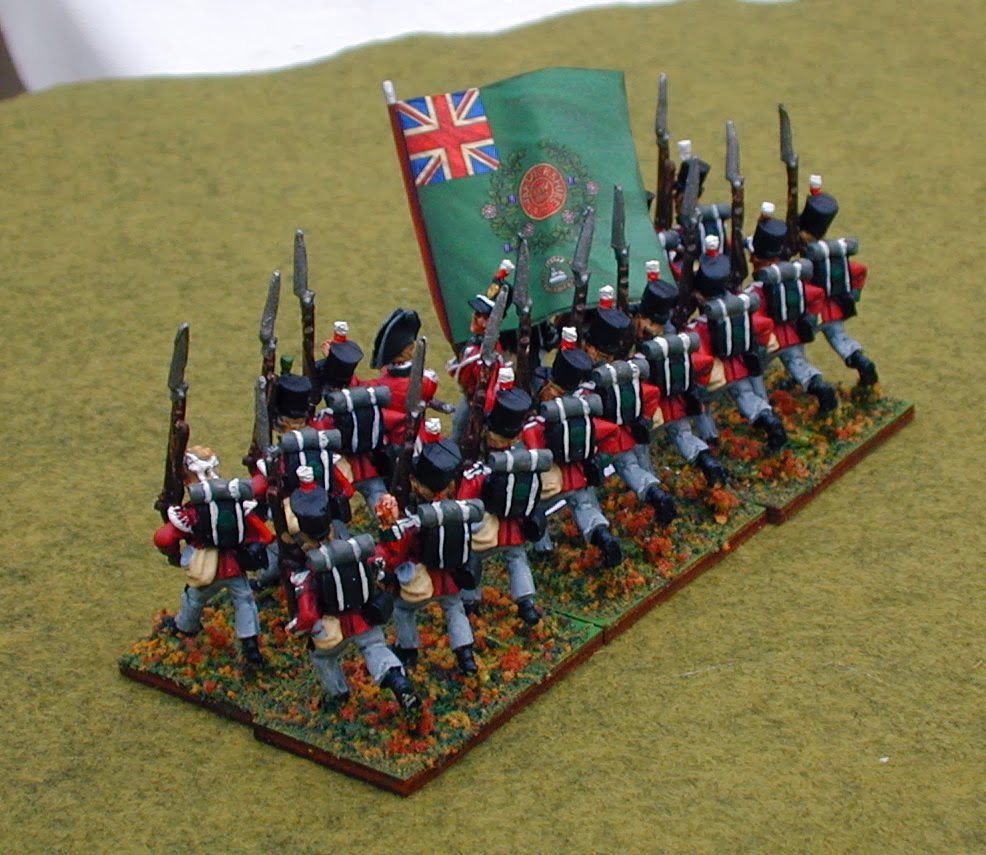 This regiment had green facings, in this case evidently a dark to blue-green hue. 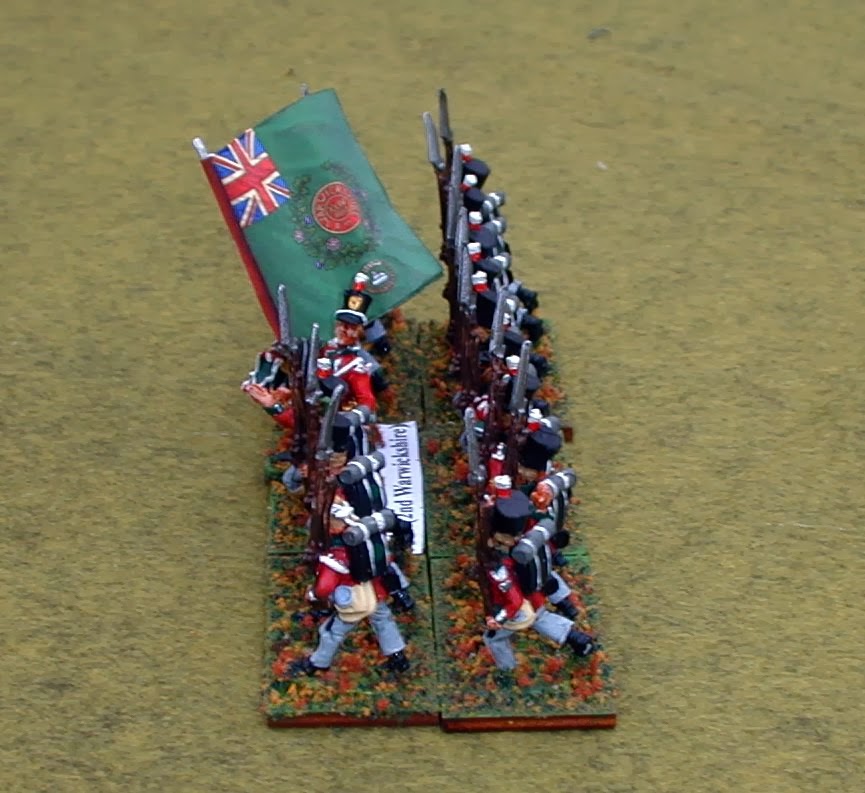 Their coats had square loops in pairs. 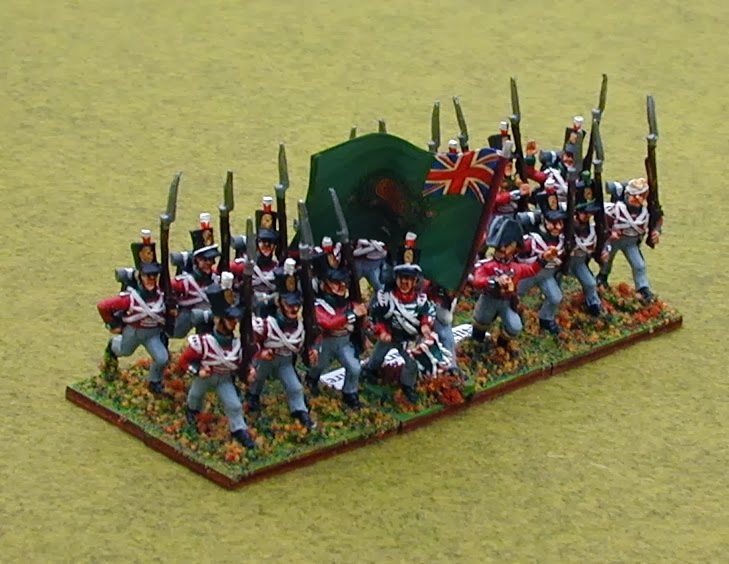 The drummer wears reversed colors, that is, a dark green coat with red collar and cuffs, wings, and white lace decorations.  Woo-hoo! 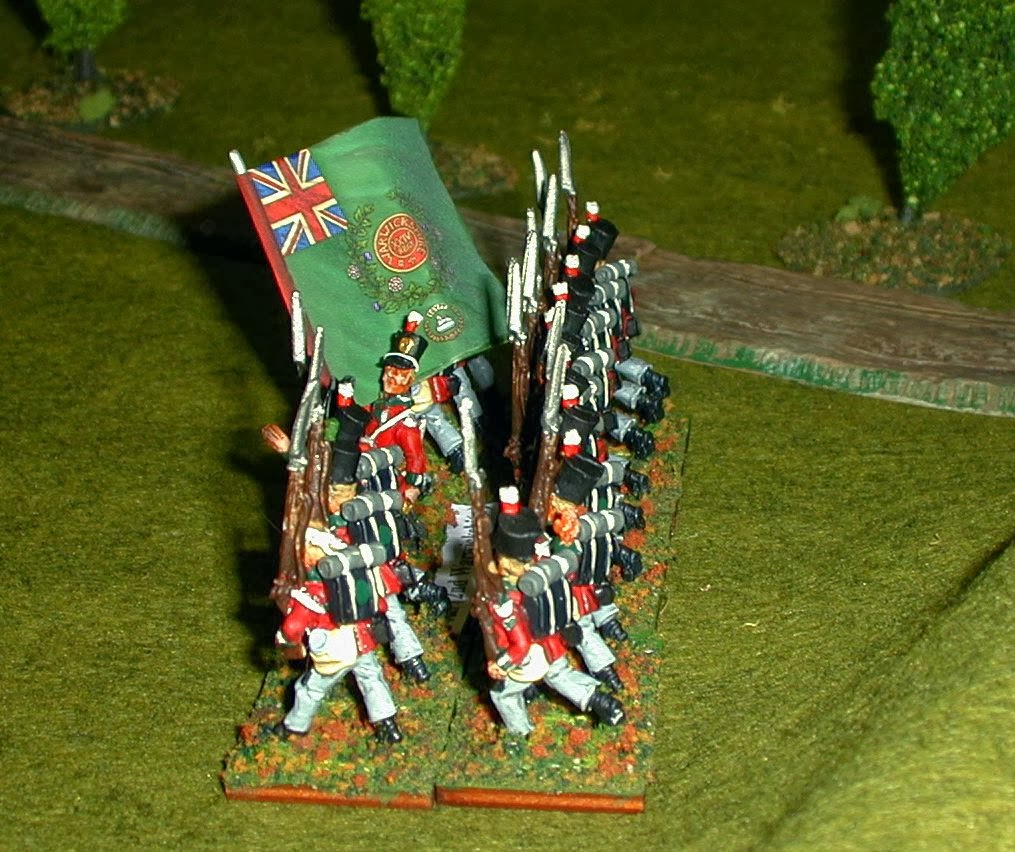 Compare the next set of photos, taken inside with flash under fluorescent lights, with those above taken outside in the morning on an overcast day. 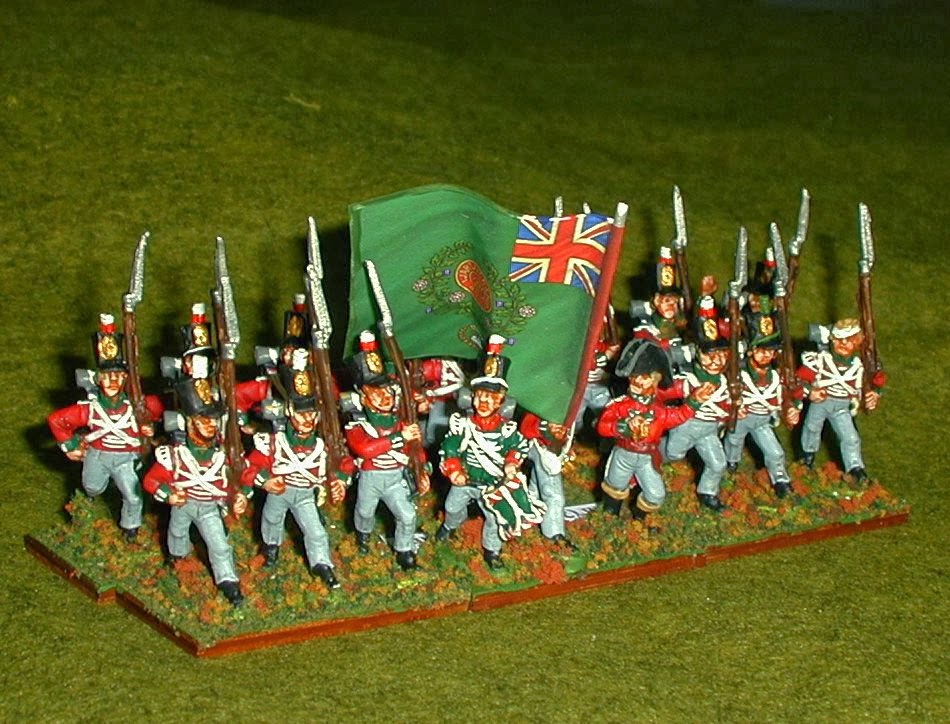 The officers of this unit had silver lace. Note the wings on the Grenadiers (white plumes) and the Light company (green plumes). 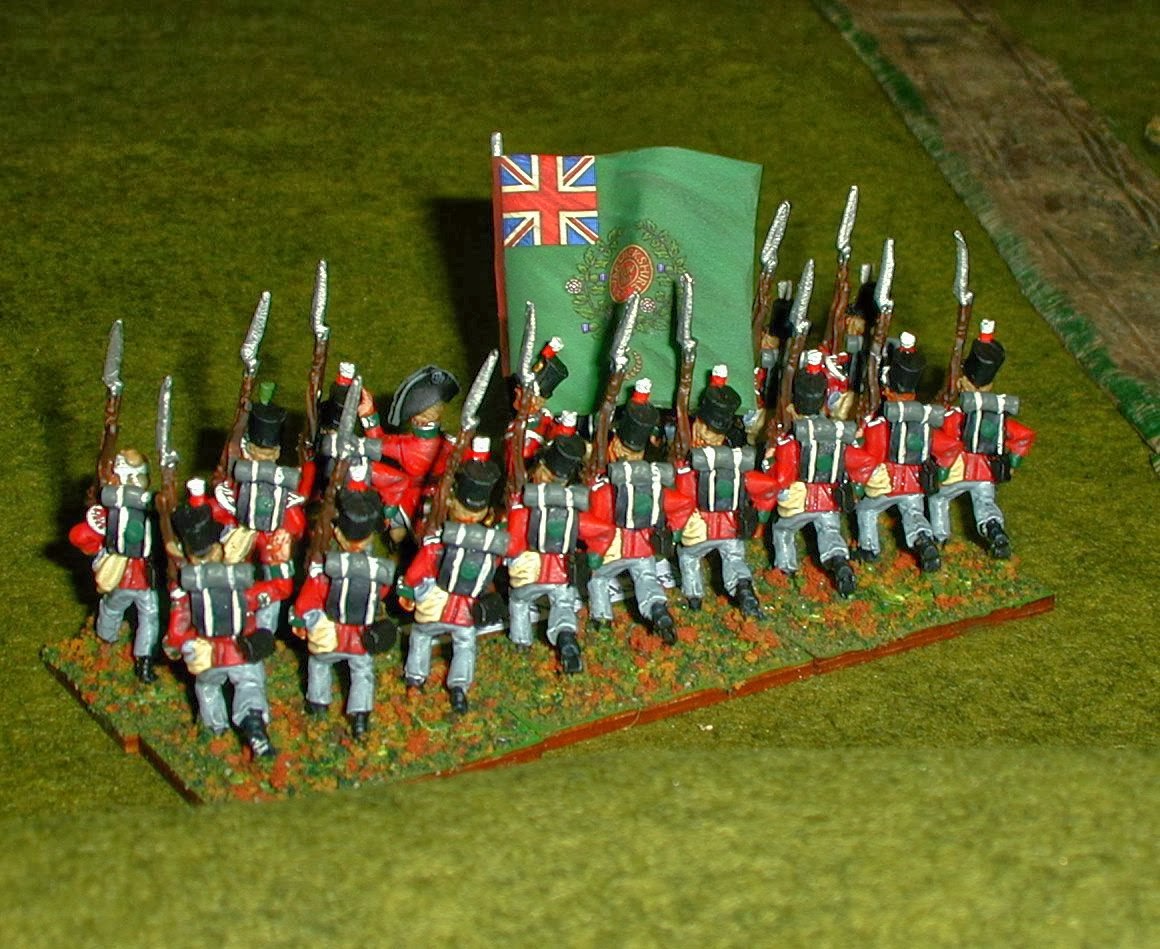 You can just make out the round patch painted onto the back packs in the facing color. This would usually have the regimental number or badge painted on it. Maybe some day! 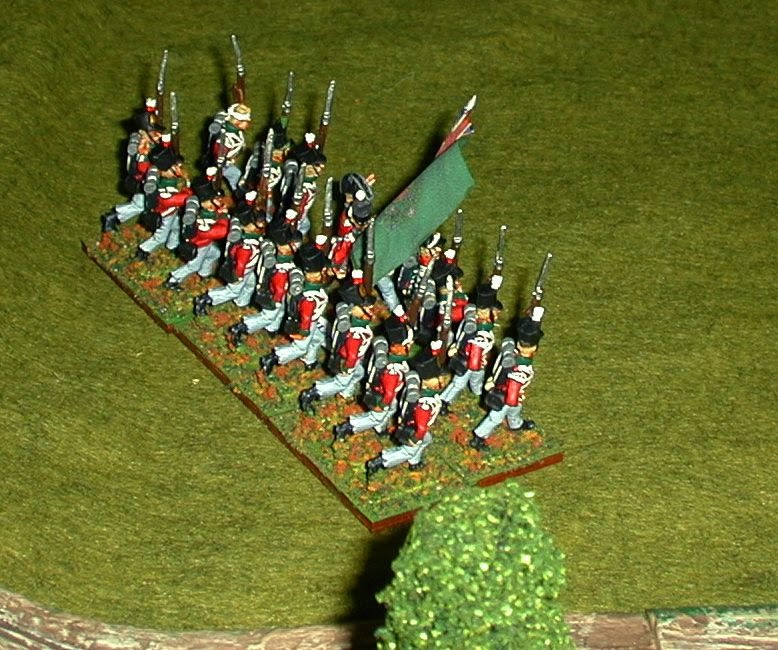 The outdoor pics shop the detail better, I think, but the facing color shows up better in these indoor shots. 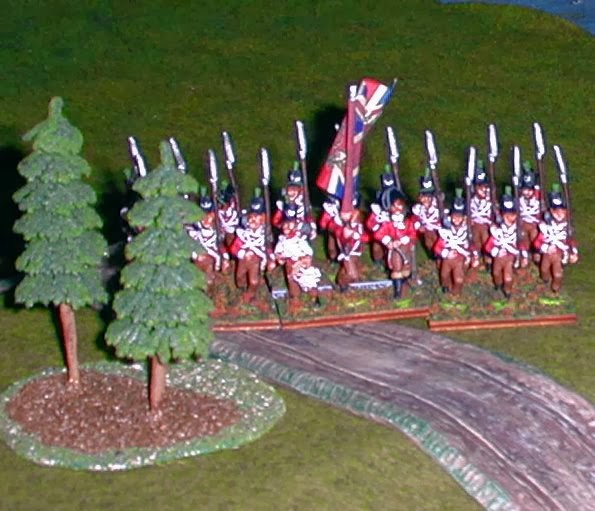 The second unit for today is the 43rd Regiment, or Monmouthshire Regiment. 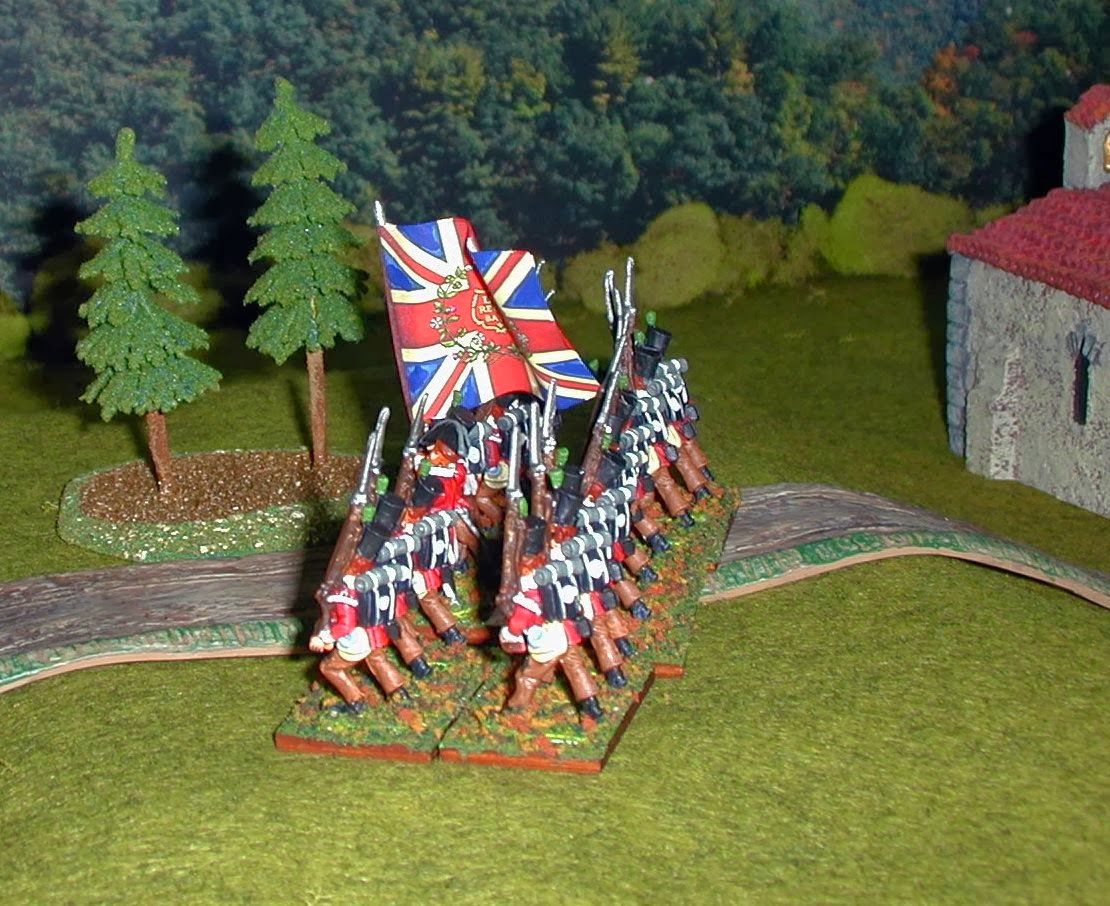 As one of the units trained as Light Infantry, all the companies have green plumes and red shoulder wings 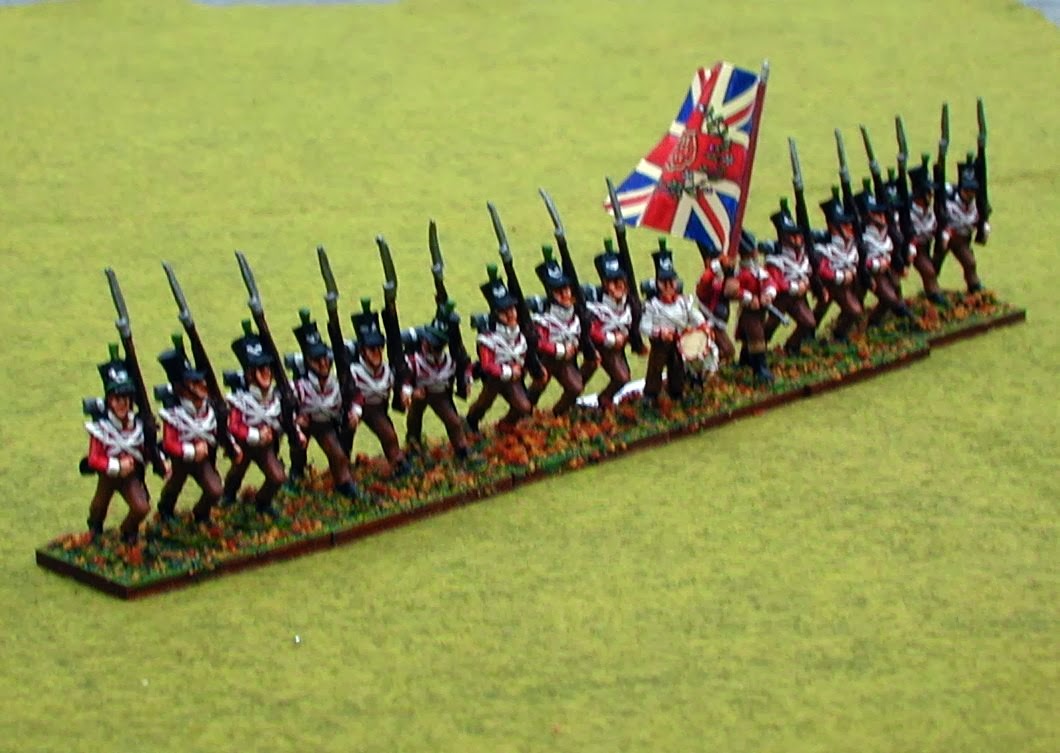 Many of the British (and French)troops in the Peninsula replaced their pants with ones made of local brown cloth; I have decided that all of my British Light Infantry units will therefore have them. This helps make them easier to identify on the tabletop. They also have silver hunting horns on the front of their shakos. 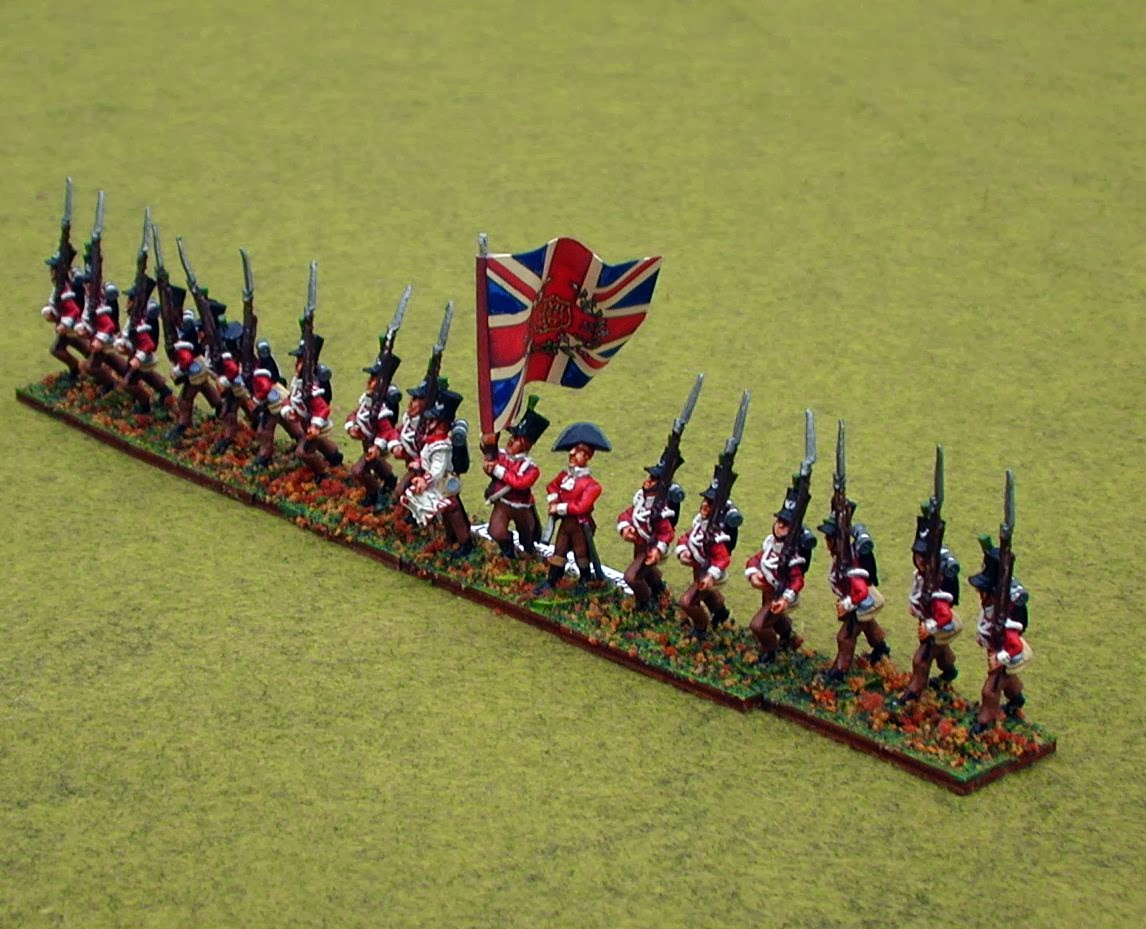 The 43rd had white facings, which show up nicely here. Their jackets had square lace in pairs. The officer's lace was silver for this unit. 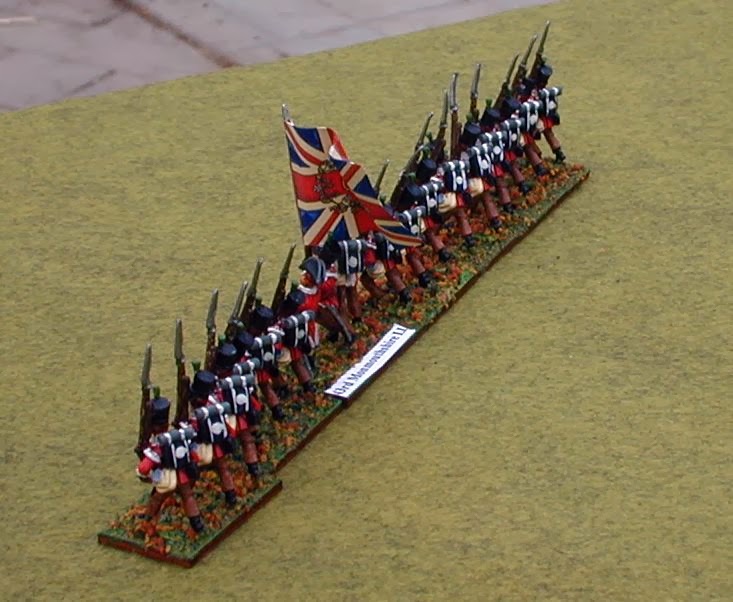 These are all Old Glory 25/28mm figures. I decided to go with my standard black "magic wash" instead of brown, and I think it worked just fine. 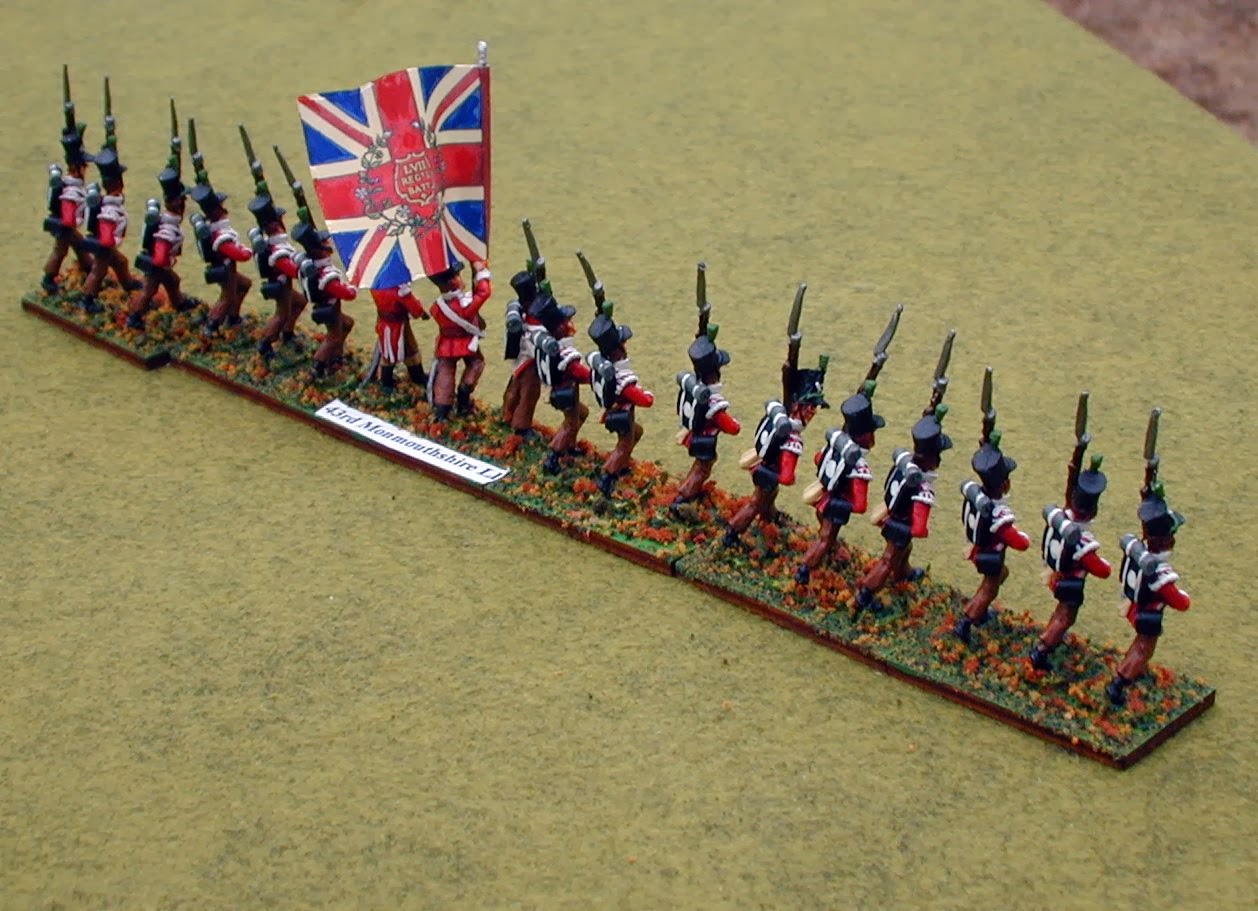 The flags are, of course, by GMB designs. More on that later*. By way of economizing and variety, I decided that my Light units would also be distinguished by carrying the King's Colors (union flag design), while the others would have the colored regimental flags.  Two flags for an 18 figure unit seems way too many for my tastes. GMB flag packs have one of each. I am not quite picky enough to insist the King's colors match the regiments, so a very careful look will reveal that they are carry that belonging rightfully to the 57th Regiment (which units will be in the next British Infantry post).


Colors used *(at least as much for my own reference as anything else): Enlisted men coats: Delta Ceramcoat (CC) Moroccan Red Opaque; shaded with Americana Deep Burgundy, highlight with CC Napthol Crimson
Officer's Coats:  CC Napthol Crimson, shaded with Deep Burgundy, highlighted with CC Poppy Orange semi-opaque.
Blue Grey pants - Wedgewood Blue opaque. I didn't stain these other than the wash - next time I think I will.
Warwickhire facings:  CC Hunter green - a dark green , tending to the blue side
Light Company plumes and cords CC Seminole Green Opaque.

* I bought a few GMB flag sheets from the Miniatures Service center a few years ago when they had a clearance sale (GMB has a bit of a sale now until Dec 31st if you need at least 11 flag sets). As it turned out these were the:

So you have a pretty good idea what some of the units to come in the future will be!

God Save the King!

Peter
Posted by Gonsalvo at 7:46 PM