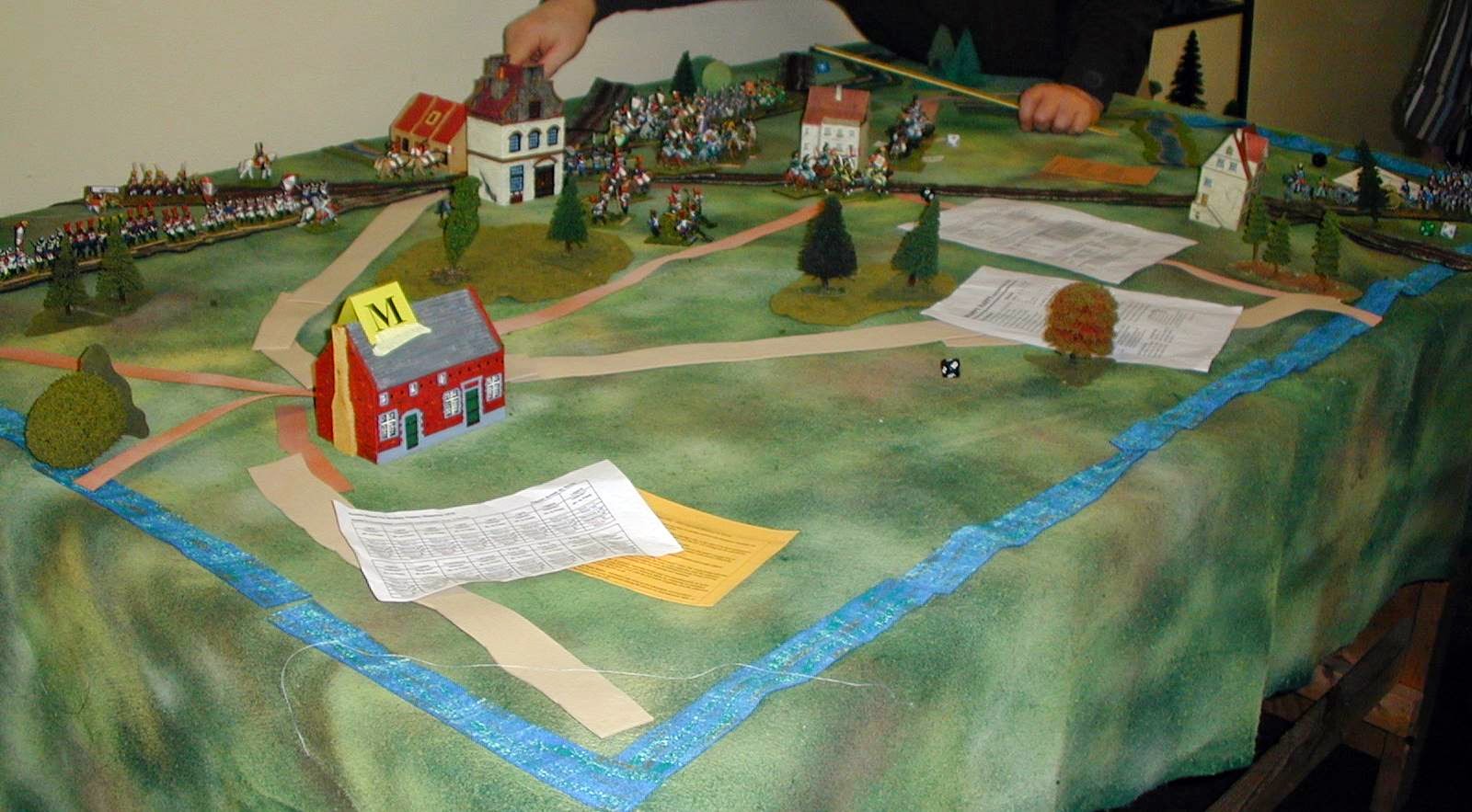 The French are swarming over the Mons table (the "hand of God" is touching Mons)... ultimately 3 Infantry Corps (D'Erlon, Reille, and Lobau), Cavalry Corps (Milhaud and Pajol), and the powerful Imperial Guard will all traverse this table. 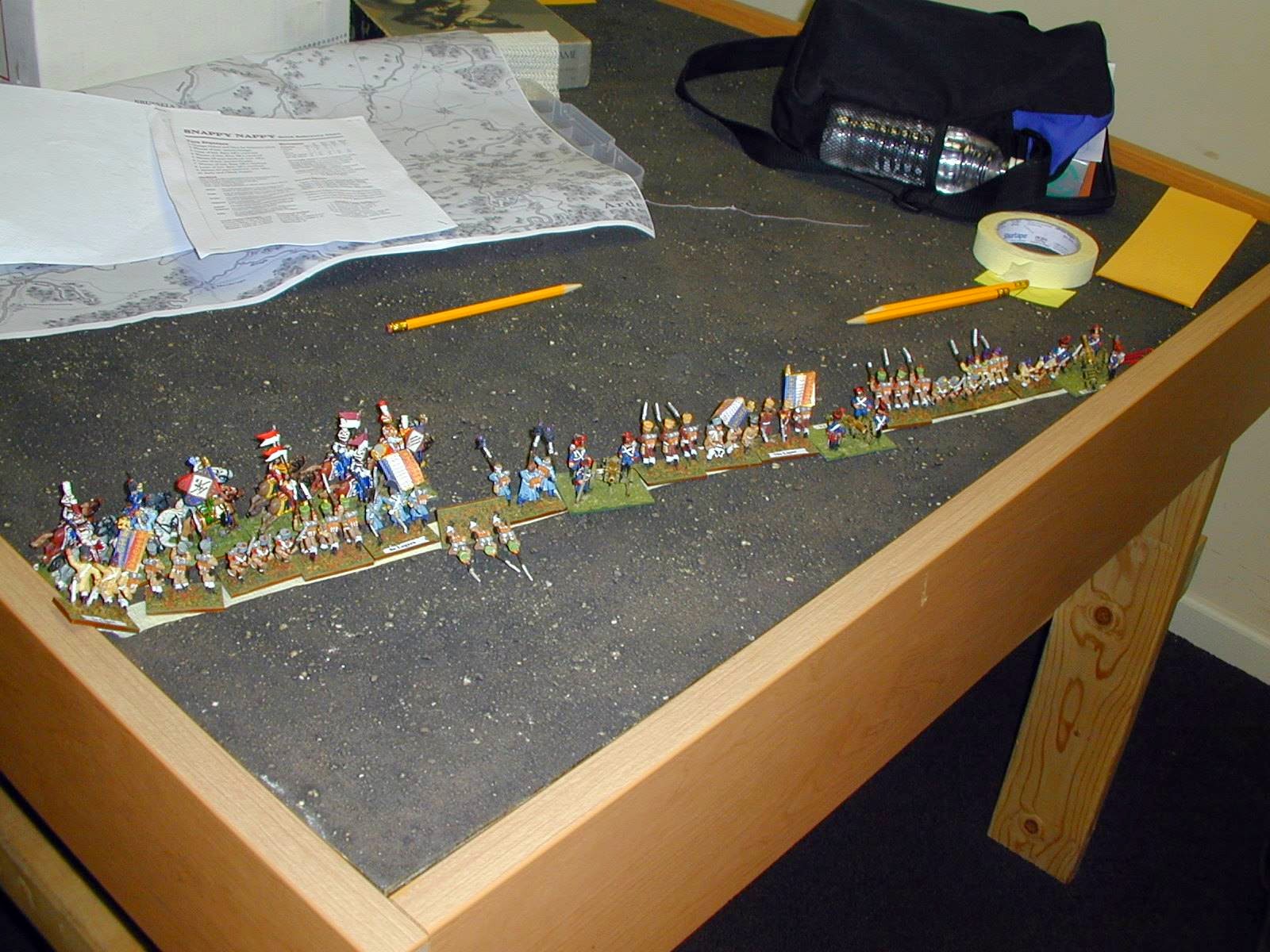 There was an un-modeled link from the Beaumont table diagonally to the Western edge of the Mons table. I planned to handle that by just keeping track of how far the head of the column moved, and when it was 24" along, it would appear at the next table. However, there was an unused table nearby, so a few spare road sections, and Viola!  The water bottle is reminder of the importance of staying hydrated at a 8 hour event! 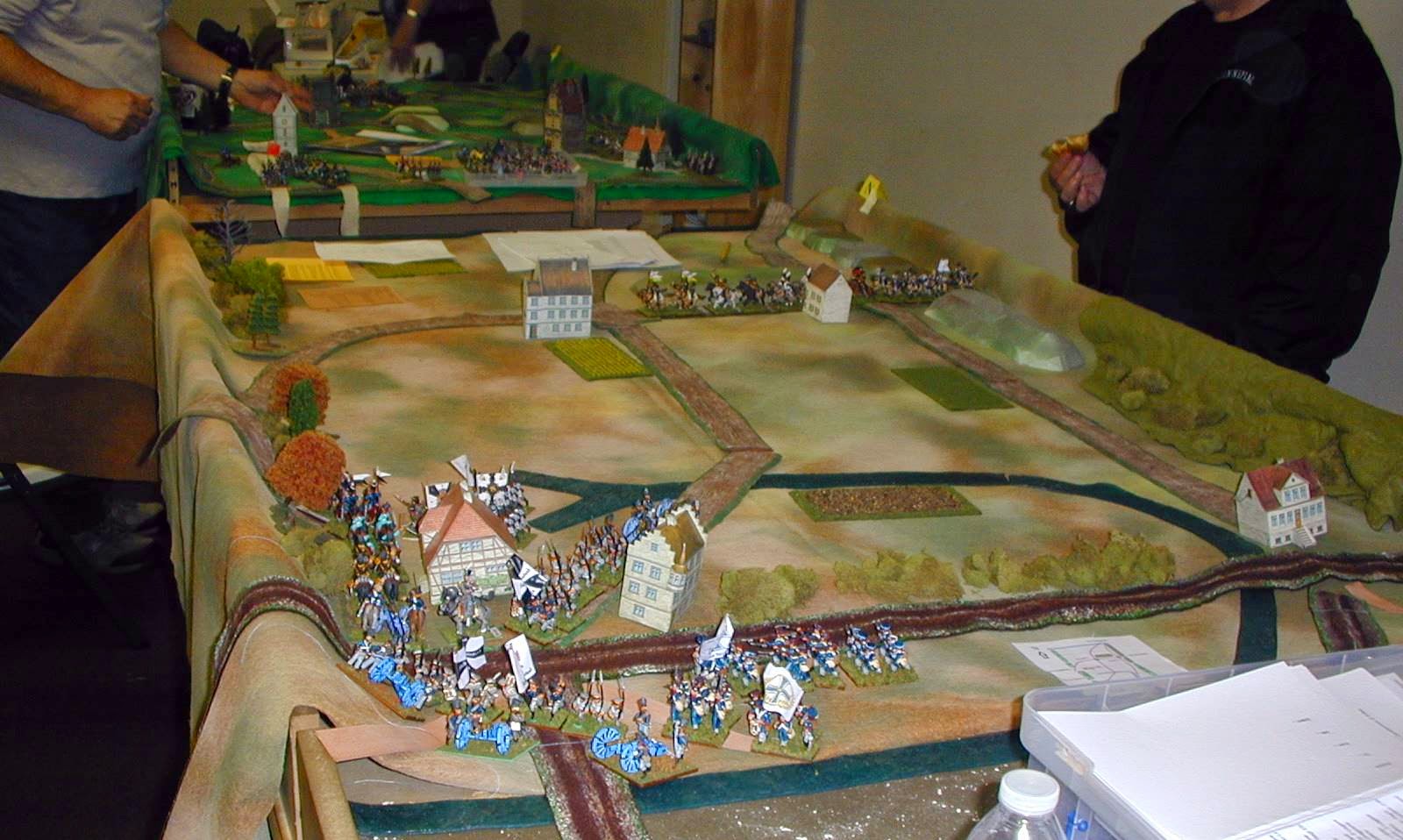 Pirch's Prussian Corps waits at Namur. In the distance, the vanguard of Von Bulows Corps is on the move, arriving on the table en route from Liege. 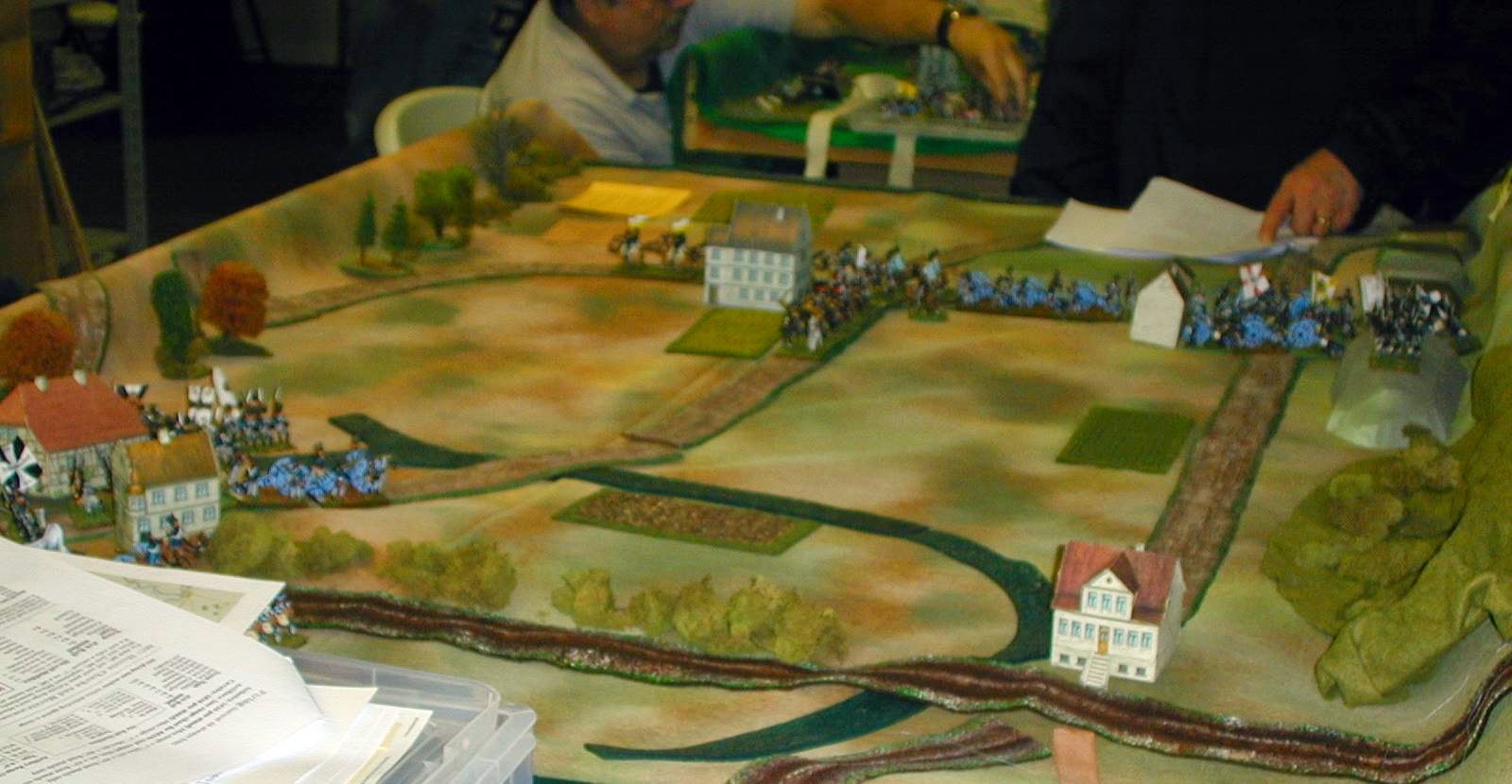 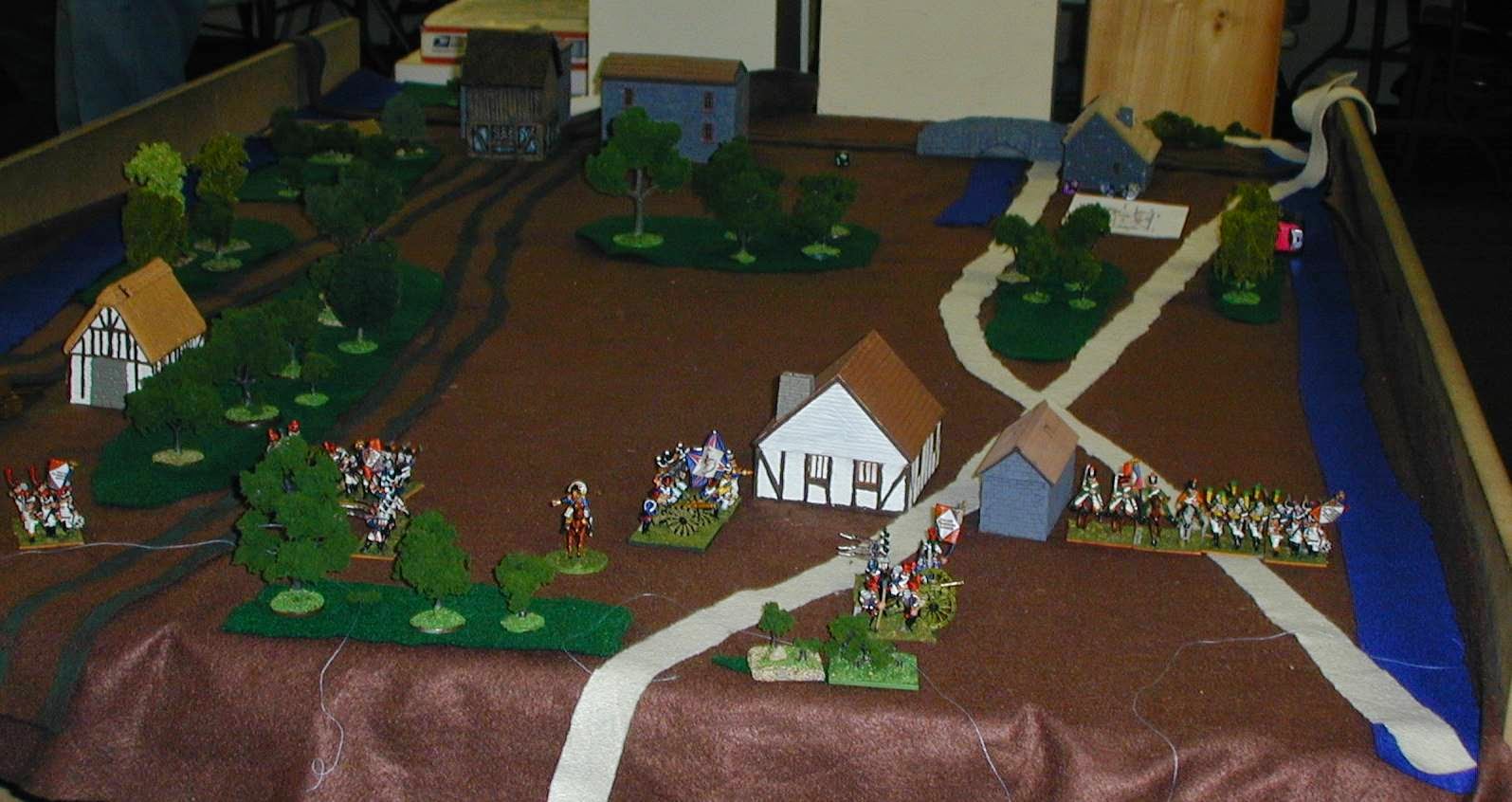 Vandamme's French Corps moves East on the Philippesville table,, occupying Fosse and Giver. I wonder where those Prussians went? 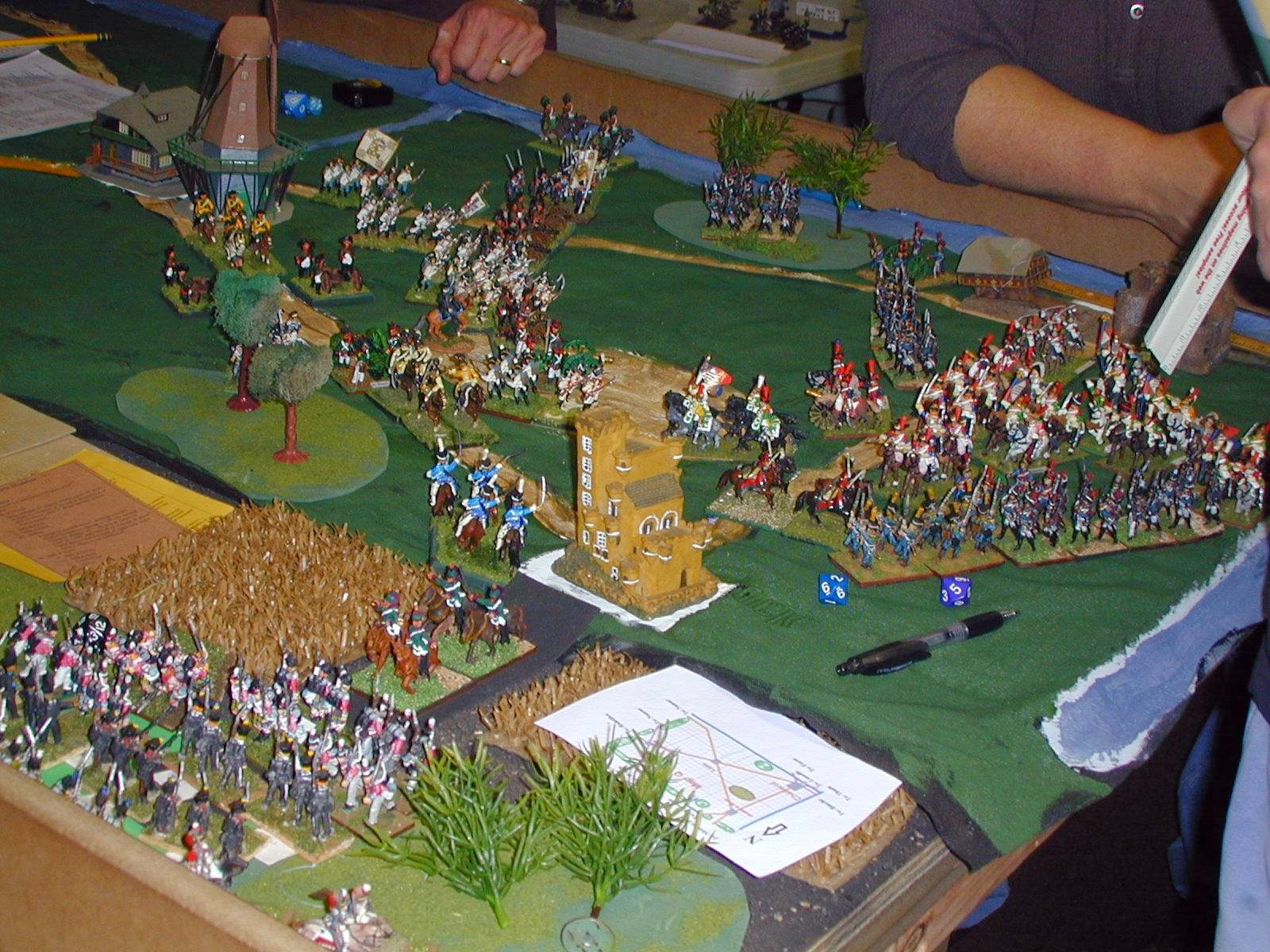 Picton's Corps arrives near Quatre Bras, with Wellington him,self accompanying them! Gerard is slowly grinding down Ziethen's Prussian Corps in front of Ligny.. 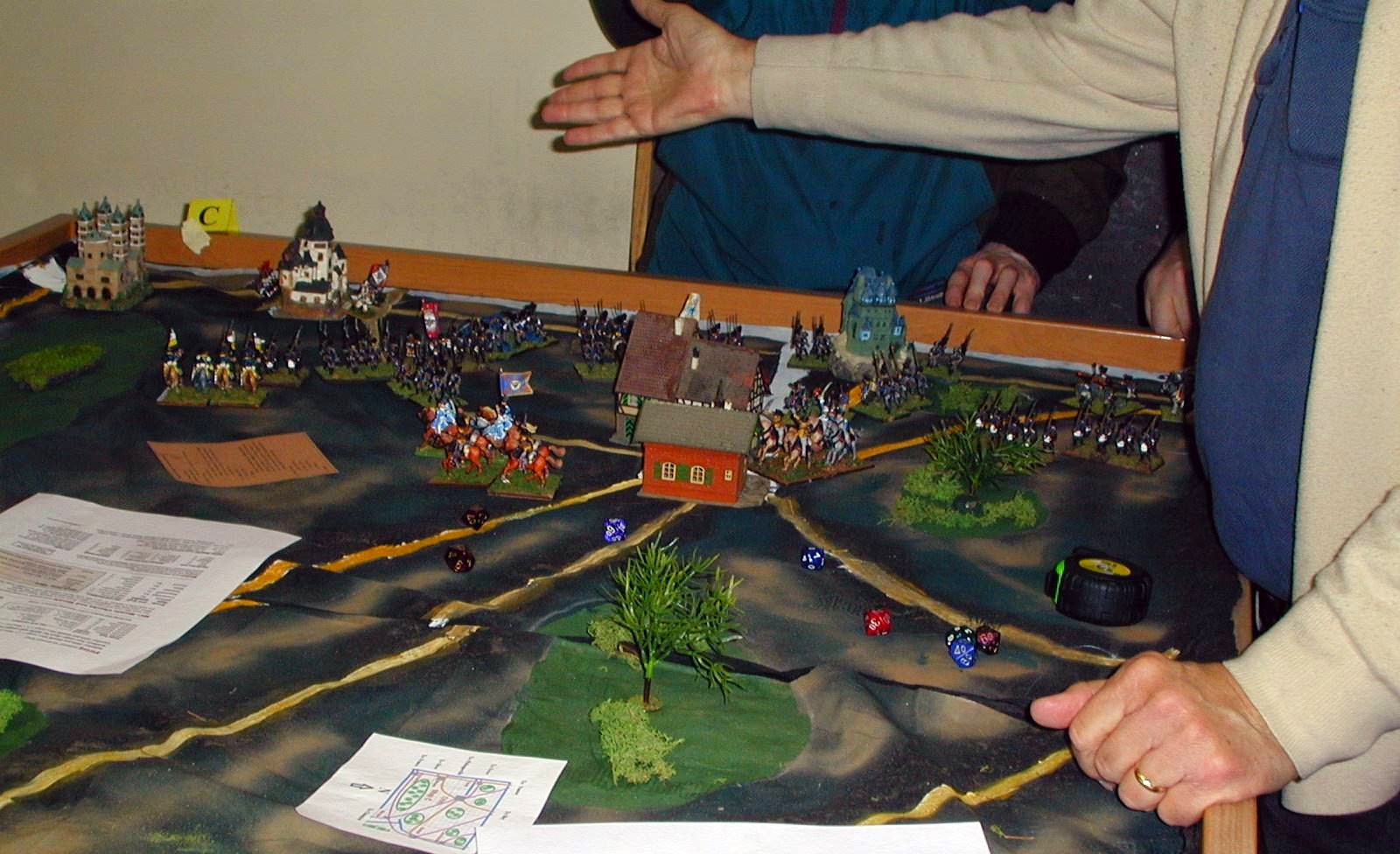 The lead elements of Theilmann's Corps have returned to the Ciney table. Presumably Blucher has told them the time is not yet ripe for them to attack! 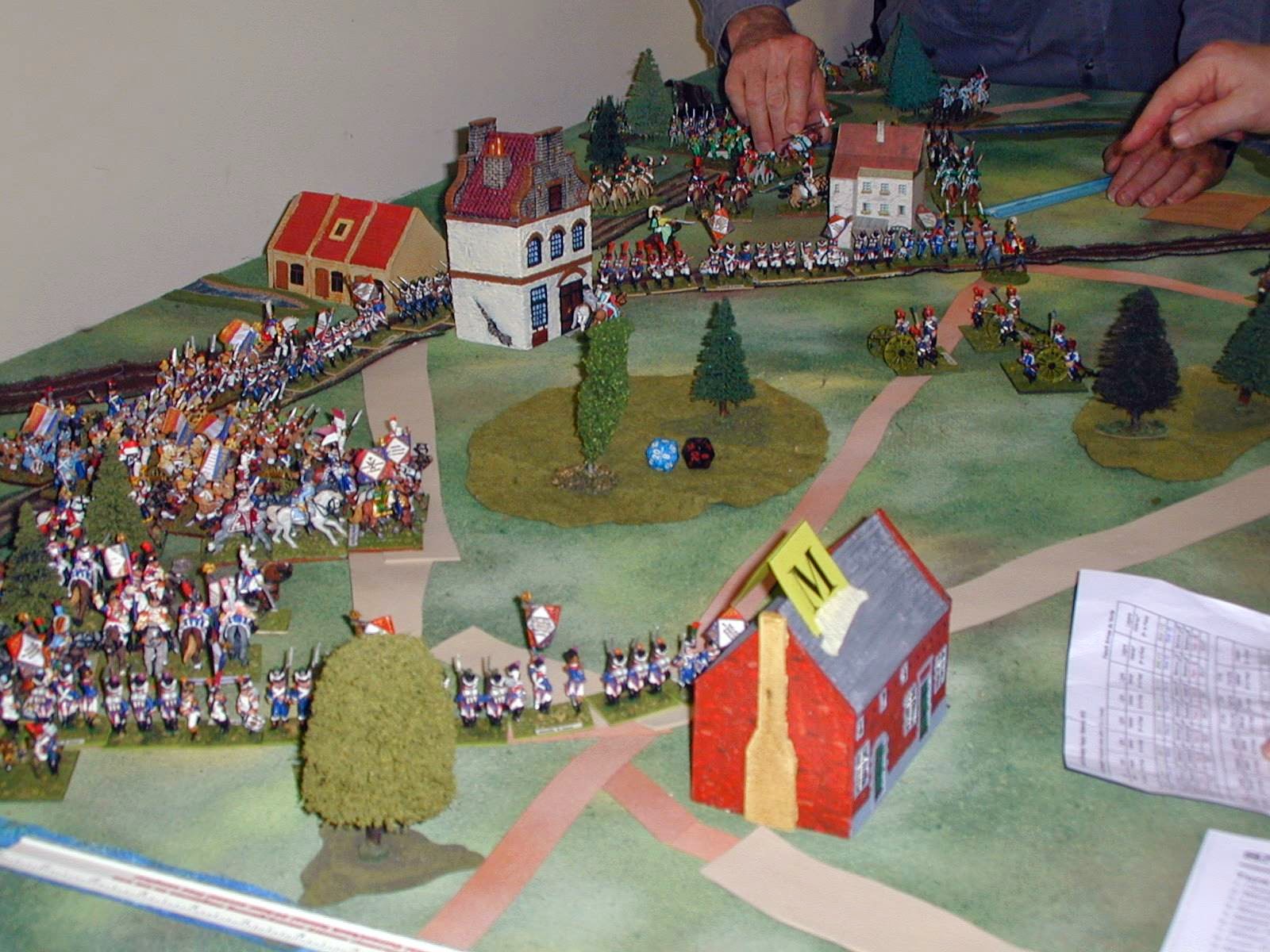 The French continue to pour through Mons and vicinity, while the scant Anglo-Allied troops occupy the Northern part of the table.. heavily outnumbered. 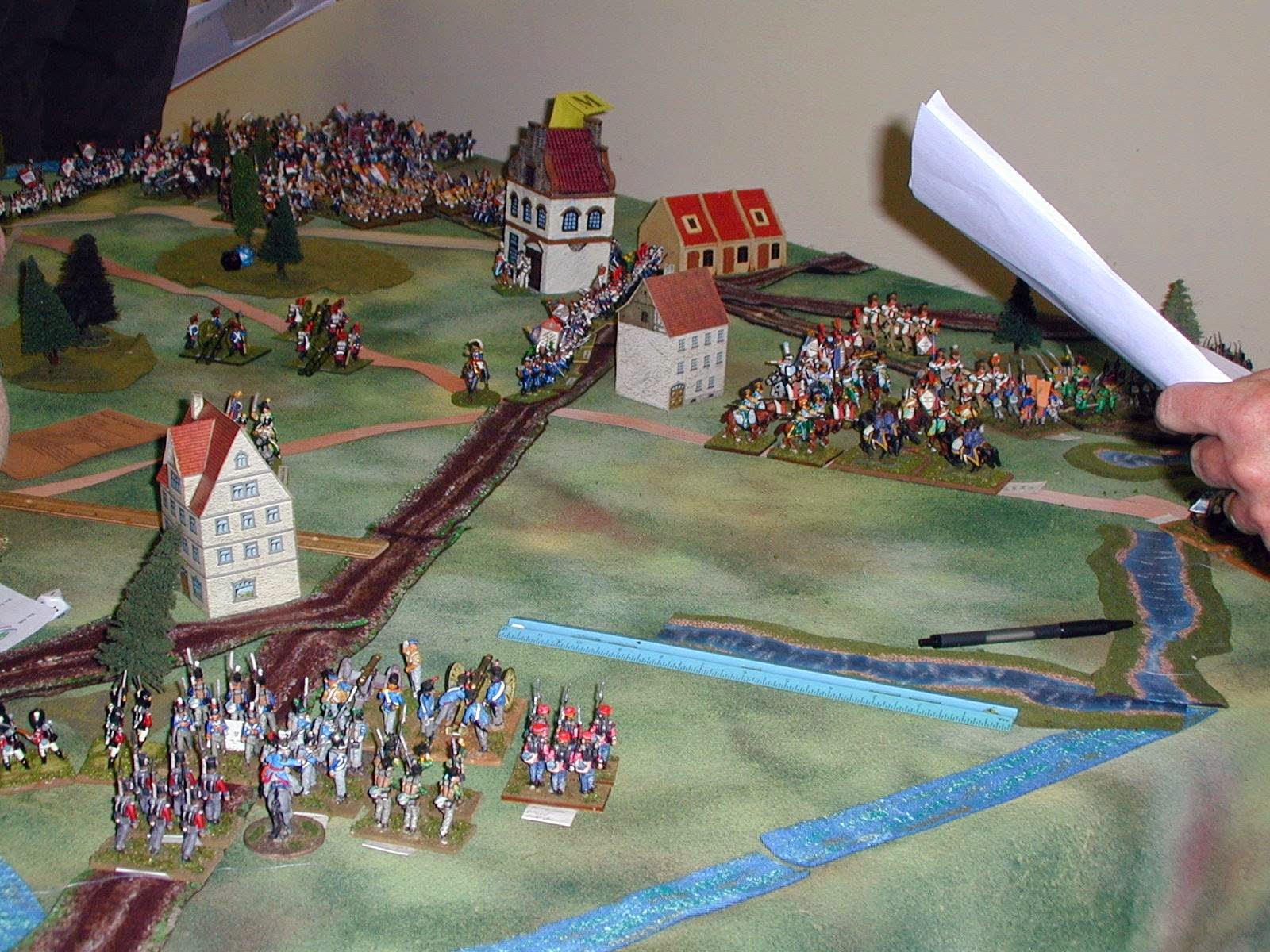 The Mons table from the  Anglo-Allied perspective. 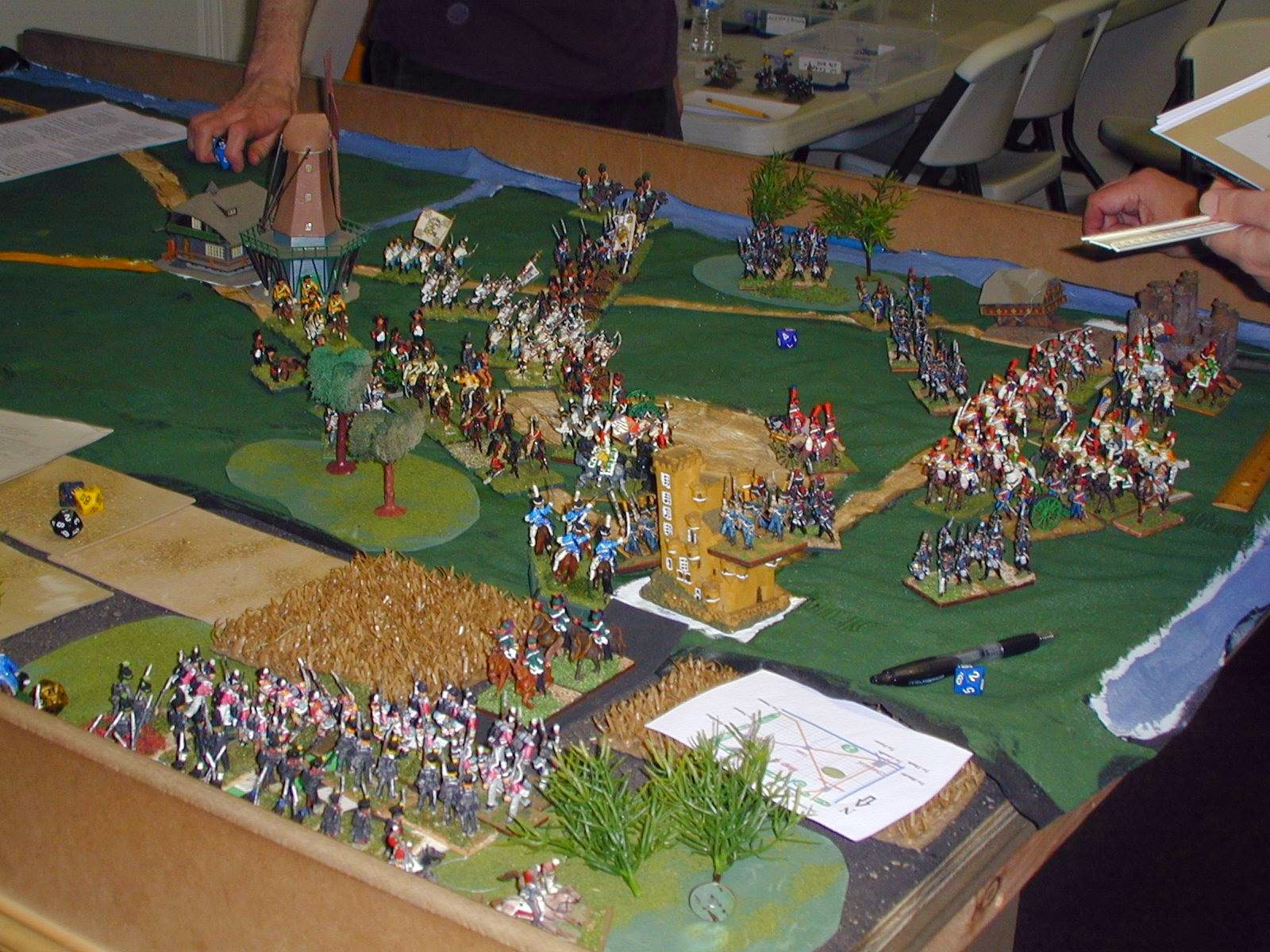 Heavy combat continues between Gerard and Ziethen. The British, having arrived, don't seem disposed to mix it in. It seems Wellington is looking for Blucher, but he has ridden of to Namur! 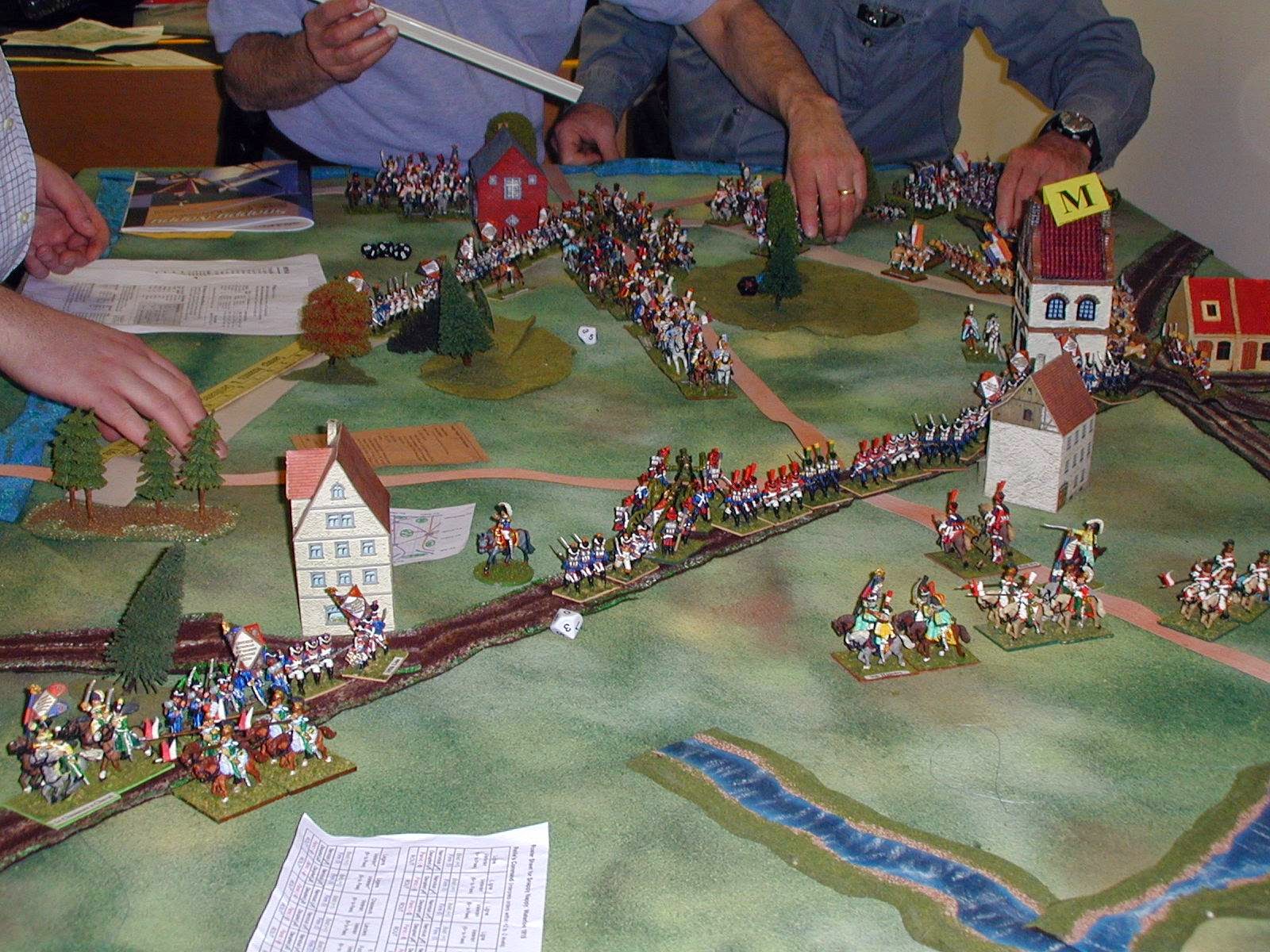 The Anglo-Allied troops have beaten a hasty retreat, conceding Mons to the French. This will place their communication with the Channel ports in grave danger! 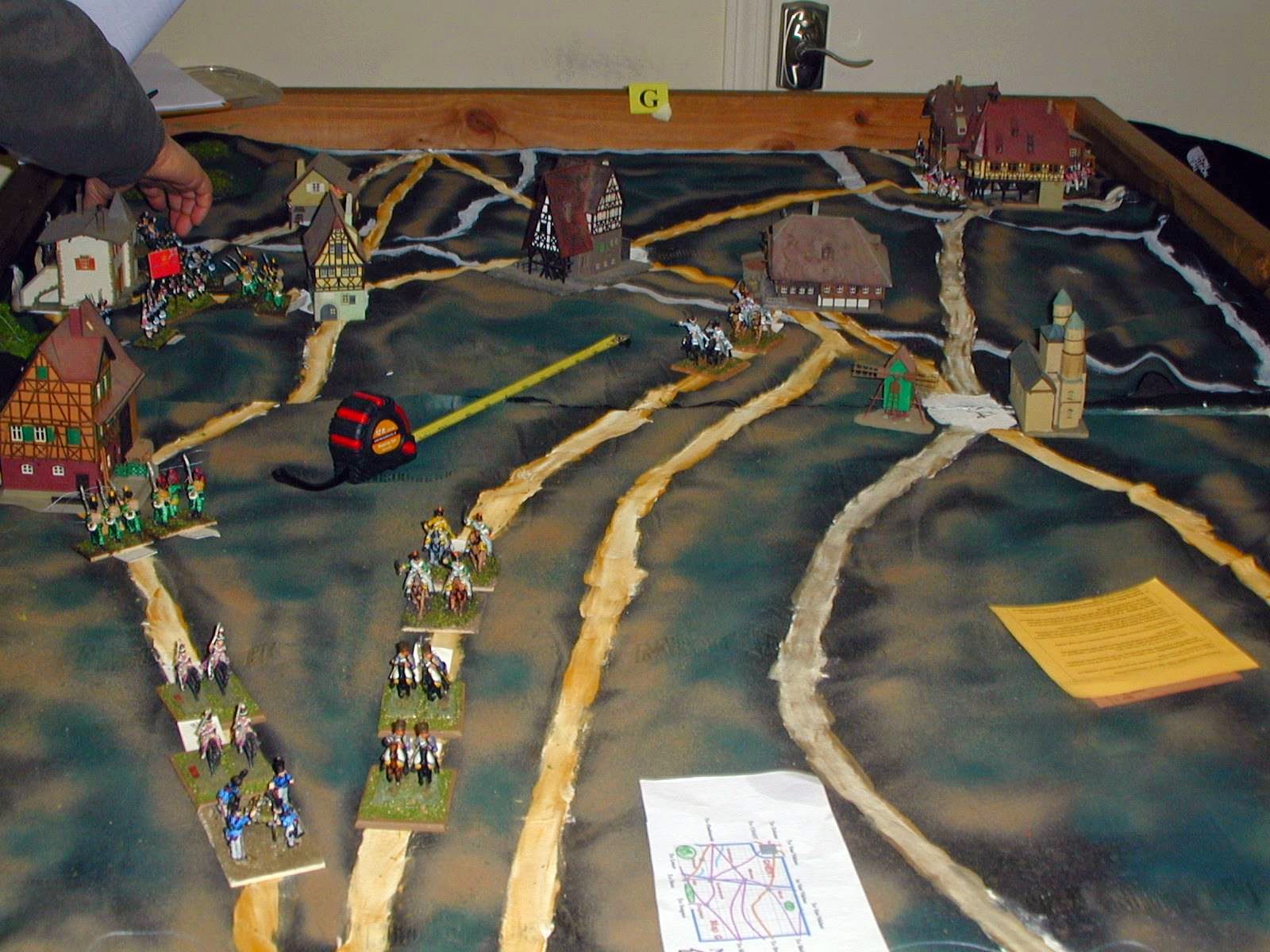 Some of them have retreated to Table "G" - Ghent is in the upper right corner. Ath and Engien are garrisoned to defend against French invaders from the South on the Mons table. 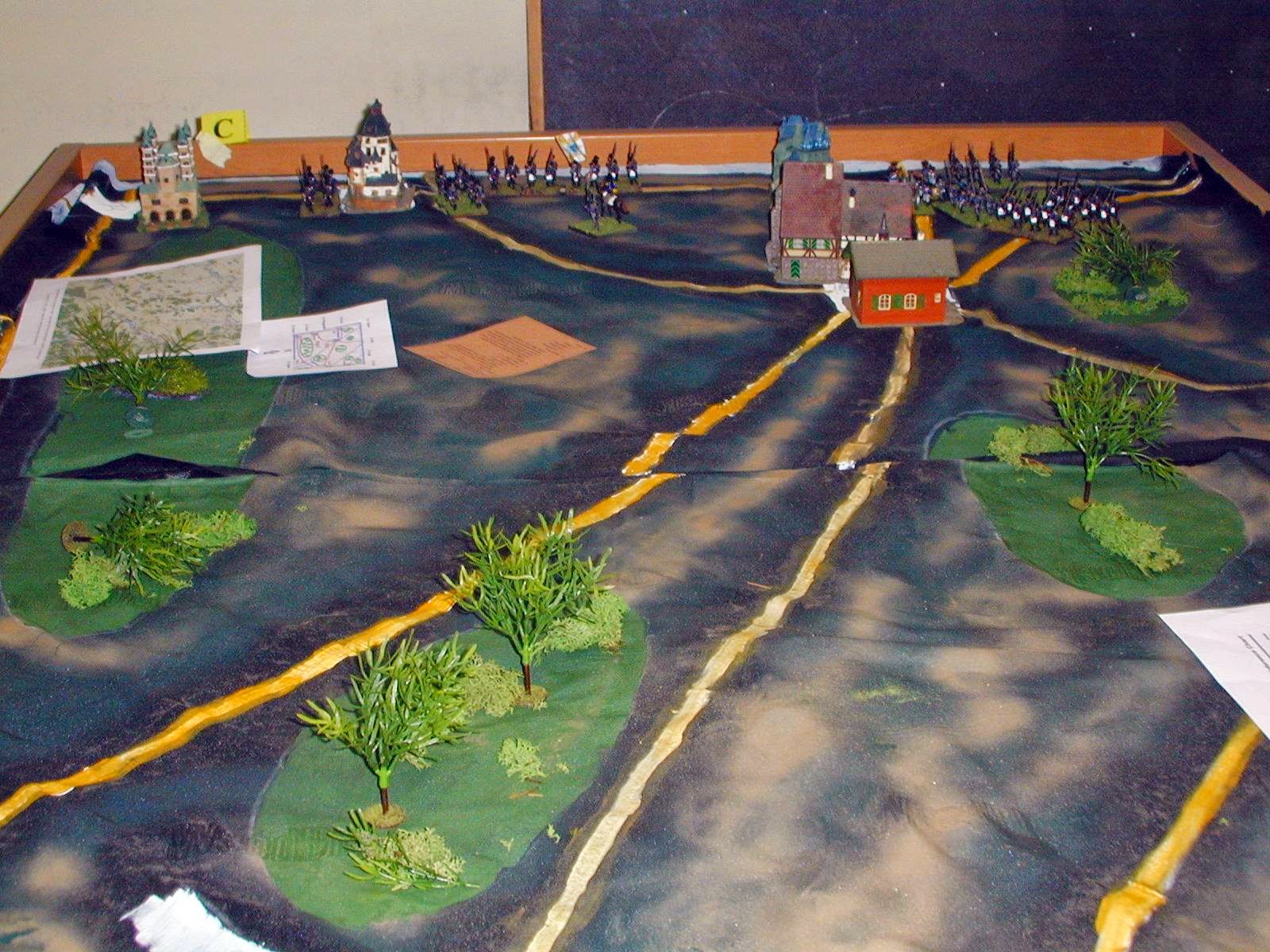 Thielmann's Prussians have finally deployed. They defended against a brief French probe across the river by Vandamme, and have mopped up the small forces French forces that were deposited in the villages of  Dinnat and Yvoir. They are ready to defend against another French thrust from the Phillepesville table... or to try their luck with an attack themselves! 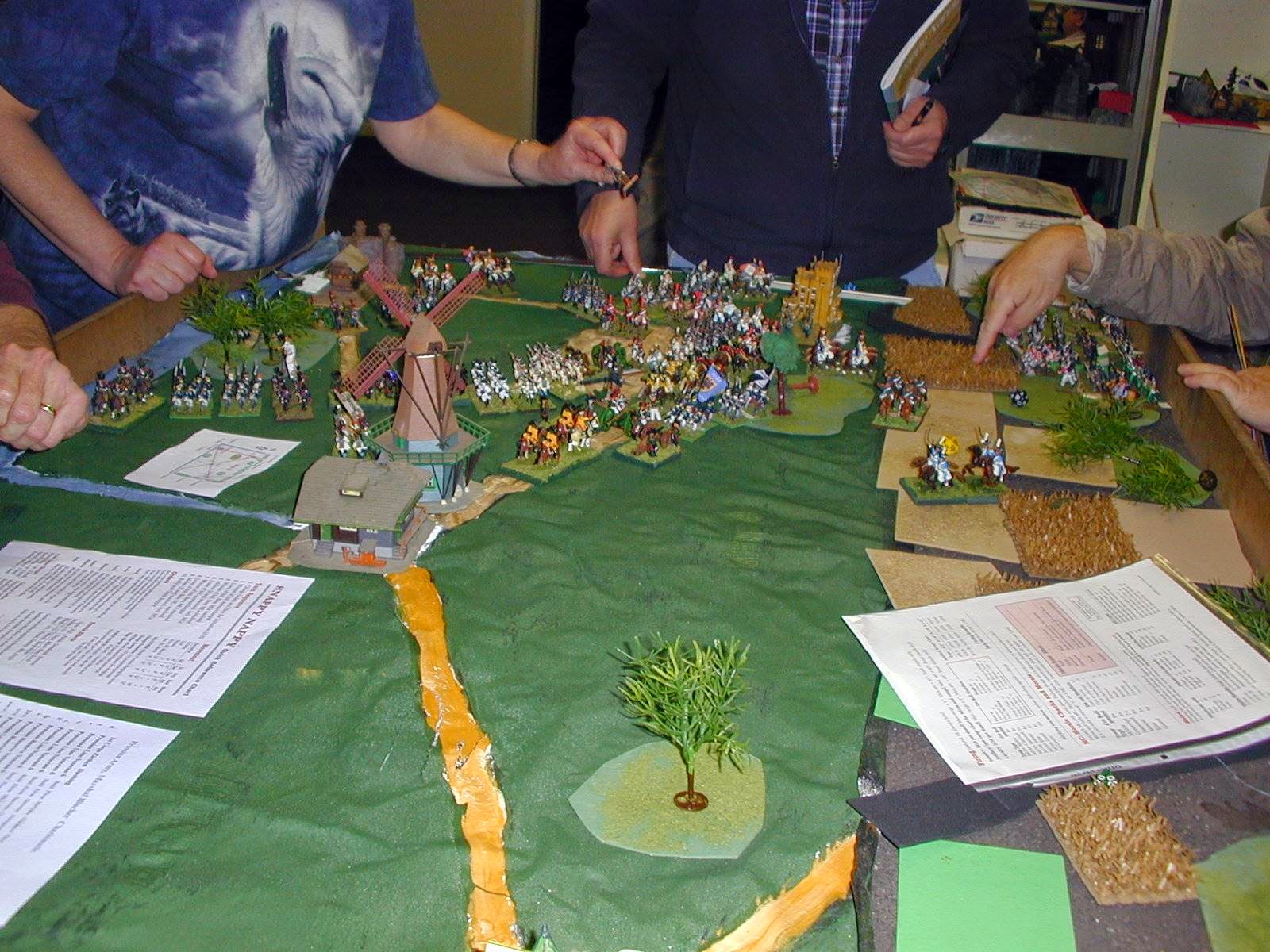 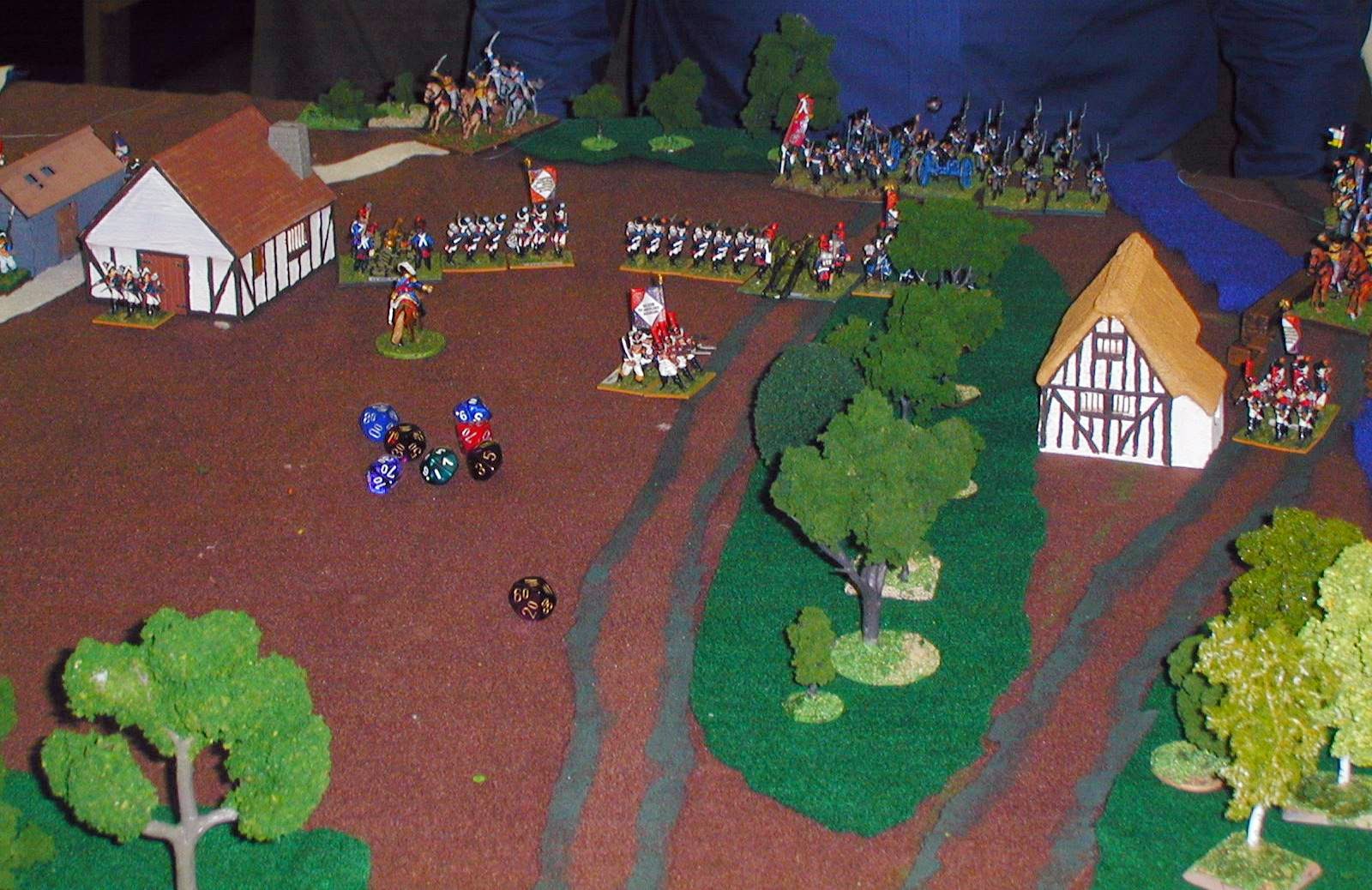 "Vorwarts!  Angriff!" Blucher finally releases Thielmann, and his large Corps (played by a father-son team) moves back onto the Philippesville table. 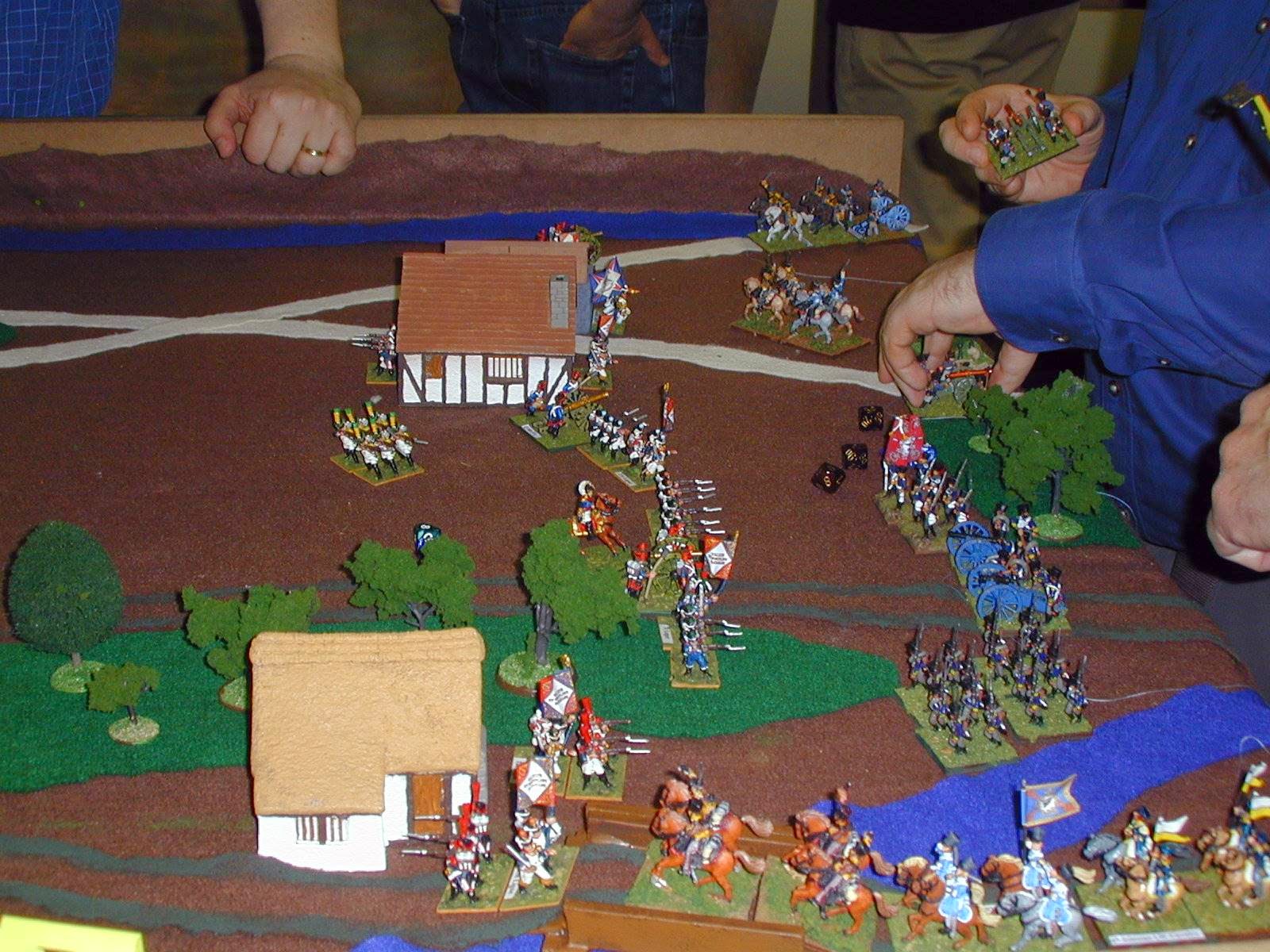 Vandamme's French troops have a good defensive line linking Fosse and Giver... but almost no reserves! They are outnumbered about 3:2, although some Prussian units are of substandard quality. The Emperor's messengers indicate that His Majesty expects the Compte to crush them! 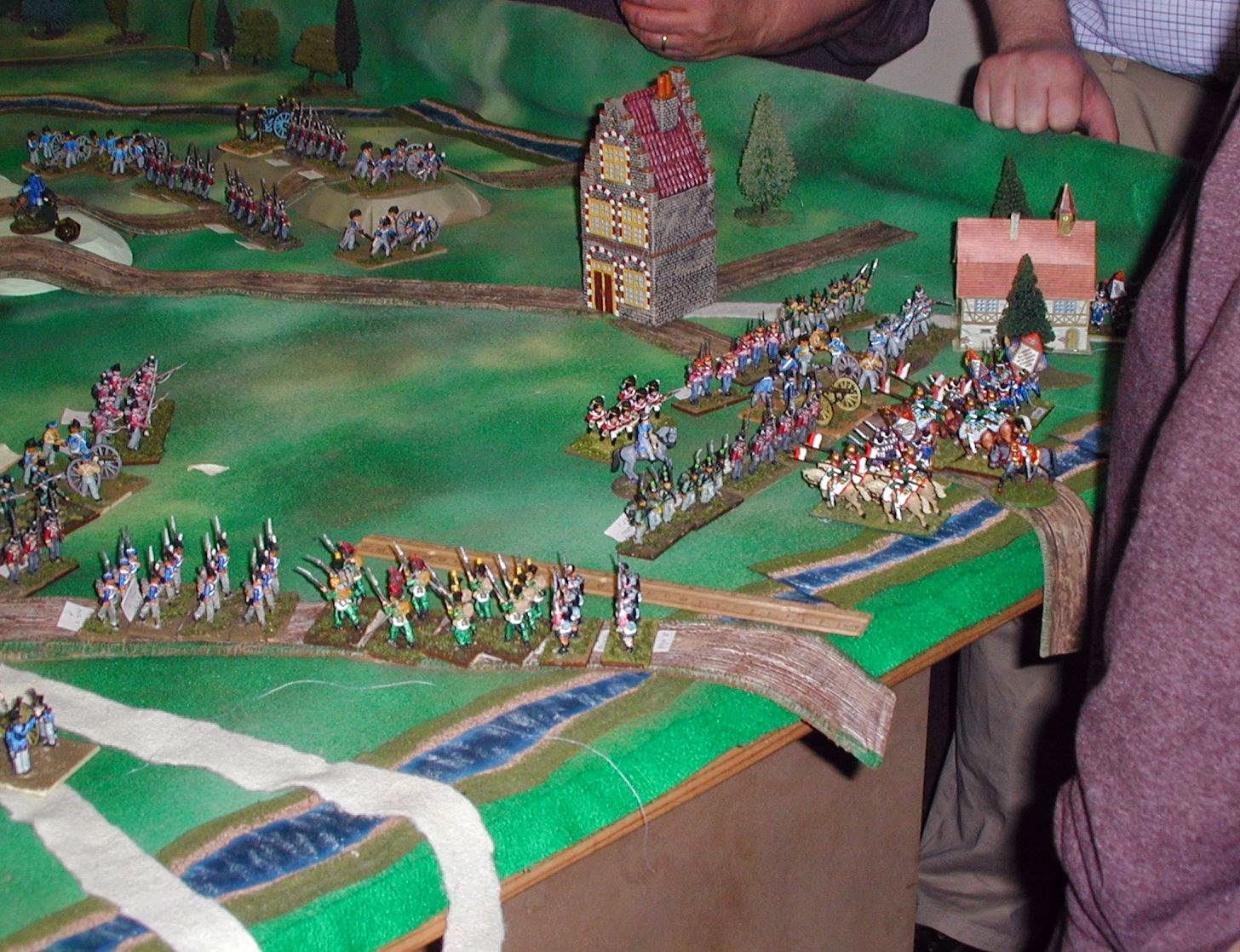 Some of the Anglo Allied Troops withdrawing from the Mons area have moved onto the Waterloo table - the villages of Seneffe and Nivelles are seen in the right foreground... as are  some French pursuers! 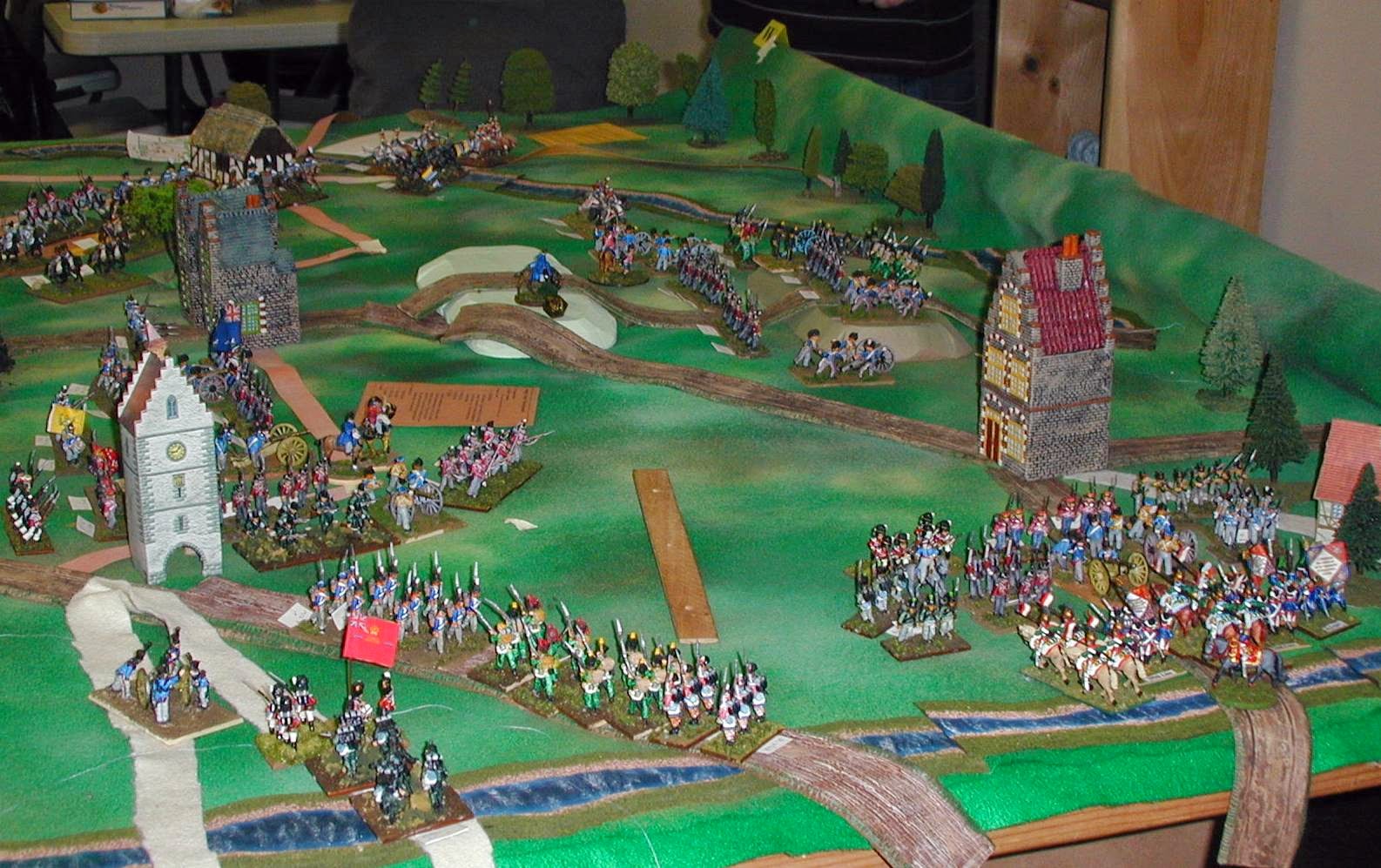 The British seem to have massed almost their entire strength on the Waterloo table... and an impressive sight it is! 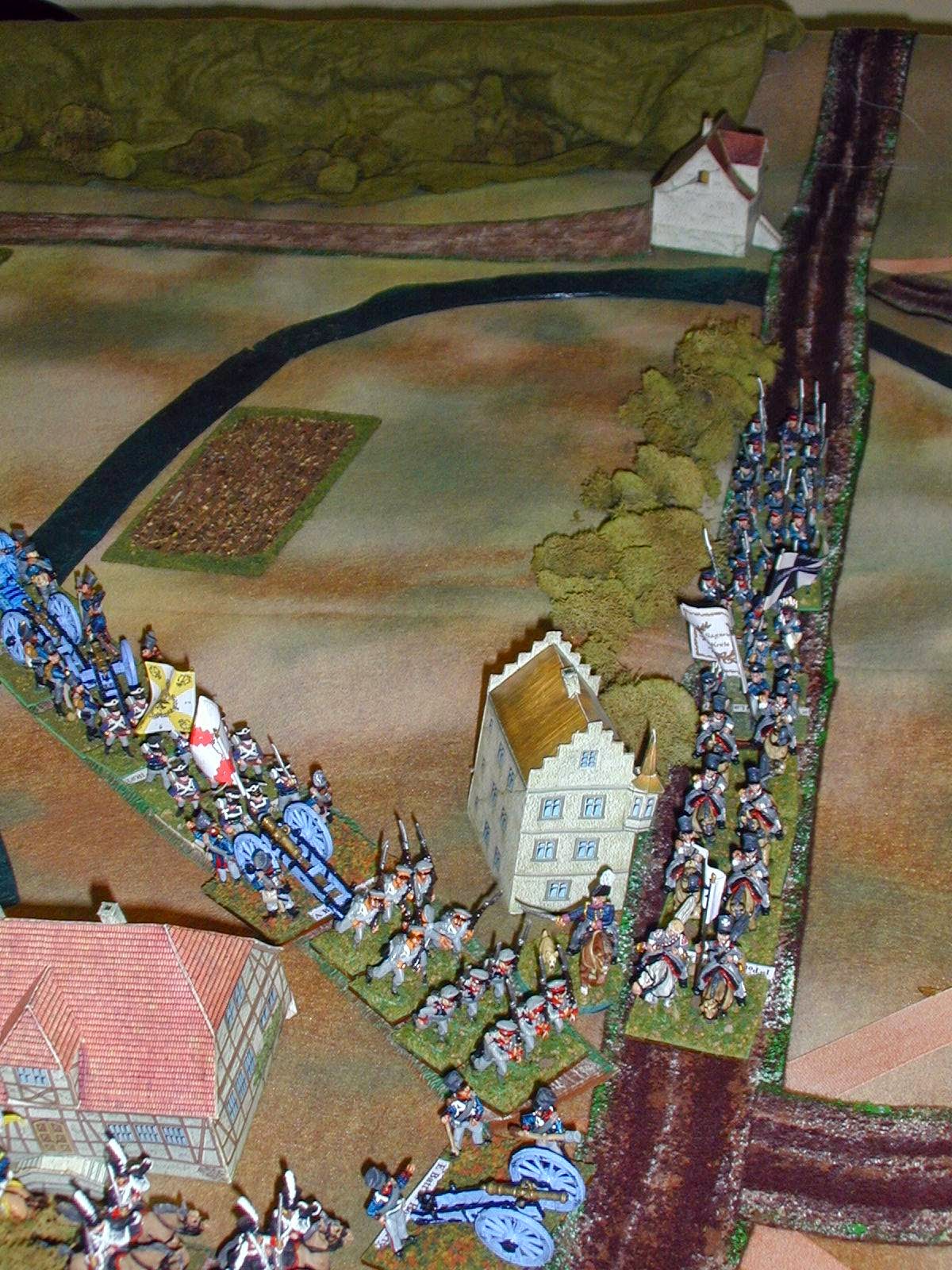 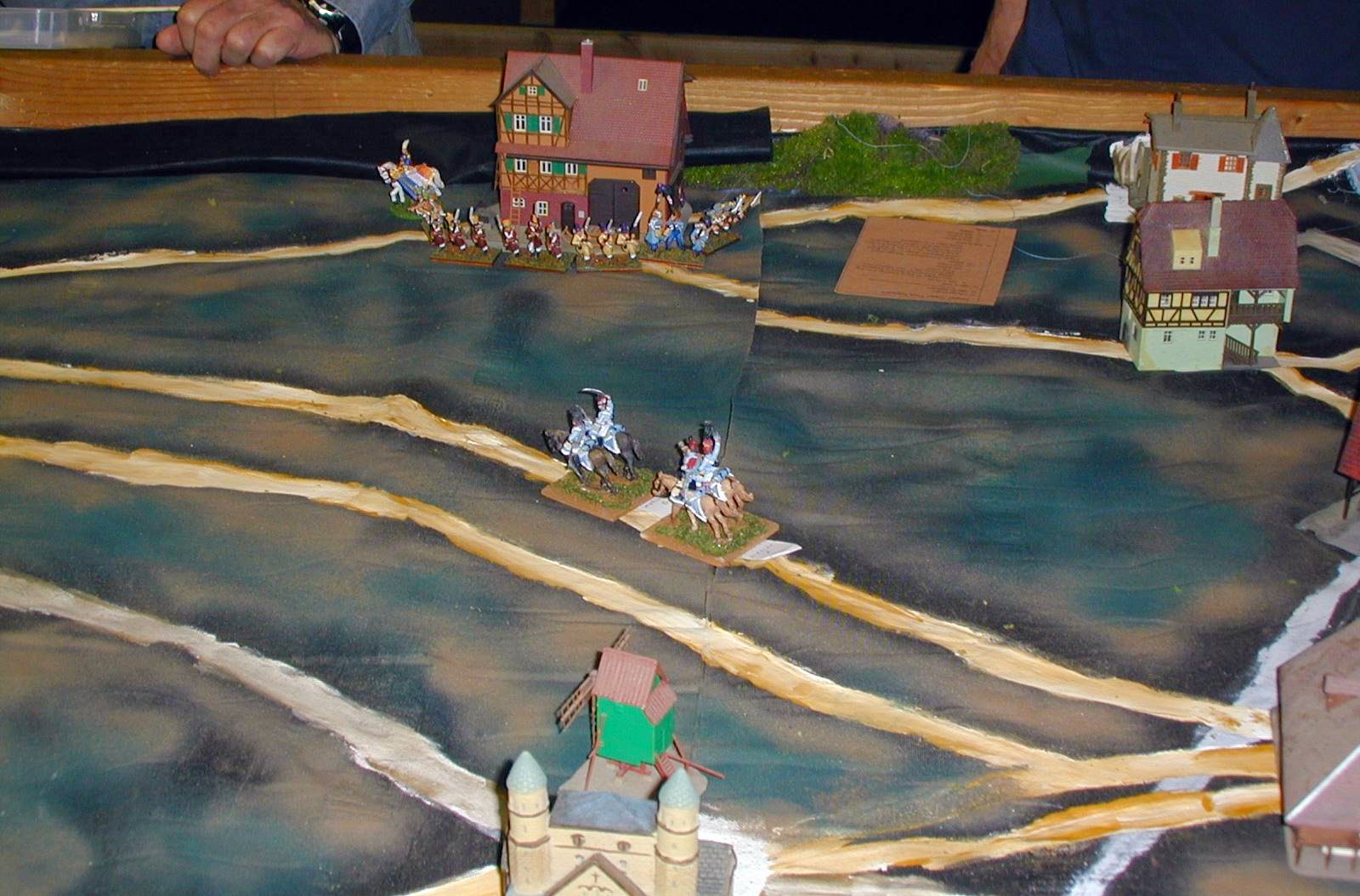 Only  few Anglo-Allied troops remain on the Ghent table.  What's that? Enghien has fallen to the French! Damn your eyes, Sir! No good can come of this. 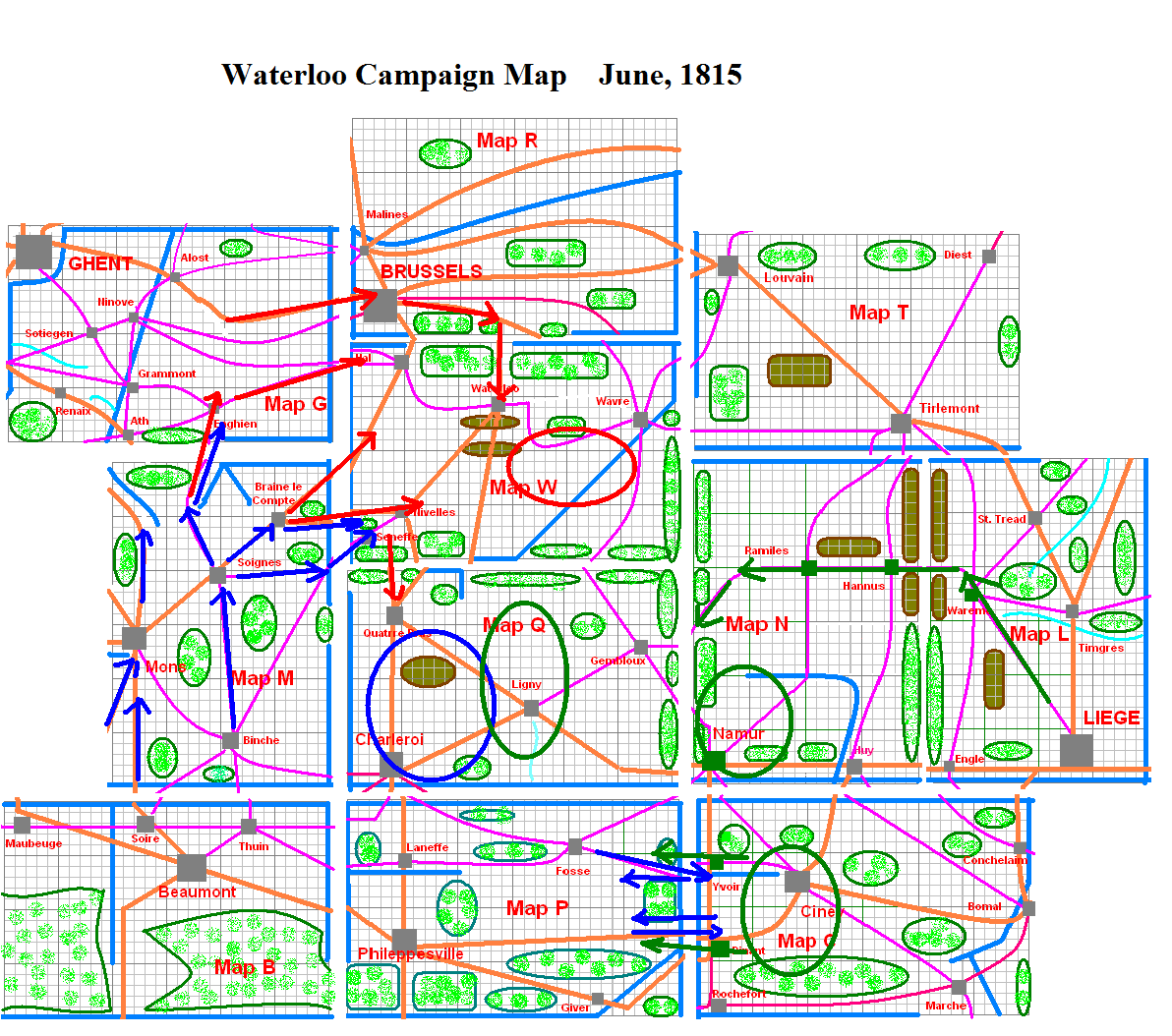