Time for a brief break for the Prussian units I'm churning out for Ligny this July! One of the more unusual units in the French army was the Marins de la Garde. While we English speakers have a tendency to anglicize their title to "Marines of the Guard", as most readers probably know, "marins" in French really means "sailors", so these troops are more properly referred to as the Sailors of the Guard. Their history dates back to the Consulate. The original battalion was raised in September, 1803. It consisted of 5 equipages, each composed of composed of 125 matelots (another French word for sailors), 1 trumpeter, 15 craftsmen and NCOs, 5 ensigns and was commanded by a Naval Lieutenant. The entire battalion was commanded by a Naval Captain (capitaine de vaisseau). 120 men from the unit were part of Napoleon's escort at his coronation in December, 1804.

The Sailors proved very flexible. In Napoleon's own words, as quoted in the Osprey on the Infantry of the Imperial Guard  by Haythornwaite, "What should we have done without them? As sailors they have no way deteriorated, and they have shown themselves the best of soldiers. When occasion required they proved equally valuable, whether as sailors, soldiers, artillerymen or engineers; there was no duty they could not undertake." 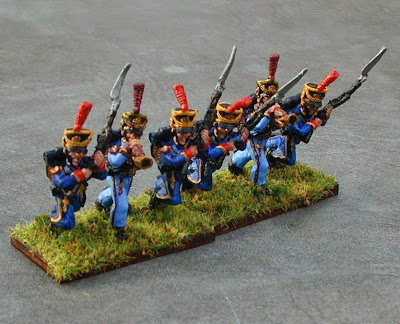 From the very beginning, the uniforms of this unit were unique, and owed much more to light cavalry styles than Naval ones! The dark blue jacket was termed a paletot - essentially similar to the dolman of a hussar. The braid on the jacket (which was often left partially open on the bottom to show the braided red waistcoat underneath it) and elsewhere was aurore, except for under officers where it was scarlet mixed with aurore (Gold mixed with scarlet or just gold for higher officers, whose uniform was much simpler and more conventional, following Naval styles). 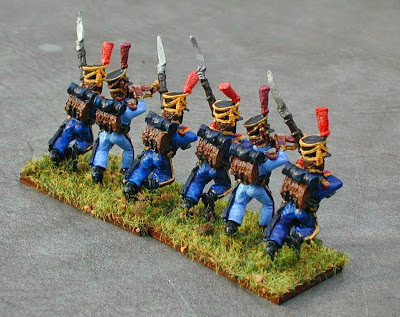 Once again in common with the Cavalry of the Guard, the unit had trumpeters! Along with the unit's drummers, they wore light blue uniforms with Crimson (officially) or Scarlet (as seen in contemporary illustrations) cuffs, plumes, and crimson mixed with gold (2:1) lace. 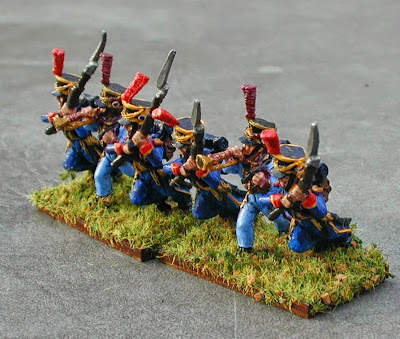 I used Delta CC Pthalo Blue for the clothes of the Matelots, and CC Blue Jay stained CC Blue Lagoon for the trumpeters.The Plumes and cuffs were done using CC Napthol Crimson, the former dry brushed CC Pumpkin Orange. I used CC Calypso Orange for all of the aurore items, For the trumpeters, the cuffs and plumes were painted with Americana Deep Bugundy, and their plumes dry brushed CC Dusty Mauve. 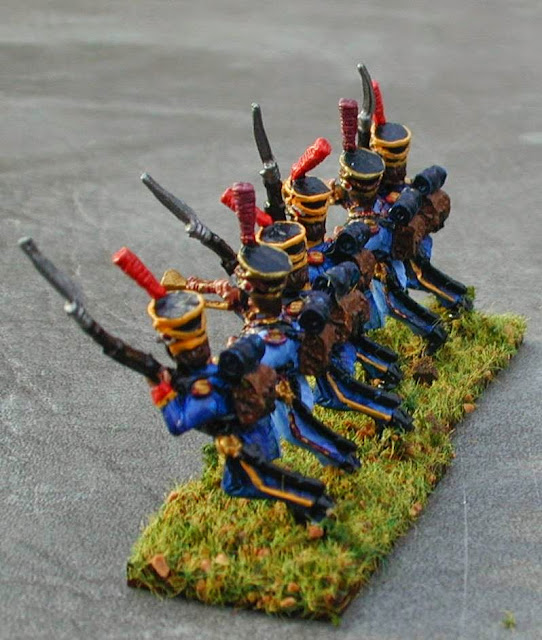 Yet another unusual feature of this unit's uniforms was that all of the leather work was BLACK; I can't think of any other French Napoleonic unit where that was true!  Note also the unusual placement of the cockade at the left side of the shako.  These are Old Glory 28mm figures. I al;ready used 24 out of the 30 figures in the bag to do my 1809 Young Guard units, so these came from the "parts box"; as the Marins were unique in having Trumpeters, they couldn't be used for the Tirailleur-Grenadiers, etc, hence their gross over representation in my small unit! 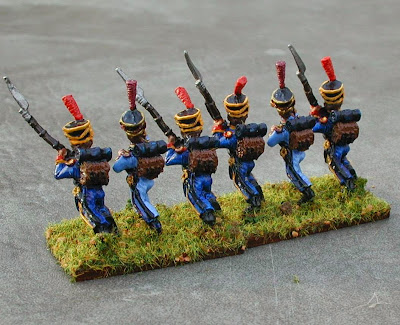 Many of the Marins were captured at the debacle at Bailen in Spain in 1808, During the 1809 campaign in Austria, a small contingent of the Marins manned a flotilla of small boots to protect the Danube bridges that the French crossed over to reach the Marchfeld for the battle of Wagram. The strength of the Marins was increased to 8 equipages in 1810; like the rest of the army, they suffered severe losses in Russia in 1812. A small detachment of 21 men and an Ensign accompanied Napoleon to Elba after his abdication in 1814... and were instrumental in helping him escape the island later! At the opening of the Waterloo campaign, the Marins, numbering about 150 men,  were called upon to storm one of the Prussian held bridges near Charleroi,. which they did with elan. 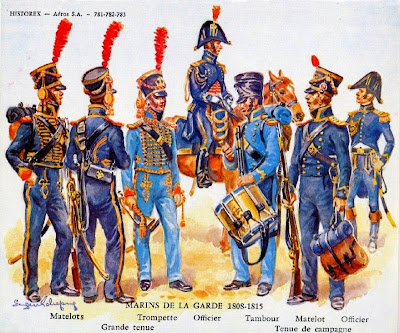 And another - note the red waistcoats showing. 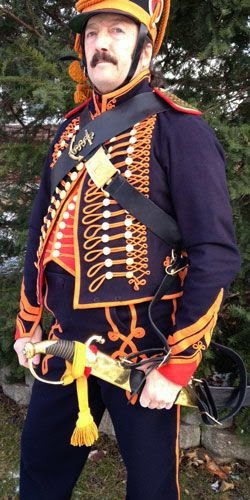 A modern day re-enactor wearing the magnificent uniform of the Marins. Note the brass anchor on the black cross belts.