I finished painting this unit on December 2nd, and it took place in the Austerlitz game. I just hadn't had a chance to do a post on it until now. While the Austruian army probably lead Europe in Light Infantry tactics during the 7 Years War, thanks to their Grenz troops, the attempt to convert them into something closer to line infantry resulted in a notable decline in their effectiveness at skirmishing and raiding activities. In 1798, 15 battalions of Light Infantry were raised from several existing units of Freikorps. Their existence was short lived, being disbanded in  1801. Their uniforms are rather interesting, so I will present the basic information on these units.

Jackets were essentially the same cut as for the line infantry, but were "pike grey" (Hechtgrau)in color. This is a blue grey, with the emphasis more on the blue than the grey. The top bar of the table of facings is as close as I could come for the hue. There is an excellent presentation of what the various Austrian facing colors probably actually looked like here. The units recruited in Italy had  "German" pants with gaiters, while the rest had the tight pants yellow braid  and short ankle boots of Hungarian units. In either case, the pants were Pike Grey as well. The facing colors appeared on the collar, cuffs, turnbacks, and the piping of the shoulder straps. It seems that the Italian units also had round cuffs and the rest (mostly) pointed cuffs in the Hungarian style. The helmet was worn as for the line infantry of the time, but with  a brass "F-II" cipher on the front instead of the usual brass plate. 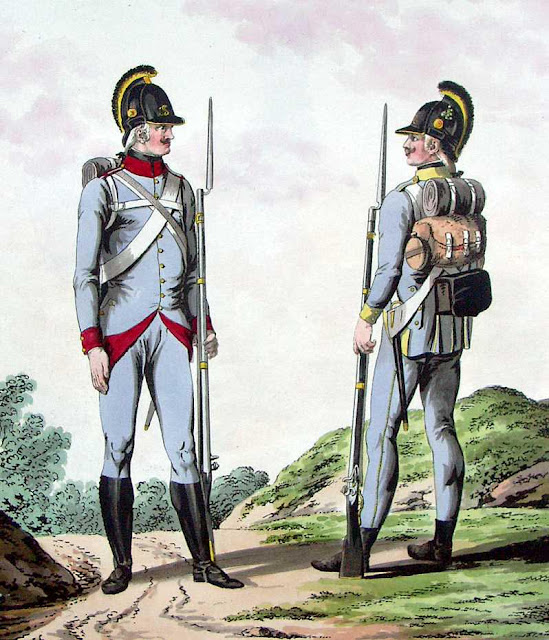 All in all an interesting uniform that requires pretty much just a paint conversion of Austrian and Hungarian Line infantry figures wearing the helmet. I think my friend Jon needs a unit of them in his early Austrian Army!  :-) 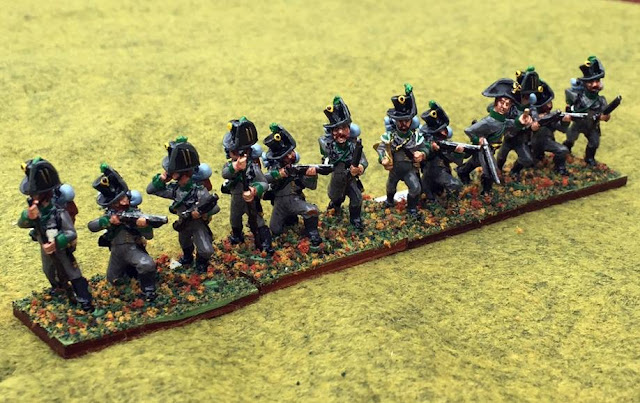 When the Light Infantry were disbanded in 1801, their place was taken by 3 battalions of Jagers. Originally, these were part of IR 46, but were reassigned as IR 64, and named the Tiroler-Jager Regiment. When the Tyrol was lost in the treaty of Pressburg following Austerlitz, it was restyled the Jager-Regiment Chasteler. 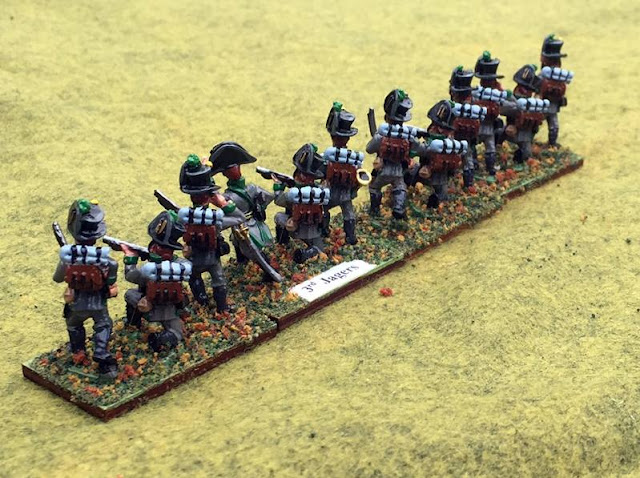 The initial uniform was similar to that of the earlier  light infantry, with hechtgrau jackets and pants, grass green facings, and all black leather work, topped by a helmet with a green crest. 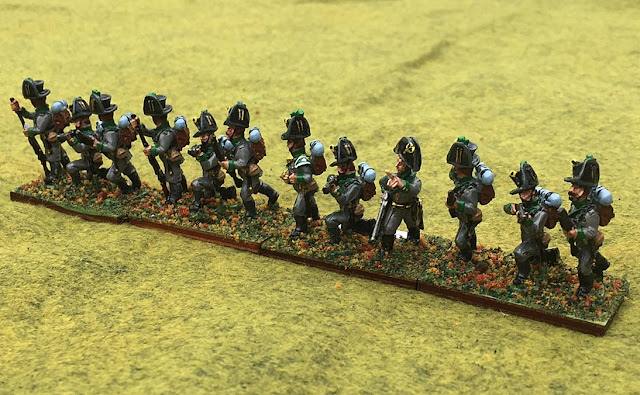 The familiar Korsehut as seen above was evidently not adopted until as late as 1808, when the Jagers were reorganized in to nine, 2-company "divisions". Each "division was to be expanded to a six company battalion in wartime, with war being anticipated in 1809. In 1813, the Jagers were increased to 12 battalions 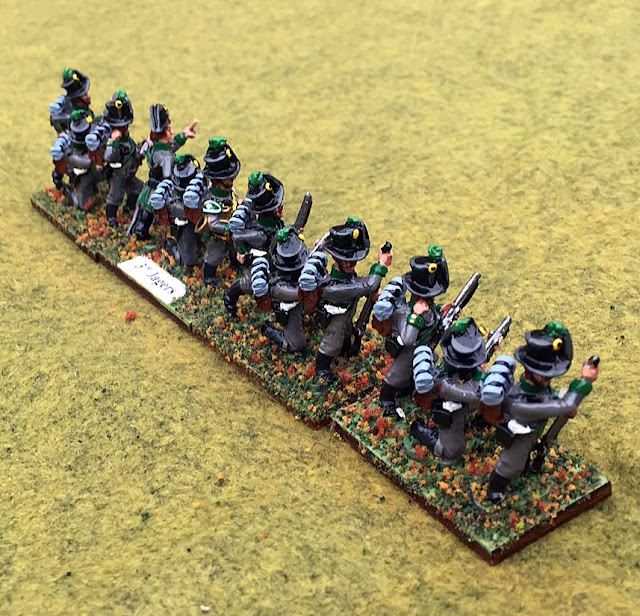 I will be discussing the 1808 uniform in another post; this small unit of 12 Old Glory 28mm figures has a sister unit of 18 yet to come. I will note that I opted for the more traditional medium grey color these rifle armed  Jagers are usually depicted in, rather than the bluish, proper hechtgrau shade.