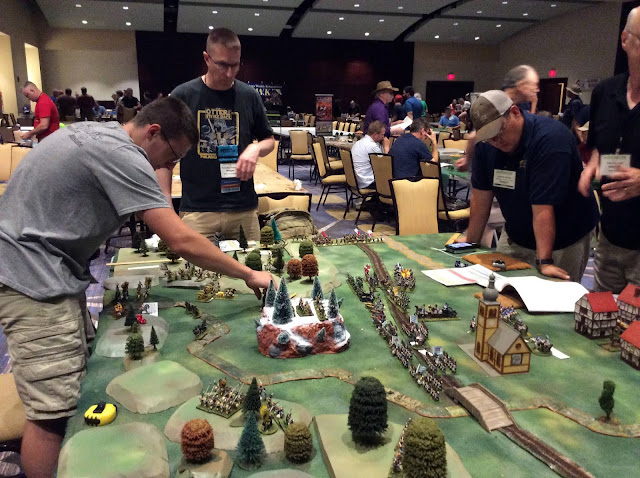 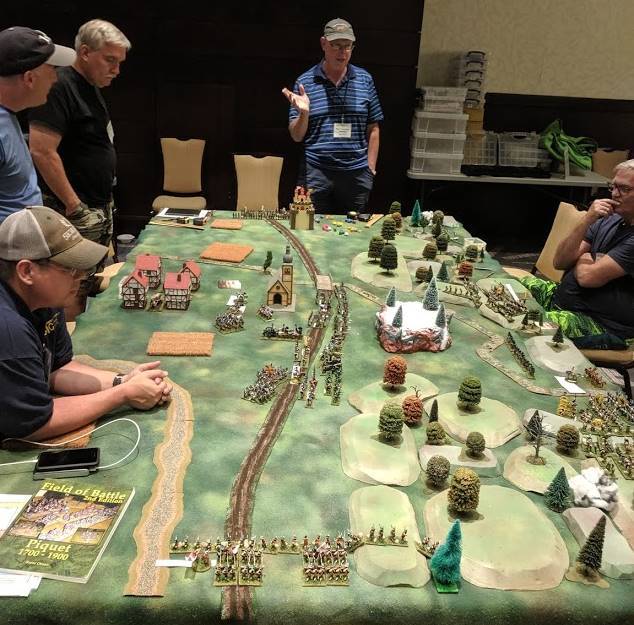 I briefly explain the situation and special rules (this photo and some others courtesy of Tim!) 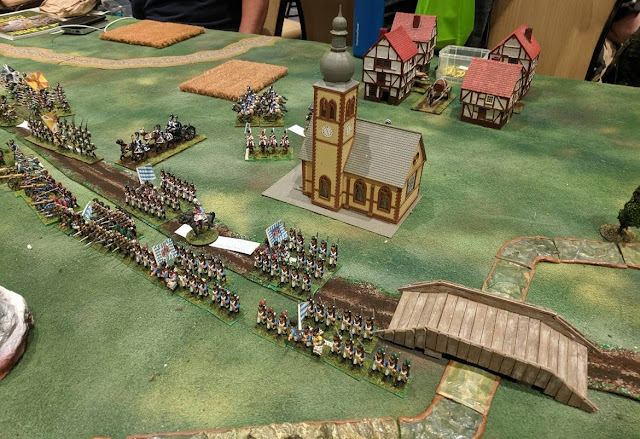 Close up of the Bavarian Left. 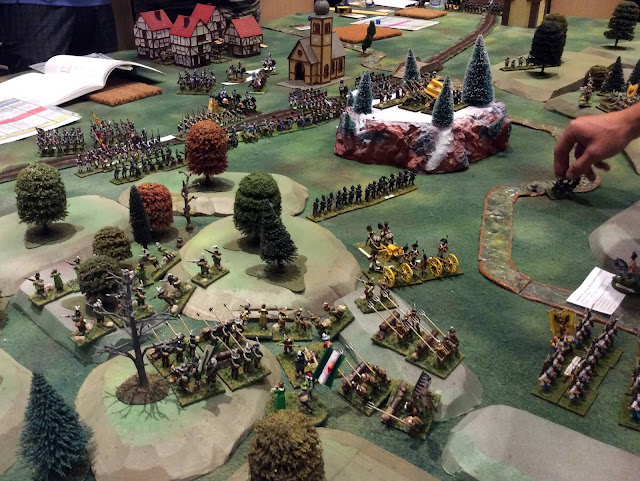 The snow capped piece represents Berg Isel itself, with Innsbruck in the distance. 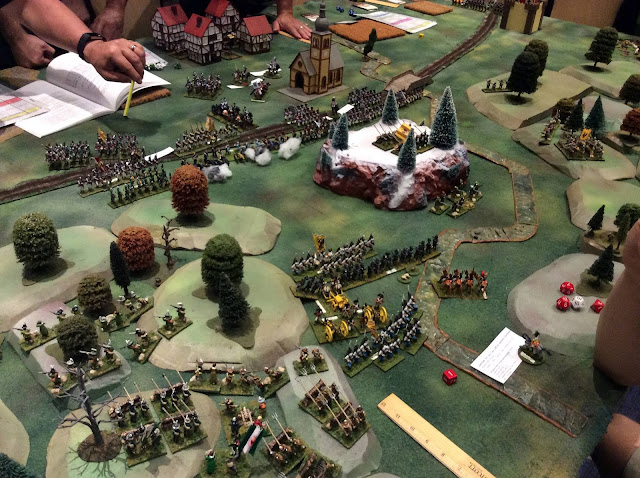 Early moves; the powerful Bavarian artillery make a direct advance perilous, but some Landsturm have occupied the Berg. 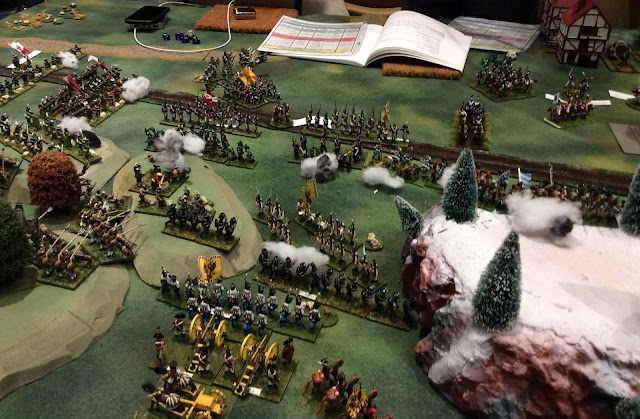 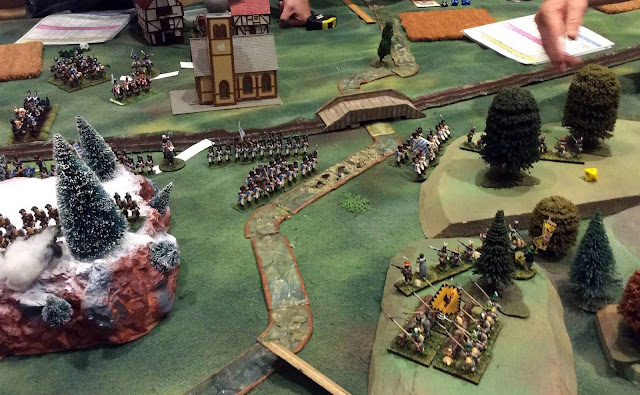 A Bavarian Brigade advances in to the rough terrain sheltering the command of the Capuchin monk turned soldier,  Joachim Haspinger (played that night by Michael Hopper) 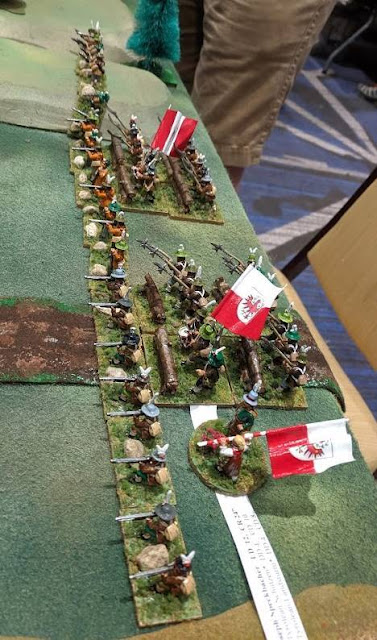 Rebel reinforcements under Speckbacher  arrive on the Bavarian Right... 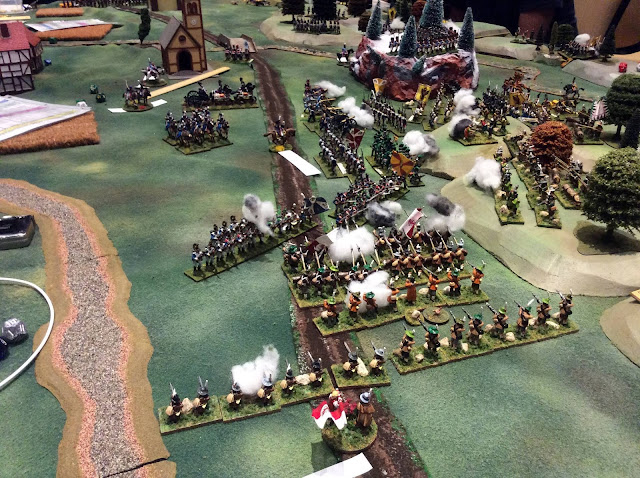 and catch the 2nd Bavarian brigade (heavily disguised as Badener's) by surprise!\ 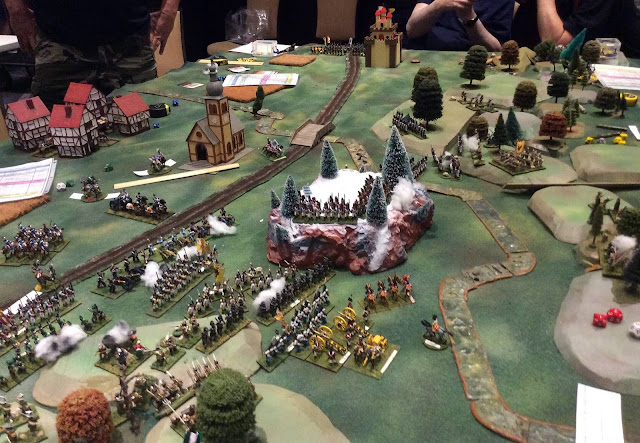 Overview of much of the battle from the Austrian/Tirolese perspective. 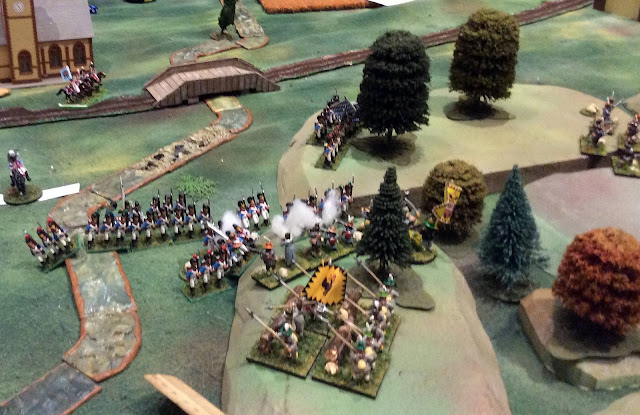 The Bavarians try to drive off Haspinger's command. 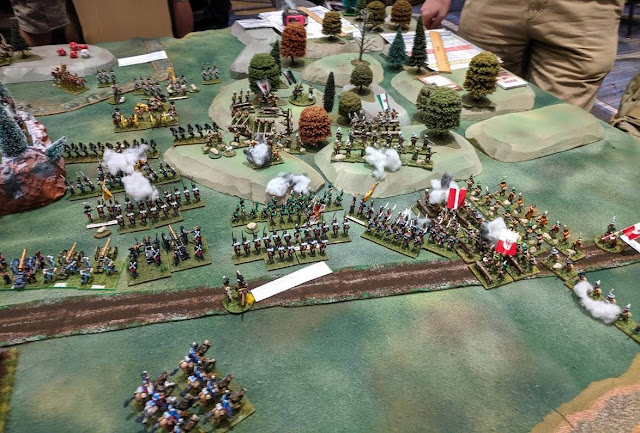 Speckbacher's men make their presence felt, with the rifle equipped  Schutzen firing and then the pole-armed Landsturm charging the thinned ranks of the hated Bavarians! 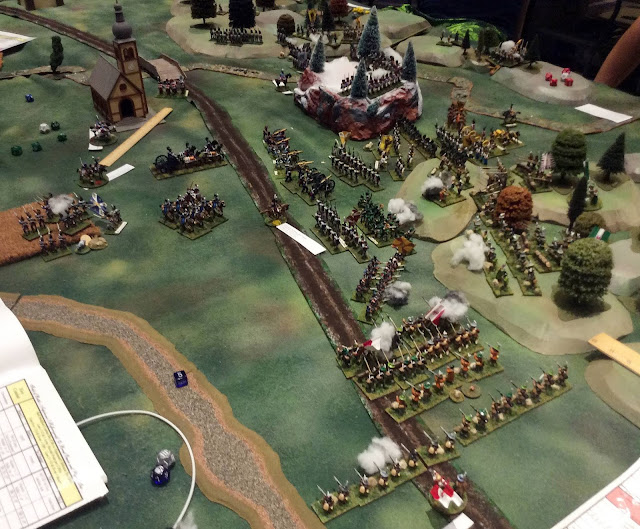 The "Baden" brigade is in trouble, but their Light Dragoons have faced to try to reduce the threat. 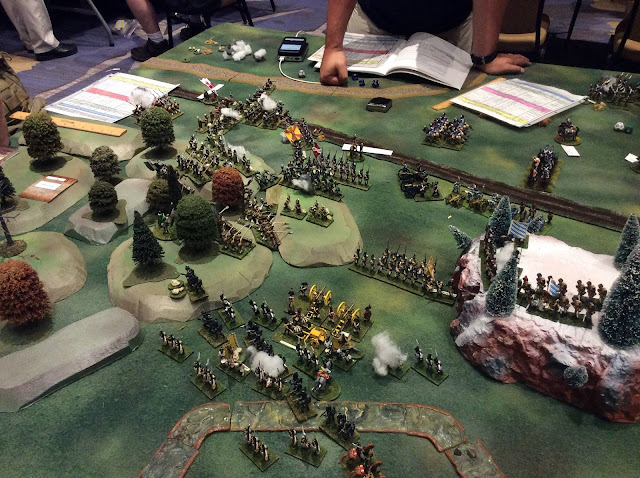 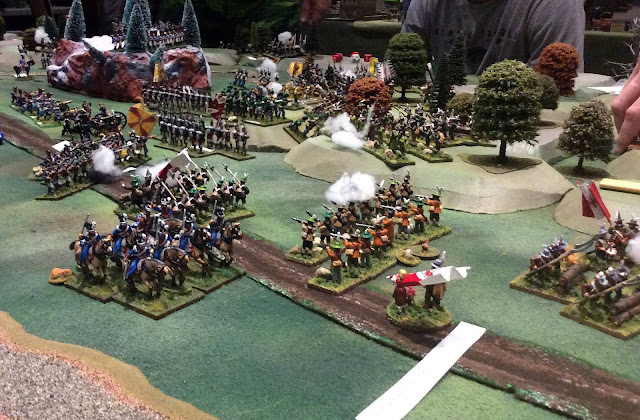 Can the Light Dragoons save the day against Speckbacher's command? 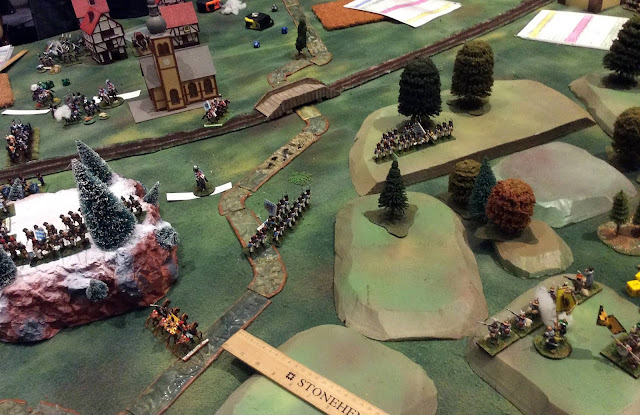 The lone troop of Austrian Chevau-Legers (with but one UI) sees a Bavarian regiment expose it's flank to them. If they can survive flanking fire from the Bavarian Lights on the Berg...
In the event, they do indeed shrug off the fire and charge, routing the opposing infantry. 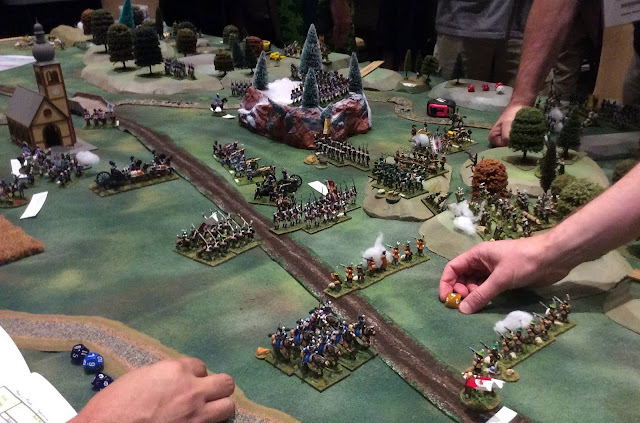 The aftermath of some glorious charges by the Baden Light Dragoons... 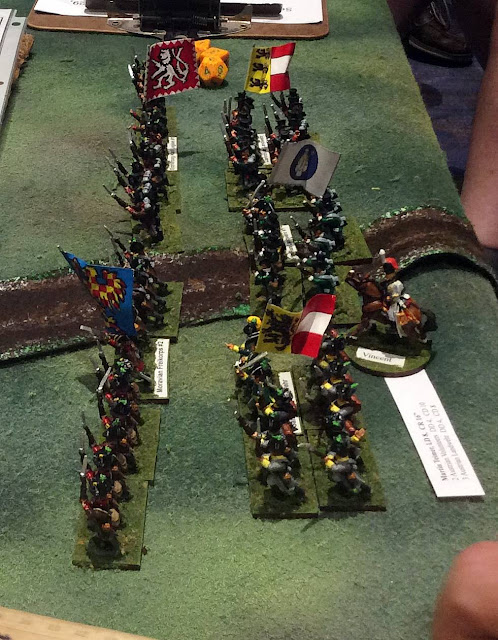 Another body of Hapsburg  troops arrives along the road to Inssbruck from the opposite direction. Can they close rapidly enough to impact the battle? 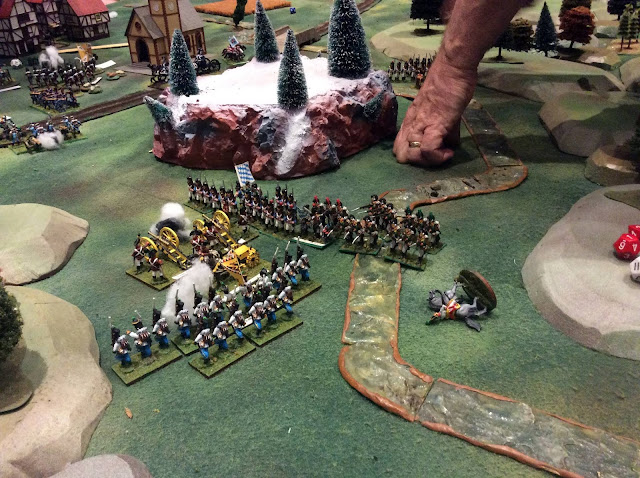 Some  bold Bavarians launch a highly effective charge down from Berg Isel onto the flank of the remaining Austrian regulars, severely wounding general Buol in the process. 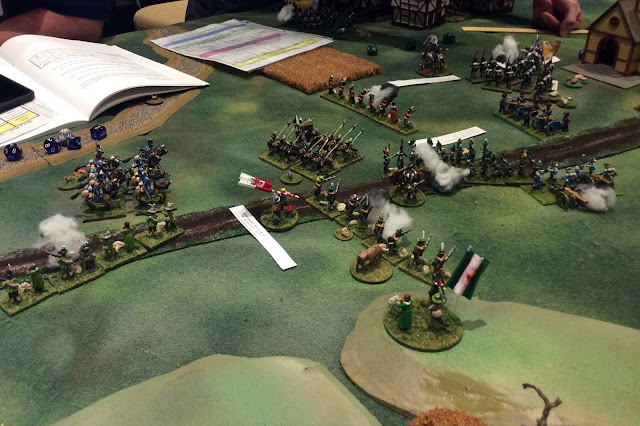 On the Bavarian right, it is a battle to see who will outflank whom, first, as both sides are almost out of Morale points!

This was a humdinger of an action, with both sides reaching zero morale points at one time or another. In the end, the brittle Tirolese units (all DD4 and with only 2 or 3 UI each) melted away about as quickly as their Morale points. The Bavarians suffered heavy losses, but were better able to rally their shaken and routed troops. In the end that made the difference between  defeat and a Pyrrhic victory, and the Tirolese failed Army Morale.
Posted by Gonsalvo at 10:40 PM