Building the next generation of gamers, one dice roll at a time.

Since I first had the pleasure of meeting Jared Fishman at Historicon 2012 in Fredericksburg, VA, I have been impressed by his passion for both our hobby, and for his chosen profession of teaching. Jared manages to combine both in a way that is inspiring and involving for his students. I have run or assisted with a number of games for the games club at Jared's school over the past 5 years, most of which have been chronicled on the pages of this blog. 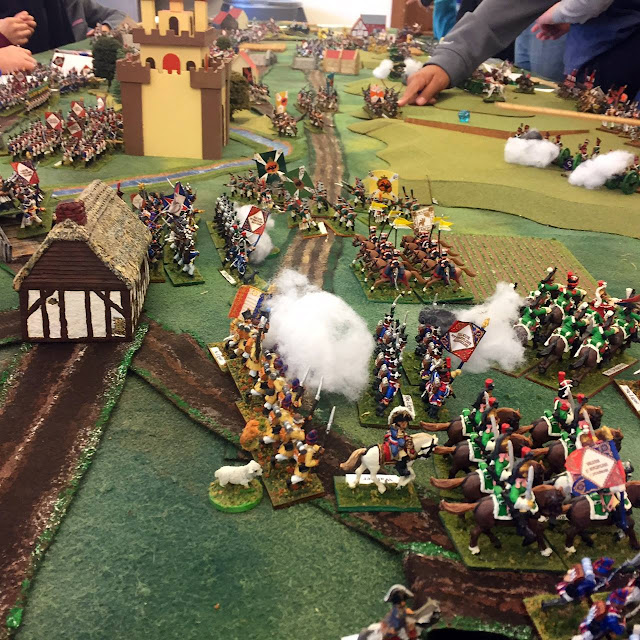 From the bio accompanying his presentation on Gaming in the Classroom at Historicon 2019:

Jared Fishman has been a history teacher for over 13 years, most of it at the Hackley School in Tarrytown, NY. He was the recipient of both The Mary Lambos Award in teaching and the Davidson Family History Chair. A lifelong member of HMGS (Historical Miniature Gaming Society), Jared has helped to integrate gaming culture into the Hackley community, running numerous game clubs for both MS and US students and founding the NYSGA organization in 2016 (New York Student Gamer’s Association). Most recently, Jared helped pen an article for Wargames Illustrated, and continues to explore new possibilities for the expansion of NYSGA into more schools, and ran a NYSAIS conference in 2017 (New York State Association of Independent Schools) entitled, “Roleplaying, Games, and Simulations in the Classroom” 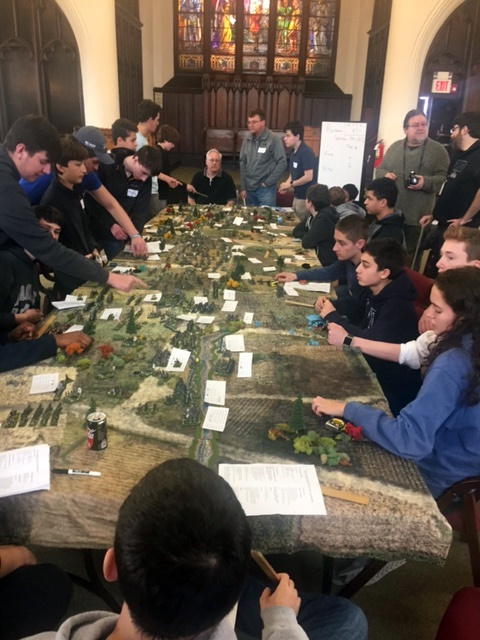 The huge Bordino game Jared ran at his school in 2016.

Now Jared is one of the founding members of HMGS Next Gen Gaming. Their mission, taken from their new website:

HMGS Next Gen, Inc., was founded in August of 2020 as an extension of the Historical Miniatures Gaming Society. Our goal is to seed and fund the growth of game clubs in the United States and around the globe. By facilitating game design thinking along with game based professional development, HMGS Next Gen will grow the hobby and the critical thinking that it fosters.

Currently, HMGS Next Gen is working with public and private universities, secondary schools, along with libraries and corporate organizations. We are composed of facilitators who have seen, first hand, the value of games as a learning tool. Games provide participants with an opportunity to explore diversity, teamwork and camaraderie. This is done through analytical thinking, leadership and stress management. The key developmental points carry over to real life skills that are used on a daily basis. To that end, HMGS Next Gen will provide game based services to support the development of our ever burgeoning client base. These services include both supplies and grant funding for new and growing game clubs. Supplies can include items such as paints, miniatures, rules, board games, roleplaying guides, and other components as needed. Monetary grants can also be provided for a club upon receipt of a simple grant application.     Another game based service and aspect of the HMGS Next Gen mission is the facilitation of “game days” for all levels of clubs. Given that not every environment has a seasoned or professional gamer, we would provide the service by partnering with experienced facilitators. This allows us to access already prepared facilitators who have the supplies and means necessary to run a fantastic and worthwhile event. HMGS Next Gen has run games on topics such as the Roman Empire, the American Revolution, and World War Two, and has the ability to expand this offering to almost every point in history.     When looking at corporate organizations, HMGS Next Gen can also provide professional workshops and training sessions on topics ranging from diversity training to decisive decision making, depending on the needs of the client. Using games as a teaching tool gives all participants an opportunity to connect, work together, seek advice, and grow.     Finally, HMGS Next Gen plans to hold a yearly conference designed to bring together clients, professional speakers, educators, game designers, and others for the express purpose of gaming and game theory exercises to explore their benefits in the classroom and boardroom.

Jared and I have discussed his plans for this new enterprise several times over the past year or so, and literally as I was composing this post, I see that they have run their first event, a fictional 1812 Napoleonic Zoom game involving 3 players on each side from the respective game clubs of Yale and Georgetown Universities. Jared and two of his students acted as GM's in New York, where the figures and miniature battlefields were located. Bloody Big Battles Rules by Chris Pringle, with some modifications for the Napoleonic era, were used. What's more, the author himself zoomed in as well to explain the design philosophy of the rules!

HMGS Next Gen will be having its own "Club Room" at "Historicon" this November.  I plan on running a number of my games there, which always welcome middle school and above aged youths.  Given what I've been painting the past year, one of them seems likely to be the Battle of Kadesh (Qadesh), said to be the oldest battle for which we have a detailed description (even if that is colored by the propaganda of Ramses II).