Historicon 2021 plans, and a brief poll!

I am in the process of finalizing my games for submission for the 2021 "Historicon" to be held in Valley Forge, PA, Thursday November 10 - Sun day November 14. In US terms, Valley Forge is fairly close to me, 200 miles or less away, so the drive time should be about 3.5 hours.

Most of what I plan to run is set. First there will be three games with To the Strongest!, comprising "Ramses II Greatest Hits"

#1 on Thursday, Foes East and West
New to the throne, a young Pharaoh Ramses II seeks to consolidate Egypt's power by defeating an alliance of her traditional enemies - the Libyans to the West and the Canaanites to the East.

#3 on Saturday, Battle of Kadesh, 1274 BC.
Said to be the earliest battle for which details of formations and tactics are known, it is also thought to have been the largest chariot battle ever fought. Ramses had the story of his great victory over the Hittites under King Muwatalli II literally carved in stone. Many historians suspect the battle was closer to a draw...

With the convention being "close" to home, I also plan to run a game Sunday morning. As per tradition, this will be a Naval game (quick set up and take down).In this case, Renaissance Naval, Oars and Cannons, Muskets and Swords! with my 15 mm Galleys, and the Galleys and Galleons rules, lightly modified for this era.

My dilemma is what to run for my Napoleonic game. I will use Field of Battle, 3rd edition, regardless.  I want to do a Peninsular War game this year. Well, I really want to run TWO of them, but sanity is beginning to impact my usual megalomania. I have narrowed the choices down to the following:

A) Battle of Ocana, November 19, 1809
Although outnumbered by more than 3:2, the French under Marshal Soult managed to score the greatest defeat of a Spanish army of the entire Peninsular war. Why not play the Spanish? You can hardly do worse than they did historically!
B) Battle of Fuentes de Onoro, May 5, 1811
Marshal Massena’s attempt to relieve the siege of Almeida is blocked by Wellington’s army, resulting in the bloody battle of Fuentes de Onoro. 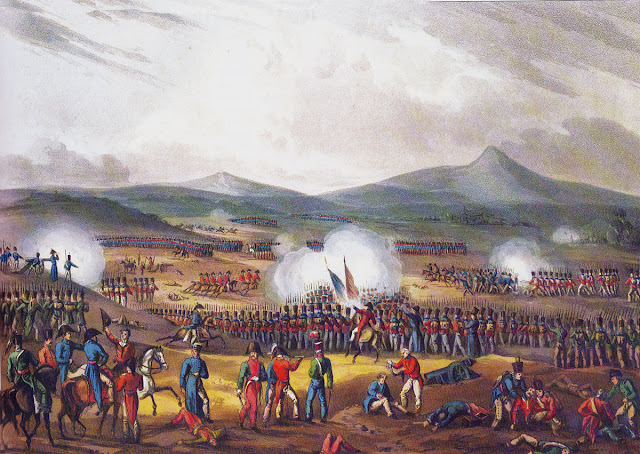 Both of these battles are about the same size. It looks like all of these games will be run in the club room assigned to HMGS NextGen, which will facilitate the logistics for the games.
So if my might enlist your help, dear readers, could you vote via the comments for your preference?
Of course, I may wind up deciding to do both anyway!  :-)
Posted by Gonsalvo at 10:35 AM

Email ThisBlogThis!Share to TwitterShare to FacebookShare to Pinterest
Labels: Historicon