Snappy Nappy, "Many Roads to Mantua", January 1799 Campaign in a Day: The Scenario

We played out the latest Snappy Nappy "Campaign in a Day event this past Saturday, held once again at The Portal gaming space in Manchester, CT. This one was based upon the events of January, 1799, the final attempt of four by the Austrians to relieve the siege of Mantua.

It is January of 1799. That upstart, General Buonaparte, and his ragged French have driven our armies from Northern Italy, with our remaining stronghold being the great fortress of Mantua. The French have had the city under siege since early June of last year. There have been three attempt to break the siege during that time, each defeated by the French by the narrowest of margins, although some provided the garrison a brief respite to collect food and supplies from the surrounding country side. Food is becoming critically short, and it is clear that our brave garrison cannot hold out much longer, being faced with impending starvation and alarming rates of illness amongst the soldiers and populace. The Aulic Council thus tasks you with defeating Buonaparte's army and lifting the siege of Mantua.

It will not be easy. You have part of your forces stationed far to the East of the city, but the bulk is stationed in Trente in the Tyrol. This leaves your men the unenviable task of advancing via the Alpine passes which are subject to sudden snowstorms. In addition, only the routes with good roads (those to to Rivoli and Bassano) can accommodate Cavalry and Artillery; any forces using other routes will have to detach their cavalry and artillery to another command. On the other hand, the forces in Trent could conceivably debauch onto the plain of Lombardy by five different routes: Bassano, Vicenza, Rivoli, Salo, and Brescia. This presents the opportunity to catch the French by surprise.  Additionally, a substantial portion of the French forces are potentially tied down maintaining the siege of Mantua, giving you a potential advantage in numbers... if you can exploit it. The Aulic Council has one other requirement: at least one, and up to all three, of the commands at Trente MUST be sent to the West (i.e. towards Rivoli, Salo, and/or Brescia)

The Garrison may attempt a sortie should the forces investing it (within 12"of its walls) drop to 75% or less of the strength of the garrison (infantry and artillery units only are counted).  Should Austrian forces inside and within 12" of the Fortress ever exceed twice that of any French troops (once again, counting only infantry and artillery units, and including the Garrison of Mantua), the the siege will be broken, and the French armies will have to retreat towards Milan.

Your forces are as follows :

In addition, you can call upon Tyrolian Militias to defend Trente if necessary. They will not leave the Tyrol (table T), however. They will muster (one unit each  of Schutzen and Landsturm at each town on that table) should any French troops appear on that table. The Schutzen companies, being very familiar with the mountains, may enter move across them at 3" per turn, which no other troops may do. .

It is January of 1799. The Directory is pleased with how you have driven the Austrians and their lackeys from Northern Italy, but we are concerned that, despite the fresh reinforcements we have recently sent to the Army of Italy, the great fortress of Mantua still remains in Austrian hands, despite having had the city under siege since early June of last year. Although you tell us that the garrison's food is becoming critically short, our intelligence indicates that the Kaiserlicks plan one last offensive to relieve the city. You must not allow this 4th attempt to succeed!

You are aware that there are Austrian  stationed far to the East of the city, but the new troops have marched through the Tyrol, and are stationed in Trente. As you have pointed out to us in your many dispatches, there are two major (via Bassano and via Rivoli) and multiple minor routes by which the plains of Lombardy can be invaded from the North. Most likely, the Austrians will advance via several routes, as they have in the past  Only the routes with good roads (those to to Rivoli and Bassano) can accommodate Cavalry and Artillery; any forces using other routes will have to detach their cavalry and artillery to approach via another route.

Additionally, you must keep the Fortress of Mantua under siege. The Garrison may attempt a sortie should the forces investing it (within 12"of its walls) drop to 75% or less of the strength of the garrison (infantry and artillery units only are counted).  Should Austrian forces inside and within 12" of the Fortress ever exceed twice that of any French troops (once again, counting only infantry and artillery units, and including the Garrison of Mantua), the the siege will be broken, and our armies will have to retreat towards Milan.

Your forces are as follows:

* 2 of the Line (Seasoned) (Lannes) are en route from the South and will join your command later in the game. 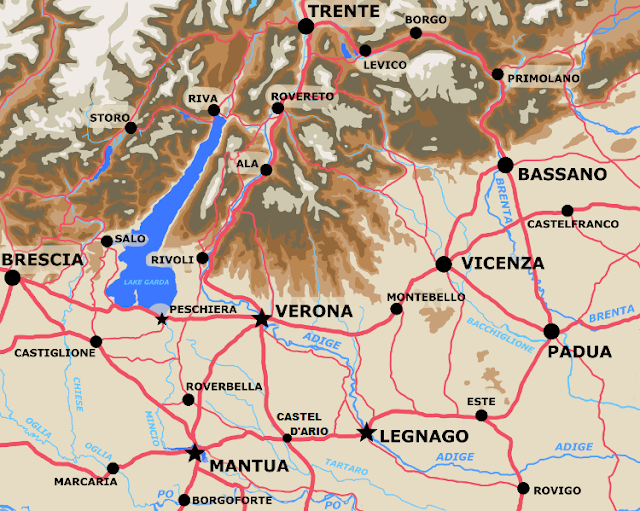 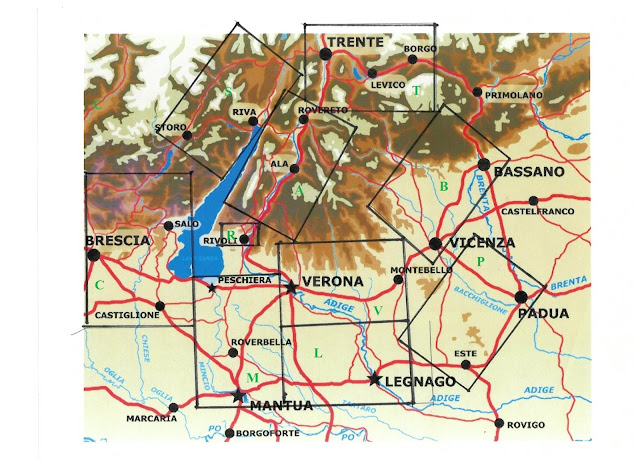 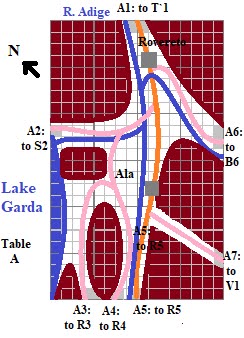 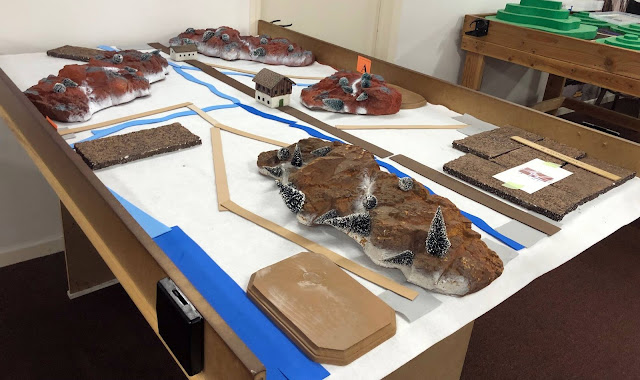 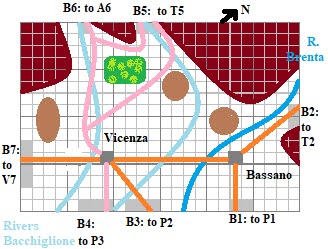 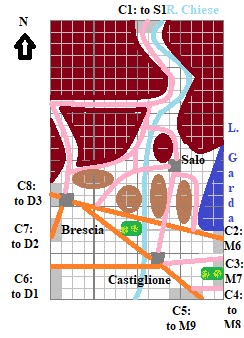 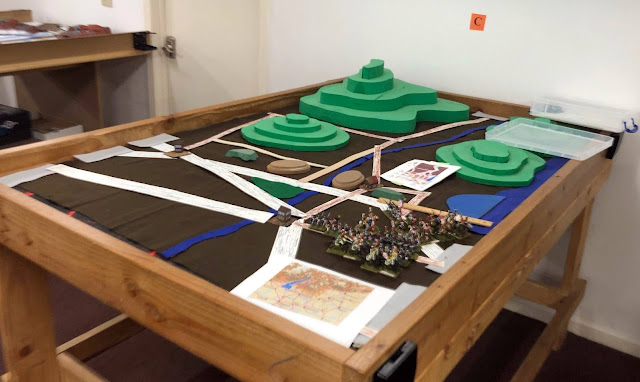 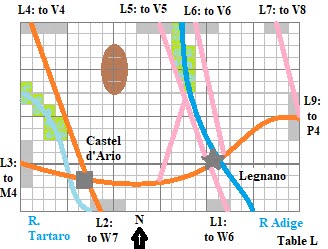 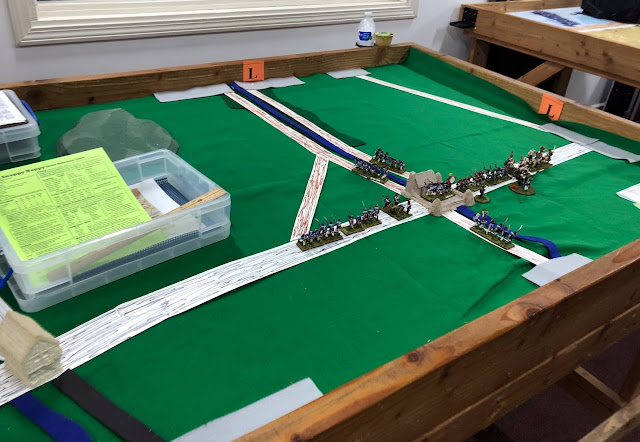 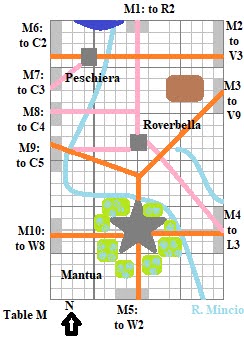 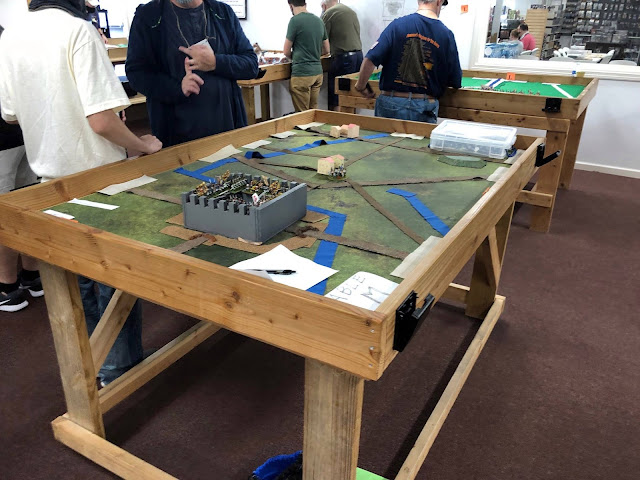 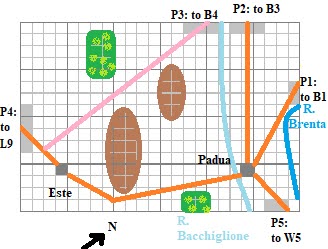 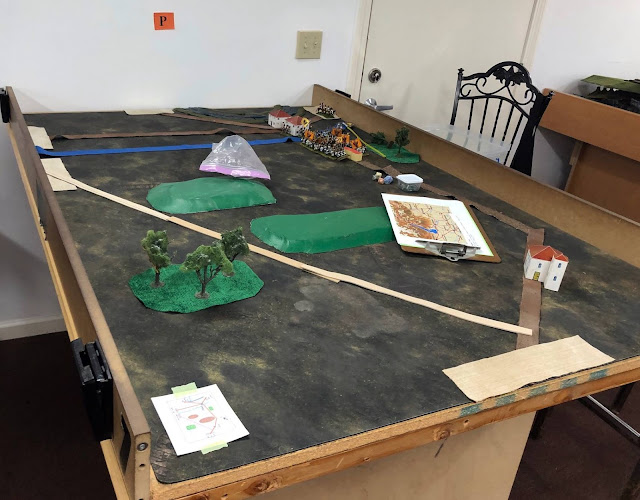 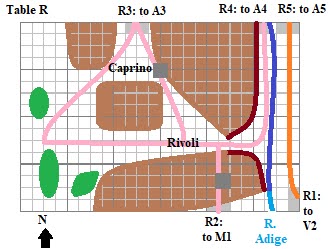 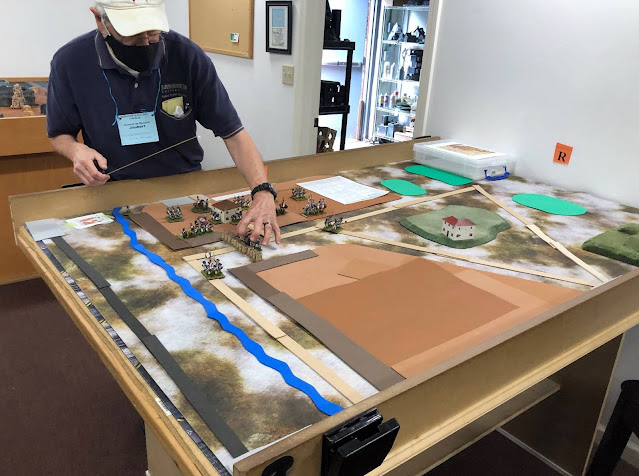 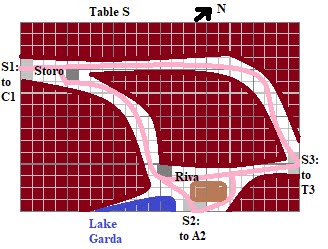 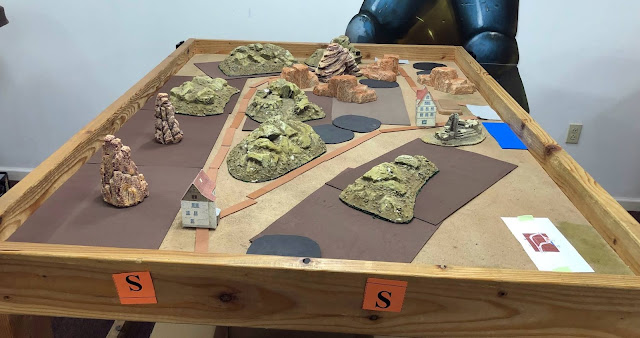 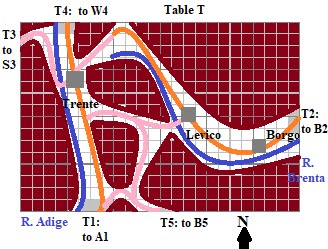 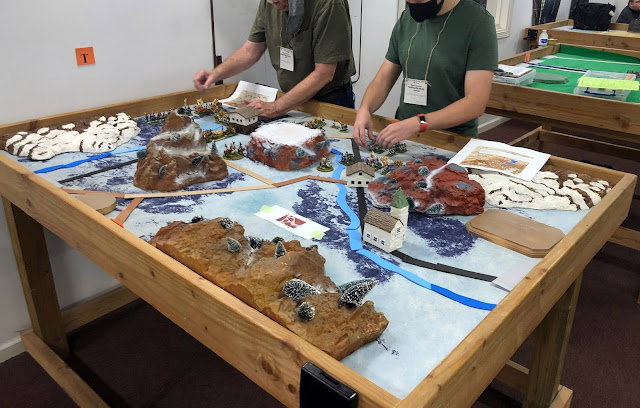 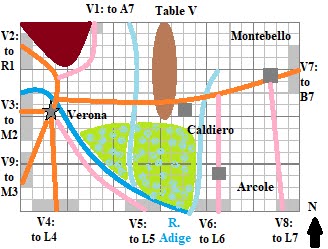 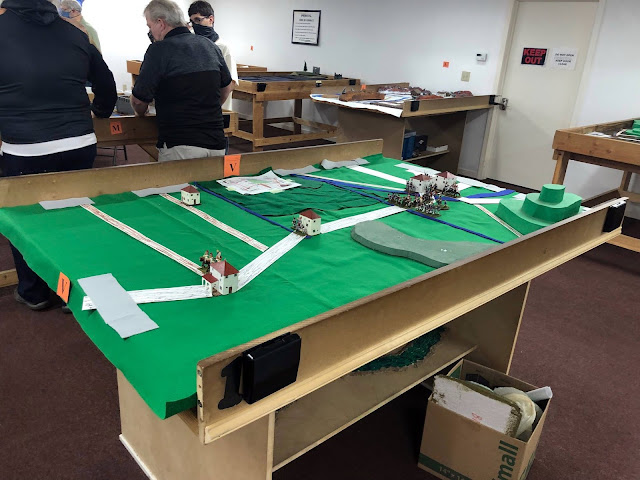 SUPPLY:
1) Supply status will be checked once an hour, on the hour.

3) Austrian forces must otherwise trace supply to Trente or Padua.

4) French forces must trace supply to Peschiera, Verona, or Legnano (the other fthree fortresses of the "Quadrilateral").

5) Tyrolian forces ignore all supply rules! They are always considered in supply.

6) Supply MUST be traced through the key cities and towns. On any given table, if a side does not control ALL of the key locations on that table, supply may traced into but not THROUGH that table.

7) Any troops that are found to be "Out of Supply" will immediately take one and only one Morale check roll immediately, with results imposed immediately. Additionally, Troops that are out of supply may not advance more than 6” from their present positions; otherwise they may only move towards their base of Operations (Mantua for the garrison, Padua or Trente for the rest of the Austrians; Peschierra, Verona, or Legnano for the French).

TERRAIN
On the table maps:
"Mountains" and "Swamps" = Impassable
"Woods" = Rough
"Hills" = Broken
Buildings = Town or City as above.
All rivers are 1" wide (thus NO small arms fire across them), and may only be crossed at bridges, whether permanent or pontoon.
Pontooniers: May not attack or initiate Melee. To Build or take down a pontoon bridge, once the Pontooniers are in position, check once per turn as per the rules; all nations need a D10 roll of 7+; if unsuccessful, the next turn they need a 6+, if unsuccessful again then on the following turn they need a 5+, and so on. Minor rivers (light blue on the table maps)
are bridged with one successful attempt; major rivers (dark blue on the table maps) require
2 pontoon sections each to bridge. Each command has a unit of Pontooniers.
TOKEN FORCES
Some difficulty can arise when players leave token garrisons behind to hold critical bridges and bottlenecks, etc. It can unduly penalize opponents encountering such token forces when they have to twiddle their thumbs, unable to move because their opponent keeps running away to do moves in a much bigger battle on another table.  Of course, delaying the enemy (within reason), as well as getting notice of the movement of enemy troops into the area, are the two main reasons for leaving token forces to begin with.

1) A "Token Force" consists of not more than 3 units of infantry, or a single Cavalry or Artillery unit. Combined arms forces are never considered "Token Forces".

2) Wherever possible, the owning player will play their own troops provided that it does not unduly slow play on that table or elsewhere.
3) Another player on the same side, or the GM or their assistant may be assigned to run the force
if necessary to maintain the flow of the game.
4) Failing any of those, or by the consent of the owning player, the Token force may be run by the opposing player following the Default Orders given to the Token Force as follows:

Place a pre-printed card underneath the token force when it is detached, that gives it Default Orders:

- Hold at all costs, always orienting to fire on the nearest enemy

- Withdraw as quickly as possible away from the enemy.

- Withdraw as quickly as possible towards Deployment Zone  _________ (fill in the blank).
In the absence of a Default Order,  "Hold at all costs" is assigned.

On encountering the Token Force, and after suitably informing and getting the OK from the GM, a player could run his own troops and pretty easily and reasonably run the opposing token force. Mostly the token force is not going to move (or will move away as quickly as possible), so one only needs to do trivial movement or roll shooting and morale for it. The Token force will impose a 60 second delay per unit each turn on the cycling of the active player. In other words, a Token Force of 3 Infantry units would impose a 3 minute delay per turn cycle upon the opposing player. The timer on a cell phone or similar can be used to track such delays.