Snappy Nappy, "Many Roads to Mantua" - Austrian and French plans

We will attempt a counter encirclement by first seizing the French's supply hubs then using their cities to apply pressure on the siege force itself.
PHASE 1
I envision that Green Group will combine with Blue Group to make an attack on Legnago.
The whole of Pink Group will travel to Bassano then complete the sweeping front by taking Vicenza then Verona.
Pink, Blue, and Green are expected to form a unified front that will keep the French attention and cause fatal attrition. You are to establish a manageable envelopment of the French flank and maintain it until phase 2.
Meanwhile Orange and Red Groups will travel the road directly to Rivoli. The forces may split at the pass between Ala and Rivoli to apply pressure on Verona as Pink Group approaches.
PHASE 2
Orange and Red Groups will take and hold Peschiera,
We won't know where the French line will collapse, it could be Legano or Verona.
If the Peschiera cannot be taken or if there is a collapse in the center of the main line (Pink/Green Groups) then Red and Orange will dump their cavalry/artillery at Rivoli and and attempt to move infantry across the mountains to engage the French forces before they encircle Blue group.
We won't be concerned if Blue collapses while  Pink and Green are holding. In the event that Blue collapses first it will require Pink and Green to quickly press in on the French running Blue down to continue our counter encirclement.
Phase 3
At any point the French line leaves routes we should not make a straight march to Mantua but instead tighten our encirclement. This will force the French to draw forces from their reserves or better, their stronger flank.
Once the significant shift in French forces occurs then the commander encountering the least resistance should take initiative and punch through the French line and relieve Mantua.
The strategy is to force the French to break upon our stable lines, fight conservatively and let them open the first gap.
Steve Tarro C-in-C:  Baron Joszef Alvitzy (Dashing): Trente
Karl Newbauer Provera (Dashing):  Padua1
Freikorps (Conscript), 8 Line (Seasoned)  2 Medium Foot Batteries (Seasoned), 1 Hussar (Veteran), 1 Chevau-Leger (Elite), 1 Dragoon (Veteran),
James Sulzen Bajalich (Dashing):  Basano
2 Grenzer (Seasoned), 7 Line (Seasoned),  1 Medium Battery (Veteran), 1 Hussar (Seasoned)
Russ Lockwood Lusignan/Liptay (Dashing):  Trente
3 Freikorps (Conscript), 7 Line (Seasoned), 2 Medium Foot Batteries (Veteran), 1 Hussar (Veteran), 1 Dragoon (Veteran)
Sean Tarascio Koblos/Ocskay (Dashing):  Trente
1 Light Infantry (Veteran), 1 Grenadier (Elite), 5 Line (Seasoned), 2 Medium Foot Batteries (Veteran), 2 Hussars (Veteran)
Brian Carmody Reuss/Vukassovich (Dashing):  Trente
5 Grenzer (Seasoned), 5 Line (Seasoned), 1 Medium Foot Battery (Veteran), 1 Horse Battery (Veteran), 1 Hussar (veteran),  1 Uhlan (Elite)
Steve Tarro Wurmser (Reliable):  Mantua
6 Line (Seasoned), 3 Invalid Line (Conscript) 2 Fortress Artillery (Veteran - immobile). 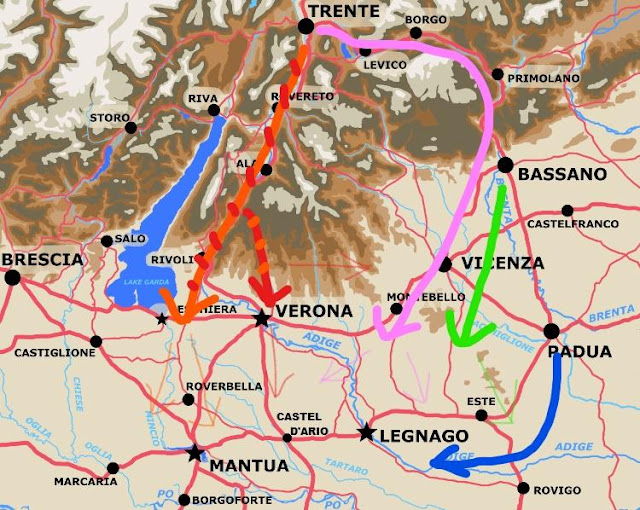 
General Joubert   Rivoli
5 Line (Seasoned), 4 Light (Veteran), 1 Horse Artillery (Elite) , 1 Foot Artillery (Veteran), 1 Hussar (Elite)
to send his Hussars to cross the Adige at Rivoli and probe toward Ala (token), the rest of his forces to remain at the Rivoli position as Austrian intentions unfold.

Maintain Siege of Mantua, and be prepared to dispatch spare troops to Verona, Peschiera, or Rivoli as needed.

The intent is to create a flexible defensive position along the Adige that allows for the shifting of forces along interior lines. The Austrians must use the roads east of the Adige for their cavalry and artillery- we must only determine where the main thrust is, and maneuver accordingly. If there is no main thrust, and they disperse their attack, we have already won. 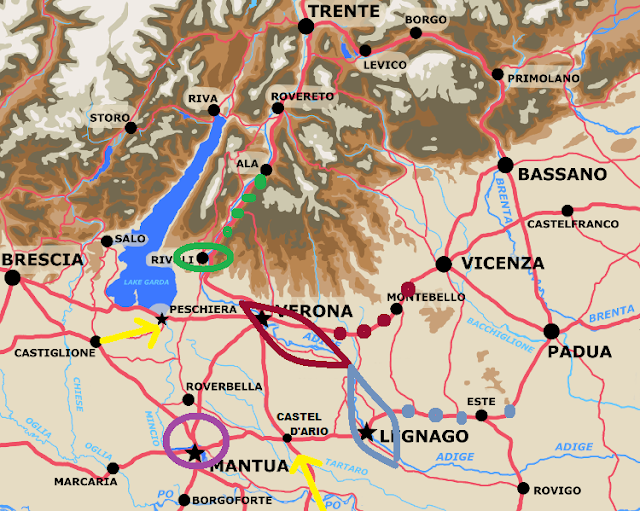 Representation of the French Plan

They must immediately transfer to other table OR on their next turn re-enter current table. Players get a free set up of the transferred units in other table’s DZ.

2) WHEN UNITS HAVE BEEN TRANSFERRED TO A DZ:

A) TURN SEQUENCE: Units join table’s current turn sequence, BUT only after opponent has had a full normal move phase.

B) EXIT! A Unit must exit a DZ as soon as it may move (acts as if in command). It could transfer back to its original table. NO ping ponging between tables!

C) SAFETY: Units may not be attacked in nor attack from within a DZ.

Get the GM if you have questions. Above covers 90% of all situations & is all players generally need know. Following are special situations, but there can still be corner cases needing a GM call. The GM should probably keep an eye on situations like below for “ reasonableness”.

One Side Only: Enemy forces may never occupy the same DZ on a tabletop at the same time (exception: See Crowding below).

Retreats: Units may involuntarily retreat into a DZ (non-enemy occupied!), and must still roll all required MC. Retreat distance is ignored once the unit fully enters the DZ, and the unit(s) must transport to the connected table.

Simultaneous Opposed Entry (SOE): Enemy forces simultaneously enter connected DZs from opposite ends (Force “ b” moves from table B which is connected to a DZ on Table A where enemy force “ a” is simultaneously trying to in move opposite direction). General Rule: Stronger force pushes weaker force back. If it is not clear which is the stronger, then players dice off. In the case of the push back, the players (or if needed, the GM) should decide on reasonable placement of the pushed back troops — they should not be unduly disadvantaged (however, see Chasing below).

Chasing: Troops that chase enemy off table (and then want to immediately pursue) have to wait until the enemy clears the far DZ. (If time weighs on the chasing troops, they can well consider pursuing alternative routes.) Chased troops, trying to ping back to their original table follow the stronger/weaker force rule. If unable to return, they are destroyed. If the chased troops do return to their original table, the Crowding rule (below) likely applies (but the GM will likely need to make some sort of adjustments to insure reasonable things happen).

In game mechanic terms, the DZ concept is a “ safe” area both to enter (and safely scout the other table), and the DZ gives warning of approaching enemy to those already on the table,

In terms of simulation concept, a DZ is an area “ just far enough away” from the forces already on the table that the entering force can at least partially deploy (and the on-table force be forewarned of approaching enemy). Think of it as if the entering troops are debouching from a defile or bridge and are filing into battle formation and able to at least get a screen together to protect the deployment of the rest of the force. In some sense, while in transit between tables, the troops are in route march, occupying the entire path connecting the two DZs.

Depth: I like to make DZs sufficiently deep to allow say two infantry columns to deploy one behind the other (say 3-to-4” for 15mm figures, 5-to-6” or so for 25mm). That’s my rule of thumb.

Width: Generally, DZs should be wide enough that players can fit sufficient troops to provide a meaningful threat to enemy on the table top, but not deploy the entire entering force all at once. For 15mm, I think 8-to-12 inches wide works pretty well (25mm would be 12-to-18 inches). Wider or narrower is also reasonable, especially for particular DZs (e.g., a DZ representing a mountain pass might only be 4” wide, an inter-table connection representing much open ground might in fact allow an entire corps to fully deploy). I like to say 4” (15mm) to either side of a road or town as an easy rule of thumb.

(Peter's note - I use smaller DZ's, 3" deep by 3 - 12" wide. 3" is a mountain pass, major river crossing, etc. 12" is a major highway across open terrain, with most being 6 or 9" wide. That is mostly because most tables have many DZ's and otherwise they will be too close ton one another on the 4 x 6 foot tables we use at The Portal). 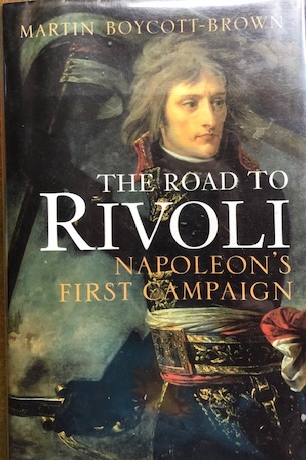