The Price of Crowns 2 Kingdom of Wurttemburg Kickstarter delivers... and another begins!

Several days ago, a rather large and quite heavy box arrived from Germany, containing the spoils of this great Kickstarter by Lucas Luber and Piano Games. It was well packed in eco-friendly shredded paoper4 and cardboard to protect the figures. It was quite a treasure hunt searching through it for the goodies, and I could easily have missed a smaller pack or two, but ultimately the weight of the metal gave them away, and they were all tracked down, including a single figure that had escaped from his baggie somehow!

I then set about the pleasant task of organizing the figures into the units that they will ultimately become! 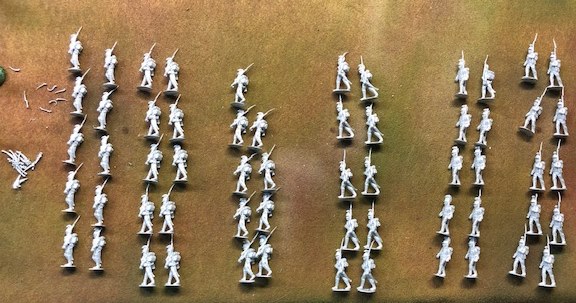 I got enough line infantry to make 6 units (my usual Napoleonic infantry units have 18 figures). The gap in column 3 above was left by the figure who had deserted from his company but was later successfully found, and returned to the ranks! 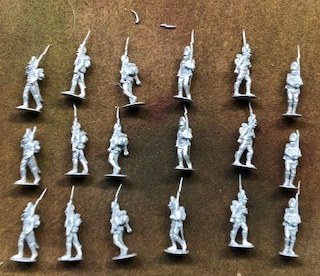 An unfortunately blurry photo of the Grenadiers with the transverse crests; I don't know anyone else who makes these. There has been speculation as to their reality, but Rawkins book and drawings by Faber du Faur. I will include three of these in each unit. 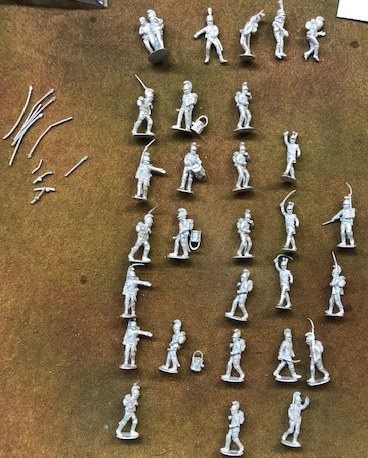 Because I only use 1 flag per unit, I got three of command set 3 and one of set 2 (from the 2nd Kickstarter, which has only Officers, NCO's, and a drummer). I now see that I need a second of set 2.  Like the rest, these are really excellent figures. At the toop is the infantry casualty set as well. 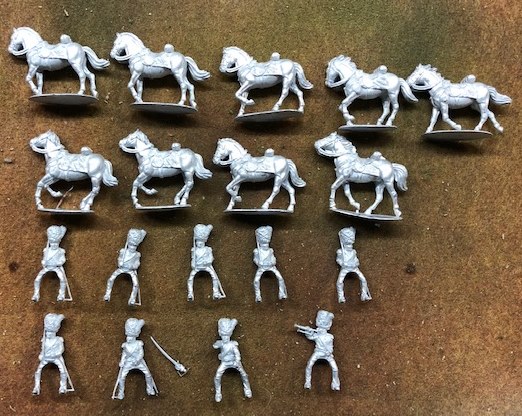 I went all in on tjhe cavalry, too; these are the Leibjager Guard - green and black uniforms, bearskin, etc. There was only one squadron of them!  They may get repurposed as pre 1810 French Carabiniers Cavalry in the bearskin, which I don't have in my collection. 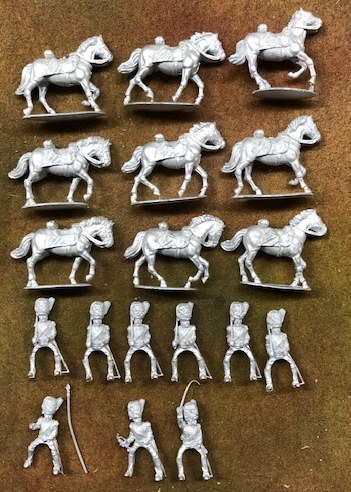 These re the Grenadier Guards - blue coats, cuirass, bearskin. The Leibjagers also wore the cuirass on occasions, so I think I may wind up doing 5 figures as them, and 5 as the Grenadiers (borrowing a spare from those above - my cavalry units have 8 figures). 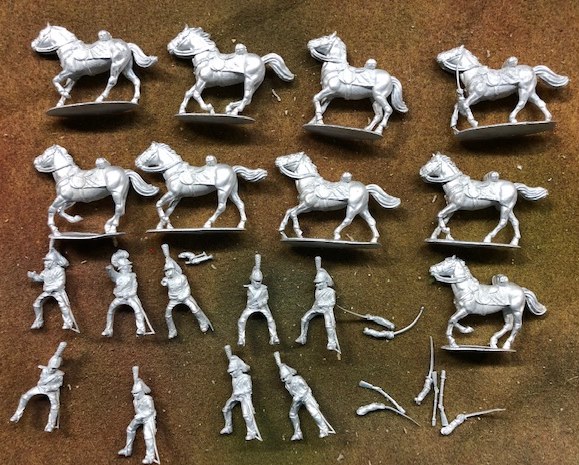 These are the Wurttemburg Chevauxlagers - excellent sculpts... not sure if the standard bearer in helmet is correct, but maybe! There wwere two regiments wearing dark blue coats, one with red and one with yellow facings. 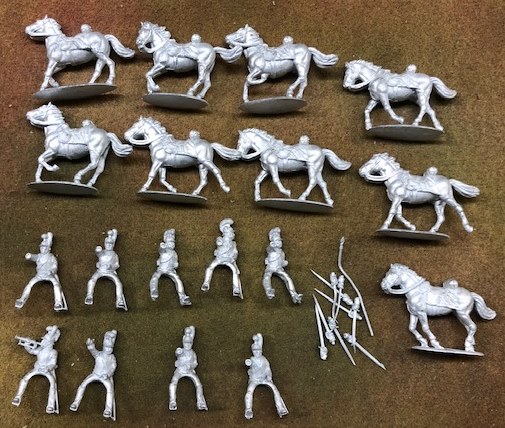 These are the Jagers zu Pferde, green coats, once again 2 regiments  with one faced rose pink and the other yellow. Rawkins gives interesting details about the crests (white over green and yellow over green respectively), and trumpeters wearing yellow jackets faced as per the troopers coats. From 1805 - 1810, the second, yellow faced unit, also wore "scharawaden" breeches, yellow from the waist to the mid thigh, and dark green in the lower portions! 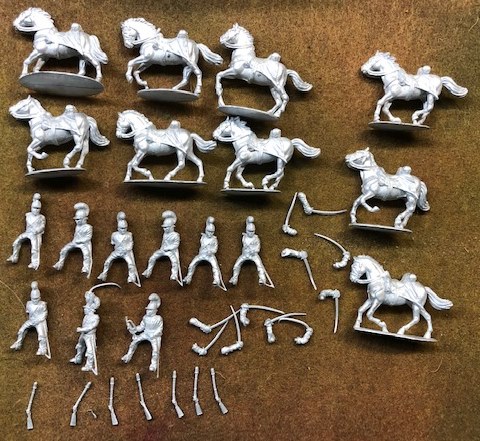 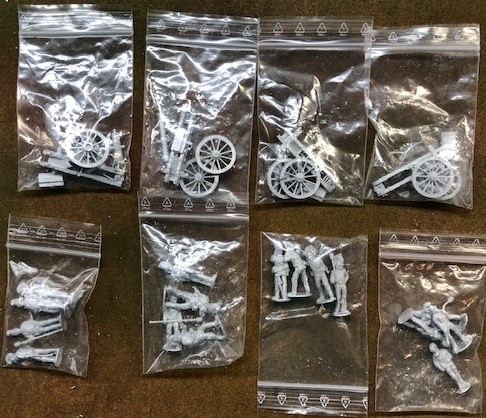 Wurttemburg Artillery. I got 2 each 6 lbers and howitzers, and one each of the horse and foot crews  in loading and firing poses. I use 2 guns with 6 crew for all but heavy batteries, so there will be a few crew left over. I like to include a mounted figure for Horse batteries, and thus will use spare figures from the Jagers zy Pferde and perhaps the helmeted figure in the chevauxleger pack for that. 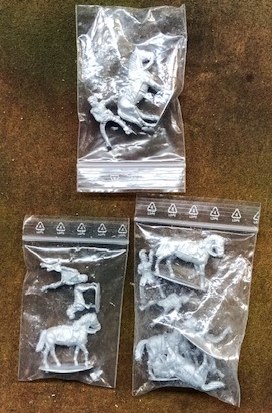 Command figures in their baggies; Crown Prince Friedrich Wilhelm with his Great Dane, French General Vandamme, who commanded the Wurttemburg Corps in 1809, and 3 mouinted officers, one in bicorn, one in helmet, and one in light infantry shako. 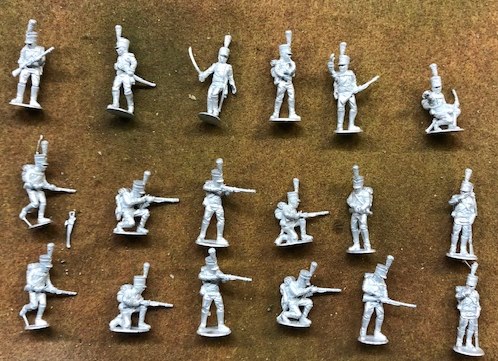 Wurttemburg Light infantry; green jackets faced light blue, with yellow crossbelts; quite striking. The light infantry performed especially well at the battle of Eckmuhl; the line infantry were not engaged. 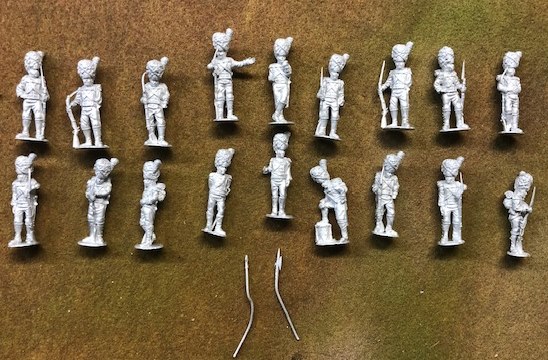 Finally, we have the Garderegiment zu Fuß; dark blue coats faced black, piped white. Looking suitably relaxed in camp; most of the time these chaps remained in Stuttgart!
The only criticism I would make about these otherwise superb figures is that the muskets and bayonets are quite slender, and thus prone to breakage. This is particularly true because the white metal alloy used is quite stiff and not very malleable; most likely it is lead free given its relatively light weight and stiffness, as well as origins in the EU (less lead in the environment is unquestionably a Good Thing). It might be worth considering making these a bit more robust in the future.  I won't be using the flagpoles provided for the same reason, replacing them with floral wire,
There are uniform guides and flags for free download at the Pianowargames site; my copy of Rawkins e-book on the Kingdom will come in handy as well. When completed, the force will have:
Infantry
6 Line Battalions (regiments to me)
1 Light Battalion
1 Jager Battalion
1 Guard Battalion
all of 18 figures each, plus a small handful (6) of skirmishers and the Casualty figures (5).
Cavalry
1 Chevauxleger regiment
1 Jager zu Pferde regiment
1 Guard du Corps "regiment"
1 Leibjager/Grenadier Guard combined regiment
all of 8 figures, except 10 for the last one
A few extra figures, likely to be used as Cavalry brigade commanders
Artillery
1 Foot Battery
1 Horse Battery
each of 6 crew and 2 guns
a few spare figures, possibly for use as sappers/for command bases.
Command:
General Vandamme
Prince Friedrich Wilhelm
3 additional mounted command
Total: 173 Foot, etc,,  34 Cavalry, 12 Artillery with 4 guns, 6 command.
Not content to have completed this project, with the last of the figures mailed out, Lucas has started his 3rd Kickstarter, this time dealing with the armies Hessen-Darmstatdt and Wurzburg. I've already pledged for 4 Hessian units, a battery, and High Command, and am eagerly awaiting the availability of the Hessian Chevauxlegers! The base project was funded within 3 hours! 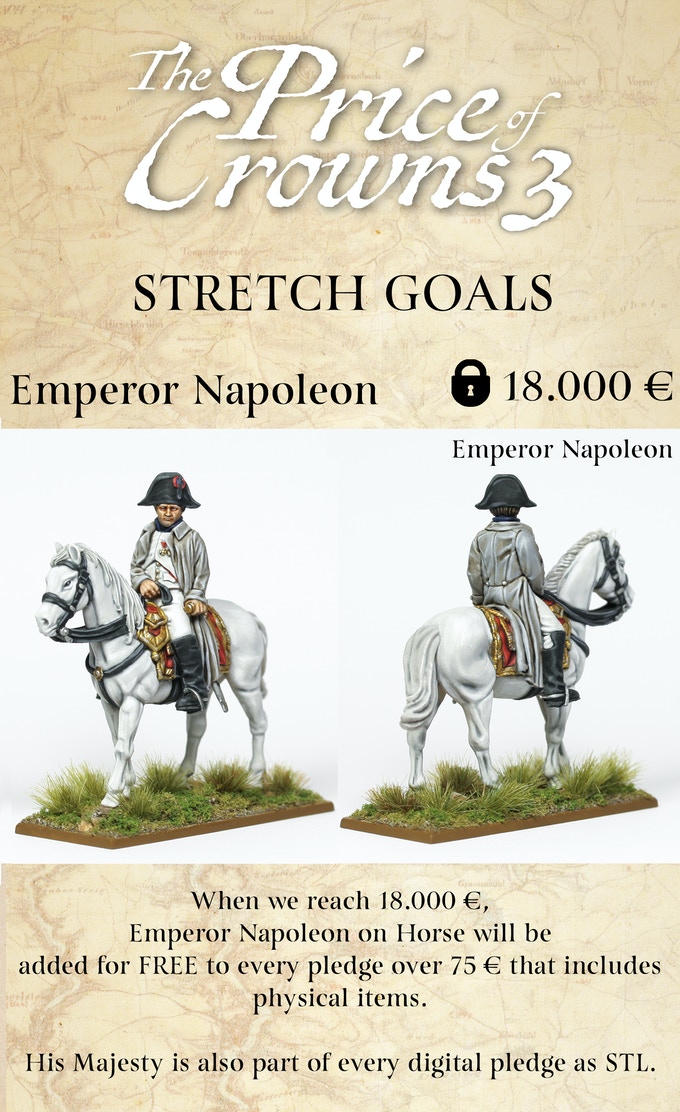