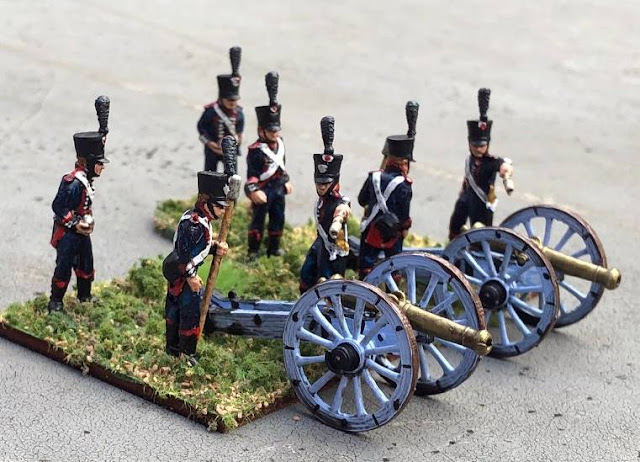 The Army of Hessen-Darmstatdt included a Corps of Artillery. During the Napoleonic Wars, it was initially it was organized into "batteries" of  (usually) 2 x 6 lber guns each, and intended as sort of Battalion artillery for the infantry units. The woodwork of the artillery carriages was painted light blue, with the metalwork on the carriages painted black. 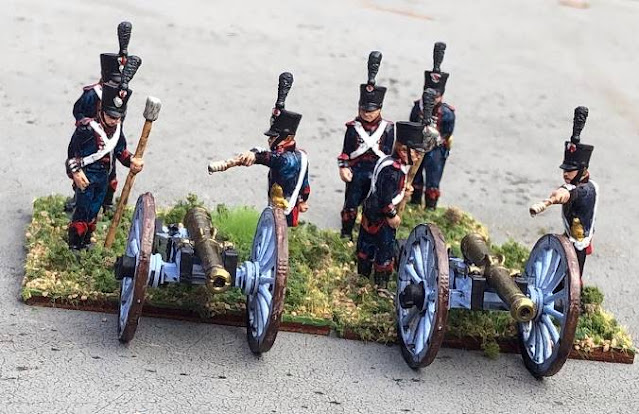 By 1807, the total strength of the Artillery was up to 8 x 6 lber cannon and 2 Prussian 7 lb Howitzers. An artillery company fought with the Hessian infantry contingent during the invasion of Russia in 1812; 3 gunners, 1 gun, and 3 caissons actually returned to Darmstadt.  As can be seen, the uniforms of the gunners were dark blue, with black cuffs, collars, and lapels piped red, and decorated with white lace. That lace must have been a bear to keep clean when working around black powder!  The turnbacks, like that of the infantry, were red. Shoulder straps were dark blue piped red.
In 1809, the Hessian contingent formed a brigade of 6 battalions within the Division of Cara St. Cyr (not to be confused with the future Marshal), as part of Massena's Corps. They were especially heavily engaged in the intense fighting around Aspern. An artillery contingent accompanied the battalions sent to Spain in 1809 as well. 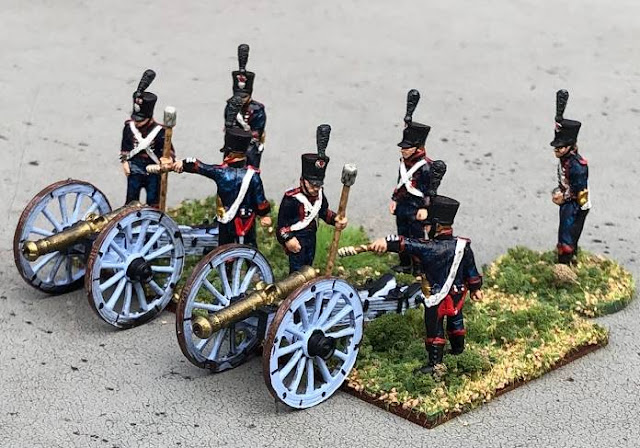 For the 1813 campaign, the artillery was greatly expanded to 4 companies, each equipped with six 6 lber cannons and two 7 lb Howitzers. The ginners wore a black shako with a white metal plate on the front, and short black plumes. The national cockade was white with a red center. 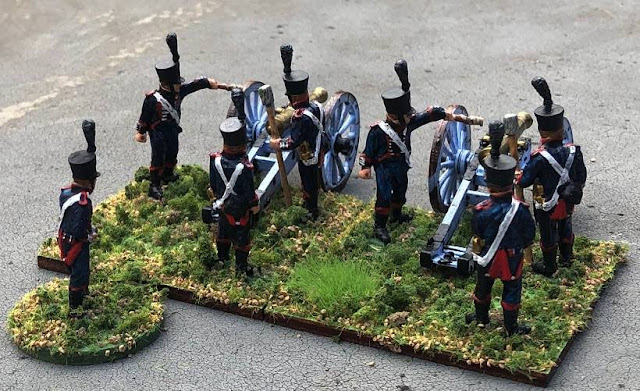 Hessen-Darmstatdt was one of the founding states of the Confederation of the Rhine, formed in July of 1806, and supported Napoleon and France until after the Battle of Leipzig in November, 1813, at which point it joined the Alliance against France. Trousers were dark blue, and black "Hessian" boots with red trim were worn.
The guns and crews are white metal, digitally sculpted by Lucas Luber of Piano Wargames, and cast in Germany. Marvelous stuff, and I am not aware of anyone else who has done figures for the Hessian artillery.