In 1809, Baden was still ruled by Karl Friedrich, now 81 years old and failing. He had ascended the throne at age 18 as Kurfurst, or Electoral Prince of Durlach-Baden. Upon the death of  Markgrave Augustus George of Baden-Baden in 1771, the two halves of Baden were reunited after several centuries apart under Karl Friedrich, who at that time was considered one of the epitomes of an enlightened ruler of the 18th century. The Prince's territories were still quite fragmented and discontinuous. Allied to the French in the 1805, 1806, and 1807 campaigns, the Peaces of Pressburg in 1805 and of Tilsit in 1807 and the dissolution of the Holy Roman Empire resulted in the elevation of the state to a Grand Duchy and membership in the Confederation of the Rhine (1806), as well as a sizable expansion in its territory and population. Indeed, between the unification of the two lines of Baden in the preceding century, and expansions resulting from the Napoleonic Wars, the territory ruled by Karl Friedrich quadrupled by the time of his death in 1811. Although I couldn't find any readily available hard data as to population, my best estimate would be that by this time the population of the Grand Duchy was probably just under 1 Million. Indeed, I found Baden among the least well documented of all of the states of the Confederation of the Rhine. Even Osprey, which has no less than five books on "Napoleon's German Allies" fails to cover Baden!

The artillery aside, the armed forces of Baden hadn't made a particularly favorable impression upon their French Allies in 1805 or 1806. With the expansion in Baden's territory and membership in the Confederation came the demand to modernize and expand the armed forces of the state. Still, it was not until 1806 that the powdered queue was abandoned. In 1808 conscription was instituted and the tactics and uniforms of the age of Frederick the Great were exchanged for French drill, organization, doctrine, and rank distinctions. By the start of the 1809 campaign, the Army of Baden consisted of:

The troops of Baden played a significant role in the 1809 campaign, mostly fighting as an infantry brigade within Legrand's 1st Division of Massena's 4th Corps (the Light Dragoons were assigned to Maraluz's Light Cavalry Division of the 4th Corps). The Hessian contingent also served in chiefly in Massena's Corps. Troops from Baden would fight at Ebelsberg, Aspern, Raab, Wagram and Znaim, and subsequently participated in the final suppression of the revolt in the Tyrol and Vorarlberg.

At Historicon 2007, a new company made its appearance in the overflow area (balcony), Pontoonier Miniatures. Their slogan is "Bridging the gap in Miniature Wargaming", and their products included Napoleonic Baden infantry - the first I'd ever seen figures designed for Baden in 28mm. Sadly, by the time I discovered them, they were all sold out. As I knew I'd need a Baden contingent for the 1809 project, at Historicon 2008 I made it my first priority to head to their stand and buy as many as I could - which still wasn't enough for the three infantry units I had planned, so I ordered the rest... and waited, and waited. Finally emailed them a number of times about the order, which they eventually responded to (evidently the first several went into their "spam" folder) and stated that the figures had been sent out  a month prior; however I never received them. After confirmation, they sent out a replacement order, and I did get that within a few weeks. Sadly, the company has evidently had continued problems with order fulfillment, and non appearance of their website. They do still evidently attend some conventions and sell there, so my advice would be to buy only in person at a show until there is confirmation that they are actually processing mail orders successfully. This  is a shame, really, because as you'll see shortly, these are very nice figures. They are large, almost in the Front Rank range for size, but slimmer. When I talked to them in 2008, they had plans to bring out Baden Artillery and Cavalry, but I highly doubt that they have materialized. Once again, really a shame. Oh well, on to some pictures! 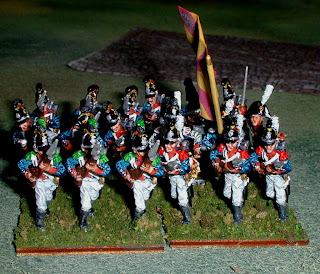 First up is the IR #1, Leib-Infanterie-Regiment Grossherzog. With its scarlet facings, quite a striking unit, don't you think? The coats are actually dark blue, although the photo makes them look more like Bavarian Cornflower blue, which they most definitely are *not*. 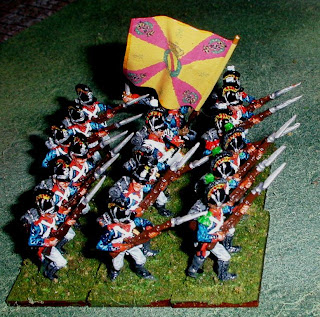 Although the helmet is reminiscent of the Bavarian Raupenhelm, note the distinctive alternating red and yellow stripes on the comb of the helmet. Enamelled on, these were unique to Baden, reflecting the colors of the Grand Ducal arms, seen in the center of the standard (downloaded from Napflag). 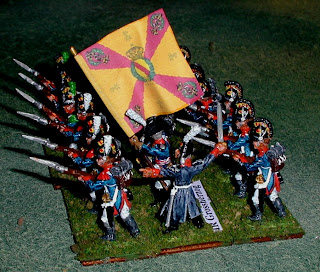 Note the officer in Bicorn and long grey coat, as well as the red-within-yellow cockade of Baden. Ideally, this one unit, as the Leib regiment, should have white lace on the buttonholes, collars, and cuffs. I didn't paint them with the lace on their uniforms myself... so sue me, LOL! 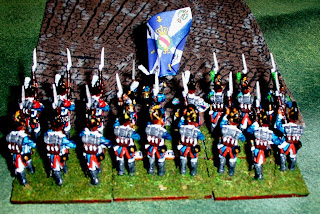 The next unit is the IR #3, Linen-Infanterie-Regiment Graf Hochberg. There is some confusion as to which regiment was sent to Spain, and which unit had which facing color, probably because it looks like the troops sent to Spain probably consisted of 2 battalions, each from a different regiment and thus with different facings. I have chosen to follow Gill on this unit, giving them white facings. 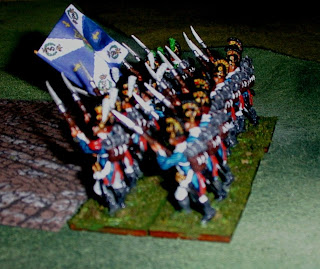 Somewhat blurry photo of IR #3. The other Baden Line regiment in Massena's Corps was the IR #2, Erbgrossherzog, which had deep yellow facings.

Here we see the Jager Battalion Von Lingg, skirmishing in a woods somewhere in central Europe! They wear the traditional dark green jacket of German Jagers, with black facings piped in white, and silver buttons with grey pants. Very snazzy! 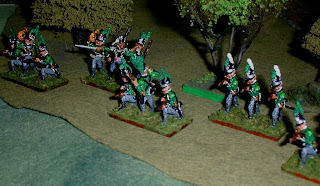 Note the green "sausage roll" on the helmet, and the white plumes on the Grenadier's helmets, while the remainder of the companies have green plumes.  All have green epaulets - at least in 1809!

Silver metal fittings on the helmets, grey pants, and red/yellow braided cords for the hornists complete the look of a quite unique unit. 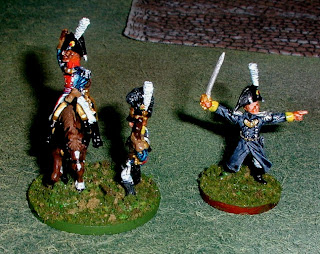 Here is a mounted senior officer, with a company officer of Grenadiers from IR #2, and also another regimental officer  wearing the grey greatcoat with the yellow facings of IR #2. 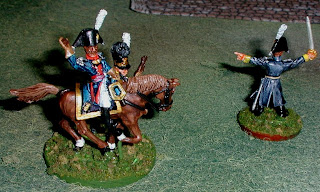 Once again, very attractive figures!  The best on line source (well, best source of any kind) I've found for Baden uniforms are the detailed plates at Histofig. 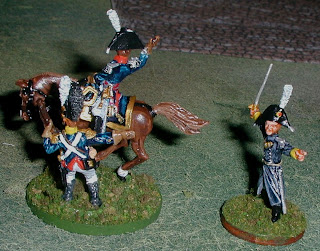 One last view of the three officers. It really is not easy to get good information about these uniforms, and it is made worse by the fact that Baden uniforms underwent quite a bewildering variety of changes between 1805 and 1814. The Hourtellle book, Wagram: The Apogee of the Empire has some nice plates of Baden troops and standards on pages 81 and 82. There is an illustration and some text of a Baden foot soldier and Hussar in Preben Kannik's "Military Uniforms of the World in Color", published by Macmillan way back in 1968, and of course there is also some information in Knoetel's Handbuch der Uniformkunde (this one book, then available only in German, was half of why I learned the language back in college, LOL) but amazingly not a single plate devoted to the infantry uniforms of 1809 (many of 1802, of all things, and some of 1814!). Im suspect more than a bit of  German nationalism in those selections, almost all of the plates depicting Baden troops during the time they were opposed to France instead of allied to it. Ah well, not like we're immune from those kinds of biases ourselves, eh? There are good plates of the Light Dragoons in 1809 and Hussars in 1812 in Knoetel, at least.

At present I don't have any Baden Cavalry or artillery, although I'm seriously considering getting some Front Rank Bavarian Chevau-Legers and Foot Artillery Crew to paint as Baden Light Dragoons and Artillery respectively.

Baden Light Dragoons:  wore Medium blue coats and pants with scarlet collar, cuffs, lapels and turnbacks; white metal buttons. Raupenhelm with black crest, white plume, white metal fittings. Trousers medium blue with double scarlet stripes down the outside seam. White aigrette cords on the right shoulder, white belts (all per illustration in Knotel). That would be quite a distinctive unit!

This concludes our study of the Baden contingent of 1809 - at least until or unless I buy and paint those Light Dragoons and an Artillery Battery! I hope this post inspires some of the rest of you to add a contingent of Badeners to your collection. Unlike previous years, these men gave a good combat performance in 1809, especially the Artillery, Jagers, and Light Dragoons. The infantry was very heavily engaged in the bitter fighting at Aspern, especially on the first day.

ADD:
A good thread on TMP today (May 2, 2014) re: the Army of Baden with many uniform illustrations:

And I have added another post on the Baden Line Infantry (February 25, 2016) using Murawski figures, and the excellent Rawkins e-book on nthe army of Baden: