In my recent posts, I've covered units that are a bit on the obscure side, the Austrian Landwehr and Volunteers, and the Army of Baden. This post concerns the single most commonly seen unit of the Napoleonic Wars, French Line Infantry Regiments (or Infanterie d' Ligne). If you're going to play wargames in the Napoleonic era, there's certainly no way to avoid these guys; indeed, you'll probably have to paint some of them... maybe a lot of them, LOL! First a little background that the Grognards among you can probably skip.

Organization of the French Line Infantry, 1809

What we wargamers tend to think of as the standard organization of French Line infantry regiments was in fact officially set fairly late in the Napoleonic wars, by the decree of 18 February, 1808. This established the organization of a Regiment d' Ligne as having 4 active battalions (or battalions de guerre) of six companies each, and one depot battalion of 4 companies. As the wars progressed, Napoleon more often added additional battalions to existing regiments than created new units altogether - thus some regiments eventually reached as many as 7 combat battalions. Napoleon could be famously thrifty, and this was probably to save money on the expensive regimental staffs!
Each combat battalion had a company of Grenadiers, the original elite troops of the battalion, and usually composed of of the most veteran and courageous soldiers of the battalion. Even the French infantry units of the Revolution included grenadier companies, egalite be damned, at least when it came to the army! The name originally came from the 18th century troops who were hand picked to hurl early versions of grenades, essentially gunpowder filled metal spheres with a fuse that had to be lit before it was thrown. By the Napoleonic wars, grenades were almost exclusively limited to siege and rarely naval usages, but the name (and indeed the grenade emblem itself) stuck as a mark of the elite soldier. The Grenadiers were distinguished by red epaulets, red plumes, red grenade emblems on the turnbacks of their coats (and anywhere else they could get away with), and often red cords and/or bands on their shakos. A few units still clung to their bearskin hats, but by 1809 there were relatively few line grenadiers still so equipped.
Introduced officially by the decree of 20 September 1804, the second elite company of a Line combat battalion were the Voltigeurs (literally, "vaulters"!). These men were intended to be particularly adept as skirmishers, and thus were selected from the smaller, more nimble (and often more independent as well) soldiers of the battalion. They were also supposed to be more veteran and courageous than their run of the mill comrades, and might otherwise have belonged to the Grenadiers aside from their stature. They were distinguished by yellow (or chamois/buff) collars on their jackets, yellow hunting horn emblems on the turnbacks of their jackets, and yellow (and/or green and/or red in various combinations) epaulets and plumes, and again often yellow (or green) cords and/or bands on their shakos.
The remaining 4 companies of the battalion were the center or Fusilier companies. Their turnbacks were ornamented with a variety of emblems over the years, including red diamonds or hearts, dark blue stars, regimental numbers, and crowned "N"s. Their shako cords were generally white when worn, and colored shako bands were not used. The color of the pom-poms on the shakos of the Fusiliers varied by the company; dark green, sky blue, aurore, and violet for the 1st through 4th companies respectively. These fantasins made up the bulk of the Line infantry, and thus the Army as a whole.
Each company, at least theoreticaly, had 121 privates, and was commanded by a Captain, and also included a lieutenant, an sous-lieutenant (2nd Lt. in American parlance), a sergeant-major, four sergeants, 8 corporals, a caporal-fourrier, and two drummers, thus 140 men in all. The battalion was commanded by a chef de battalion, the equivalent of a major in modern US terms. Included within thew totals of each Grenadier company were four sapeurs (pioneers).
The regimental headquarters included the Colonel of the regiment, a Major (equivalent to a Lt. Colonel in modern US terms), four chefs de battalion, five adjuntants, five assistants, ten sergeant-majors, an Eagle bearer (Porte-Aigle) and two escorts (once the Eagles were withdrawn from the individual battalions as originally issued in 1804, but now restricted to one per Regiment),  a sapper corporal, a tambour major  and a tambour-caporal (Drum-Major and drum corporal), a bandmaster and seven musicians (often more if the Colonel could afford to pay them!), four craftsmen, a quartermaster, a paymaster, and finally a surgeon major and his four assistants. Including the depot battalion, the theoretical full strength of an 1809 French Regiment d' Ligne was thus some 3,970 officers and men. Needless to say, such totals were seldom if ever achieved in reality, especially once an active campaign was under way! 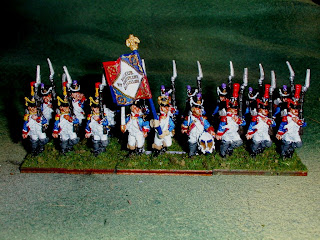 This fine looking unit is the 17e Regiment d' Ligne, belonging for most of this period (as with many of my other French infantry units) to Marshal Davout's Corps. All the troops in this post are the marvelous and quite economical 25/28mm Sash and Saber figures. In 1809, deviations from the regulations were quite common, especially for the Tetes de Colonne ("heads of column), namely the drummers, musicians, and sappers, and standard bearer and escorts. The musicians and Drum Major in particular were often uniformed (at the Colonel's expense) in all manner of highly non-regulation styles and in colors that would make a peacock feel rather plain and ordinary! In this unit, the drummer has dark red lapels on his jacket as a whim of the Colonel. 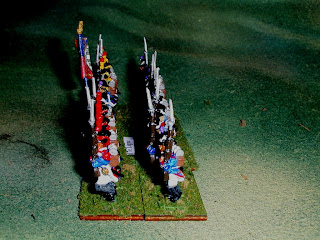 A side view of the impeccable 17e Ligne. The Sash and Saber figures are a bit on the smaller side of modern "25's", but very nicely sculpted and cast. It surprises me that they appear so rarely in pictures of wargamer's collections. Sadly (for me at least!), their 40mm ranges have been so successful that they have added only very slowly to their 28mm ranges. Like Napoleon himself, I'm "thrifty"with regard to my Regiments; all of these figures were bought a few years ago when they had a 50% off sale - that made these great figures just about a dollar each. They repeated the offer again in June/July of 2010, and what do you think I did then?  Darn right - I snapped up more of them. Perhaps I'll paint them as some of the Regiments Etranger (Foreign Regiments) of the French Army! 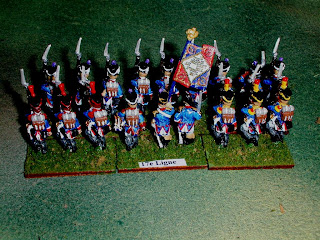 Here we see the 17e Ligne once again, perhaps vulnerable to a Manouvre sur les Derierres, eh? Note that the Voltigeurs of this unit wear red crescents on their yellow epaulets, and have plumes that are yellow topped red. This is a less common but not rare variant. 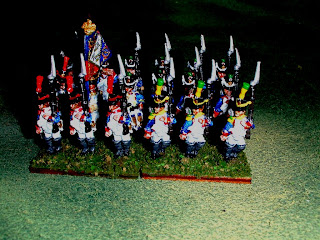 These Sash and Saber figures represent the 30e Ligne, usually found brigaded with the 17e as part of Morand's 1st Division of the 3rd Corps. Here the Voltigeurs have green tips to their yellow plumes, and green crescents on their yellow epaulets, a more common variant. 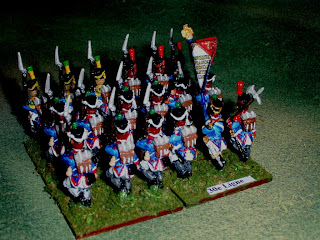 The 30e Ligne again, seen from the rear; note the Eagle escort on the command stand, bearing a halberd! These could bear a long, triangular banner, red for the 2nd Porte-Aigle, white for the 3rd. Now how did I miss those?  I'll have to go back and add them to these guys! Even late in the period, the Eagle bearers in particular could often be found wearing bearskins, and even later copper helmets not unlike the Genie of the Guard. In addition to defending the Eagle (and its attached standard, considered of very secondary importance), they would take up the Eagle if the 1st Eagle Bearer were placed hors de combat. 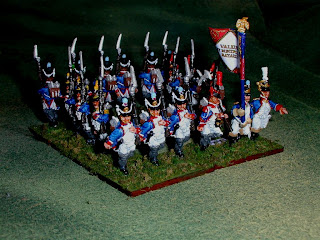 This is the  40e Ligne, formed up in Square, perhaps anticipating the charge of some Austrian Cuirassiers? 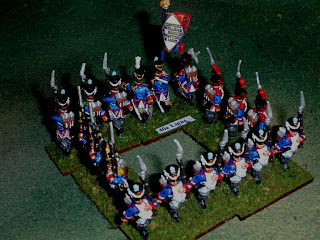 Another view of the 40e Ligne; the white plume on the officer's shako indicates a Regimental level officer. All officers had gold cords on the shako (when worn), and gold bands on the shako as well, the configuration of the bands as well as the various gold epaulet configurations denoting rank. The plumes for the officers were later codified between 1810 and 1813 to be White for the Colonel only, Red over White for the Major, whilst Chefs de battalion had all red plumes. Company level officers had pom poms in the company color (with gold plume holders for captains, and no holders for the lowly lieutenants!). 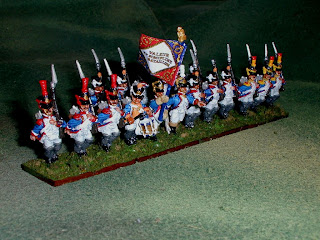 The final unit of this series id the 88e Ligne. If you look carefully, you'll see that the lapels of the drummer of this regiment has aurore lapels, collar, and cufffs as another whim of the Colonel. Aurore, "a color unique to France" is sometimes described as golden yellow with a hint of Rose Pink, or as a light orange/tangerine hue. The introduction of the green coats and the Imperial Livery for musicians in 1812 gradually put an end to these expensive extravgances. By then the wearing of plumes and cords on the shakos was suppressed (with only partial success) as well. Is it any wonder I prefer 1809 for the French units of my wargames army? The brass drums with dark blue bands were regulation, and this one was pretty widely observed. Tricolor drum bands (red-white-blue) were a common variation during the Republic and early Empire, but 1809 that, along with the earlier Tricolor plumes worn by some officers, would rarely be seen. 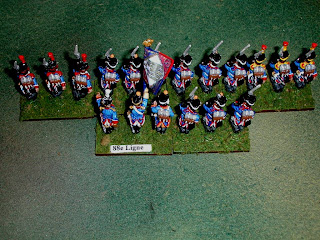 Another shot of the 88e Ligne. As for NCO's, their rank was chiefly indicated by stripes on the forearm of the jacket - two orange stripes for corporals, one yellow stripe on a red background for sergeants, and two for sergeant-majors. In addition, length of service chevrons were worn on the upper sleeves of the jacket by any privates and NCO's entitled to them - one for every 10 years of service! 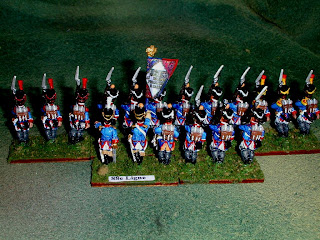 I final shot of the 88e Ligne... and no, I didn't paint the various decorative emblems on the turnbacks, slacker that I am!  Maybe in 54mm.

All four of these units were painted as part of the Fifth Division of my French Napoleonic army, as part of the 2009/1809 project. A note on my Wargames organization. Each of my Infantry units ordinarily has six stands of 3 figures each. This works out perfectly for the French, with one stand being Grenadiers, one Voltiguers, and the other 4 stands being Fusiliers. One of the Fusilier stands is the Command stand, and typically has an officer, standard bearer, and a drummer. I call my units Regiments. Each of my Infantry Divisions has 4 Regiments of Ligne and 1 Regiment of Legere (Light Infantry). Within a Division, all the units have the same (or very similar) poses and are from the same manufacturer. If you were paying extra close attention,you might notice that the pop poms on the fusilier shakos of a given regiment are all the same color, instead of company color (obviously, I could shuffle them up to have each company with the right colored pom pom. The reason for this is purely practical - I use the pom-pom color as a way to distinguish the various Regiments within the Division. An alternative way to do this might be to use the color of the pants; although white was regulation, troops wore whatever they could find once the offial issue wore out... grey, brown (especially in Spain), buff and even dark blue pants were commonly seen.

Well, I hope that all wasn't too boring; I'll gradually inflict the rest of my many French Line Regiments on you, the readers, but having covered all the background detail in this post, those should be mostly pictures and not as much blather!
Posted by Gonsalvo at 10:42 PM