Part of the problem confronting the real Kaiser Francis I of the Austrian Empire (ex-Francis II of the now defunct Holy Roman Empire) was that the Hapsburg territories were composed of a hodgepodge of different Kingdoms, Duchies, and what not (hence the complex arms seen overlying the double eagle on Austrian standards), many with their own laws, privileges, etc. Such was the case with Hungary. The Kaiser asked the Hungarian legislature, or Diet, to approve the creation of a 50,000 strong Landwehr in Hungary. They refused, but the 1808 Diet approved the call out of 60,000 Insurrection troops for the next 3 years. Hollins states that about 21,000 Infantry in 20 units, most of 6 companies, were raised. The Cavalry of the Insurrection, mostly from the nobility, numbered some 18 regiments averaging about 1,000 men each, usually of six squadrons.

I wasn't really planning on raising any Hungarian Insurrectio troops. Honest! Indeed, while all the preceding troops were painted in 2008 and 2009, these guys were just done the end of 2010. I actually ran the battle of Raab at a small convention (Ellis-Con in Danielson, CT) in late 2009, which is where these troops would have been most useful, as that battle pretty much ended the Insurrectio as an effective force. Then I started looking at the picture in Hollins' book, and, well, these guys were just too cool not to add to my already almost 800 figure strong Austrian army. Sold on the fool idea, I looked for a manufacturer who actually made their unique hussar style uniform. No luck, at least in 25/28mm... and did I really want to spend up to $3 per figure for troops whose moment in the sun (or shadow, depending upon one's view point) was very brief? Probably not! Then it hit me - I had these old Minifigs Hungarian Infantry in Shako which I had painted as 1813 Landwehr in the dark grey coats and pants with facing colors of the regiment they were assigned to as 3rd battalions. I never really cared much for them and was hard pressed to even think of the last time I'd used them. 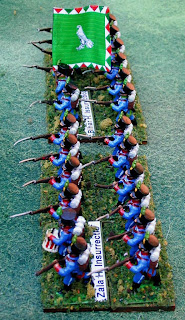 Hah! These neglected soldiers would be reborn as Hungarian Insurrectio!  True, the uniform wouldn't be exactly right, but close enough. The Insurrectio did wear the shako, although not exactly the "double-billed" version of the Line - and the coats didn't have tails. Eh!  I bet the "regulation" uniform was pretty loosely adhered to at best anyway. Best of all the only cost would be my time to repaint them (I'm a cheap bugger, I am). Their uniform consisted of a medium to dark blue Hussar style jacket, with district specific facing colors on the collars and cuffs for the infantry (and for the fabric of the Shako for the Cavalry), with lots of light blue piping, lace across the chest, Hungarian knots, barrel sashes, etc. Interestingly, the leather work was to be natural "red" leather. The first 2 units shown are the Zala and Bihar insurrection Infantry. 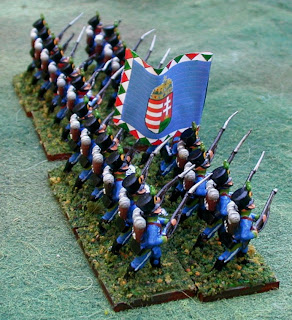 The Zala, being from the district Below the Danube (or Trans-Danube) wear red facings, while the boys from Bihar wear grass-green facings suitable to units from the district Below the Theiss (Trans-Theiss). Hollins gives basic descriptions of several Insurrectio flags; this one is speculative, and has the Arms of the Kingdom of Hungary on one side, and the arms of the local district (in this case a falcon on a green field) on the opposite. Some flags are noted to have "flames" on the borders similar to the Line standards (and also, as we have seen, on the 1/EHK Legion and 1/Styrian Landwehr). As this unit would have the only flag for all of my Insurrectio, I chose the speculative red, green and white flames in the colors of the future Hungarian flag, which after all derive themselves from the original Arms of the Kingdom itself. Some flags a few decades later in the 19th century used this pattern. In any event, I think the effect is quite striking.

These next three pictures are of the other 2 units of Isurrectio I "paint-converted", the Pest and Gomor Insurrectio Infantry (no, they didn't have a Soddom battalion. Humpf!).  Note the black/yellow barrel sashes on the officers, as well as the shako ornamentation. 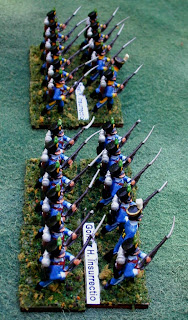 The Gomor unit has light blue facings, being from the district Above the Theiss (Cis-Theiss), while the men from Pest have the bright yellow facings of units raised Above the Danube (Cis-Danube).

This last picture shows the light blue lace on the chest, red-brown leather work, and brass buttons off quite nicely. The next time one of your buddies ask why you'd want to build an Austrian Army (they're so... boring!), throw a unit  of these guys on the table! Quite a change from the glare of all that Austrian white, eh? Of course, they'll probably retreat before long, but they will look so very dapper in the doing! Oh, I wasn't crazy enough to do Insurrectio Cavalry, but the uniform is basically the same as the infantry, and any Austrian Hussar figure would do (supposedly they wore the Pelisse, too - black fur on that). The only change is that the Shakos were in the District Color, Black replacing Yellow for the District above the Danube - Boo, hiss! Yellow Shakos would be... way cool!  OK, OK, I'll calm down and take my medicine now.
There was also a Croatian Insurrectio, and no I'm not planning on raising any of them, either. Per Hollins, the Sabor, or Croatian Diet, called out the Insurrection as well, raising 10 battalions and 2 hussar regiments, the infantry wearing a dark brown, laced Croatian jacket, light blue waistcoats, Croatian cut trousers in light blue with light blue knots, black shakos and red/natural leather work. The Hussars wore uniforms like the Line, with the Personal Regiment having madder red shakos, light blue dolman, pelisse, and pants with white buttons whilst the Banderial regiment wore black shakos, dark blue pelisse, dolman, and pants with yellow/black cords on the shako and braiding on the dolman, pelisse, and knots on the pants.

Finally, Siebenburg (aka Transylvania - Bleah!) called out is own insurection of about 7,000 Infantry in four regiments plus a Hussar Regiment of about 1500 men. Even Hollins gives minimal information as to their uniforms!

So, my friends, this concludes the Landwehr Collection portion of the blog. If you have any interest in the subject you really must buy Dave Hollins' excellent Osprey on the subject, Men-at-Arms #299, Austrian Auxiliary Troops, 1792 -1816. In addition to covering all the units we've talked about, it also covers the Grenz, and irregular troops of the other campaigns as well. Unfortunately, it is out of print, but maybe Osprey could be persuaded to reissue it?

I'll probably slow down a bit in posting for a while, as I really do need to get back to work on finishing the publication that the blog takes its name from, Blunders on the Danube, 1809, a scenario book for the Field of Battle rules by Brent Oman and Piquet. I do plan to post more units, as well as pictures and descriptions related to a number of the 1809 battles we ran at Historicon 2009 and/or playtested for the book, and other things not necessarily 1809 or even Napoleonic. Auf Wiedersehen!
Posted by Gonsalvo at 8:01 PM