OK, so like I said in my first post on the subject of French Line Infantry, you can never have too much French Ligne if you're a Napoleonic wargamer!  This batch are the most recently painted of all my French Line, and represent the units of  Claparede and Clausel's Divisions under Marmont at the end of the 1809 campaign . All are Old Glory figures in overcoats - I think the pose is Advancing. The five units were made up of 1 bag each of Center (Fusilier) companies (30), Elites (30), Command (20) and "Energetic French" (15). 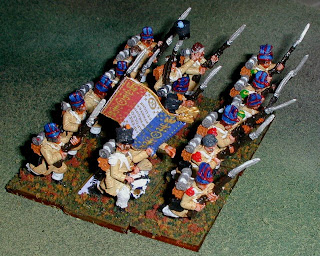 The first unit is the 5e Ligne. The "regulation" overcoat was tan, the shade obviously likely to vary widely. This unit is distinguished by a rather light colored coat, and the majority of the figures wear the "bonet de police", or fatigue hat. 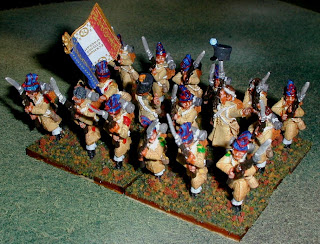 Unlike most of my units, these guys have 1812 pattern standards based upon the Tricolor; it just seemed fitting for this more rag-tag bunch. Wearing overcoats, they can easily double as militia or National Guards if need be. 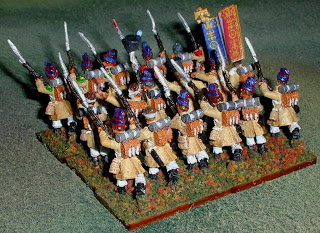 Rear view; with the fatigue "stocking caps" and coats, only the epaulets distinguish the elite companies of this regiment! 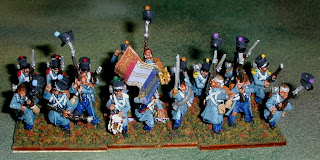 So *this* unit is actually Legere regiment, the 8e. How can one tell, you ask? Well, even though the coat covers most of their uniform, they have dark blue pants, of course!  Hmm, not impressed, eh?  Well, that's part of why I chose the somewhat non-regulation light blue/"steel grey" overcoats for this unit, so it would easily stand out from the rest of the Division! 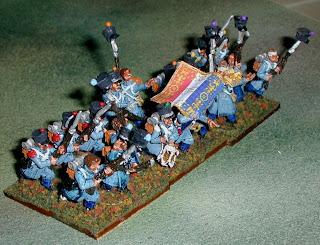 The majority of the figures in this regiment came from the "Energetic French" pack. They *do* look rather energetic, don't they? 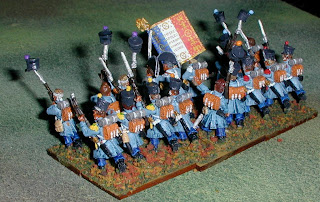 Rear view of the 8e Legere; I like to use officers in Bicorn for my Legere units whenever possible. Don't ask me why, I just find they fit the feel of these Light Infantry units better. 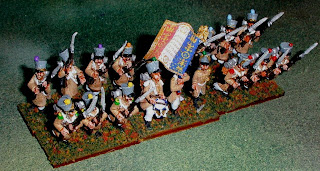 Back to the Ligne regiments; this one is the 23e Ligne. The coats on this unit are a somewhat darker shade of tan than that of the 5e.  And yes, if you look closely, I managed to glue the flag on upside down, grr! 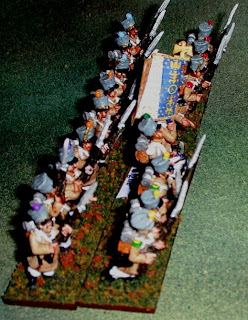 The unit is also distinguished by the light grey "oilskin" shako covers, used to protect the headgear in foul weather.  Sometimes regimental numbers or designs were painted onto these covers. 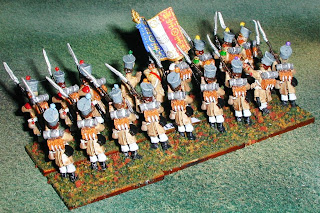 In this rear view one might note that unlike my previously shown Ligne units, these troops in overcoats have the correct pom-pom colors for each individual company; that's because I'm already using the coat and shako cover colors to differentiate the units, so I don't need to fall back on the expediency of the pom-pom colors. 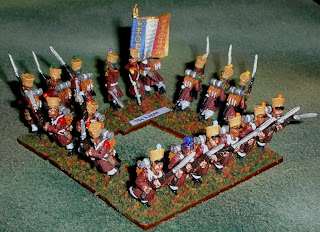 This next unit is the 79e Ligne. It has formed up in square, perhaps wary of nearby Cossacks? They have much darker, red-brown overcoats... 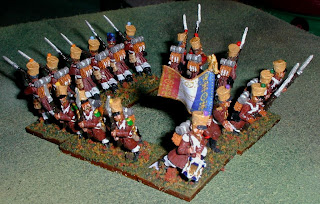 and golden tan shako covers. No mistaking them for any of the previous units! Flags were downloaded from Napflag.org 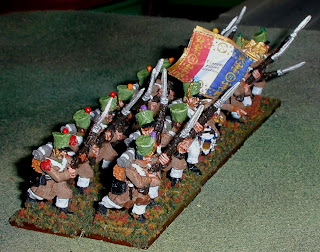 The last unit of the Division is the 81e Ligne; they have light brown coats and sickly green shako covers, for a somewhat different look. I think these Old Glory figures are very effective, and they were easy to paint/stain. Can't beat the price, either! 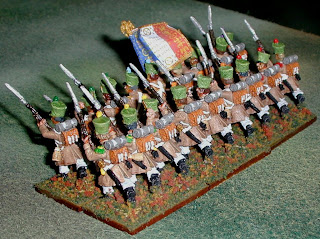 All of these coat and shako cover colors have been recorded, although not necessarily for these units or in these exact combinations. Of course, reality would likely be a much more jumbled assortment of colors for both. Still, even for my campaign uniforms, I like a certain amount of uniformity to facilitate easy identification of the individual units on the tabletop!