Although I already owned a substantial Austrian army for 1809 (mostly Minifigs from 30 years back), one of the things the 1809 project required a was a substantial number of Landwehr, Volunteer, Insurrectio, and other non regulation troop types. I had quite a lot of fun with these. The flags for the units were based on descriptions and/or provincial/city coats of arms. I've probably been a bit bold with the designs, giving some of them an almost Renaissance feel, but I like the resultant effect. 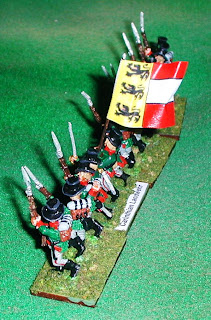 These Carinthian Landwehr wear the "regulation" dark green coats of the Inner Austrian Landwehr, with the red facings that indicate Carinthia (Karniten). The flag bears the coat of arms of Carinthia on one side...
and the Imperial Double Eagle on the other. Presumably, retired old model Ordinarfahnen were used as the basis for many Landwehr flags.

Next is the Landwehr of Carniola; once again they wear the dark green coats of Inner Austrian Landwehr, but this time with the light blue facings of Carniola (Krain). 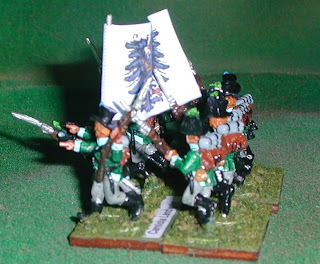 Although a bit obscured by the fold in the flag, the emblem is the Blue Eagle of Krain.


** update June 28, 2012: see comment by AK-8 below, who actually resides in Carniola, which includes a nice link to graphic of the heraldic Blue Eagle that can be used to make your own flag - prior to the 1840's, the background should be yellow ("or", in heraldic terms) rather than white, so this flag should really have the Eagle on a yellow field instead of a white one. ** 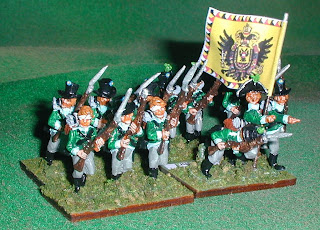 Next we have one of the 4 Landwehr battalions raised in Salzburg, City of Mozart. The Salzburg Landwehr were noted to be particularly ill equipped, hence only the "Land" or 1st/staff company is wearing the regulation dark green Inner Austrian Landwehr coats, the rest of the men are in grey peasant smocks, although both have the Yellow facings assigned to Salzburg. ﻿ 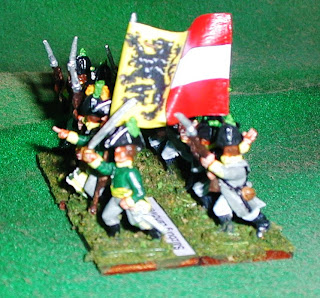 Not a good photo, but again the flag bears the coat of arms appropriate to the unit, in this case those of the city of Salzburg. These guys fought like tigers in their first wargames battle, the initial playtest of Aspen-Essling 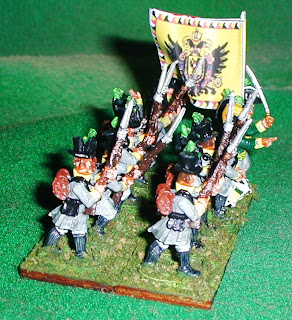 Concluding the Inner Austrian segment of our Landwehr Collection, here is the 1st battalion, Styrian Landwehr. The image here is of a local Saint, which was usual for Stryian flags. 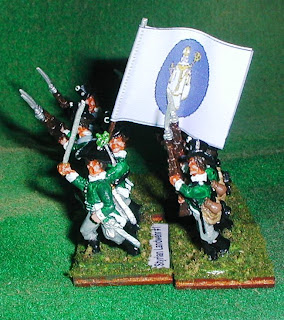 The Styrians wear white facings on their dark green Inner Austrian coats. Again not a good picture, but this side of the flag has the heraldic White Panther of Styria; the border has dark green flames reminiscent of the Line standards. Can't you just hear Inspector Klussnach saying "I am Styrian, NOT Austrian!" 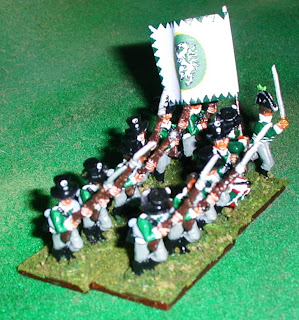 All of these 28mm figures are by Old Glory. Next time - Upper and Lower Austrian Landwehr.
Posted by Gonsalvo at 9:04 PM