1813 Campaign with Snappy Nappy: The Scenario

With HAVOC behind me, I spent about 8 hours today finalizing the maps and scenario framework for our Snappy Nappy "Campaign in a Day", to be played at the Time Machine in Manchester, CT in less than 2 weeks ( Saturday, April 20, 2013). Setup will start at 10AM, play should start sometime after 11 AM, and we should conclude by 5PM or so. The game will be based upon the situation at the end of the Armistice in mid August, 1813. I consulted numerous books in preparing the maps and overall situation, but have freely and un-apologetically fudged both as needed to accommodate the physical tables and not entirely settled number of participants. These sources included Nafziger's very detailed book, Napoleon at Dresden: The Battles of August,1813; F Lorraine Petre's Napoleon's Last campaign in Germany - 1813, David Chandler's The Campaigns of Napoleon, and Peter Hofschroer's Osprey Campaign title, Leipzig 1813: The Battle of the Nations.

I will, hopefully, be using eight 6 x 4 foot tables, plus one card table approximately 32" square, and a Camp Table of mine (30" x 72"). I have the layout of the tables to cover the Theater of War all set out now, but I won't be sharing it here until after the event, in order to increase the Fog of War for the players. I also decided to be a lot less specific with the tactical terrain for the tables themselves, settling for some general descriptive guidelines to be used in setting up each table. In part, that is because the Scale for thuis game is much grander; a foot on the tabletop will equal almost 10 miles. meaning an inch is almost a mile strategically. O necessity, this will introduce some distortion between the tactical and strategic scales, but with the short ranges and move distances in Snappy Nappy, it should effect things too much. It also means that a MOVE in game terms will equate to about half a day's marching distance. 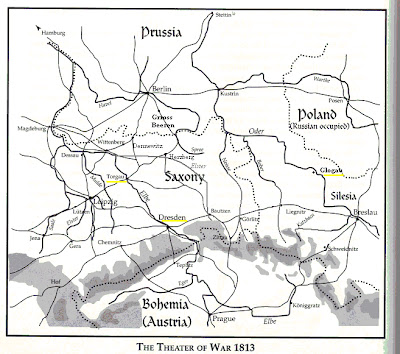 This Player's Map is edited from that in Nafziger's book, and has been modified by me for the purpose of the campaign... I have added a few more towns, moved one or two, and added or modified the course of some rivers. Take away - don't refer to *this* version for anything but the purposes of the Campaign in a Day event! Cities underlined in yellow or Fortresses, all French held and Garrisoned (oops, forgot to underline Witenberg in yellow as well!)

The overall situation in August, 1813 historically was as follows:

Schwarzenberg - commanding the 230, 000 Army of Bohemia (mostly Austrians with some Prussians and Russians) - upper Elbe

Oudinot and Ney - 120,000 men including 3 Inf Corps and 1 Cavalry Corps; includes French plus Italians, Poles, and Saxons (as well as other Rhine confederation troop)s - between the Bober and Elster rivers.

Garrisons in the Elbe fortresses of Dresden, Wittenberg, Torgau, plus Glogau; forward positions at Bautzen and Gorlitz.


The deployment of player forces will thus be similar/roughly proportionate to the above; we have players supplying troops from Russia, Prussia  Austria, and Sweden on the Allied side, plus French, Poles, Danes, Italians, Saxons, Bavarians, and possibly Westphalians and other Rhine confederation troops. We have plenty more in our collections for additional visiting players and others unable to "Bring Your Own Corps" of 200 points of 25/28mm figures!

There is still space for additional players if anyone is interested - just contact me by this weekend so I know who to expect and what additional troops to bring.