Picking up the narrative begun in Part 1 and Part 2 of this report, the game was now clearly moving to its climax and resolution. 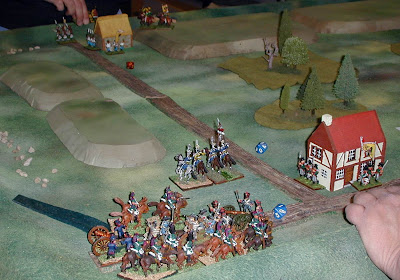 St Cyr's Corps barges onto the "Lonely Mountain" table. There is a unit of Austrian  Landwehr (Militia) garrisoning the nearby village, and another Landwehr unit along with a Uhlan and artillery unit defending the distant village which overlooks the mountain pass that leads to the Bautzen table. 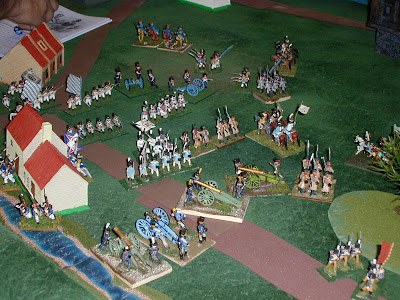 Bernadotte presses on against Oudinot, pushing the Bavarians back towards Leipzig; shortly after this picture, Oudinot concedes that his troops are shattered and must withdraw with all haste to reorganize the remnants. 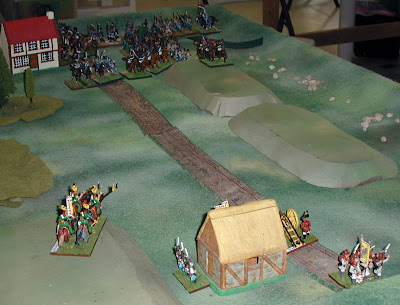 The Austrian defenders guard the pass! 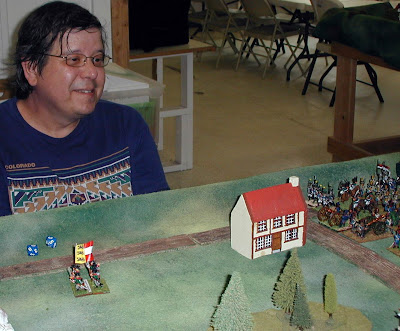 *Finally* able to roll some dice in anger :-), St Cyr's artillery easily forces the militia out of their village; they will later be run down by some French light cavalry, hence the smile on Peter D's face. The rest of his Corps loses little time in pressing on for the pass. 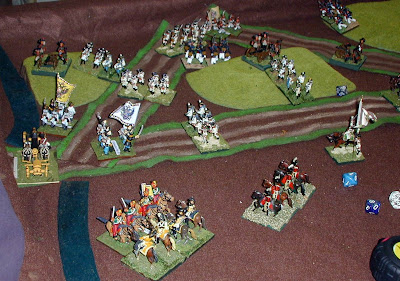 Schwarzenberg's Austrians enlarge their bridgehead on the Bautzen table; the point of the triangle of roads at the top of the picture is the location of the mountain pas that leads to the lonely Mountain table and St Cyr's advancing Corps. 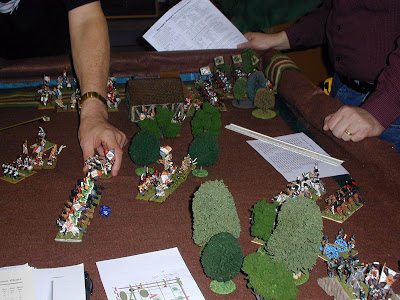 Ney pulls back his Dragoons under heavy pressure from Blucher, who now has infantry and artillery arriving to support his cavalry. 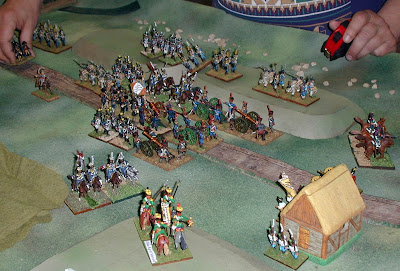 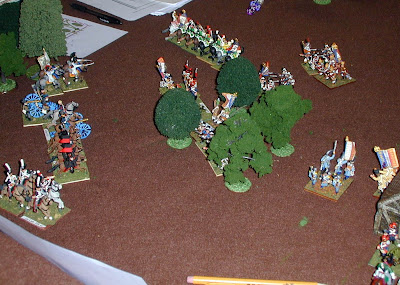 The Prussians continue their advance on the Bautzen table... 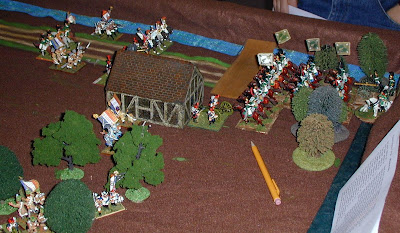 while Sievers' Russian cavalry stands off against Ney's defensive forces. 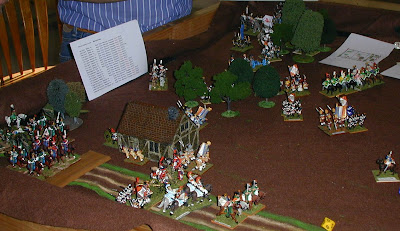 another view of the Northern half of the Bautzen table. 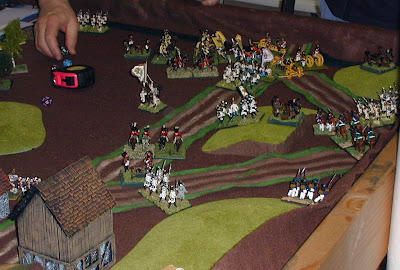 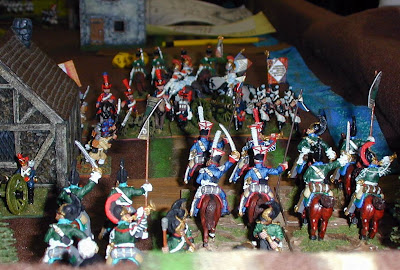 Close up of the cavalry stand-off. 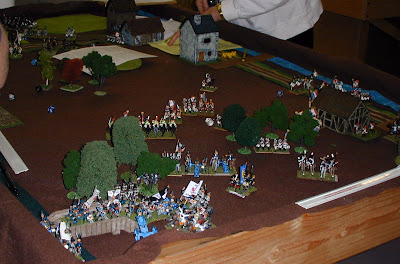 More Prussian infantry pours across the bridge over the river Niesse. 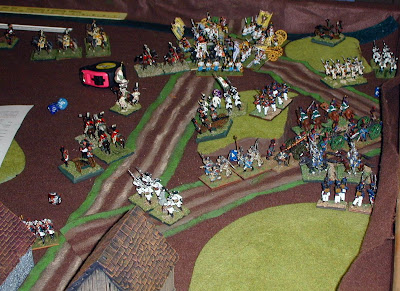 St Cyr's French corps arrives on the Bautzen table, and his troops march away from the enemy, towards Bautzen proper. The Emperor is not amused, with Ney and McDonald both fighting for their lives, but his orders to St Cyr were to "Come to Bautzen Immediately!"  No mention was made of attacking the enemy, etc, so an Imperial Aide de Camp was then dispatched to the Marshal with the instructions to "Attack the Austrians and take over the defense of the southern part of the table ,so that McDonald can shift his forces North to oppose the advancing Prussians". 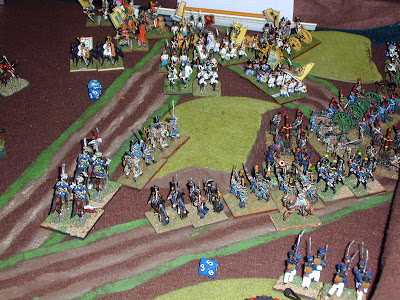 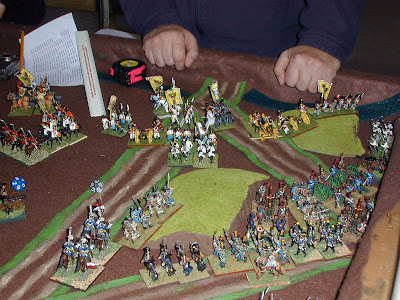 McDonald's Saxon's disengage from the Austrians, and head North to face the Prussians. 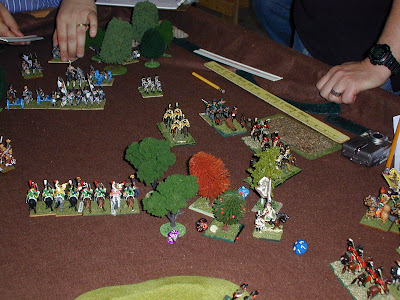 The Prussian Artillery is battering the French of Ney's corps. 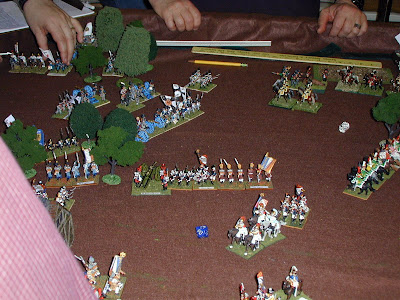 Ney struggles to find troops to make a new defensive line, but the noose is closing... 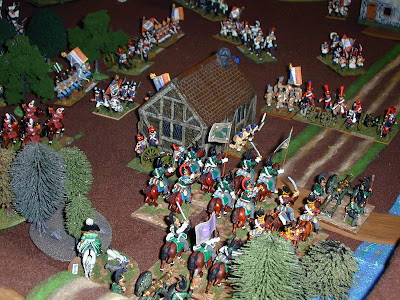 Sievers calls his Horse Artillery to the front. 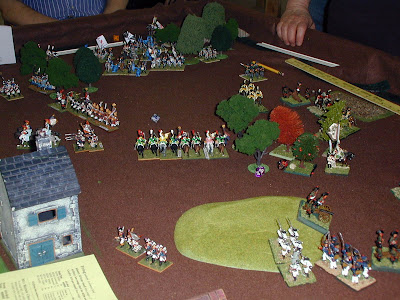 How will they contain Blucher? 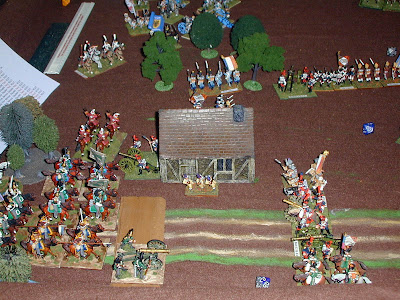 Sievers is still bottled up for now, but Oudinot has been defeated near Leipzig, McDonald's Saxons are severely battered, and Ney's Corps is fatiguing rapidly. We had started play at about 11:30 AM, and had reached our scheduled stopping time of 5 PM. The overall situation seemed clear, and so we called the game a major Allied victory.

1) "A great day's gaming. Having never played SN before, it was tons of fun, and quite challenging as well for my battered Saxon Corps, who at one point were stretched out between 3 tables (garrison to probe). Glorious action indeed, with Gorlitz held valiantly (one conscript unit passed many morale checks; the other, which was clearly disheartened by the loss of both the 1st conscripts and the 12 lb  battery, quickly caved."
Greg (McDonald)

2) "I had a great time. Loved the game, the system, the scenario, battles, and challenges, and particularly meeting Russ and Dan from NJ, truly stellar gamers and gentlemen. Some retrospective thoughts from Napoleon's perspective on how the overall battle progressed: The distraction caused by the early Austrian drive from the South coupled with the Russian cavalry corps pressure from the north had no little influence on Napoleon freezing (and largely keeping inactive) Ney's centrally-located corps at Bautzen. Indeed, the overall concentric inward driving pressure of the four Allied corps more or less had them all engaged pretty much most of the day in either actively driving/destroying French or at least tying them down. In contrast, the better part of two French corps (Ney and Oudinot) were tied up one way or another not seriously engaged with the enemy, leaving the brunt of the fighting falling on the unfortunate shoulders of MacDonald and St. Cyr. Certainly an equation that served to dish up victory to the Allies. Kudos to the Allied command."
James (Ney/Napoleon)

3) Joe's  (Bernadotte) comments were posted to his blog: Fishtales.

4) ...thank you for umpiring! I so rarely get to actually play in a campaign-size Snappy Nappy battle because I'm the one who umpires, so this was a real treat for me!
I loved your remark as Blucher, maneuvering towards Gorlitz. "So THIS is what it is like to play my rules!" Classic!
Kudos for putting me in a 'Uh-oh, what do I do now?' situation.
Right then and there, I was in a classic command dilemma -- no idea what was beyond the enemy-held town of Gorlitz, and no guarantee that the French corp that exited beyond wouldn't be coming back, and yet, taking Gorlitz would take time and trying to cross a river presumably held by troops beyond would be difficult.
I could take the option of moving to the other crossing at Guben, but that was a long way from Gorlitz, I had a limited command radius, and if I was caught twixt and between an enemy counter-offensive, my corp was going to be down to a division by the time I could get back.
My gamble of heading for Guben, meant that Blucher kept up with the cavalry, gradually leaving infantry and artillery behind in a strung-out line. Rolling MCs to move can get nerve-wracking. Many a brigade just sat and watched the grass grow. The photos show this clearly.
Would I make it to Guben before some counterattack came? Would the Guben crossing (on the other table) be defended heavily by the French corp that escaped from Gorlitz?
In the back of your mind, you know, you just know, that if there was a time when the enemy could really put a monkey wrench and entire toolbox into your efforts, they would do so at the worst possible, strung-out, no commander in sight moment.
And that's when it hit me...

Russ (game author, Blucher)
<Incidentally, the record for unit's movement in a SN game is 23 feet, and I believe Peter (St. Cyr) came pretty close to that by the end of the day.>

First, this project was well worth all the time and effort put into it by the players and myself, and I was very pleased with how it all worked out. I have wanted to do a project like this since first reading Russ's articles about it in the old MWAN. The 200 point Corps were probably a bit on the large side, especially if we had had more players. The Infantry Corps typically had about 12 infantry units or about 48,00 infantry men in Snappy Nappy terms. Add the cavalry and artillery and it is close to 60,000 men with 100 - 120 guns. Of course, the presence of substantial numbers of Militia and Conscripts in all of the Corps inflated the numbers somewhat. With more players, somewhat smaller forces for each would probably have been preferable. I also might have increased the Command radii somewhat to allow for the size of the forces, maybe to 18" for the Allies and 24" for the French to allow for the larger commands. Still it worked OK as we did it (which is as written in the rules).

All of the players were great, and many contributed the troops and/or terrain that made it all possible. Peter D. deserves an award for patience and perseverance as St. Cyr!  It was a special treat having Russ and Dan join us from New Jersey. The new gaming space at The Time Machine is awesome, and should get even better with a few additional improvements they hope to make to the space. I just hope that they can support it financially... which  is of course in part up to us to help out as much as we can.

I would definitively do another of these again in the future. Field of Battle remains my favored tactical rules, but Snappy Nappy is ideally suited to this unique and challenging Campaign in a Day approach. It would also work pretty well if (? when, LOL) I am insane enough to consider doing all of Leipzig some year...