Like most miniature wargamers, I have loved history for as long as I can remember. I especially enjoyed learning about the history of Egypt and the Pharaohs when I was younger; indeed, at one point a career in Egyptology might have been a consideration. My original set of Ancient armies didn't include an Egyptian one. The explanation for that is that one of the other guys was going to do the Egyptians, so I left that one to him. Of course, he bought a limited number of figures, never really did anything much with them, and eventually moved of to California. Perhaps about five years ago, I bought a bunch of Old Glory New Kingdom Egyptians. I assembled the chariots  and started to paint some infantry, but I got distracted by other projects (such as the great 1809/2009 anniversary bash) and never completed a single unit.

I hadn't decided about attending HAVOC this year (April 5-7, in Shrewsbury, MA), and really wasn't planning on running a game there this year. However, a month or so ago one of the organizers wrote to me as a former GM and asked if I would consider running a game - it seems that they had had some unexpected GM cancellations, and thus had more openings in their schedule than usual. From past experience, I knew I didn't want to run anything complicated there, and so I decided to run a game using the Sweet Ancient rules. One of the armies set out for those rules in the Egyptians, so I decided to get my Hieroglyphics in gear and paint up my Egyptian troops in a little over a month for the game (there were other armies available if I fall short by too much). Of course, I forgot that we had, perhaps unwisely, committed to start working on the "Patient Centered Medical Home" project in my solo medical practice starting in March, and hadn't counted how much of my free time that would consume.

In any event, I just finished painting the army - about 90 Infantry and 9 chariots. Now, there is something I just love about the look of chariots - nothing quite screams "Sword and Sandal" like these improbable carts of war, eh? They are also very time consuming to paint, between the cart itself, the horses, and the crews. I had hoped to add sand to the bases for a finished look, but the game is in a little over 12 hours now, so that will have to be a post facto embellishment. 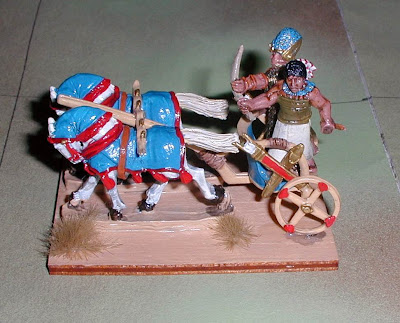 Pharaoh in his Chariot, ready to command the might of Egypt. 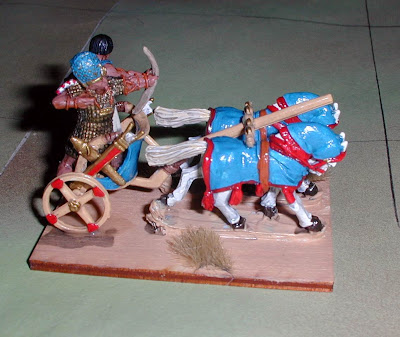 This being late New Kingdom Egypt, he wears armor of bronze scales, along with the traditional blue war helmet. 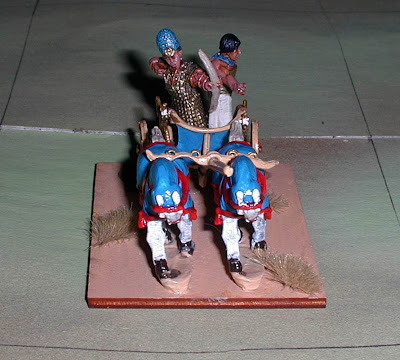 Bow at the ready! 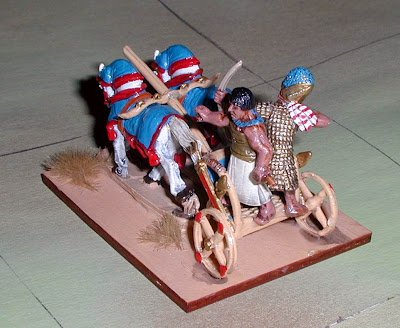 Like most chariot models, the crew just barely fit in the cab. Super glue plus a load of expoxy was necessary to get them to stay in place properly! 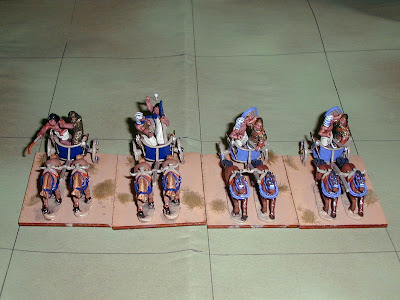 Blue squadron!  I will be using a 4" square grid for the game. 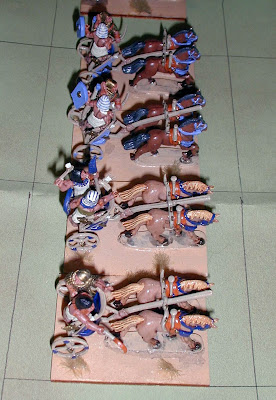 Another view of Blue Squadron. 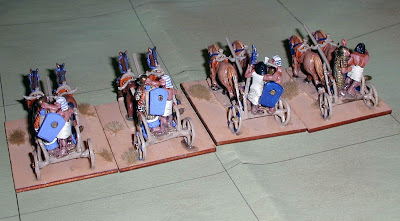 Hopefully the tufts will look more natural once the sand is added to the bases. 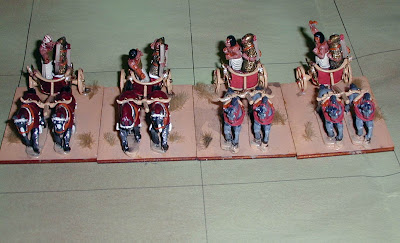 Red squadron is up next. 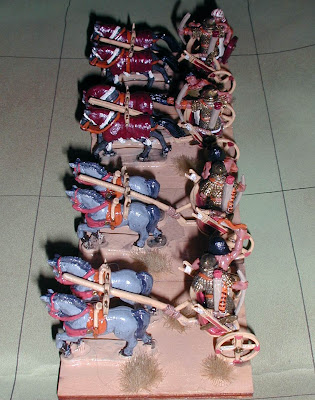 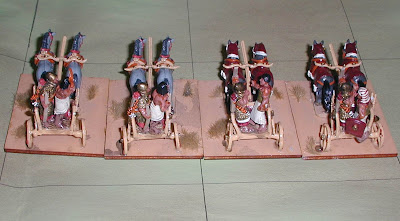 A final, rear view of red squadron; The woven rush floor of the chariot is nicely modeled... and then made invisible by the crew and glue!

Aside from being a mild word play on the famous spiritual, the title of the post also refers to the fact that rolling LOW is good in the Sweet Ancient rules. We will see how they fare in their battlefield debut!

To the glory of Amon-Ra!