I really had been on the fence about attending HAVOC this year for personal reasons, but the organizers wrote to me and some other past GM's looking for additional games to be run, evidently due to some late cancellations. Well, ASK me to run a convention game that way, and... I probably will! From past experience, I knew that the tables at HAVOC are relatively small, and the 4 hour time slots allocated for games are a lot more like 3 1/2 hours as there is only an hour in between games - not much time to set up, run or take down a game of any size.So, the re-discovered Sweet Ancient rules came to mind. They would be easy to set up and take down, wouldn't need a ton of troops (by my standards at least), and the gridded board and relatively simple rules make for quick play.

The only problem was that I really wanted to use an Egyptian army as one of the ones on the table, and as of committing to the game barely a month prior to the event, I didn't *have* and Egyptian army!  As explained in my Chariot post, I had bought the figures for such an Army 5-6 years ago, assembled them, primed them, and painted the dark flesh on some.... and then the project stalled, until last month. ( chariots and about 100 infantry figures later, I just finished them in time, but not enough to terrain the bases with sand as is my eventual plan. Still, I packed up the troops for six different armies, and the necessary supporting materials on Saturday AM, and made it to Shrewsbury, MA in just a little over 2 hours, which is very good time. I got their early enough to make a decent tour of the dealers there (didn't buy anything this time out, though), and chat with Carl out in the parking lot (it was cool but sunny) for about 30 minutes before going in to set up my game as the previous occupant of the table cleared their game off.  I used the heavy brown paper table mats I had made a few years ago, marked with a 4" square grid, which is just a bit small for 25mm figures in units of up to 4 stands of 60mm frontage, especially the cavalry, but it worked OK.

I brought six armies (HAVOC events call for a minimum of six player spots) and had them deploy in reasonably historical match-ups, each on 1/3 of the table's width. Which one of each pair was on each side I determined more or less randomly. As it turned out, these wound up being Egypt-Carthage-Macedonian vs. Assyria-Rome-Mauryan Indian. This allowed a lot of different troop types and armies on the table, and it was they way Charlie and Dave did multi-player games at their home. So, enough background, on to some pictures: 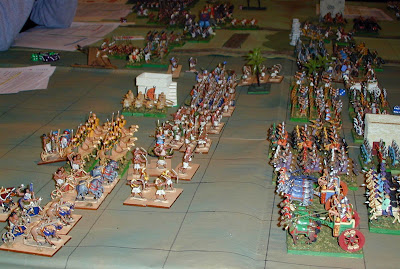 This flank of the table had the newly painted (Old Glory) Egyptians against the (Minifigs - some of their best figures ever) Assyrians. I think the Assyrian player was Angus but I could be wrong, and although I sat next to the Egyptian player much of the game, I could never read his name tag!  I do wish the name tags had the attendees FIRST name in big, bold print; so much better for everyone! Please feel free to correct/update me! 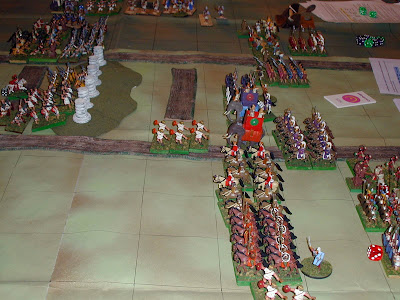 In the center, Jams had the Carthagenians facing off against Carl with the Republican Romans. Ad we didn't have a 5th player, we left the other two armies on the table but didn't use them (I would have been the 6th player in that case). 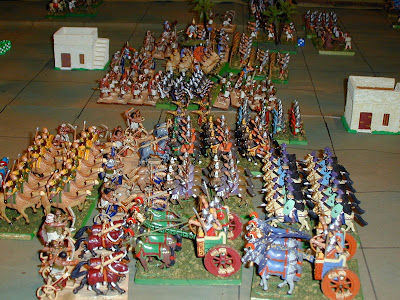 The Egyptian player chose his moment  and then attacked with every thing he had. Prior to that, the armored Assyrians, many of whom have bows, had shredded the lightly armed Egyptian archers quite thoroughly! 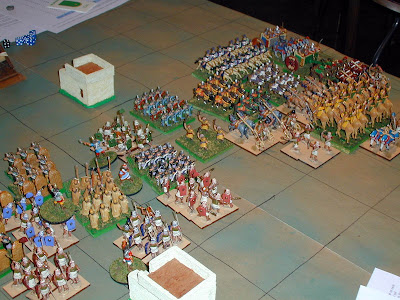 Another view of the grand charge! 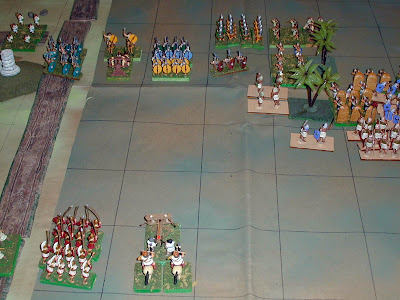 In the center, Carl pushed James back at first, but James was able to save his catapult by a successful "Withdrawal" on the MDI. 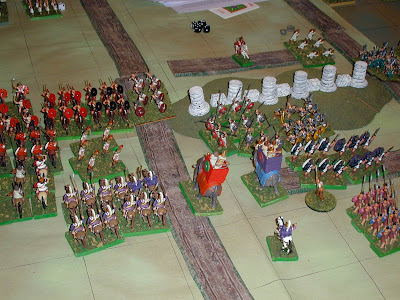 Hey Carl, we just read that the Romans have Pila! Chucking these weapons at a range of no more than 1.5 squares can really soften up the enemy - or disperse his Light Infantry! 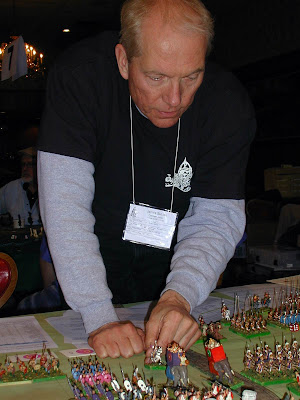 James tries to figure out how to get the Elephants to Charge! 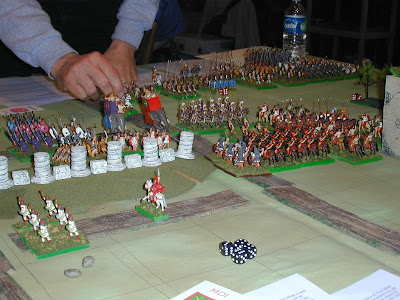 Roman cavalry prepares to charge on the right flank! 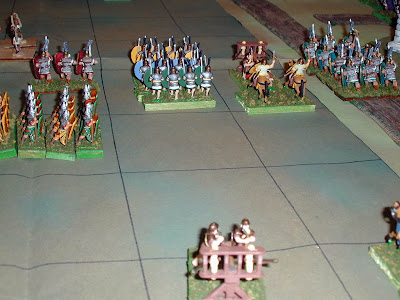 An Egyptian Light Chariot slipped through and ran over a Roman Light catapult... and of course paid the price for the bold move on the next turn (the empty square was their location prior to the melee. 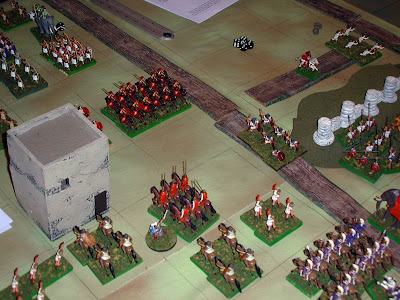 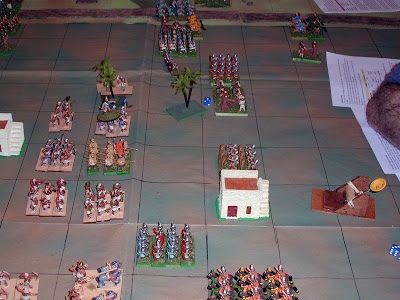 The Egyptians won most of the melees, and really blew a huge whole in the middle of the Asyrian army! 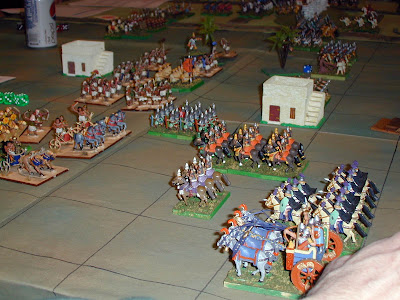 The Assyrian cavalry and Chariots rallied back... 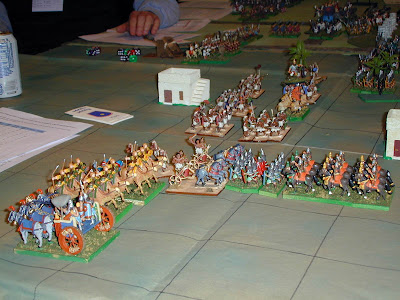 and then launched their own big push! 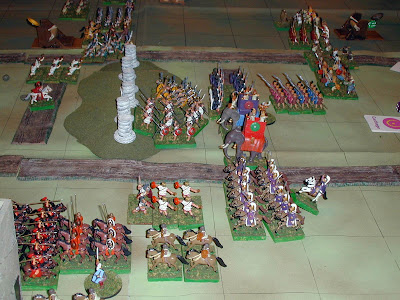 Rome and Carthage continue to grind it out against one another. 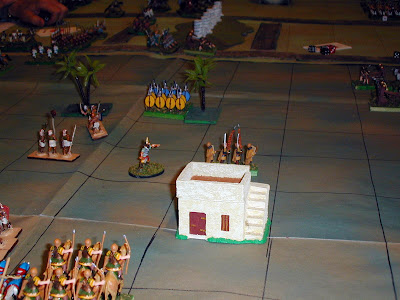 A Roman Legion unit tries to help the shattered Assyrians... but in so doing leaves the battle against Carthage short of much needed troops. Final result was a convincing win by Egypt and Carthage. For once, newly painted troops gave Yeoman's service on the tabletop!

So, how about the rules? Not surprisingly, everyone found the shooting catapults the most fun part of the game. These are capable of considerable accuracy, but it is definitely a learned skill to shoot well with them, and more than a few friendly troops died beneath the hail of plasticene clay discs! The gridded board greatly sped up play by making movement quick and precise, measurement of ranges a snap, and arcs of fire obvious. Charlie Sweet made convincing arguments for the virtues of a gridded table on this basis, and he was certainly right about that. The bow/sling/javelin fire was straightforward and worked fine, although I still find rules where rolling LOW is good unnatural, and would probably change that if I played them regularly The Melee Deployment Indicators are an interesting technique, but most of the players missed rolling dice in melee. I must confess that that was my reaction to the game years ago as well. f course, the fact that I *always* seemed to pull just the wrong one didn't help much!. James would agree, I imagine. :-)

Overall, back 30 years ago I liked the gridded board and the shooting catapults, as well as the relatively small numbers of troops needed for each army, and the grand spectacle of the many troop types and armies, but wanted a bit more granularity, especially for melee. I would say about the same thing today.  Indeed, these factors where what led us to adapt the FGU rules Legion! to the Sweet grid and shooting catapult concepts, a hybrid that I have named "Legio Quaternarius" which we played avidly for almost 20 years. The additional complexity is not great, and less math skills are needed for the Melees as well, LOL!  Perhaps I will run them at Elliscon or HAVOC next year, or even Ross McFarlane's Morschauser inspired rules.