Organization of the Danish Light Infantry

The Danish regular  light infantry consisted of Jager Corps (Jaegerkorps), in which half the men were armed with rifles and the others with sharpshooter muskets, and Sharpshooter Corps (Skarpskyttekorps), in which all the men were armed with sharpshooter muskets. I have conflicting information as to the composition of these units. One source says 80 men per company, with 4 companies of Jagers or sharpshooters, and one of Jager-Grenadiers. Another implies that only certain units had Jager Grenadiers, and gives a battalion strength of roughly 576 men for Jager battalions and 548 for Sharpshooters (and doesn't list the Jutland Jager Corps at all). In any event, second ("reinforcement") battalions were added to all of the units in 1808.

Uniforms of the Danish Light Infantry

In general, these were of the same overall pattern as the Line infantry, previously covered, with different colors substituted. The short jackets were dark green, with black facings on the collars, cuffs, and lapels. all piped in white. White turnbacks at the front of the jackets. Shoulder straps and button col,or varied by the unit, as detailed below.  Pants were either white or grey. All belts were of blackened leather. Hansen shows some light infantry officers wearing dark green pelisses with grey fur, and silver grey lace, and green pants in 1813 - quite classy!  Like the Line infantry, officers wore sashes of crimson striped with yellow.

Headgear was also similar to the Line Infantry. Hats with turned up brims were worn through 1807, with short dark green plumes and dark green cords, white hat bands for most. Officer are shown with bicones with green plumes, or hats similar to the men, again with green plumes and gold cords. Jager Grenadiers wore a headdress again similar to the Line infantry Grenadiers, with a black metal front with a brass banmd on the bottom, a black peak, a green transverse caterpillar crest running from ear to ear, a green plume with a red tip on the left side, and a dark green cloth flamme at the back, with white piping and tassel (the NYPL site has a good picture of this uniform, #27 in the Danish Napoleonic section).

In 1808, officers and men adopted the shako. This again had dark green cords and plumes for the men, dark green plumes and red mixed with yellow cords for the officers. The Jager-Grenadiers now wore a black bearskin with a green plum tipped in red on the left side, and a dark green bag on the back, piped white.

The Kongens Livjaeger Corps was a volunteer light infantry unit raised from upper middle class citizens of Copenhagen in 1801. Initially, only 2 companies of 80 men were raised, but it was increased to 4 companies due to the threat of attack by the British. The companies were increased to 100 men each in 1806. The unit fought with distinction in the defense of Copenhagen in 1807. In 1815, it was the only volunteer unit not disbanded, and was ranked just below the Guards and ahead of the Line troops. The men were armed with rifles, supplied by the King.

The uniform of the Corps was short dark green coat with black collar, cuffs, lapels, and small black frontal turnbacks. Dark grey trousers were worn (dark green for full dress). There was black lace on the jacket and also the pants. Belts were black, and black boots with black tassels were worn. The headdress was rather unique six sided czapska with a dark green wide band around the bottom, green cords, green cockade surmounted by a large green pop-pom on the left side. 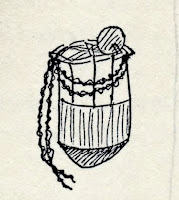 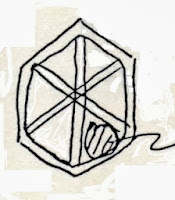 Officers had gold epaulets, and in full dress, gold piping on on the facings, turbacks, and lace. Yellow sashes with red stripes were also worn by the unit's officers, a mark of special distinction for a volunteer unit. Initially the officers wore a sort of Tarleton style helmet with a green fore and aft caterpillar crest and a leopard skin hat band, but in 1806 they switched to a six-sided czapska like the men.A dark green pelisse with black fur, black lace, and brass buttons was also worn as an option.


And now, on to some pictures: 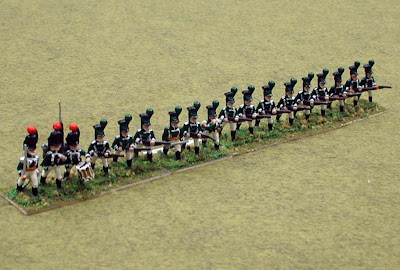 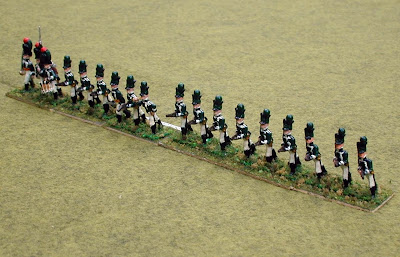 Black facings piped white, silver buttons, white pants. I used the Minifig models for the Livjagers for these units, but strictly speaking the castings for the Line infantry in shako would be correct, just painted in the colors of the Jager uniforms. 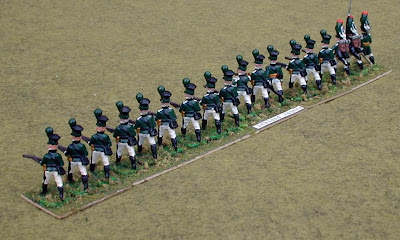 The Jager-Grenadier company is seen on the far right of the line. 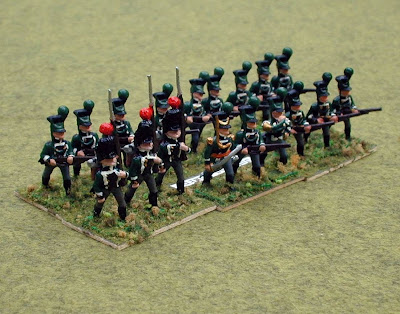 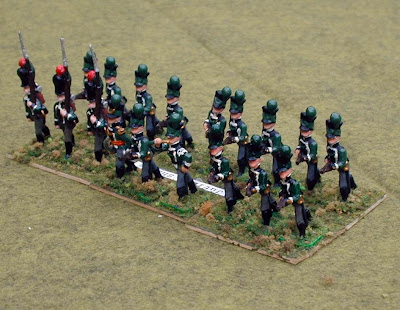 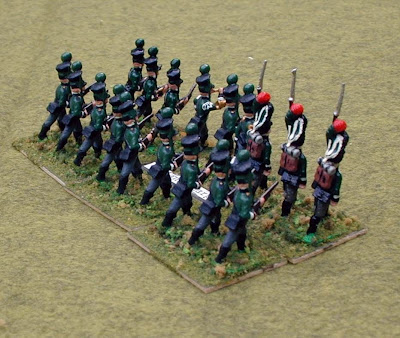 Note the wings on the jacket of the  hornist, and the bag of the Jager-Grenadier's bearskin. 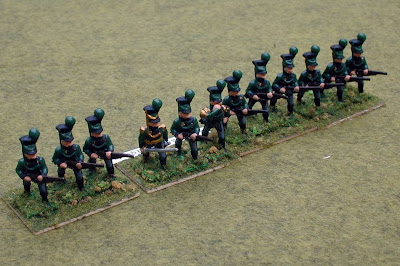 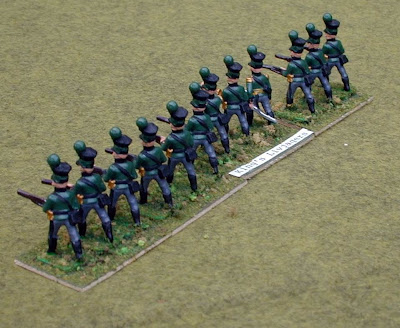 A good view of the unique six-sided "czapska" in this picture. 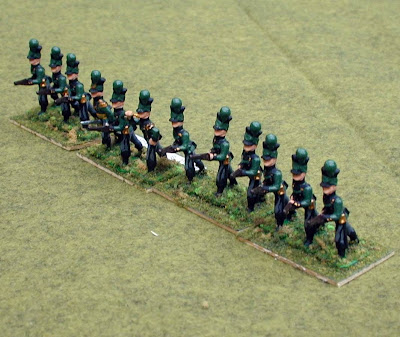 Hornists wear the same uniform as the men, with the addition of black wings with yellow lace and tassel ornamentation. The Livjagers suffered over 25% casualties at the battle of Copenhagen in 1807.

Incidentally, this post marks the 200th post since I began the blog on January 2, 2011. That seems like a lot, at least to me... and then I see Bob Cordery has just passed two THOUSAND posts in about 6 years. Good grief!  :-)

Next time:  The King's Livguard of Foot and the Liv Infantry Regiments.