As I finish up the hordes of space ships I've been painting the past month, I will be entering the home stretch for pre-Historicon painting. After my Montmirail playtest game, I decided to use my full 18-figure units for the French infantry (they will be opposed by Barry's 16 figure units of giant Front Rank figures).That means I actually have to add two units of Old Guard Infantry to my existing 1st Grenadiers a Pied  and 1st Chasseurs a Pied.  I'll also use these new units in my Waterloo game next year. For a variety of reasons, I am using Essex figures (chiefly, they were available at a huge discount at Wargames, Inc. clearance sale of their Essex stock). While I was at it I also decided to add another battery of Old Guard Foot Artillery, also by Essex, and a small contingent of six Gendarmes d' Elite (by Connosieur). When Brigaded with the Grenadiers a Cheval (in the same fashion as the Mamelukes are with the Chasseurs a Cheval), that allows me to field 2 8-figure units of each for the Montmirail game.

All of these new troops wear bearskins (French: Bonnets a Poil, literally "fur caps"). I am looking forward to painting Napoleonics again in June. However, I have some painting decisions to make, for which I am requesting the assistance of you, my gentle readers. I am asking your opinion, in what I am calling...
"Bonnets: a Poll". (Groan, I know - deal with it, LOL!). If you are so inclined, kindly leave your votes in the comments section of this post.


Question #1:
Should Peter paint his new unit of Grenadiers a Pied as the 2nd or 3rd Regiment?

The new Chasseur Regiment will obviously be the 2nd Chasseurs, whose uniform was identical to that of the 1st Regiment. For the Grenadiers, however, I can either paint them up as the second Regiment (same uniform as nhe 1st Grenadiers), OR as the short lived (1810 - 1813) 3rd (Dutch) Grenadiers a Pied in their white uniforms with crimson facings. Both choices are depicted below. The 2nd Regiment is the correct one for Montmirail and Waterloo, and would also preserve the Greandier/Chasseur symmetry within my Guard. However, the 3rd/Dutch Grenadiers appeal my the collector side. 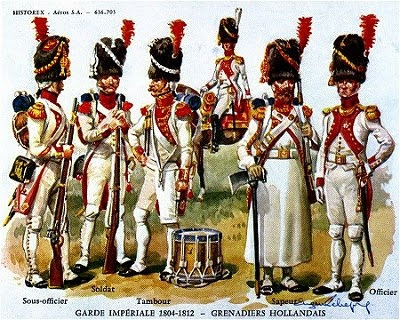 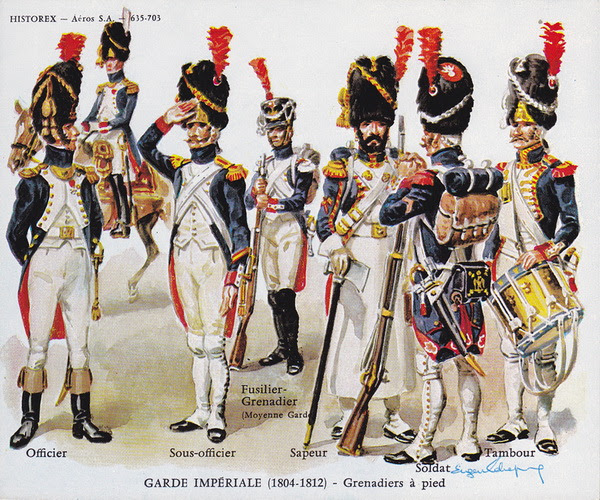 Question #2:
Should Peter paint the trumpeters of his Gendarmes d'Elite in red or light blue jackets?

The trumpeters of the Gendarmes d'Elite initially worse reversed colors, i.e., red jackets with dark blue lapels and cuffs (the collar should be red rather than the blue depicted below) - a bit reminiscent of the uniform of the trumpeters of the pre 1810 Horse Carabiniers, actually. Circa 1808, they changed to the uniform pattern used by most of the trumpeters of the Imperial Guard cavalry units, namely light blue jackets with crimson facings. Although this uniform is usually depicted paired with the chapeau, it appears that was also worn with a (black) bearskin, which is how my figures would be painted. Regular readers will know of my fondness for reversed colors, but the other uniform is snazzy too, and reinforces the notion that these are Guard cavalry! It is also again the correct uniform for Montmirail and Waterloo. 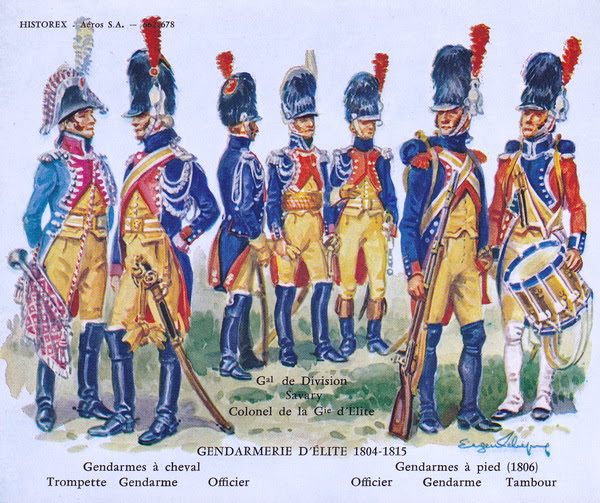 
If I were some other blogger, I might have a give away (a "poll prize", as it were) to spur participation in the poll, but I'm far too thrifty for that! While you're considering your votes, here's a little mood music from the period:


Looking forward to your feedback,

Peter
Posted by Gonsalvo at 7:54 AM