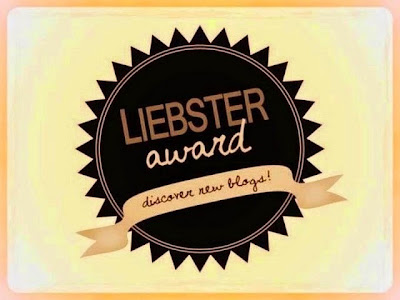 The Liebster Blog Award has resurfaced in wargaming circles, and Jon at the Paluose Wargaming Journal has kindly nominated Blunders on the Danube for a Liebster Award. Thanks, Jon!

Actually, this is my second time around with the Liebster, which I encountered previously in November 2012.  It is in some ways akin to a Ponzi scheme, LOL! As I observed last time, as there is no cost to anyone aside from their time, and it may result in discovering some interesting new blogs to follow. The blogs that I, in turn, nominate, are to copy and paste the award to into their blog linking it back to the person who nominated them (Blunders on the Danube).Part of the ritual may include answering a handful of questions, which may be changed by the nominator as desired.

Pass the award to your top 11 blogs with less than 200 followers by leaving a comment one of their posts to notify then that they have won the award and listing them on your own blog.  I think that eleven is more than a bit over the top, as the nominees would exceed 10,000 by the 4th generation! the previousd iteration suggested nominating five blogs. As I have previously nominated five back ibn 2012 (see above), I'll limit myself to three nominations this time around.

Sit back and bask in the warm fuzzy feeling that comes that knowing you have made someones day!

There is no obligation to pass this onto someone else but it's nice if you take the time to do so.


Jon's questions were as follows, and they are at least as good as any that I might think of:

1. Why did you start blogging?
Like Jon, I had (and have) a website (Gonsalvo.com) dating back to circa 2005, but  a blog is much easier to do, as well as cheaper. It is also more interactive. My blog has lead me to new contacts all over the world!

2. If you could change one thing about the wargaming hobby, what would it be?
Standardized basing! I loathe rebasing. Actually, the growing trend towards (relatively) basing independent rules is one answer to this decades old dilemma!

3. Do you read Battle Reports and what makes them inviting to read?
Oh yes, definitely; I write quite a few as well. Things that m\ake a battle report enjoyable to me are a strong sense of  narrative, a healthy sense of humor, and some insight as to how the rules and/or players influenced the unfolding of the drama.

4. Is figure painting a chore or pleasure?
Both, of course! At this point, I have painted well over 12,000 25/28mm figures, as well as any number of ships, etc. My friend Joe once said, in a response to my stating that I would eventually cut down on my painting as I neared retirement  "They'll have to pry the paintbrush from your cold , dead hands." LOL! I enjoy painting the most when a new painted unit rolls of the table. I enjoy it the least when a lot of gluing or assembly are required prior to taking paint to lead!

5. Napoleon once was quoted as saying he preferred a general that was lucky over skilled. In gaming, are you lucky or skilled?
Lucky, for sure!

6. Could you limit your gaming and collecting to one period and one size? If so, what?
Yes; 25/28mm Napoleonics; what else? Still comprises 60% of my collection, all the spaceships I've painted recently to the contrary! Still, I'd miss my other periods beyond doubt - Ancients, Late Medieval/Renaissance for sure! I did decide long ago to stick to one scale - 25/28mm.

7. How do you deal with burn out?
What's that?  :-)
Seriously, time away from the hobby, read a new book, switch periods (not the same as a *new* period, usually) , and/or plan a convention or other big game!

8. If you could only buy from one miniature company from now on, which one would it be?
Old Glory, hands down!  Although not without some flaws, their breadth of coverage of historical periods and their fantastic value for the dollar makes this no contest for me.


Now on to nominating a few blogs for the award myself; in this case, each blogger has fewer than 100 followers. All three are deserving of more. Pay them a visit and consider following those of interest:

And the Nominees are...


1.) Light Bobs and Paint Blobs
Jason doesn't post terribly often, but what he does post is worth reading, and especially, looking at! Past posts feature some of his spectacularly painted troops, including English Civil War, War of the Roses, American Revolutionary war, American Civil War, and 7 Years War.

2) This Life in Lead
Lawrence's blog has featured the gradual painting of his awesome 28mm Napoleonic Spanish army for the past year or more, with the most recent post being a parade of the entire completed project. If you thought you'd never want to own the Rodney Dangerfield ("I get no respect!") of Napoleonic armies, these units are likely to convince you otherwise!

3) My Evergrowing Fleets
Despite the title [and Mateus has a heck of a lot of beautifully painted Sci-Fi fleeets, as well as a (free) set of rules he authored for same], his more recent posts chronicle the efforts of this Brazilian wargamer to build up 25mm Napoleonic armies for Black Powder, using plastic figures.