The 2nd (Coldstream) Guards is the oldest regular regiment in continuous service in the British army, Its origins date back to the English Civil War. It was originally raised as a regiment in the New Model Army by General Monck in 1650. During the Revolutionary and Napoleonic Wars, the Regiment saw service in Egypt, fought at Copenhagen in 1807, and was sent to the Peninsula from 1809 on. There it participated in the battle of Talavera as well as the Sieges of Ciudad Rodrigo, Badajoz, Burgos and San Sebastian, the battles of Fuentes de Onoro, Salamanca, Vittoria, the Pyrenees, Bidassoa, Nive, Nivelle and the investment of Bayonne. The 2nd battalion of the regiment participated in the ill-fated Walcheren expedition in 1809.
During the 1815 campaign in the low countries, the regiment fought first at Quatre Bras, where unlike the 1st Foot Guards, it was not heavily engaged. . At Waterloo, the regiment was famously part of the defenders of the Hougoumont chateau. Its losses that day were 348 killed and countless more wounded - extremely heavy! 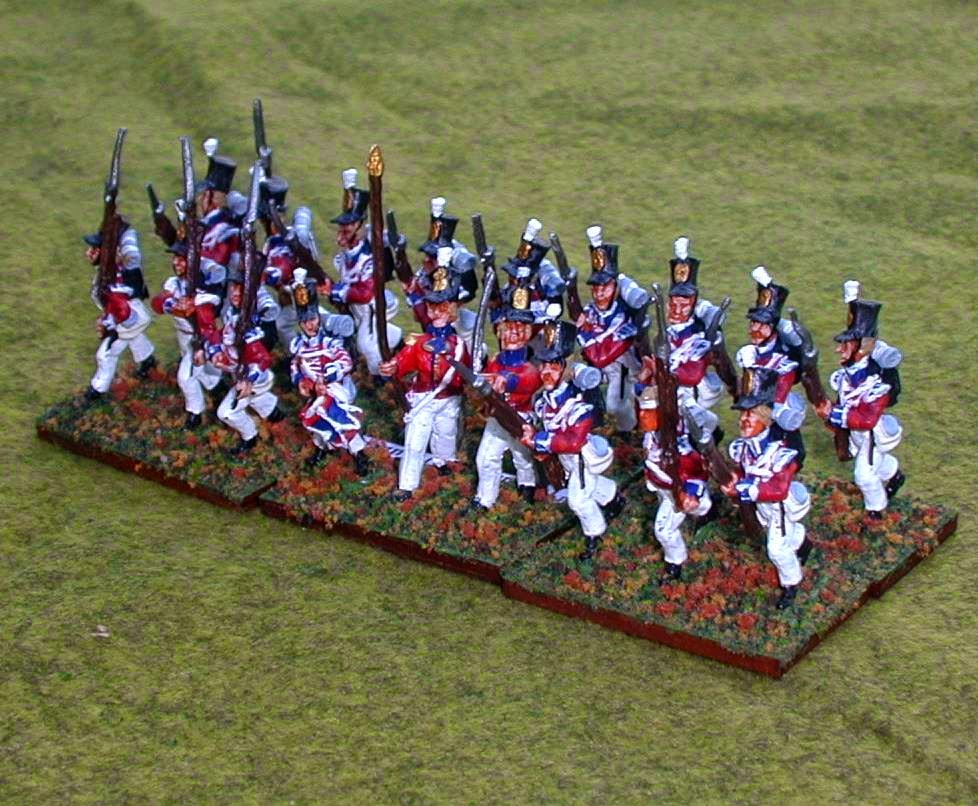 The 2nd (Coldstream) Guards - 28mm Old Glory Figures. I was uncertain as to whether all the companies should wear the white plumes of Grenadiers (as in the Fusilier regiments), but looking at this re-enactors website, it appears the usual company plume distinctions were preserved (verified); I will have to correct that. 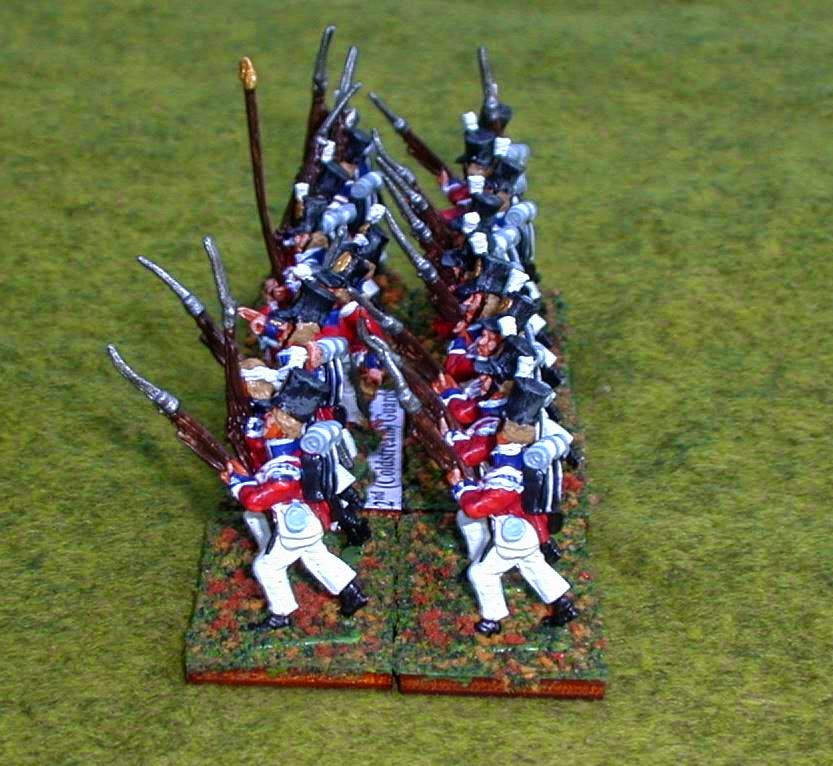 I have painted all the companies with shoulder wings, which I believe is correct*, and for the Guards, the wings are in their dark blue facing color, rather than the red used by the flank companies of Line regiments. * see comments below - further research shows that the wings were  indeed limited to the Flank companies, although the 8 center companies had broad dark blue shoulder straps piped white. 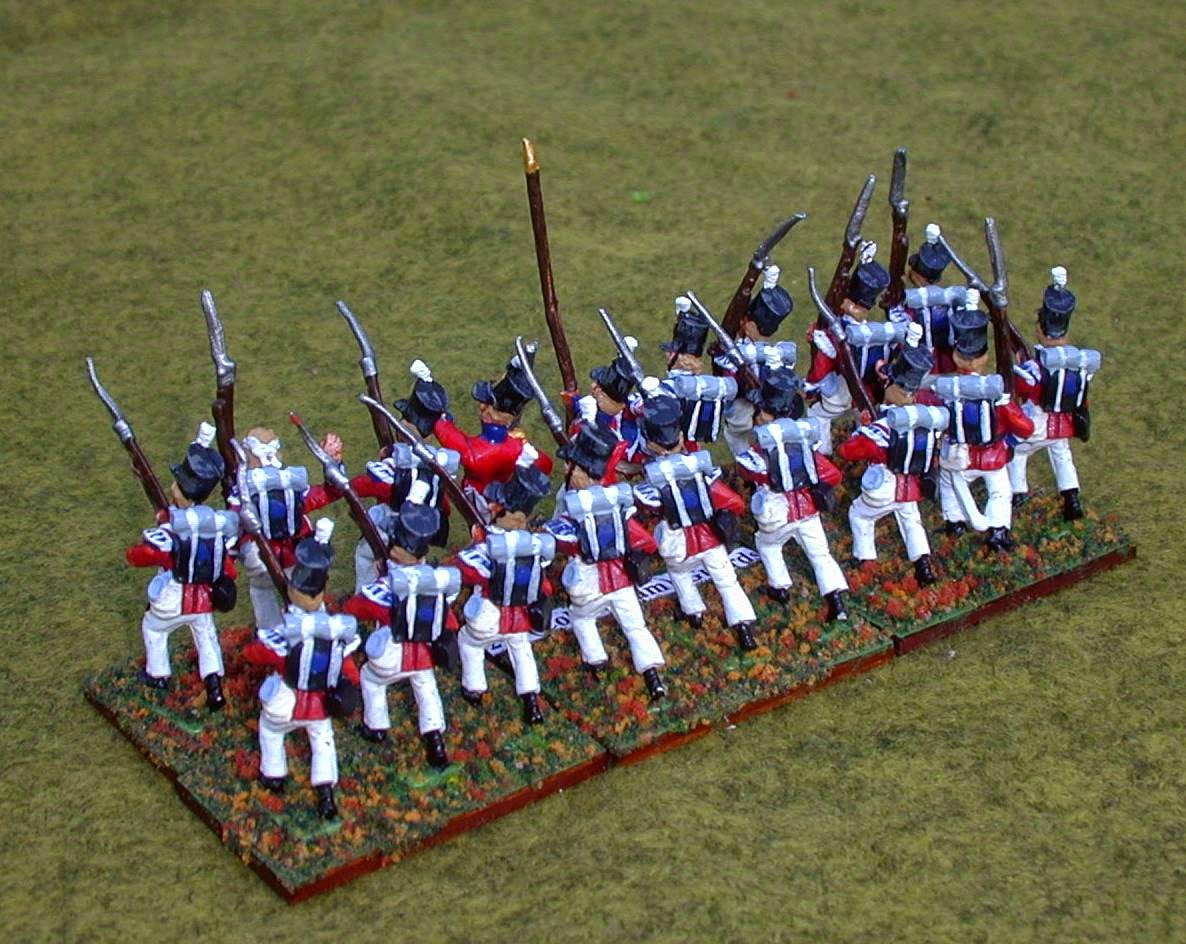 I need to order some more GMB flags - the Foot Guards Colors were unique in that the design patterns of the King's and Regimental colors were reversed, with the Regimental colors having the overall Union flag design, and the King's colors being crimson. To make things much more complicated, there were three different versions of the King's colors for Guard regiments (Colonel's, Lt. Colonel's, and Major's), and often even duplicates of these patterns due to the wear and tear caused by the ceremonial duties of the Guards. The Regimental flags were even more abundant, one per company, each with different badges/emblems upon them. Despite this profusion of designs, only one Crimson and one Union pattern flag were carried by a battalion in the field at any one time... thank goodness! 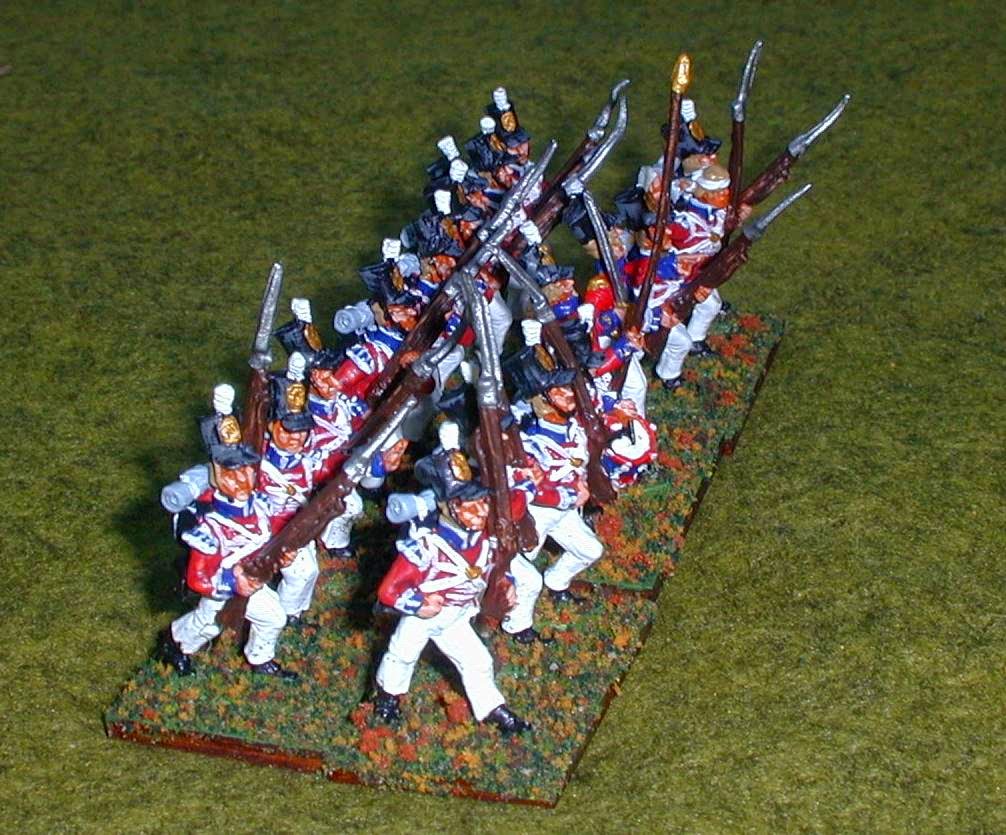 I have chosen to paint the regiment with the white pants worn for dress occasions, as a way of making the Guards stand out more easily on the wargames tabletop. 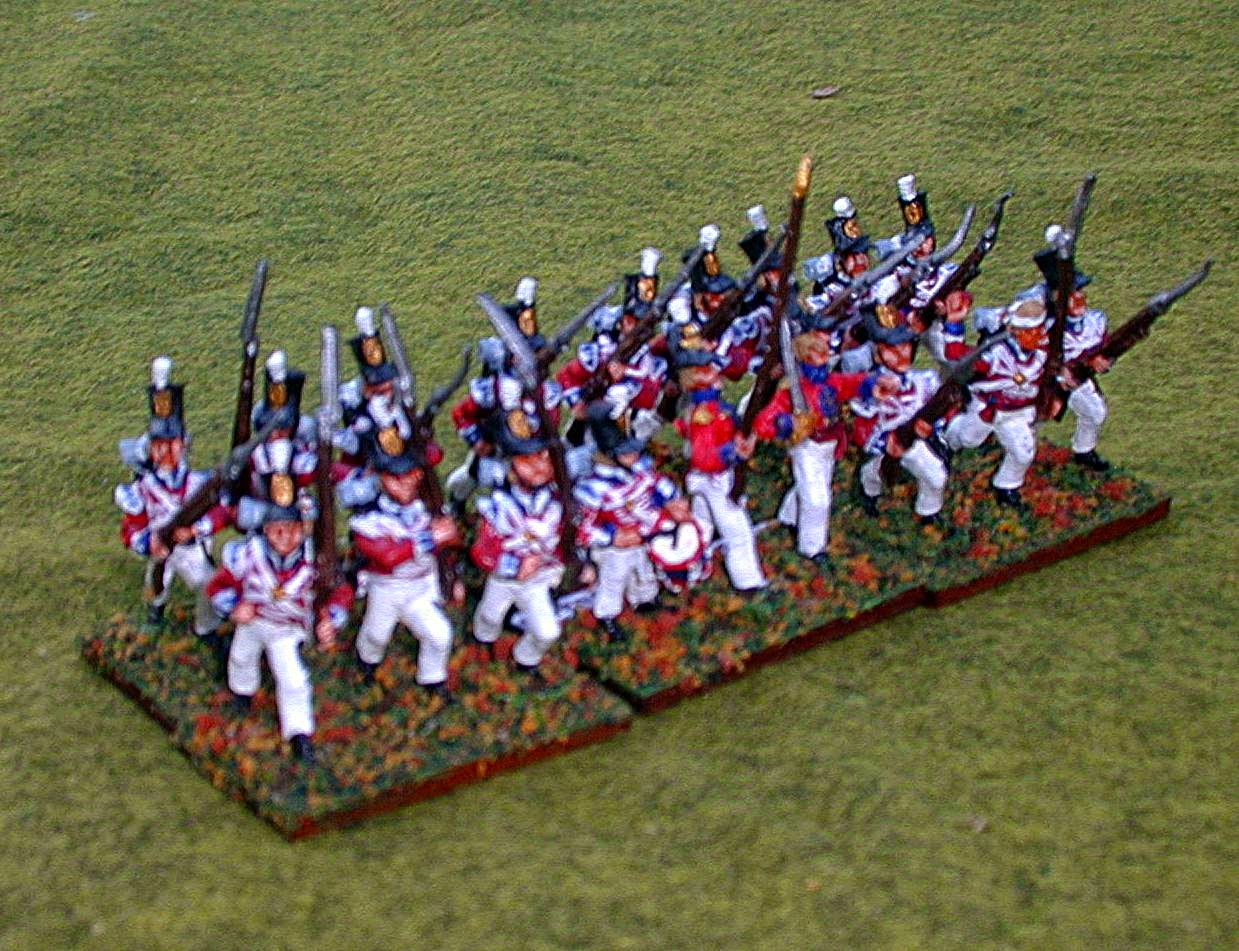 The motto of the Coldstream Guards is Nulli Secundus (Second to None) which is a play on the fact although that the regiment was numbered as the 2nd Foot Guards, its history of continuous service as is longer than that of the First regiment.

With the addition of this unit, my British Napoleonic army is now up to almost 300 figures, and my total Napoleonic collection now exceeds 6,000 figures! It will probably top out at somewhat under 7,000 eventually.