Lancashire in the Raw

Lancashire Games has a 15% off sale until the end of this month (January); I took advantage of the sale and placed an order on January 9th; the first half of the order arrived 1/`19, and the seciond half yesterday; excellent turn around time. the sale applies to pretty much everything. With the discount, a pack of 4 28mm Infantry is $5.42, about $1.35 a figure. However, if you order them in battle Packs of 16 (includes command figures), a pack on sale is $20.84. about $1.30 a figure. But wait, there's more... if you order 4 or more Battle Packs the price (on sale)  drops even further  to $18.06 a pack or about $1.13 a figure. The bad news is the overseas shipping - at 40% that's a real OUCH, but the multiple discounts above keep the price within reason.

You don't see much discussion of their ranges, and the pictures on their website are fairly poor, so I thought I'd post some pictures of the figures I received "in the raw" as it were, before they are even primed. There was a modest amount of flash on almost every figure, but that was easily removed. the size of the figures is similar to Old Glory 25's, I'd say, just a bit chunkier. All packs have a mix of poses. I ordered a total of six battle packs - 4 of Prussian Landwehr and two of  Prussian Grenadiers (wearing their tall plumes - yay, one of my motivations for ordering from this manufacturer in the first place!), plus 2 Prussian Generals and a few single packs to fit my organizational needs.

Although the storm Tuesday was much less than expected here in Western CT, it still kept us in all day, so I put the time to use prepping the figures and getting them ready for priming. Now I just need it to warm up to at least 30 degrees so that I can prime them in my garage! If I do that after the cars have been out and returned, the engine heat warms the attached garage up into the 50'/s. 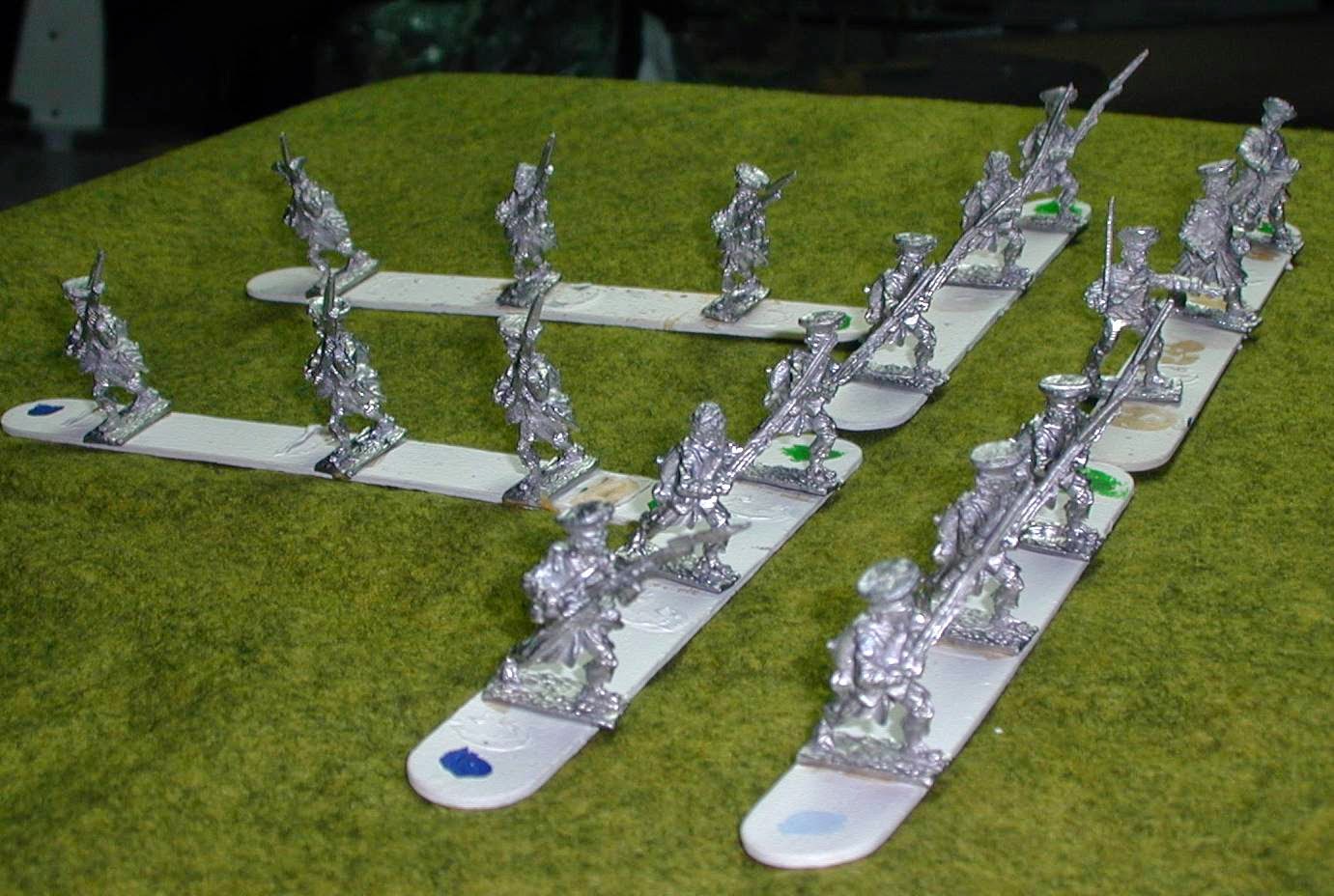 First up an 18 figure unit of Landwehr. I culled all the "Advancing" loses from the 4 BP's plus, so this outfit will have pretty uniform poses, with a few men lacking hats.

Another view. I glue my figures to tongue depressors before priming and painting. I reuse them (ick, not after examinations, but with multiple crops of figures) many times before discarding the old ones for new sticks. The green blotches of paint indicate that this will be a Westphalian Landwehr battalion, with green facings. 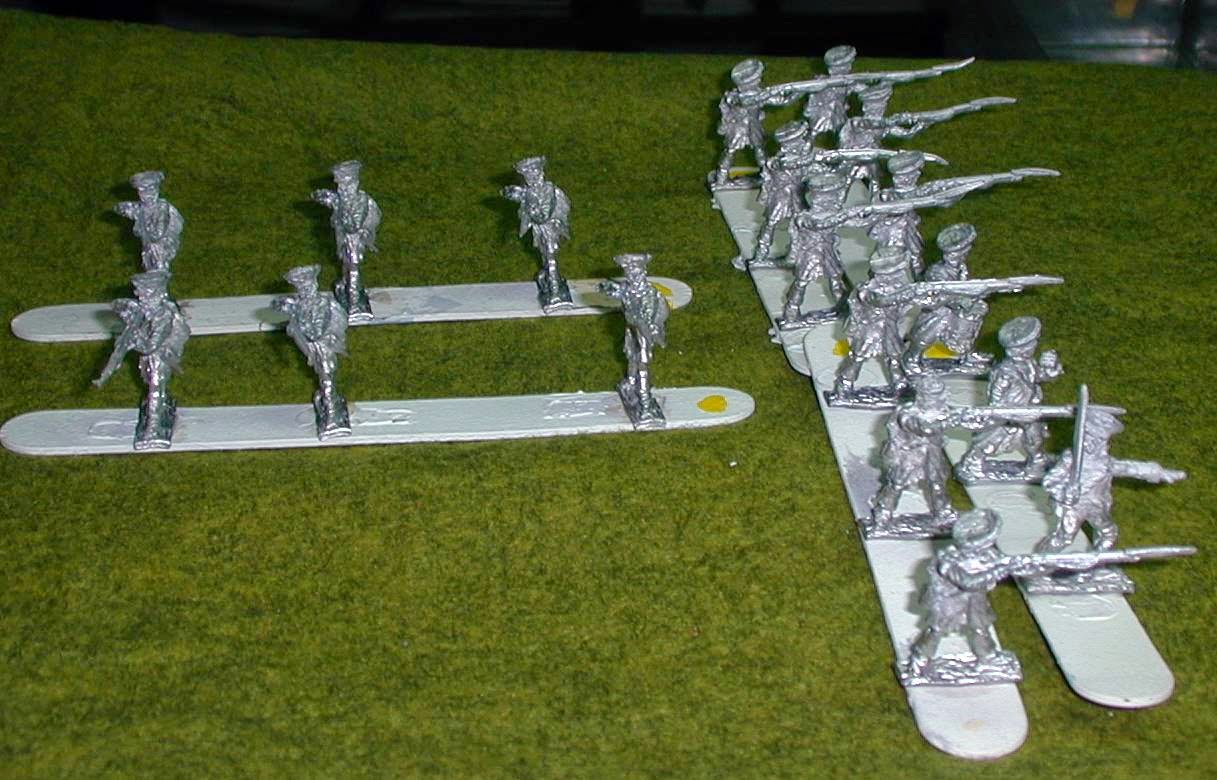 Here's the second unit of Landwehr; this one has the men in a "firing" position. I know some swargamers don't like this position due to tabletop and storage issues, but I like some of my infantry in firing poses. I actually ordered my extra Landwehr figures in "Firing poses", which worked out well. 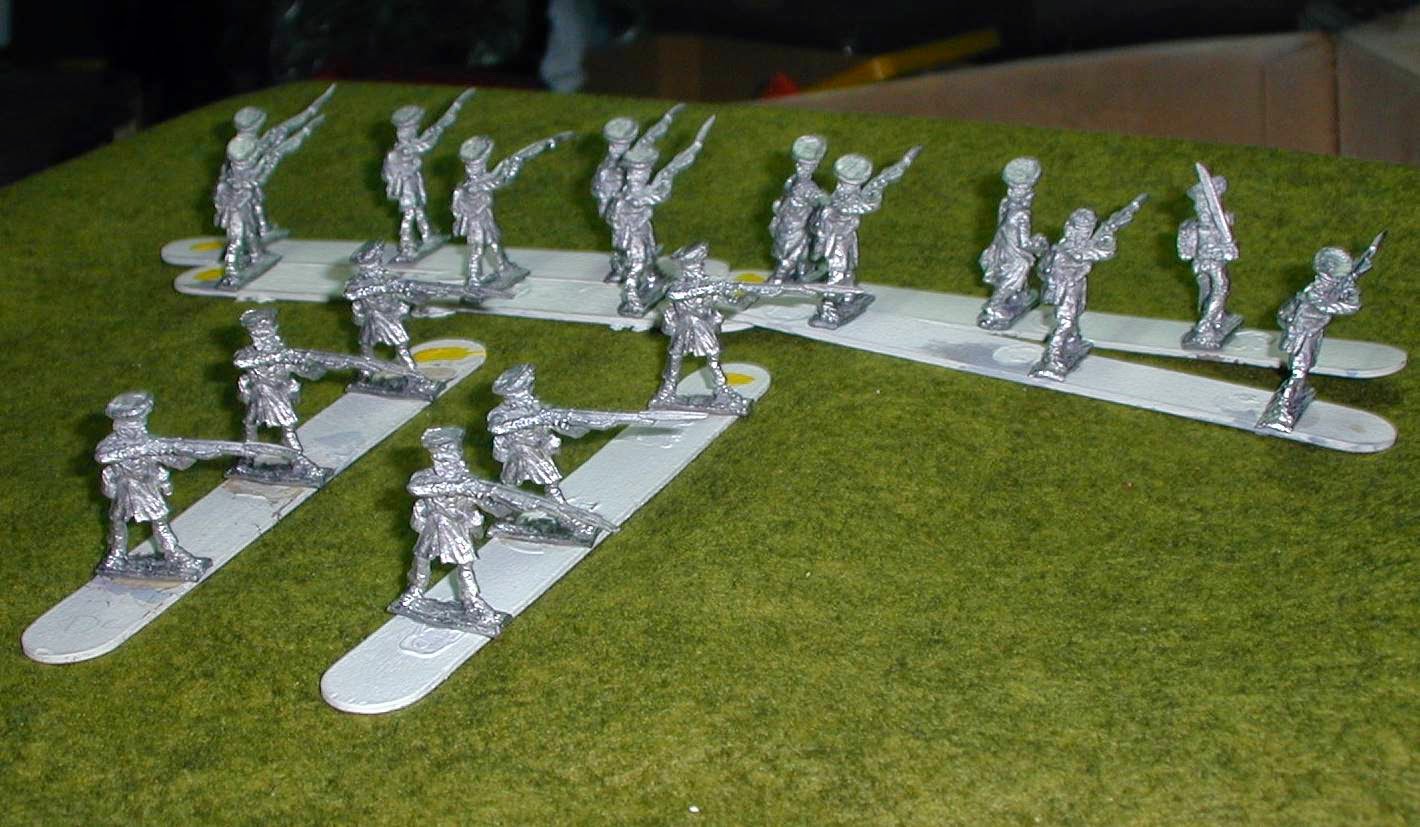 Another view of the 2nd unit; the yellow splotches indicate this will be a Silesian outfit, with yellow facings. 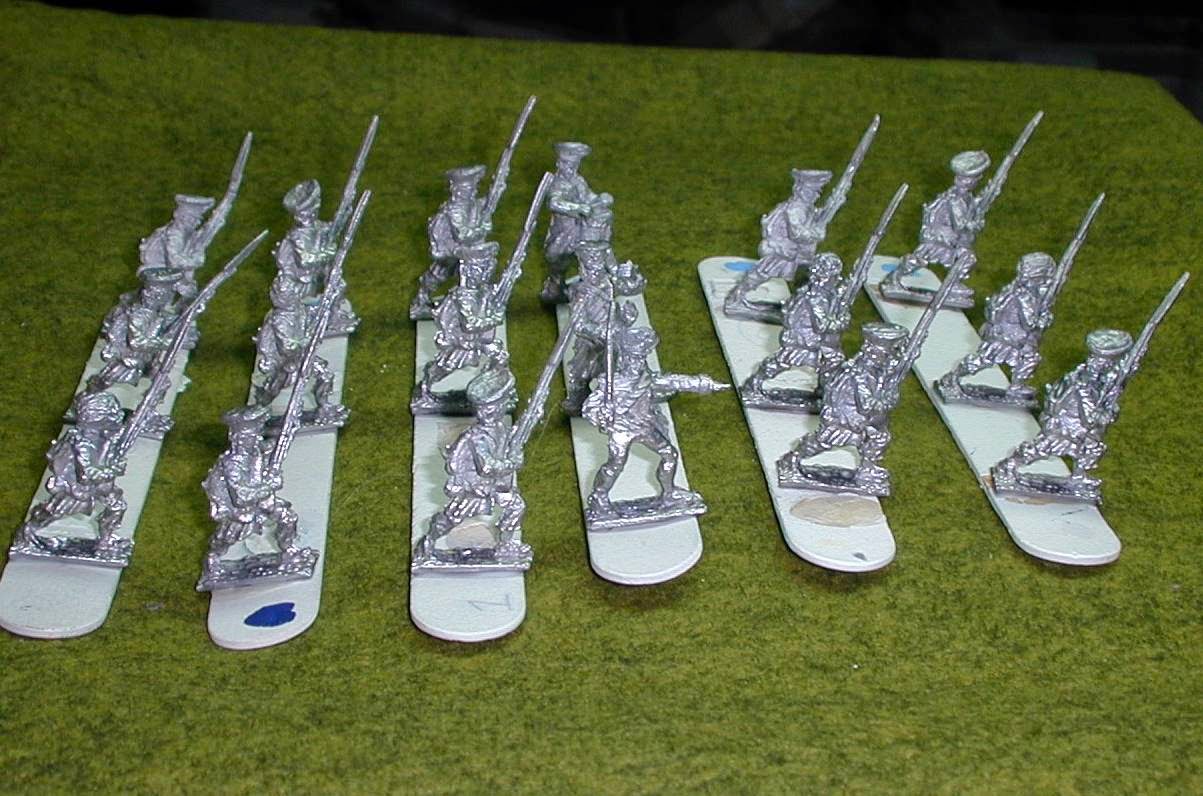 The third unit is again in a fairly uniform "advancing" pose. The standard bearer is cast open handed and will need a Florist's wire flagpole added before priming. 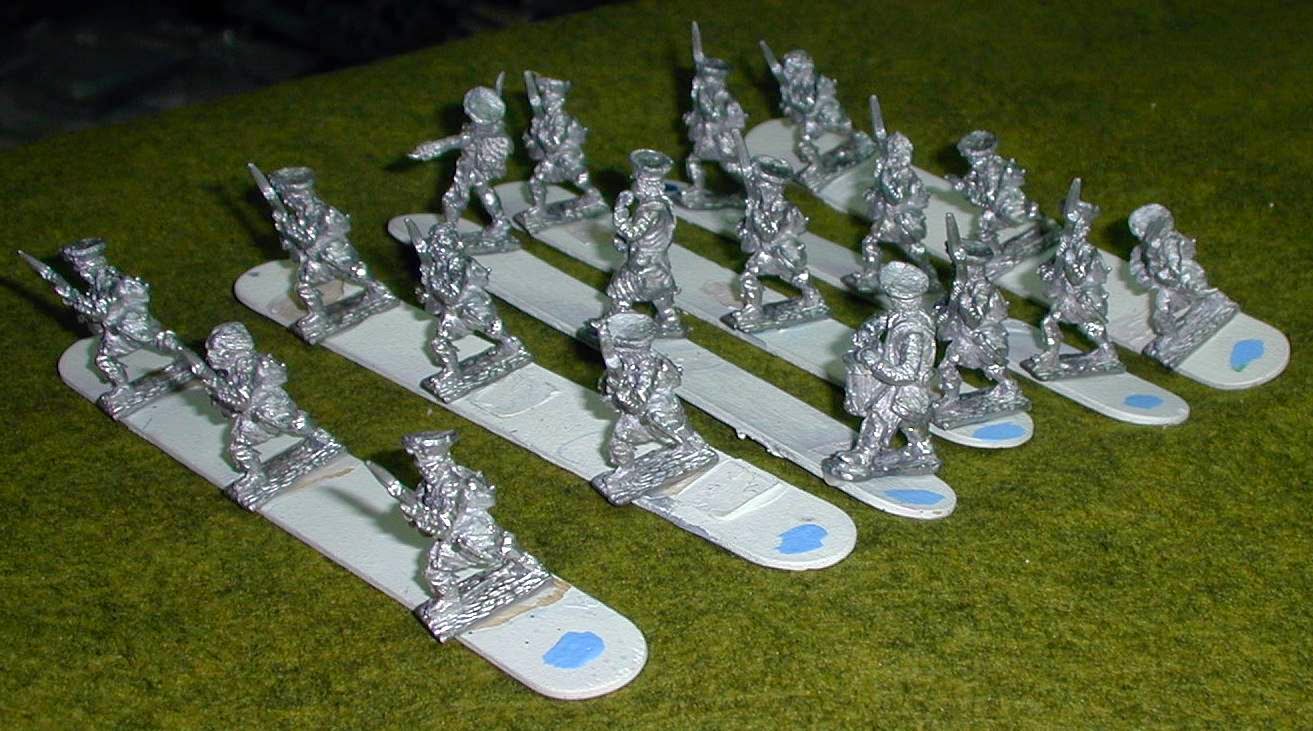 The light Blue splotches indicate an Elbe unit, with Light blue facings. The figures have nice details in the folds of the Litewkas and pants, which should make painting them easy. They also have a nice raised Landwehrkreuz at the front of their Schirmutze caps. 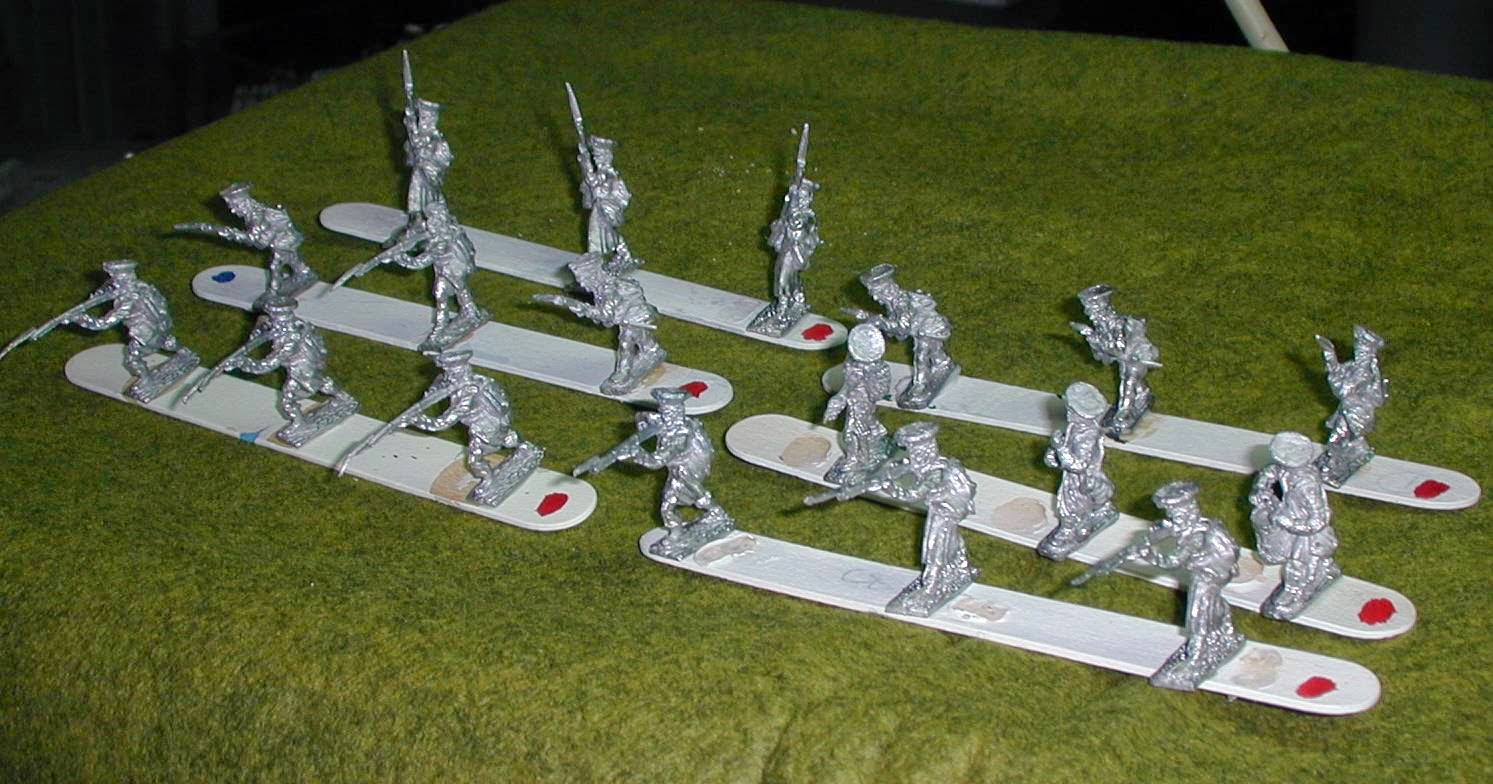 Here's the final Landwehr unit; this one had dark red splotches (Madder or Crab Red), indicating a "Rhein" department unit. 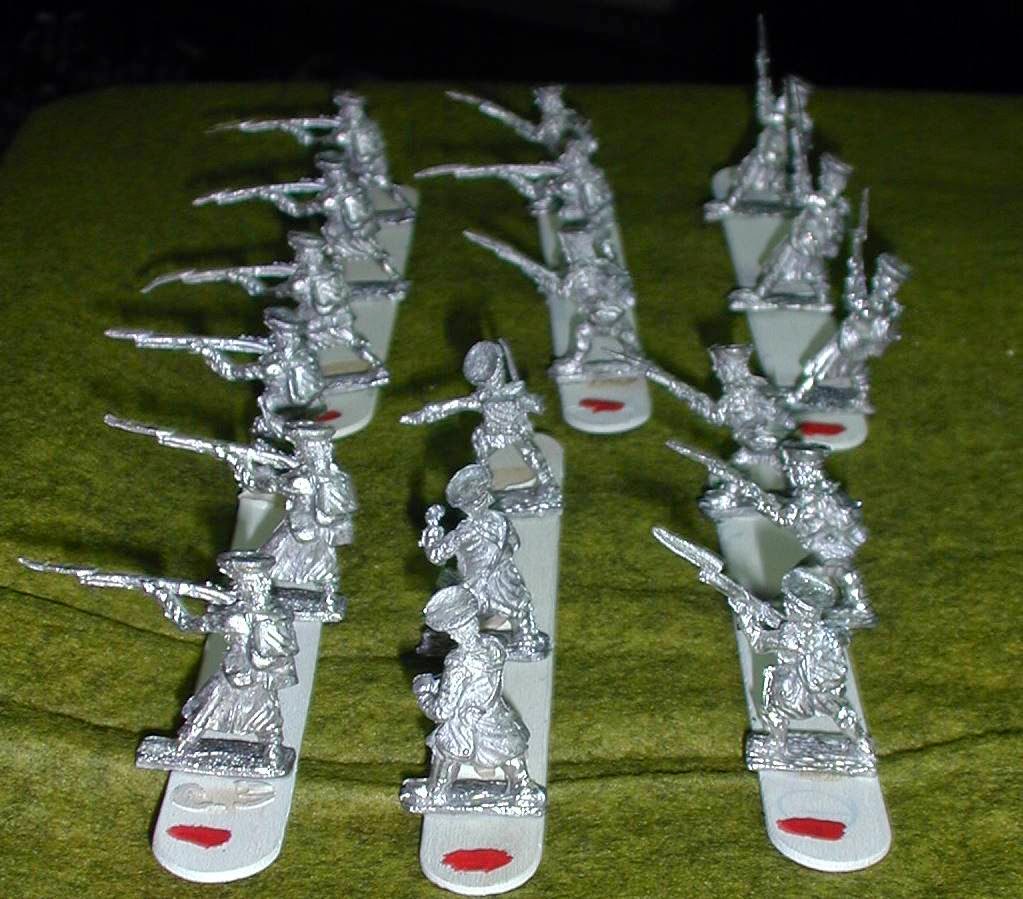 This unit has a cacophony of poses... perhaps appropriate for a very raw unit. The Litewkas of these figures vary in length considerably, just as they did in real life. 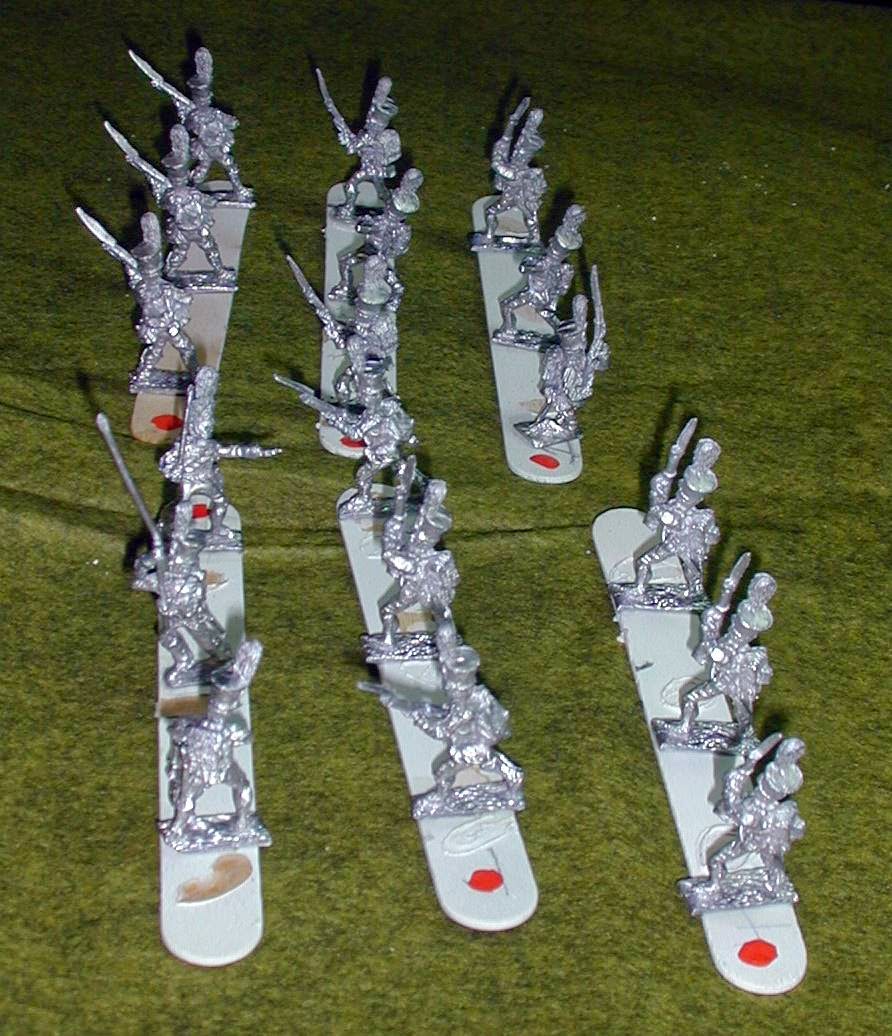 Now we move on to the Grenadiers. Without their plumes, it is almost impossible to tell tell the Grenaiders from the Prussian Line infantry. Lancashire is the only manufacturer I know of who currently makes 28MM Prussian Grenadiers with their tall plumes; thanks to my friend Steve in Australia for pointing them out to me a few years ago!

The orange-red splotches indicates these Grenadiers will be part of an East Prussian unit. 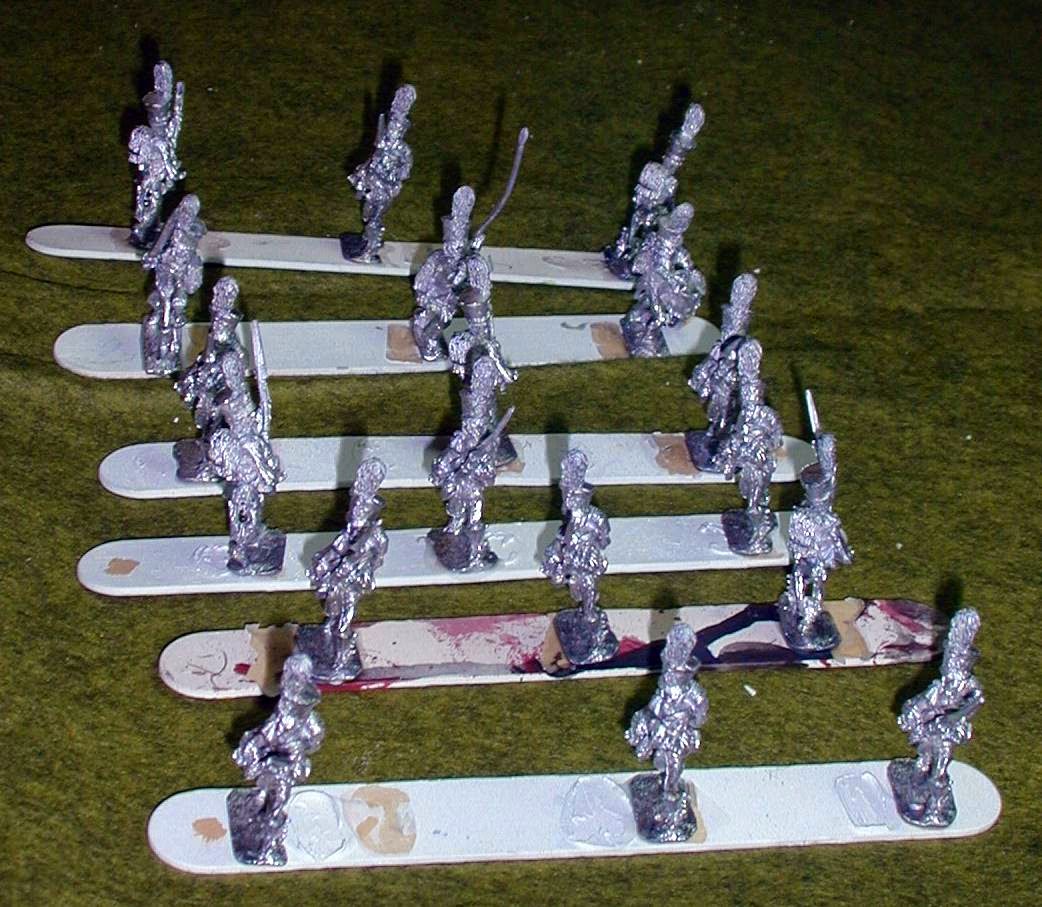 The second Grenadier unit has a bit more variety of poses. No splotyches indicates this will be a Pomeranian unit (white facings). 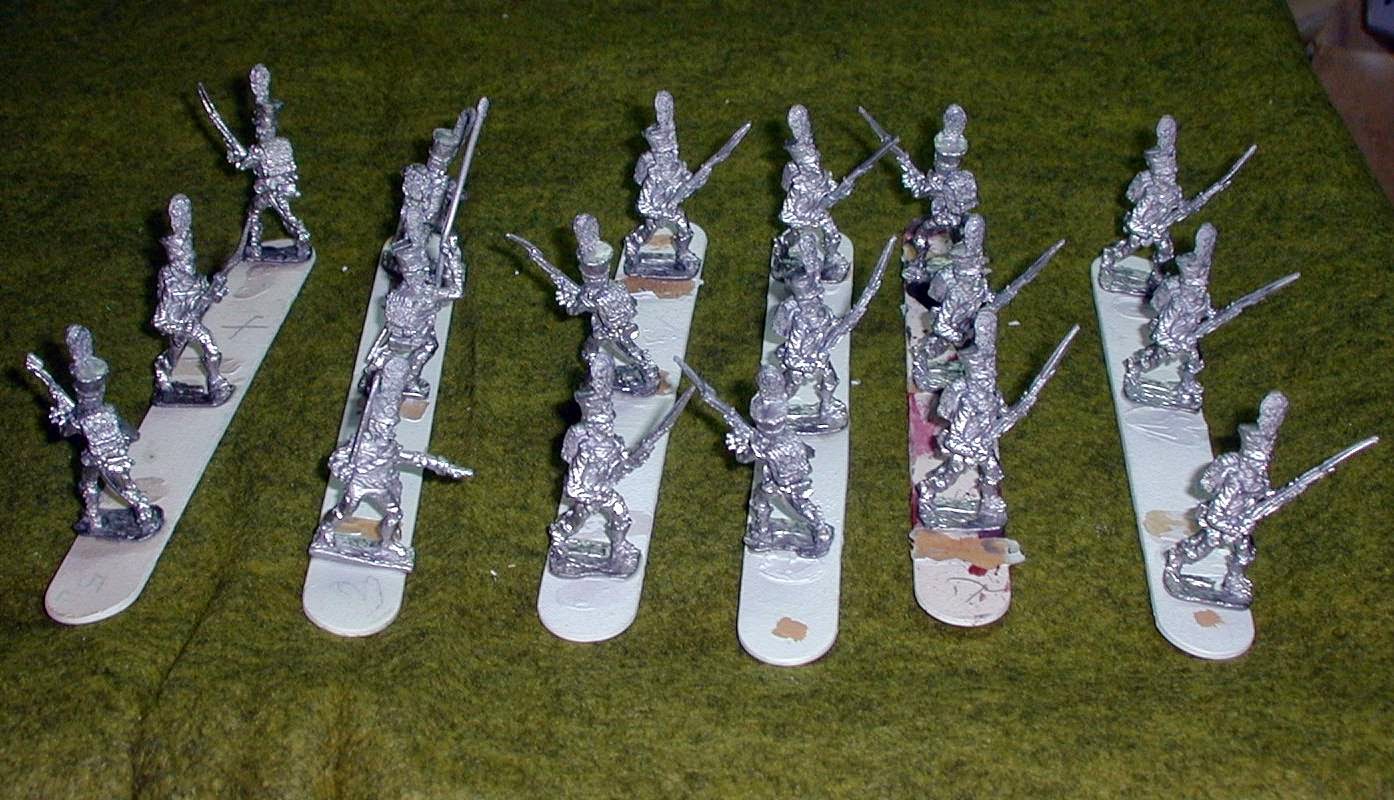 The Grenadier Standard Bearers are cast with alloy flagpoles; I will probably cut them off and replace with wire. 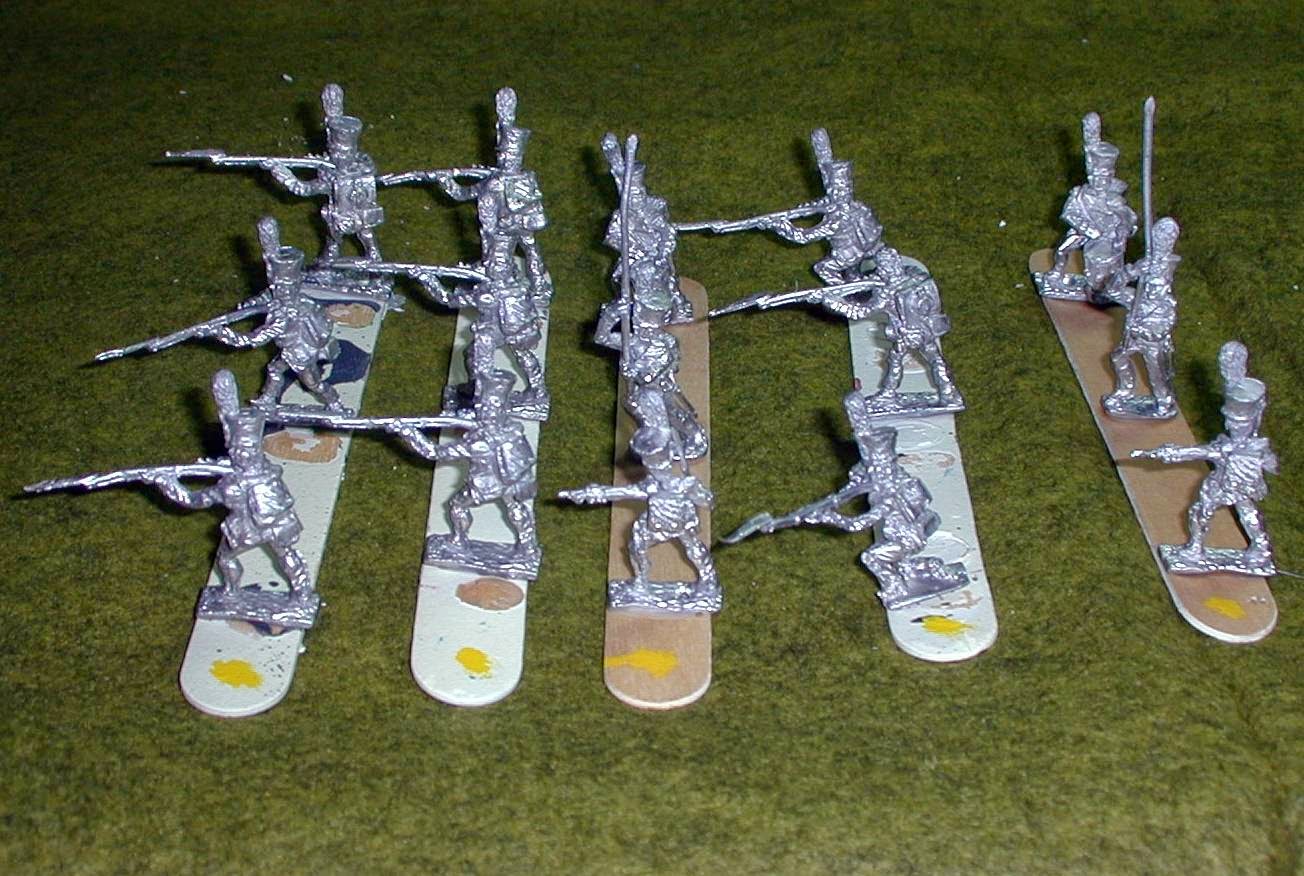 The final unit is in predominantly firing poses; the first 4 stands will form a smaller unit, and the extra command stand will be be used to bring an exiting (Minifigs) Grenadier  Battalion up to 4 stands. 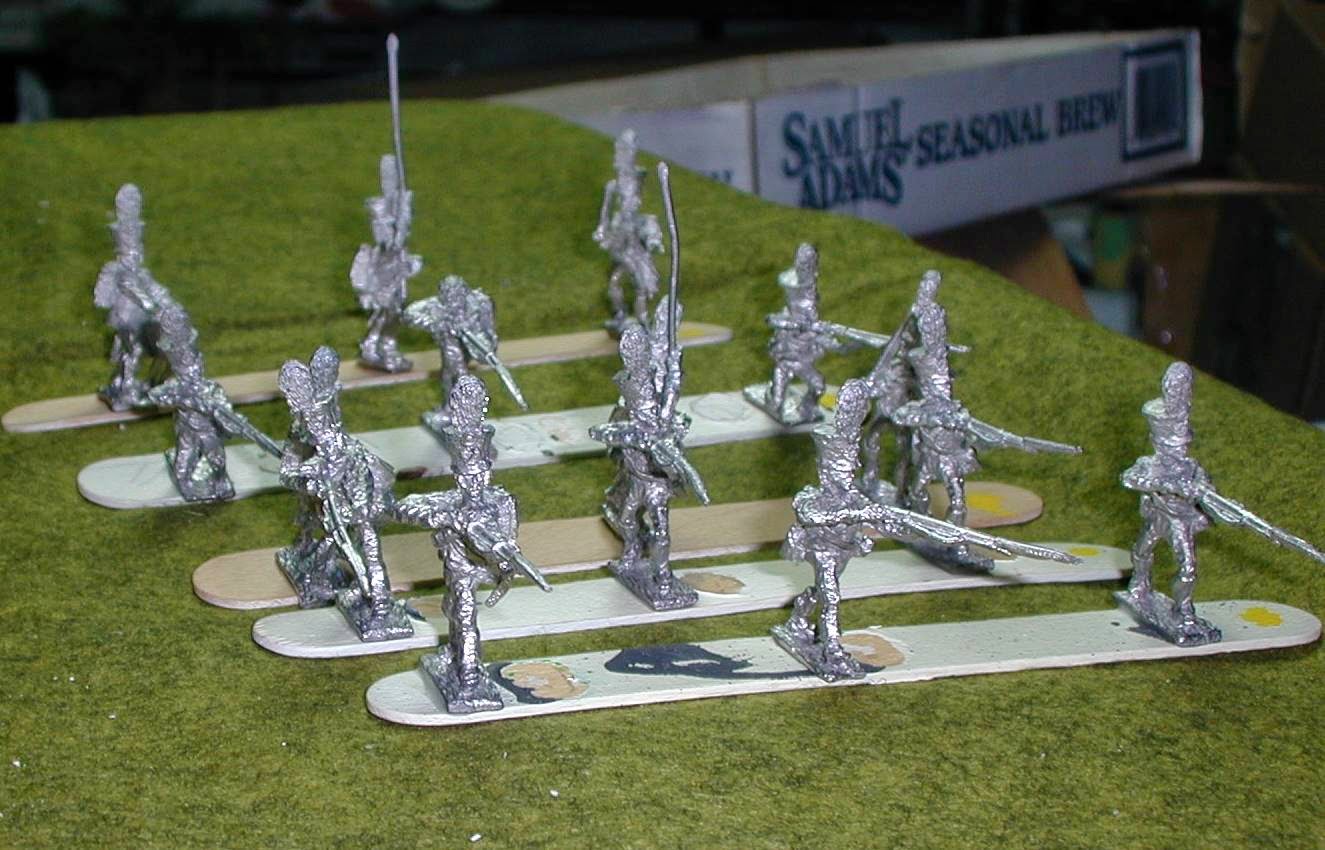 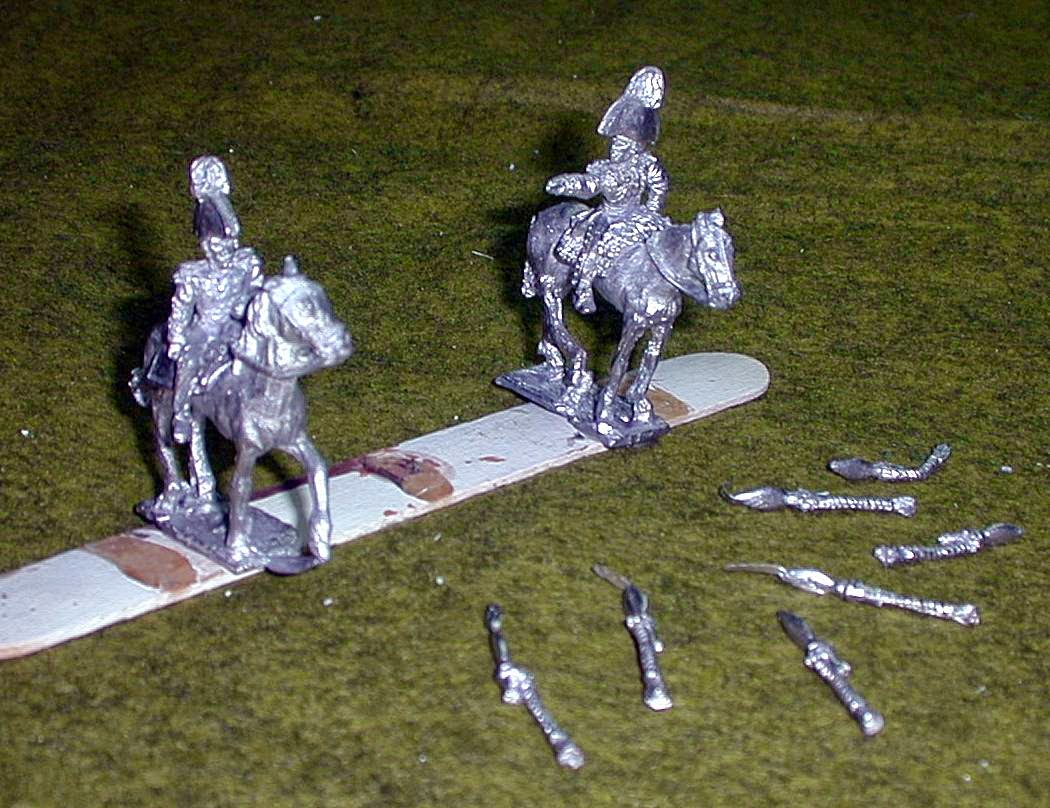 A pair of Prussian Generals by Lancashire Games. The other objects are finials with cords for the standard bearers; once again these will probably work better with wire flagpoles. I may or may not use them. 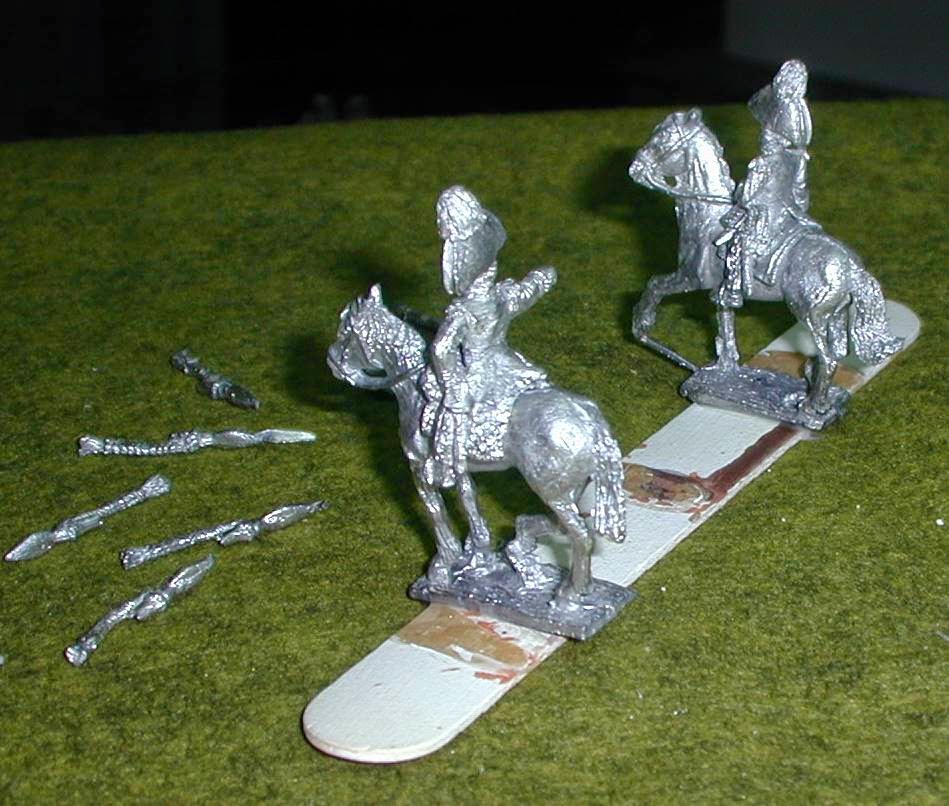