Last of the Line head from Ligny to Waterloo

As the last few hours drain away on this, the 200th Anniversary of the battle of Waterloo, I post the last of the Prussian Infantry that will appear at Ligny (and then, late in the day, at Waterloo itself, if history repeats itself half as much as the Abba song!) 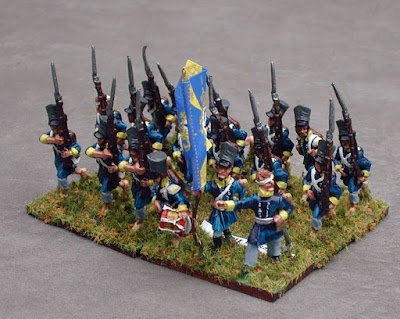 This is the 3rd Silesian Infantry Regiment, I.R. #13, As one of the "new" 1815 Line regiments, the flag is speculative at best, but it does go well with their yellow facings. 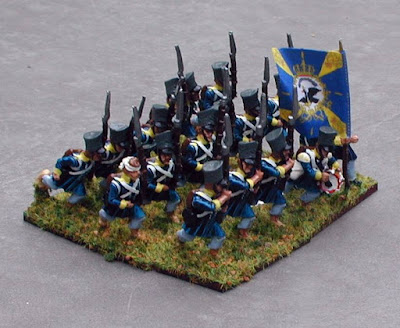 As the 3rd regiment of the Province, even their shoulder straps are yellow. Old Glory figures once again (from the "Prussian Militia Men" bag). 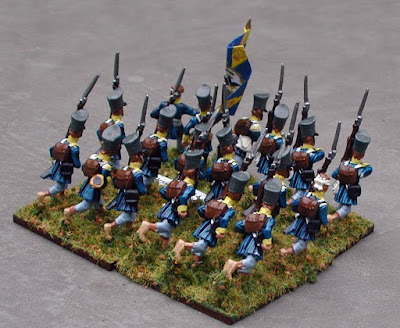 Yes James, my freind, more clogs and tattered pants for these fellows, as well as "Litewka" coats. 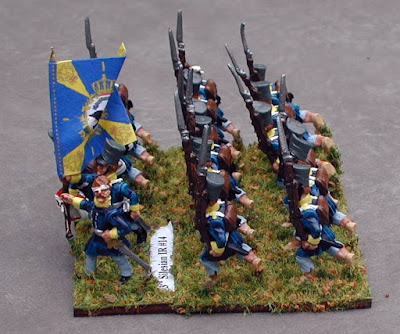 "Feldmarshal Blucher has given his word that we will appear to support Wellington at Waterloo... and so we shall!

Sorry, couldn't resist posting this Abba classic.
I spent most of the month of May, 1974, performing  and on tour of Europe with the University of Connecticut Marching Band (Baritone Horn).  The itinerary included Ingolstadt, Regensburg, Lyon, Geneva, Lucerne, Zurich, Leichtenstein, and Munich. Abba had just won the Eurovision contest with this song in April, and it was on the airwaves (and our tour buses) almost constantly that month. As a result, whenevr I hear the song, it takes me back to touring the Bavarian countryside, or the alpine roads of Switzerland. Unfortunately, I haven't been back to Europe since then, but I hope to do a Rhine River Cruise - perhaps in a few more years!
Posted by Gonsalvo at 10:06 PM