I got a pack of these Renedra assorted barrels at Historicon back about 3 years ago, and finally got around to painting them up this week... 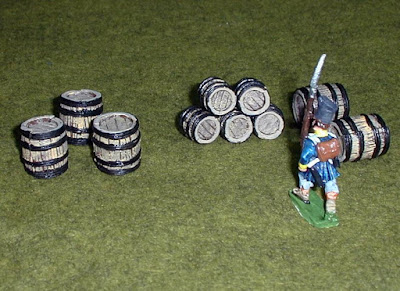 The set has 5 large and 5 medium barrels - they were dark brown plastic, so after gluing the halves together. I just dry brushed then with a light tan color., painted the hoops black, and applied a generous coat of "magic wash" all over. 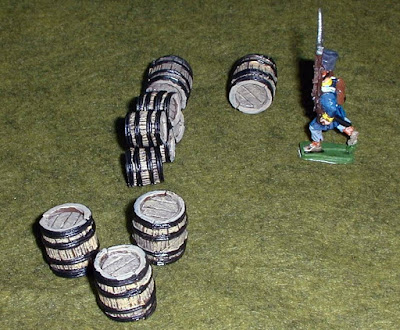 This Silesian infantry men seems to making a beeline for the barrels, doubtless hoping at least one of them is full of some good beer!  Well, actually, a lot of beer, if still full  - 117+ liters per barrel! For comparison a full size keg of beer is only 50 liters! 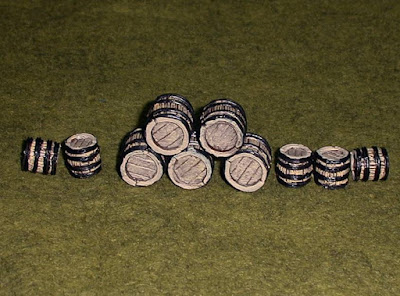 The motivation for painting them now is to use some of them as props on the bases of the windmills I'm building, which are nearing completion.

The Beer Barrel Polka
The music was written by the Czech musician Jaromir Vejvoda 1927, and later arranged by Eduard Ingris. The English Lyrics were written 1939. It became popular with soldiers of many nations during World War 2, with varied lyrics (and titles) existing in many languages. The Andrews sisters recorded a version in 1939, and it was a staple (played with amazing dramatic flair and energy) of Liberace. Elton John was even said to play it in his pub. Perhaps the best known version in the US is this recording by Bobby Vinton, a.k.a. "The Polish Prince", from 1975. It is also an unofficial theme song of my sister's alma mater, The University of Wisconsin, and almost a mandatory song at a Polish-American wedding reception.  Finally, it became a standard item in the repertoire of our drinking songs when I was playing in the Band in college. I don't think it is possible to listen to this song without smiling... and I don't even particularly care for beer myself. The only problem is that after listening to several versions last night, I have the darned thing stuck in my head!

Email ThisBlogThis!Share to TwitterShare to FacebookShare to Pinterest
Labels: terrain