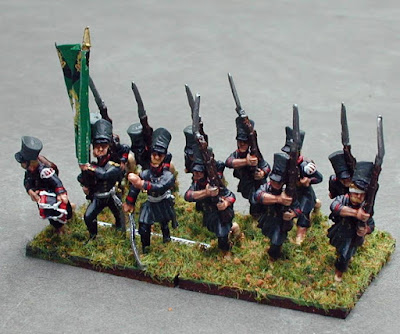 The Lützow Free Corps (Lützowsches Freikorps) was raised in February 1813, and was officially titled the Königlich Preußisches Freikorps von Lützow The C.O.was Ludwig Adolf Wilhelm Freiherr von Lützow, who had served under Major von Schill during his ultimately successful raid in 1809.

The following is from the Uniform Evolution site:

The Freikorps eventually consisted of three, four-company, battalions; five squadrons of cavalry and two batteries one horse and the other light foot.  Eleven of the infantry companies were Musketeer; the other, which was part of the 2nd Battalion, being "Tyrolean Jager". This unusual unit was raised by Lieutenants Riedel and Ennemoser, the latter having fought with Andreas Hofer in 1809. Their men were drawn from the Tirol and were dressed in the style of the Austrian Jagers. Of the cavalry, three squadrons were Hussars, 1st, 4th and 5th; the 2nd was mounted Jager and the 3rd were Uhlans. In June 1813, the 1st Squadron were converted to Uhlans. In the reorganization of March 1815, the Musketeer Battalions formed the new No. 25 Erstes Rheinisches Infanterie Regiment; three squadrons joined the 6th Uhlan Regiment and one squadron went to the 9th Hussars; the mounted Jager squadron was disbanded.

The Musketeers were dressed in a black Litewka, the collar, Polish cuffs and shoulder straps of which were piped in red; the buttons were brass. They had black trousers with narrow red stripes down the outside seams; they were generally worn over short black spats. The head-dress was a Fusilier shako to which could be affixed black cords and a horse-hair plume. Usually a waxed cover was worn with the shako.

The Tyroler Jager-Kompagnie were dressed in grey jackets with green Polish cuffs, collars, shoulder straps, lapels and turnbacks. Their trousers were also grey and had a wide green stripe running down the outside seams. Their head-dress was made of black felt and was modeled on the Austrian Jager pattern "Corsehut". To it was fitted a green plume, officers having a green and white feather Busch. The leather belts were blackened and a brace of pistols was carried in the waistbelt. 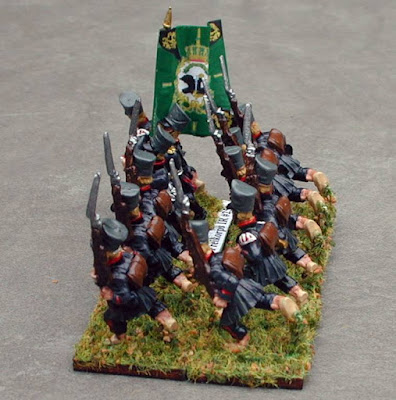 The Freikorps was raised and promoted as as a "Pan-German" unit, not a specifically Prussian one, and included volunteers and deserters from the other many German states. As such, the unit enlisted a number of students and intellectuals (and at least 2 women, serving in disguise). The most prominent of these was the young Prussian poet and dramatist Theodor Koerner. Koerner wrote a number of romantic poems and songs about the Lützowers, and the cause of the Befreiungskreig. He was killed during a raid on a French supply train at the age of 21, but his father  published a collection of his works from this time, which became very popular.

The Lützowers have also been featured in (German) film far more than we non-Germans might expect, occupying a major niche in the pantheon of German nationalism, even though they had the highest desertion rate of any unit in the army - 40%! 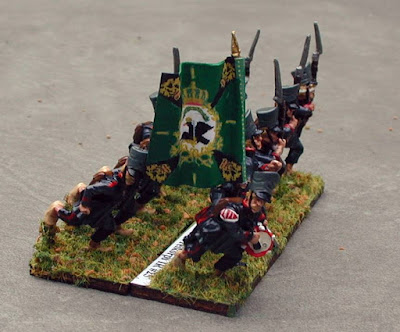 The dramatic black uniforms - even the facings are black, piped in red), have made them a favorite tabletop unit for wargamers. It has even been suggested that the colors of the uniform - Black - Red-Gold (brass buttons) inspired the national flag of the German Republic!  They evidently retained some or all of these uniforms during the Hundred Days in 1815. The flag chosen here (for 1815) is again purely decorative and unlikely  - I chose it from among the pre 1807 Prussian standards.

I used Delta Ceramcoat "Charcoal" for their black Litwekas (a very dark grey color, almost black), with highlights in CC Hippo Grey, and shading with "pure" black; I used CC Paynes Grey for the pants for some contrast - a very dark, slightly bluish grey color. With the red stripe down the seams, they look more than a bit like modern  track pants! From a painting of the Korps (and Koerner), it seems that perhaps the "wings" of the musicians might have been black with white lace instead of red. Since these Old Glory figures ("Militiamen") have clogs and tattered pants, I did without the black spats, etc! 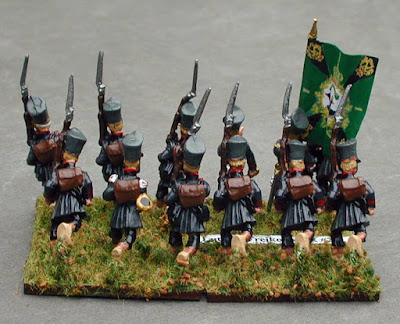 Overall, the Freikorp's raiding activities were an annoyance to the French, but not of any great military consequence. During the Armistice of 1813, the Korps marched to join the main Allied army under the safe passage terms of the agreement. They were intercepted by French cavalry. The Lutzowers nationalism and guerrilla tactics had made them particularly hated by the French in general, and Napoleon in particular, and were told the terms of the Armistice did not apply to "brigands" like themselves. The infantry was largely wiped out, although most of the Cavalry escaped. The Korps was re-raised during the winter of 1813-14, and fought with the main army thereafter. 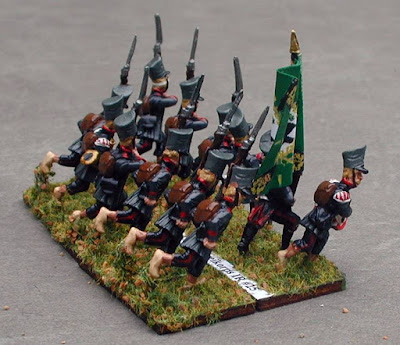 At Ligny in 1815, it was officers from former Lützower formations who saved Feldmarschal Blucher when he was trapped beneath his horse and nearly captured by the French. For more information on this famous unit, try:
History of the Lutzow Freikorps by Kyle O’Brien (Millander) 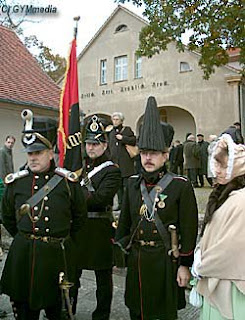 As a testament to their role in German history, there is a German Lutzow re-enactor group, a Lutzow facebook page, and many more German language sites dedicated to them.